We propose a simplified model of attention which is applicable to feed-forward neural networks and demonstrate that the resulting model can solve the synthetic "addition" and "multiplication" long-term memory problems for sequence lengths which are both longer and more widely varying than the best published results for these tasks. 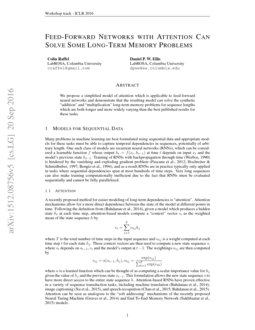 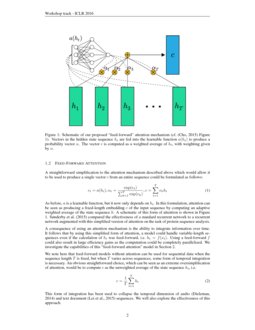 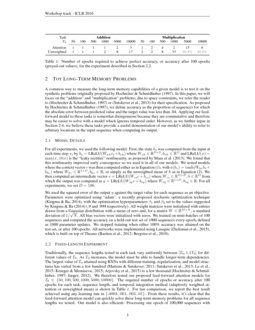 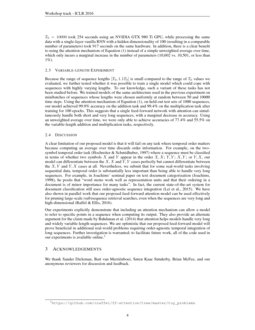 This paper is dedicated to the long-term, or multi-step-ahead, time seri...
Artem Chernodub, et al. ∙

Plagiarism is one of the leading problems in academic and industrial env...
Seyed Vahid Moravvej, et al. ∙

The idea of dynamic move chains has been described in a preceding paper ...
Kieran Greer, et al. ∙

Many problems in machine learning are best formulated using sequential data and appropriate models for these tasks must be able to capture temporal dependencies in sequences, potentially of arbitrary length. One such class of models are recurrent neural networks (RNNs), which can be considered a learnable function

. Training of RNNs with backpropagation through time

is hindered by the vanishing and exploding gradient problem

(Pascanu et al., 2012; Hochreiter & Schmidhuber, 1997; Bengio et al., 1994), and as a result RNNs are in practice typically only applied in tasks where sequential dependencies span at most hundreds of time steps. Very long sequences can also make training computationally inefficient due to the fact that RNNs must be evaluated sequentially and cannot be fully parallelized.

A recently proposed method for easier modeling of long-term dependencies is “attention”. Attention mechanisms allow for a more direct dependence between the state of the model at different points in time. Following the definition from (Bahdanau et al., 2014), given a model which produces a hidden state ht

at each time step, attention-based models compute a “context” vector

ct as the weighted mean of the state sequence h by

where T is the total number of time steps in the input sequence and αtj is a weight computed at each time step t for each state hj. These context vectors are then used to compute a new state sequence s, where st depends on st−1, ct and the model’s output at t−1. The weightings αtj are then computed by

where a is a learned function which can be thought of as computing a scalar importance value for hj given the value of hj and the previous state st−1. This formulation allows the new state sequence s to have more direct access to the entire state sequence h. Attention-based RNNs have proven effective in a variety of sequence transduction tasks, including machine translation (Bahdanau et al., 2014), image captioning (Xu et al., 2015), and speech recognition (Chan et al., 2015; Bahdanau et al., 2015)

. Attention can be seen as analogous to the “soft addressing” mechanisms of the recently proposed Neural Turing Machine

A straightforward simplification to the attention mechanism described above which would allow it to be used to produce a single vector c from an entire sequence could be formulated as follows:

As before, a is a learnable function, but it now only depends on ht. In this formulation, attention can be seen as producing a fixed-length embedding c of the input sequence by computing an adaptive weighted average of the state sequence h. A schematic of this form of attention is shown in Figure 1. Sønderby et al. (2015) compared the effectiveness of a standard recurrent network to a recurrent network augmented with this simplified version of attention on the task of protein sequence analysis.

A consequence of using an attention mechanism is the ability to integrate information over time. It follows that by using this simplified form of attention, a model could handle variable-length sequences even if the calculation of ht was feed-forward, i.e. ht=f(xt). Using a feed-forward f

could also result in large efficiency gains as the computation could be completely parallelized. We investigate the capabilities of this “feed-forward attention” model in Section

We note here that feed-forward models without attention can be used for sequential data when the sequence length T is fixed, but when T varies across sequences, some form of temporal integration is necessary. An obvious straightforward choice, which can be seen as an extreme oversimplification of attention, would be to compute c as the unweighted average of the state sequence ht, i.e.

This form of integration has been used to collapse the temporal dimension of audio (Dieleman, 2014) and text document (Lei et al., 2015) sequences. We will also explore the effectiveness of this approach.

A common way to measure the long-term memory capabilities of a given model is to test it on the synthetic problems originally proposed by Hochreiter & Schmidhuber (1997). In this paper, we will focus on the “addition” and “multiplication” problems; due to space constraints, we refer the reader to (Hochreiter & Schmidhuber, 1997) or (Sutskever et al., 2013) for their specification. As proposed by Hochreiter & Schmidhuber (1997), we define accuracy as the proportion of sequences for which the absolute error between predicted value and the target value was less than .04. Applying our feed-forward model to these tasks is somewhat disingenuous because they are commutative and therefore may be easier to solve with a model which ignores temporal order. However, as we further argue in Section 2.4, we believe these tasks provide a useful demonstration of our model’s ability to refer to arbitrary locations in the input sequence when computing its output.

For all experiments, we used the following model: First, the state ht was computed from the input at each time step xt by ht=LReLU(Wxhxt+bxh) where Wxh∈RD×2,bxh∈RD and LReLU(x)=max(x,.01x) is the “leaky rectifier” nonlinearity, as proposed by Maas et al. (2013). We found that this nonlinearity improved early convergence so we used it in all of our models. We tested models where the context vector c was then computed either as in Equation (1), with a(ht)=tanh(Whcht+bhc) where Whc∈R1×D,bhc∈R, or simply as the unweighted mean of h as in Equation (2). We then computed an intermediate vector s=LReLU(Wcsc+bcs) where Wcs∈RD×D,b∈RD from which the output was computed as y=LReLU(Wsys+bsy) where Wsy∈R1×D, bsy∈R. For all experiments, we set D=100.

We used the squared error of the output y against the target value for each sequence as an objective. Parameters were optimized using “adam”, a recently proposed stochastic optimization technique (Kingma & Ba, 2014)

, with the optimization hyperparameters

(.9 and .999 respectively). All weight matrices were initialized with entries drawn from a Gaussian distribution with a mean of zero and, for a matrix

, a standard deviation of

. All bias vectors were initialized with zeros. We trained on mini-batches of 100 sequences and computed the accuracy on a held-out test set of 1000 sequences every epoch, defined as 1000 parameter updates. We stopped training when either 100% accuracy was attained on the test set, or after 100 epochs. All networks were implemented using Lasagne

, which is built on top of Theano

Traditionally, the sequence lengths tested in each task vary uniformly between [T0,1.1T0] for different values of T0. As T0 increases, the model must be able to handle longer-term dependencies. The largest value of T0 attained using RNNs with different training, regularization, and model structures has varied from a few hundred (Martens & Sutskever, 2011; Sutskever et al., 2013; Le et al., 2015; Krueger & Memisevic, 2015; Arjovsky et al., 2015) to a few thousand (Hochreiter & Schmidhuber, 1997; Jaeger, 2012). We therefore tested our proposed feed-forward attention models for T0∈{50,100,500,1000,5000,10000}. The required number of epochs or accuracy after 100 epochs for each task, sequence length, and temporal integration method (adaptively weighted attention or unweighted mean) is shown in Table 1. For fair comparison, we report the best result achieved using any learning rate in {.0003,.001,.003,.01}. From these results, it’s clear that the feed-forward attention model can quickly solve these long-term memory problems for all sequence lengths we tested. Our model is also efficient: Processing one epoch of 100,000 sequences with T0=10000 took 254 seconds using an NVIDIA GTX 980 Ti GPU, while processing the same data with a single-layer vanilla RNN with a hidden dimensionality of 100 (resulting in a comparable number of parameters) took 917 seconds on the same hardware. In addition, there is a clear benefit to using the attention mechanism of Equation (1) instead of a simple unweighted average over time, which only incurs a marginal increase in the number of parameters (10,602 vs. 10,501, or less than 1%).

Because the range of sequence lengths [T0,1.1T0] is small compared to the range of T0 values we evaluated, we further tested whether it was possible to train a single model which could cope with sequences with highly varying lengths. To our knowledge, such a variant of these tasks has not been studied before. We trained models of the same architecture used in the previous experiment on minibatches of sequences whose lengths were chosen uniformly at random between 50 and 10000 time steps. Using the attention mechanism of Equation (1), on held-out test sets of 1000 sequences, our model achieved 99.9% accuracy on the addition task and 99.4% on the multiplication task after training for 100 epochs. This suggests that a single feed-forward network with attention can simultaneously handle both short and very long sequences, with a marginal decrease in accuracy. Using an unweighted average over time, we were only able to achieve accuracies of 77.4% and 55.5% on the variable-length addition and multiplication tasks, respectively.

A clear limitation of our proposed model is that it will fail on any task where temporal order matters because computing an average over time discards order information. For example, on the two-symbol temporal order task (Hochreiter & Schmidhuber, 1997)

X and Y appear in the order X,X; Y,Y; X,Y; or Y,X, our model can differentiate between the X,X and Y,Y cases perfectly but cannot differentiate between the X,Y and Y,X cases at all. Nevertheless, we submit that for some real-world tasks involving sequential data, temporal order is substantially less important than being able to handle very long sequences. For example, in Joachims’ seminal paper on text document categorization (Joachims, 1998), he posits that “word stems work well as representation units and that their ordering in a document is of minor importance for many tasks”. In fact, the current state-of-the-art system for document classification still uses order-agnostic sequence integration (Lei et al., 2015). We have also shown in parallel work that our proposed feed-forward attention model can be used effectively for pruning large-scale (sub)sequence retrieval searches, even when the sequences are very long and high-dimensional (Raffel & Ellis, 2016).

Our experiments explicitly demonstrate that including an attention mechanism can allow a model to refer to specific points in a sequence when computing its output. They also provide an alternate argument for the claim made by Bahdanau et al. (2014) that attention helps models handle very long and widely variable-length sequences. We are optimistic that our proposed feed-forward model will prove beneficial in additional real-world problems requiring order-agnostic temporal integration of long sequences. Further investigation is warranted; to facilitate future work, all of the code used in our experiments is available online.111https://github.com/craffel/ff-attention/tree/master/toy_problems