Indoor route graph learning is critically important for autonomous indoor navigation. A key problem for crowd-sourcing indoor route graph learning is featured trajectory generation. In this paper, a system is provided to generate featured trajectories by crowd-sourcing smartphone data. Firstly, we propose a more accurate PDR algorithm for the generation of trajectory motion data. This algorithm uses ADAPTIV as the step counting method and uses the step estimation algorithm o make the trajectory more accurate in length. Next, the barometer is used to segment the tracks of different floors, and the track floors are obtained by WiFi feature clustering. Finally, by finding the turning point as the feature point of the trajectory, the vertices and edges of the trajectory are extracted to reduce the noise of the long straight trajectory. 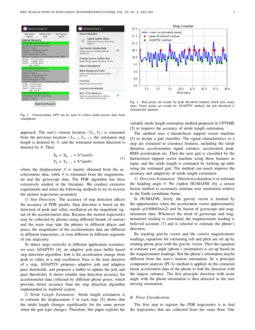 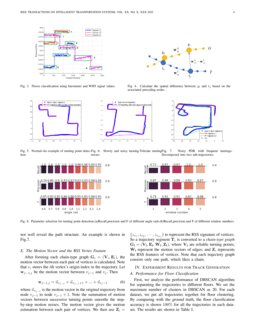 It is ubiquitously accepted that during the autonomous navigation of the...
Luqi Wang, et al. ∙

Global Positioning System (GPS) provides satisfied outdoor positioning services but does not work indoor. WiFi is currently the dominant local wireless network standard for short-range communication and is the leading technology for indoor positioning[li2017passively]. WiFi fingerprinting based on Received Signal Strength Indicator (RSSI) has been widely used in commercial indoor positioning systems because of its high positioning accuracy and ubiquitousness, such as Google and Apple. A traditional fingerprinting system requires a radio map comprised of a large quantity of WiFi fingerprints and each WiFi fingerprint contains a WiFi RSSI list and its ground truth location label. To build up radio maps, professionals consume huge amount of time to conduct a site survey for the ground truth location labels[li2015time]. To avoid the intensive training efforts in fingerprinting, crowdsourcing approaches have become increasingly interesting for researchers. And then, we use crowdsourcing smartphone data to build indoor map.

In this work, we propose a novel system for automatic construction of featured crowdsourcing trajectory generation, which requires neither priori knowledge of a floor plan nor manual initializations of PDR traces. Our contributions are summarized as follows.

Then, a floor classification algorithm based on jointly DBSCAN clustering of barometer readings of PDR trajectories and WiFi MAC address clustering is proposed. It can divide the trajectories into correct floors rather reliably.

Finally, eliable turning point detection method is proposed to detect reliable turnings as the motion feature points. Small turnings are filtered out and frequent turning segments are deleted to exclude the impacts of irregular motions. So each PDR trajectory is converted to a chain type graph

, which uses the end points and the extracted turning points as vertices and uses the motion vectors between vertices as edge.

Trackpuzzle design is based on a participatory sensing approach, where phone sensors measurements collected from users moving naturally inside the building are processed to generate featured motion traces which in turn can provide an adequate description of the indoor route graph. In this paper, we only provide the method of featured trajectory generation, and the part of indoor route graph generation is discussed in another paper. The system consists of two main module: (a) the Data Collection Module is responsible for collecting measurements from users’ devices, and (b) the Featured Trajectory Generation Module is responsible for building accurate motion traces based on Motion Trajectory Generation, Floor Classification and Vertex & Edge Extraction.

The data collection module collects measurements from phone embedded sensors including: accelerometer, magnetometer, gyroscope, barometer and the received cellular and WiFi signal strengths from the available cell towers and WiFi access points. In this system, we use Getsensordata app[jimenez2019tools] to collect these data as shown in Figure 1, and then generate files and send them back to the server for processing.

where the displacement S is mainly obtained from the accelerometer data, while θ is estimated from the magnetometer and the gyroscope data. The PDR algorithm has been extensively studied in the literature. We conduct extensive experiments and select the following methods to try to recover the motion trajectories accurately.

To detect steps correctly in different application scenarios, we uses ADAPTIV[murray2018adaptiv], an adaptive jerk pace buffer based step detection algorithm. Jerk is the acceleration change from peak to valley in a step oscillation. Pace is the time duration of a step. ADAPTIV proposes adaptive jerk and adaptive pace thresholds, and proposes a buffer to update the jerk and pace thresholds. It shows reliable step detection accuracy for accelerometer data collected by different phone poses, which provides better accuracy than the step detection algorithm implemented in Android system.

to design a gait classifier. The signal characteristics in a step are extracted to construct features, including the stride duration, accelerometer signal variance, acceleration peak, RMS acceleration etc. Then the user gait is classified by the hierarchical support vector machine using these features as input, and the stride length is estimated by looking up table using the estimated gait. The method can much improve the accuracy and adaptivity of stride length estimation.

By tracking gravity vector and the correct magnetometer readings, equations for estimating roll and pitch are set up by relating phone pose with the gravity vector. Then the equation to estimate yaw angle (phone’s orientation) is set up based on the magnetometer readings. But the phone’s orientation maybe different from the user’s motion orientation. So a principal component analysis (PCA) method is applied on the extracted linear acceleration data of the phone to find the direction with the largest variance. The first principle direction with acute angle with the phone orientation is then detected as the user moving orientation.

Firstly, the PDR points in a trajectory is clustered by DBSCAN method regarding the barometer readings of the points, which automatically cluster the trajectory data into multiple clusters if the trajectory travels multiple floors. Each cluster is a trajectory segment in one floor.

where mac is the MAC address of an AP. We then obtain the intersection and union of fi and fj .

The Jaccard coefficient of fi and fj is calculated using the following equation:

where |X| is the carnality of the set X. Finally, using jaccard coefficient Jacij

as a distance, a hierarchical clustering

Iii-C Vertex and Edge Extraction On Each Trajectory

Then we consider feature extraction on each trajectory segment. Traditional RSS features are noisy. But different PDR trajectories on a same floor show rather stable relative turning patterns at common turning points. We therefore propose to extract the reliable

We therefore design a sliding window based turning point detection algorithm. The algorithm starts by using the first point as the origin. V is the detected set of turning points which is initialized by V=1. Starting from (x1,y1)T, whenever a turning point (denoted as point i) is detected, this turning point will become the starting point of a new window, and is set as the origin of the new window. For each point following this point, i.e., i+1,⋯,i+t, turning angle {αi+1,⋯,αi+t} are calculated by

When αi+t≤ε, i+t is added to the current window. Only when αi+t>ε, i+t−1 will be detected as a new turning point. i+t−1 is added into the turning point set. The window length is reset to 1 and the point i+t−1 becomes the new origin. By this method, the sliding window filters out the turning noises and detects a turning point when enough turning has been accumulated. For a trajectory segment Ti, all detected turning points will be extracted as vertices, denoted by set Vi. The motion vector between each pair of vertices is a motion edge. The edges form a edge set Ei. So the trajectory Ti is represented by a chain-type graph Gi=(Vi,Ei).

Iii-E The Motion Vector and the RSS Vertex Feature

First, we analyze the performance of DBSCAN algorithm for separating the trajectories to different floors. We set the maximum number of clusters in DBSCAN as 20. For each dataset, we put all trajectories together for floor clustering. By comparing with the ground truth, the floor classification accuracy is shown 100% for all the trajectories in each data-set. The results are shown in Table I.

Using the dataset of Dangdai Shopping Mall, we evaluated the precision, recall and F of turning point detection when ε varies is the range [0.6,1.4]. The results are shown in Fig(8(a)). It can be seen that ε=1 obtains the highest F−measure. Then, by fixing ε=1, we calculated the precision, recall and F of as a function of the window length t when t varies in [1,5]. The result is shown in Fig(8(b)). It can be seen that when t=4, the precision reaches 100%. So turning point detection parameters are set as t=4,ε=1 in the final experiments.