This paper deals with a method for generating realistic labeled masses. Recently, there have been many attempts to apply deep learning to various bio-image computing fields including computer-aided detection and diagnosis. In order to learn deep network model to be well-behaved in bio-image computing fields, a lot of labeled data is required. However, in many bioimaging fields, the large-size of labeled dataset is scarcely available. Although a few researches have been dedicated to solving this problem through generative model, there are some problems as follows: 1) The generated bio-image does not seem realistic; 2) the variation of generated bio-image is limited; and 3) additional label annotation task is needed. In this study, we propose a realistic labeled bio-image generation method through visual feature processing in latent space. Experimental results have shown that mass images generated by the proposed method were realistic and had wide expression range of targeted mass characteristics. 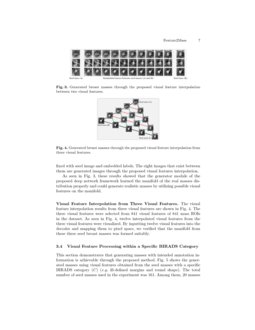 Although there have been a few researches dedicated to solving this problem through generative model, there were some limitations as follows: 1) The generated bio-image does not seem realistic [3, 9]; 2) the variation of generated bio-image is limited [1, 4, 7, 10]; and 3) additional label annotation task is needed which requires expensive cost [6, 7].

The main contribution of this paper is summarized as follows: 1) We have proposed a novel method for generating realistic labeled masses that is not confined to the expression range of the limited real-world data.

2) Through the proposed method, we have succeeded in forming an appropriate manifold for the characteristics of masses in latent space which is difficult due to the non-rigid nature of the masses.

3) Comprehensive experiments have been conducted to validate the effectiveness of the proposed method. Experimental results show that masses generated by the proposed method are remarkably realistic. Moreover, the generated masses have a wide expression range of targeted mass characteristics.

2.1 Overview of the Proposed Mass Generation

). The two discriminators scheme is adopted to effectively extract and backpropagate the BIRADS description characteristics of each generated mass.

The goal of learning phase is to let the G learns the manifold of the breast masses which will be used in generating phase. Overall explanation of the learning/generating phase procedure of the proposed architecture is as follows.

In the learning phase, as seen in Fig. 1, breast mass image and two of the major information in BIRADS, margin (¯m) and shape (¯s) labels are inputted to the network. The margin and shape labels are embedded into E1(¯m) and E2(¯s) through BIRADS description embedding modules before inputted to G. Then G generates the fake mass (I′) using the inputted mass (I) and embedded labels as

where E1(¯m) and E2(¯s) denotes the embedded margin (¯m) and shape (¯s) labels of BIRADS description.

In the generating phase, as seen in Fig. 2, we use the G and BIRADS description embedding modules which are trained to approximate breast mass manifold. G includes encoder and decoder which consist of convolution layer and transposed convolution layer, respectively. In front of G, a seed breast mass and corresponding margin or shape labels are embedded through BIRADS embedding modules similar to learning phase. When the breast mass with embedded labels come into the input of G, the encoder maps it on the latent space formed by the seed mass and corresponding BIRADS description. By performing the feature processing on the latent space, realistic breast masses could be generated by decoding processed visual features into pixel space.

)-dimension hyperplane. In other words, when

In this study, the proposed deep network framework utilizes two BIRADS description labels (i.e. margin and shape), and it has two discriminators (D1 and D2

) to predict them. The loss function of

D1 is defined as

denotes the prediction about real/fake and estimated margin label of

D1, respectively. λ1 is the weight multiplied by each loss term to balance overall loss function. The first two terms of loss function represent the general GAN loss of adversarial learning that predicts the real/fake of the real breast mass image (I) and generated breast mass image (I′). The loss terms in λ1(⋅) decrease when D1 predicts the ground truth margin label (¯m) more precisely from the inputted I and I′.

The loss function of D2 is defined as

where Ds2(⋅) denotes the prediction about shape label of D2. The first two terms of loss function represent the general GAN loss of adversarial learning that predicts the real/fake of the I and I′ by G. The loss terms in λ2(⋅) decrease when D2 predict the ground truth shape label (¯s) from the inputted I and I′.

The loss term that predicts the BIRADS description label by taking I′ as an input serves as noise in the early learning phase when G does not generate a realistic breast mass. However, after G has been able to generate a breast masses that is similar to real breast masses, it pushes D to predict the BIRADS description label better for the generated masses which has non-linearly different aspect (but does not differ much enough to have different margins and shape labels). Therefore, it makes D1 and D2 have a data augmentation effect.

Next, the loss function of G is defined as

where λ3 and λ4 are the weights multiplied by each loss term to balance overall loss function. The loss term L1(I,I′) denotes reconstruction loss using L1-norm between real breast mass I and generated breast mass I′. The first two loss terms in loss function, like the loss functions of D1 and D2, mean the general GAN losses of adversarial learning for real/fake predictions of D1 and D2 for the I′. The loss terms in λ3(⋅) decrease when G could generate I′ that has more strong characteristics along BIRADS description ¯m, ¯s. Like the loss term in D, after D has been able to properly identify the BIRADS description label, it pushes G represents the characteristic of the BIRADS description label better which is used in I′ generation. The last L1 loss term pushes G to form a manifold similar to the real data distribution.

For identifying the effectiveness of the proposed method, we utilized the publicly available DDSM dataset. The mammograms scanned by Howtek 960 were selected from DDSM dataset for the experiments. A total of 841 regions of interest (ROI) were used. The size of seed image I was resized to 64 by 64. For the BIRADS description, as aforementioned, shape and margin of masses were selected from BIRADS descriptions. Since these are representative characteristics of breast masses and widely used for recording in clinical reports.

For training the generator and discriminator, the Adam optimization was used with learning rate 0.0002 and pytorch default Adam optimizer settings. The values of loss function balancing weights

were 10, 10, 10, and 300, respectively. We utilized a batch size of 512 and trained the network for 8000 epochs. For image data augmentation, horizontal flipping, vertical flipping, and cropping were performed in a random manner.

As seen in Fig. 3, these results showed that the generator module of the proposed deep network framework learned the manifold of the real masses distribution properly and could generate realistic masses by utilizing possible visual features on the manifold.

In Fig. 5, the top three masses which have the largest weights αCsel and corresponding weights are represented in the right side of each generated mass. As seen in Fig. 5, the generated masses were realistic and had target characteristics (e.g. ill-defined margins and round shape). Therefore, the masses which are generated utilizing visual features in a specific BIRADS description category did not require additional labeling cost.

In this paper, we proposed the novel bio-image generation method through visual feature processing. The proposed method learned the generative model with adversarial learning to effectively form manifold in latent feature space using a limited number of annotated mass images. After learning the generative model, the encoder of the generative model could map mass images onto the manifold of the latent feature space (we defined it as visual feature). By decoding the processed visual features, the mass image was generated. Through extensive experiments, we verified that the masses generated by the proposed method were realistic and had a wide expression range. Moreover, it was possible to generate masses with the target characteristics. By generating the masses with the target characteristics, it could alleviate the labeling workload for utilizing generated masses in real-world. It is expected that the proposed method could be generalized to other bioimaging fields where suffering from lack of annotated data.