We study feature propagation on graph, an inference process involved in graph representation learning tasks. It's to spread the features over the whole graph to the t-th orders, thus to expand the end's features. The process has been successfully adopted in graph embedding or graph neural networks, however few works studied the convergence of feature propagation. Without convergence guarantees, it may lead to unexpected numerical overflows and task failures. In this paper, we first define the concept of feature propagation on graph formally, and then study its convergence conditions to equilibrium states. We further link feature propagation to several established approaches such as node2vec and structure2vec. In the end of this paper, we extend existing approaches from represent nodes to edges (edge2vec) and demonstrate its applications on fraud transaction detection in real world scenario. Experiments show that it is quite competitive. 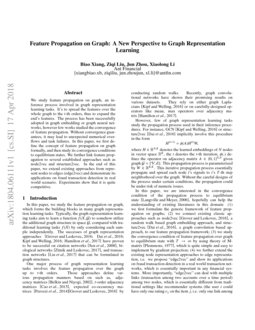 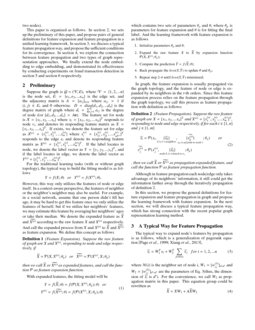 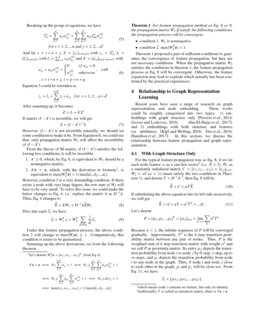 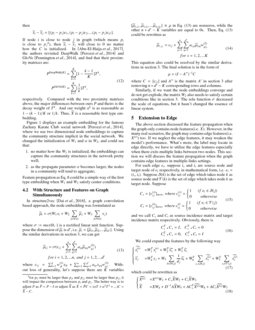 Co-embedding of Nodes and Edges with Graph Neural Networks

Quantifying Challenges in the Application of Graph Representation Learning

Tracing the Propagation Path: A Flow Perspective of Representation Learning on Graphs

However, few of graph representation learning tasks study the propagation process used in their inference procedures. For instance, GCN [Kipf and Welling2016] or structure2vec [Dai et al.2016] implicitly involve this procedure in the form

where H∈RN,K denotes the learned embeddings of N

RK, the t denotes the t-th iteration, ϕ(.) defines the operator on adjacency matrix A∈{0,1}N,N given graph G={V,E}. This propagation process is parameterized by W∈RK,K. This iterative propagation process essentially propagate and spread each node i’s signals to i’s T-th step neighborhood over the graph. Without the careful designs of the process under certain conditions, the propagation could be under risk of numeric issues.

In this paper, we are interested in the convergence condition of the propagation process to equilibrium state [Langville and Meyer2006], hopefully can help the understanding of existing literatures in this domain: (1) we first formulate the generic framework of feature propagation on graphs; (2) we connect existing classic approaches such as node2vec [Grover and Leskovec2016], a random walk based graph embedding approach, and structure2vec [Dai et al.2016], a graph convolution based approach, to our feature propagation framework; (3) we study the convergence condition of feature propagation over graph to equilibrium state with T→∞ by using theory of M-matrix [Plemmons1977], which is quite simple and easy to implement by gradient projection; (4) we further extend the existing node representation approaches to edge representation, i.e. we propose “edge2vec” and show its applications on fraud transaction detection in a real world transaction networks, which is essentially important in any financial systems. More importantly, “edge2vec” can deal with multiple links (transaction among two accounts over a time period) among two nodes, which is essentially different from traditional settings like recommender systems (the user i could have only one rating rij on the item j, i.e. only one link among two nodes).

For the traditional learning tasks (with or without graph topology), the typical way to build the fitting model is as follows

˜X and ˜X(e) according to the raw feature X and X(e) respectively. And call the expanded process from X and X(e) to ˜X and ˜X(e) as feature expansion. We define this concept as follows

(Feature Expansion). Suppose the raw feature of graph are X and X(e), responding to node and edge respectively, if

then we call ˜X or ˜X(e) as expanded features, and call the function P as feature expansion function.

With expanded features, the fitting model will be

, then we call ˜X or ˜X(e) as propagation-expanded feature, and call the function P as feature propagation function.

Although in feature propagation each node/edge only takes advantage of its neighbors’ information, it still could get the information farther away through the iteratively propagation of definition 2.

3 A Typical Way for Feature Propagation

The typical way to expand node’s features by propagation is as follows, which is a generalization of pagerank equation [Page et al.1999, Xiang et al.2013],

where N(i) is the neighbor set of node i, W1=[w(1)ij]d∗d′ and W2=[w(2)ij]d′∗d′ are the parameters of Eq. 3(thus, the dimension of ˜xi is d′). For the convenience, we call W2 as propagation matrix in this paper. This equation group could be rewritten as

Breaking up the group of equations, we have

Equation 5 could be rewritten as

After summing up, it becomes

If matrix (I−A′) is invertible, we will get

However, (I−A′) is not invertible naturally, we should set some conditions to make it be. From Equation 6, we could see that, only propagation matrix W2 will affect the invertibility of (I−A′).

From the theory of M-matrix, if (I−A′) satisfies the following two conditions, it will be invertible.

However, condition 2 is a very demanding condition. If there exists a node with very large degree, the row sum of W2 will have to be very small. To solve this issue, we could make the below changes to Eq. 4, i.e. replace the matrix A as D−1A. Then, Eq. 4 changes to

Dive into each ˜xi, we have

Under this feature propagation process, the above condition 2 will change to max{W2e}≤1. Comparatively, this condition is easier to be guaranteed.

Summing up the above derivations, we form the following theorem.

Recent years have seen a surge of research on graph representation and node embedding. These works could be roughly categorized into two types: 1) embeddings with graph structure only [Perozzi et al.2014, Grover and Leskovec2016, Abu-El-Haija et al.2017], and 2) embeddings with both structure and features (or attributes) [Kipf and Welling2016, Dai et al.2016, Hamilton et al.2017]. In this section, we discuss the relationship between feature propagation and graph representation.

4.1 With Graph Structure Only

For the typical feature propagation way as Eq. 8, if we let each node feature xi as a one-hot vector222which means node i contains no feature, but only its identity. (i.e. X=I), W1 as a randomly initialized matrix C=[c1,c2,...cd′]=[cij]n∗d′, W2=αI (α<1) (must satisfy the two conditions in Theorem 1), and denote T=D−1A 333traditionally, T is called as transition matrix, there is Te=e, then Eq. 8 will be

If substituting the above equation into its left side recursively, we will get

Because α<1, the infinite sequence of P will be converged gradually. Approximately, Tk is the k

-step transition probability matrix between any pair of nodes. Thus,

If node i is close to node j in graph (which means pi is close to pj444for pii must be larger than pji and pjj must be larger than pij, it will impact the comparison between pi and pj. The better way is to adjust P as ^P=P−I or adjust ˜X as ^X=^PC=(αT+α2T2+...)C=˜X−C.), then ˜xi−˜xj will close to 0 no matter how the C is initialized. In [Abu-El-Haija et al.2017], the authors revisited DeepWalk [Perozzi et al.2014] and GloVe [Pennington et al.2014], and find that their proximity matrices are:

respectively. Compared with the two proximity matrices above, the major differences between ours P and theirs is the decay weight of Tk. And our weight αk is as reasonable as 1−(k−1)/K or 1/k. Thus, ˜X is a reasonable first type embedding.

Figure 1 displays an example embedding for the famous Zachary Karate Club social network [Perozzi et al.2014], where we use two dimensional node embeddings to capture the community structure implicit in the social network. We changed the initialization of W1 and α in W2, and could see that:

Feature propagation as Eq. 8 could be a simple way of the first type embedding when W1 and W2 satisfy center conditions.

4.2 With Structure and Features on Graph Simultaneously

In structure2vec [Dai et al.2016], a graph convolution based approach, the node embedding was formulated as

is a rectified linear unit function. Suppose the dimension of

This equation also could be resolved by the similar derivations in section 3. The final solution is in the form of

where C=[cij] and A′′ is the matrix A′ in section 3 after removing n∗d′−K corresponding rows and columns.

Similarly, if we want the node embeddings converge and do not get explode, the matrix W2 also needs to satisfy certain conditions like in section 3

σ decreased the scale of equations, but it hasn’t changed the essence of linear system.

We could expand the features by the following way

which could be rewritten as

We call this feature propagation way for edge as edge2vec in this paper. For edge2vec, we only need to guarantee the following conditions

to guarantee its convergence.

In this section, we study a real world data at a leading casheless payment platform in the world, served more than hundred millions of users. As a financial services provider, one of major problems faced is the risk control of fraudulent transactions. Detecting and identifying the risk of fraud for each transaction plays the fundamental importance of the platform.

In particular, we study the fraud transaction in the online shopping setting, where sellers sell fake items to customers to reap undeserved profits. Independently considering each transaction between a seller and a buyer cannot characterize useful information from the whole transaction network. Considering the problem in the feature propagation framework over graph can help us understand underlying aggregation pattern of the fraudulent transactions.

The experimental fraud transaction data555the data is randomly sampled over a time period with complete data desensitization (no personal profile, no user id). contains three types of features: 1) buyer’s features 2) seller’s feautres and 3) characterizations on each transaction. We treat each buyer and seller as a node of the graph, and each transaction is an edge between buyer and seller. If one transaction ei is fraud, we label its corresponding edge as y(e)i=[1,0], otherwise label the transaction ei as y(e)i=[0,1]. Our task is to predict whether or not one edge is a fraud. The detailed statistics of the data is described in Table 2.

Note that there could be multiple edges between a seller and a buyer, thus make the setting a bit different from traditional recommendation setting. Our edge2vec can embed each edge into a vector space, so that it can help us to infer the risk of each edge in the graph.

As discussed in section 2, the learning framework is

, and finally feed to the cross-entropy loss function:

Control1. The first type is no feature propagation, i.e. we do not expand the edge feature at all. That is,

Control2. The second type is to only expand the edge feature by concatenating its source and target node features, that is,

Treatment (edge2vec). The third type is to expand the edge feature by the propagation process defined in section 5, that is,

We plot the PR-curves 666https://en.wikipedia.org/wiki/Precision_and_recall of comparison approaches in Figure 2. We could see that the result of the treatment method edge2vec with an appropriate λ performs much better than Control1 and a little better than Control2. Although the gain between treatment and Control2 is not such significant, it is in line with our expectations that feature propagation could improve the performance of prediction model.

We also analyze the potential numerical issues by testing the structure2vec method [Dai et al.2016]. For the structure2vec method, its loss function introduced a penalty parameter λ to constrain the value of W1 and W2. If λ is set up as a small value, the numerical issue will rise up. We take four numbers of λ {10−3,10−4,10−5,10−6} and then test in which order of steps {1−order,2−orders,3−orders,4−orders,5−orders} (see into section 4.1) will lead to numerical overflow.

The following table displays the test results. We can find out that when λ becomes small enough(10−5 or 10−6), the numerical overflow issue happens. However, setting a large λ is not a good method to handle this issue, for a large λ may weaken the model’s performance very sharply (see the curve of edge2vec under λ=0.01 in Figure 2.