Emotion recognition plays an important role in human-computer interaction (HCI) and has been extensively studied for decades. Although tremendous improvements have been achieved for posed expressions, recognizing human emotions in "close-to-real-world" environments remains a challenge. In this paper, we proposed two strategies to fuse information extracted from different modalities, i.e., audio and visual. Specifically, we utilized LBP-TOP, an ensemble of CNNs, and a bi-directional LSTM (BLSTM) to extract features from the visual channel, and the OpenSmile toolkit to extract features from the audio channel. Two kinds of fusion methods, i,e., feature-level fusion and model-level fusion, were developed to utilize the information extracted from the two channels. Experimental results on the EmotiW2018 AFEW dataset have shown that the proposed fusion methods outperform the baseline methods significantly and achieve better or at least comparable performance compared with the state-of-the-art methods, where the model-level fusion performs better when one of the channels totally fails. 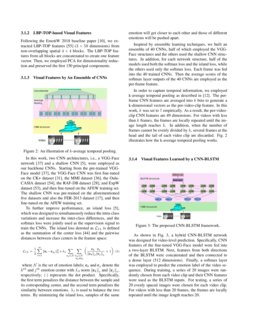 In this contribution, we investigate the effectiveness of deep fusion of...
Andreas Triantafyllopoulos, et al. ∙

Extensive efforts have been devoted to emotion recognition because of a wide range of applications in HCI. Recognizing human emotions from facial displays is still a challenging problem due to head pose variations, illumination changes, and identity-related attributes, which, however, do not affect the information extracted from the audio channel. Human affective behavior is multimodal naturally. Researchers have been investing significant efforts in exploring how to build the best model to effectively exploit information from multiple modalities [33].

We are motivated by the fact that voice and facial expression are highly correlated when conveying emotions. For example, without looking at a face, we would know that a person is happy when hearing laughter. In this paper, we developed a feature-level fusion method and a model-level fusion technique by exploiting the information from both audio and visual channels. For the feature-level fusion, the audio features and three different types of visual features are concatenated to construct a joint feature vector. The model-level fusion explicitly handles differences in time scale, time shift, and metrics from different signals. The audio information and visual information are extracted and employed for emotion recognition independently; and then these unimodal recognition results are combined via a probabilistic framework, i.e., a Bayesian network in this work. Fig.

Experimental results on the EmotiW 2018 AFEW database have shown that both of the proposed fusion methods significantly outperform the baseline unimodal recognition methods and also achieve better or comparable performance compared with the state-of-the-art methods.

Facial activity plays a significant role in emotion recognition. One of the major steps is to extract the most discriminative features that are capable of capturing appearance and geometry facial changes. These features can be roughly divided into two categories: human designed and learned features. Most recently, CNNs [18, 34, 3, 5, 4, 47, 46, 30] have achieved promising recognition performance under real-world conditions as demonstrated in the recent EmotiW2017 [27, 22, 43] and EmotiW2018 [25] challenges.

and trains a classifier on top of it for emotion recognition. Recently, deep learning has been utilized for learning features from both audio and visual input

[50] utilized the AU-aware features and their latent relations and then fed the concatenated features into a group of SVMs to make prediction.

Decision-level fusion combines recognition results from two modalities assuming that audio and visual signals are conditionally independent of each other [51, 50, 12, 14, 48], while there are strong semantic and dynamic relationships between audio and visual channels. For example, Yao et al. [50, 49] performed the decision-level fusion by averaging prediction scores of individual classification scores. In [23, 12, 14, 48, 22], fusion by weighted scores of individual models were used instead of taking average over all different models.

Model-level fusion exploits correlation between audio and visual channels [51] and is usually performed in a probabilistic manner. For example, coupled, tripled, or multistream fused HMMs [52] were developed by integrating multiple component HMMs, each of which corresponds to one modality, e.g., audio or visual, respectively. Fragpanagos et al. [15] and Caridakis et al. [6] used an ANN to perform fusion of different modalities. Sebe et al. [40] employed a Bayesian network to recognize expressions from audio and facial activities. Chen et al. [7] employed Multiple Kernel Learning (MKL) to find an optimal combination of the features from two modalities.

In our work, information is extracted from both audio and visual channels. Specifically, for the audio channel, we utilized a set of low-level spectral or voicing related feature descriptors and voice/unvoice durational features; for the visual channel, we employed both human-crafted features, i.e., LBP-TOP [55], and features learned by a CNN and a bi-directional LSTM. Finally, we combined audio and visual information for emotion recognition given a video clip.

In this work, audio signal was extracted from video at a sampling rate of 48 kHz and 160k bps. Then, a feature set of 1582 audio features, which was used in the INTERSPEECH 2010 Paralinguistic challenge [39], was extracted by OpenSMILE [13]. The feature set is comprised of 34 spectral related low-level audio feature descriptors (LLDs) with their delta coefficients ×21 functionals, 4 voicing related LLDs with their delta coefficients ×19 functionals, and 2 voiced/unvoiced durational features. In addition, PCA was utilized to compress the features. Specifically, the first 20 principal components were preserved.

Following the EmotiW 2018 baseline paper [10], we extracted LBP-TOP features [55] (3×59 dimensions) from non-overlapping spatial 4×4 blocks. The LBP-TOP features from all blocks are concatenated to create one feature vector. Then, we employed PCA for dimensionality reduction and preserved the first 150 principal components.

3.1.3 Visual Features by An Ensemble of CNNs

To further improve performance, an island loss [5], which was designed to simultaneously reduce the intra-class variations and increase the inter-class differences, and the softmax loss were jointly used as the supervision signal to train the CNNs. The island loss denoted as LIL is defined as the summation of the center loss [44] and the pairwise distances between class centers in the feature space:

where N is the set of emotion labels; ck and cj denote the kth and jth emotion center with L2 norm ∥ck∥2 and ∥cj∥2, respectively; (⋅) represents the dot product. Specifically, the first term penalizes the distance between the sample and its corresponding center, and the second term penalizes the similarity between emotions. λ1 is used to balance the two terms. By minimizing the island loss, samples of the same emotion will get closer to each other and those of different emotions will be pushed apart.

Inspired by ensemble learning techniques, we built an ensemble of 40 CNNs, half of which employed the VGG-Face structures and the others used the shallow CNN structures. In addition, for each network structure, half of the models used both the softmax loss and the island loss, while the others used only the softmax loss. Each frame was fed into the 40 trained CNNs. Then the average scores of the softmax layer outputs of the 40 CNNs are employed as the per-frame feature.

In order to capture temporal information, we employed k-average temporal pooling as described in [12]. The per-frame CNN features are averaged into k bins to generate a k-dimensional vectors as the per-video-clip feature. In this work, k was set to 7 empirically. As a result, the per-video-clip CNN features are 49 dimensions. For videos with less than k frames, the frames are locally repeated until the image length reaches k. In addition, when the number of frames cannot be evenly divided by k, several frames at the head and the tail of each video clip are discarded. Fig. 2 illustrates how the k-average temporal pooling works.

3.1.4 Visual Features Learned by a CNN-BLSTM

As shown in Fig. 3, a hybrid CNN-BLSTM network was designed for video-level prediction. Specifically, CNN features of the fine-tuned VGG-Face model were fed into a two-layer BLSTM. Next, features from both directions of the BLSTM were concatenated and then connected to a dense layer (512 dimensions). Finally, a softmax layer was employed to predict the emotion label of the video sequence. During training, a series of 20 images were randomly chosen from each video clip and their CNN features were used as the BLSTM inputs. For testing, a series of 20 evenly spaced images were chosen for each video clip. For videos with less than 20 frames, the frames are locally repeated until the image length reaches 20.

In this work, we employed a Bayesian Network (BN) for model-level fusion as illustrated in Fig. 5

. A BN is a directed acyclic graph, where the shaded nodes are measurement nodes whose states are available during inference and the unshaded node is the hidden node whose state can be estimated by probabilistic inference over the BN.

The proposed fusion methods were evaluated on the Acted Facial Expressions in the Wild (AFEW) [9] dataset. The AFEW dataset is a dynamic facial expression dataset consisting of short video clips, which are collected from scenes in movies/TV shows with natural head pose movements, occlusions and various illuminations. Each of the video clips has been labeled as one of seven expressions: anger, disgust, fear, happiness, sadness, surprise, and neutral. The subjects are diverse in race, age, and gender. The dataset is divided into three partitions: a training set (773), a validation set (383), and a test set (653) such that the data in those three sets are coming from mutually exclusive movies and actors. The test set labels are held by the challenge organizers and unknown to the public.

Face alignment was employed on each image based on centers of two eyes and nose. The aligned facial images were then resized to 60×60 for the shallow CNN and 256×256 for the VGG-Face CNN. For data augmentation purpose, 48×48 patches and 224×224 patches were randomly cropped from the 60×60 images and 256×256 images, and then rotated by a random degree between -5∘ and 5∘, respectively. The rotated images were horizontally flipped randomly as the input of all CNNs.

The proposed two fusion methods were evaluated and compared with the four baseline methods based on (1) audio, (2) LBP-TOP, (3) an ensemble of CNNs, and (4) CNN-BLSTM, respectively. As shown in Table 1, the deep learning based features (the ensemble CNN features and the CNN-BLSTM features) achieved better recognition performance than the human crafted audio/visual features among the baseline methods. Both the proposed fusion methods improve the baseline unimodal methods employing a single type of features with a large margin.

Although the average recognition performance was improved significantly by using the fusion-based methods compared to all of the baseline methods, the improvement for recognizing disgust, fear, and surprise was marginal as compared to the best baseline methods, i.e., the two deep learning based methods on the validation set. Furthermore, the feature-level fusion method failed to recognize disgust, fear, and surprise on the test set. This is because all of the four types of features could not well characterize these three expressions: the recognition accuracies of the four baseline methods are all below 50% for these expressions. In contrast, by considering the measurement uncertainty in a probabilistic manner, the model-level fusion yielded the best results on recognizing these difficult expressions on the validation set. These observations imply that the feature-level fusion may further boost the recognition performance of those expressions that can be well recognized by a single type of features, while the model-level fusion may be employed to improve the recognition performance of the difficult expressions.

We proposed two novel audiovisual fusion methods by exploiting audio features, LBP-TOP-based features, CNN-based features, and CNN-BLSTM features. Both the proposed fusion methods significantly outperform the baseline methods that employ a single type of feature in terms of the average recognition performance. In the future, more advanced techniques will be developed to improve the audio-based emotion recognition by exploring deep learning based approaches.

This work is supported by National Science Foundation under CAREER Award IIS-1149787. The Titan Xp used for this research was donated by the NVIDIA Corporation.