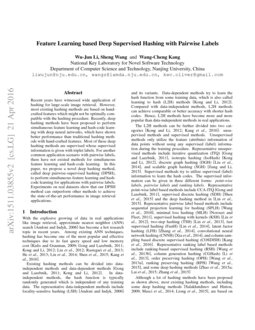 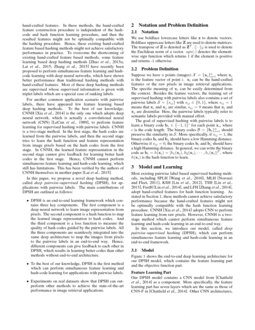 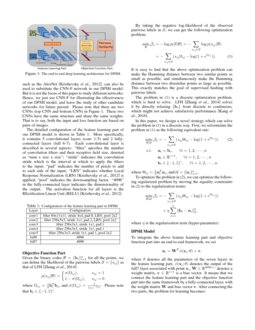 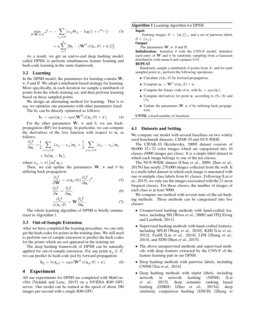 Hashing is one of the most popular and powerful approximate nearest neig...
Xiaofang Wang, et al. ∙

Implementation of our ICCV 2017 paper: MIHash - Hashing with Mutual Information

For another common application scenario with pairwise labels, there have appeared few feature learning based deep hashing methods. To the best of our knowledge, CNNH [Xia et al.2014] is the only one which adopts deep neural network, which is actually a convolutional neural network (CNN) [LeCun et al.1989], to perform feature learning for supervised hashing with pairwise labels. CNNH is a two-stage method. In the first stage, the hash codes are learned from the pairwise labels, and then the second stage tries to learn the hash function and feature representation from image pixels based on the hash codes from the first stage. In CNNH, the learned feature representation in the second stage cannot give feedback for learning better hash codes in the first stage. Hence, CNNH cannot perform simultaneous feature learning and hash-code learning, which still has limitations. This has been verified by the authors of CNNH themselves in another paper [Lai et al.2015].

In this paper, we propose a novel deep hashing method, called deep pairwise-supervised hashing (DPSH), for applications with pairwise labels. The main contributions of DPSH are outlined as follows:

Z are used to denote matrices. The transpose of Z is denoted as ZT. ∥⋅∥2 is used to denote the Euclidean norm of a vector. sgn(⋅) denotes the element-wise sign function which returns 1 if the element is positive and returns -1 otherwise.

Suppose we have n points (images) X={xi}ni=1 where xi is the feature vector of point i. xi can be the hand-crafted features or the raw pixels in image retrieval applications. The specific meaning of xi can be easily determined from the context. Besides the feature vectors, the training set of supervised hashing with pairwise labels also contains a set of pairwise labels S={sij} with sij∈{0,1}, where sij=1 means that xi and xj are similar, sij=0 means that xi and xj are dissimilar. Here, the pairwise labels typically refer to semantic labels provided with manual effort.

In this section, we introduce our model, called deep pairwise-supervised hashing (DPSH), which can perform simultaneous feature learning and hash-code learning in an end-to-end framework.

Figure 1 shows the end-to-end deep learning architecture for our DPSH model, which contains the feature learning part and the objective function part.

Our DPSH model contains a CNN model from [Chatfield et al.2014] as a component. More specifically, the feature learning part has seven layers which are the same as those of CNN-F in [Chatfield et al.2014]. Other CNN architectures, such as the AlexNet [Krizhevsky et al.2012], can also be used to substitute the CNN-F network in our DPSH model. But it is not the focus of this paper to study different networks. Hence, we just use CNN-F for illustrating the effectiveness of our DPSH model, and leave the study of other candidate networks for future pursuit. Please note that there are two CNNs (top CNN and bottom CNN) in Figure 1. These two CNNs have the same structure and share the same weights. That is to say, both the input and loss function are based on pairs of images.

. More specifically, it contains 5 convolutional layers (conv 1-5) and 2 fully-connected layers (full 6-7). Each convolutional layer is described in several aspects: “filter” specifies the number of convolution filters and their receptive field size, denoted as “num x size x size”; “stride” indicates the convolution stride which is the interval at which to apply the filters to the input; “pad” indicates the number of pixels to add to each side of the input; “LRN” indicates whether Local Response Normalization (LRN)

is applied; “pool” indicates the downsampling factor. “4096” in the fully-connected layer indicates the dimensionality of the output. The activation function for all layers is the REctification Linear Unit (RELU)

Given the binary codes B={bi}ni=1 for all the points, we can define the likelihood of the pairwise labels S={sij} as that of LFH [Zhang et al.2014]:

By taking the negative log-likelihood of the observed pairwise labels in S, we can get the following optimization problem:

The problem in (3.1.2) is a discrete optimization problem, which is hard to solve. LFH [Zhang et al.2014] solves it by directly relaxing {bi} from discrete to continuous, which might not achieve satisfactory performance [Kang et al.2016].

To optimize the problem in (2), we can optimize the following regularized problem by moving the equality constraints in (2) to the regularization terms:

where η is the regularization term (hyper-parameter).

To integrate the above feature learning part and objective function part into an end-to-end framework, we set

where θ denotes all the parameters of the seven layers in the feature learning part, ϕ(xi;θ) denotes the output of the full7 layer associated with point xi, W∈R4096×c denotes a weight matrix, v∈Rc×1

is a bias vector. It means that we connect the feature learning part and the objective function part into the same framework by a fully-connected layer, with the weight matrix

W and bias vector v. After connecting the two parts, the problem for learning becomes:

As a result, we get an end-to-end deep hashing model, called DPSH, to perform simultaneous feature learning and hash-code learning in the same framework.

In the DPSH model, the parameters for learning contain W, v, θ and B. We adopt a minibatch-based strategy for learning. More specifically, in each iteration we sample a minibatch of points from the whole training set, and then perform learning based on these sampled points.

We design an alternating method for learning. That is to say, we optimize one parameter with other parameters fixed.

The bi can be directly optimized as follows:

For the other parameters W, v and θ, we use back-propagation (BP) for learning. In particular, we can compute the derivatives of the loss function with respect to ui as follows:

Then, we can update the parameters W, v and θ by utilizing back propagation:

The whole learning algorithm of DPSH is briefly summarized in Algorithm 1.

The deep hashing framework of DPSH can be naturally applied for out-of-sample extension. For any point xq∉X, we can predict its hash code just by forward propagation:

All our experiments for DPSH are completed with MatConvNet [Vedaldi and Lenc2015] on a NVIDIA K80 GPU server. Our model can be trained at the speed of about 290 images per second with a single K80 GPU.

We compare our model with several baselines on two widely used benchmark datasets: CIFAR-10 and NUS-WIDE.

The CIFAR-10 [Krizhevsky2009] dataset consists of 60,000 32×32 color images which are categorized into 10 classes (6000 images per class). It is a single-label dataset in which each image belongs to one of the ten classes.

The NUS-WIDE dataset [Chua et al.2009, Zhao et al.2015b] has nearly 270,000 images collected from the web. It is a multi-label dataset in which each image is annotated with one or mutiple class labels from 81 classes. Following [Lai et al.2015], we only use the images associated with the 21 most frequent classes. For these classes, the number of images of each class is at least 5000.

We compare our method with several state-of-the-art hashing methods. These methods can be categorized into five classes:

For deep hashing methods, we first resize all images to be 224×

224 pixels and then directly use the raw image pixels as input. We adopt the CNN-F network which has been pre-trained on the ImageNet dataset

As most existing hashing methods, the mean average precision (MAP) is used to measure the accuracy of our proposed method and other baselines. The hyper-parameter η in DPSH is chosen by a validation set, which is 10 for CIFAR-10 and 100 for NUS-WIDE unless otherwise stated.

In NUS-WIDE, we randomly sample 2100 query images from 21 most frequent labels (100 images per class) by following the strategy in [Xia et al.2014, Lai et al.2015]. For supervised methods, we randomly select 500 images per class from the rest images as the training set. The pairwise label set S is constructed based on the image class labels. That is to say, two images will be considered to be similar if they share at least one common label. For NUS-WIDE, we calculate the MAP values within the top 5000 returned neighbors.

The MAP results are reported in Table 4, where DPSH, DPSH0, NINH and CNNH are deep methods, and all the other methods are non-deep methods with hand-crafted features. The result of NINH, CNNH, KSH and ITQ are from [Xia et al.2014, Lai et al.2015]

. Please note that the above experimental setting and evaluation metric is exactly the same as that in

[Xia et al.2014, Lai et al.2015]. Hence, the comparison is reasonable. We can find that our method DPSH dramatically outperform other baselines111The accuracy of LFH in Table 4 is much lower than that in [Zhang et al.2014, Kang et al.2016] because less points are adopted for training in this paper. Please note that LFH is an efficient method which can be used for training large-scale supervised hashing problems. But the training efficiency is not the focus of this paper., including unsupervised methods, supervised methods with hand-crafted features, and deep hashing methods with feature learning.

To further verify the importance of simultaneous feature learning and hash-code learning, we design a variant of DPSH, called DPSH0, which does not update the parameter of the first seven layers (CNN-F layers) during learning. Hence, DPSH0 just uses the CNN-F for feature extraction, and then based on the extracted features to learn hash functions. The hash function learning procedure will give no feedback to the feature extraction procedure. By comparing DPSH to DPSH0, we find that DPSH can dramatically outperform DPSH0. It means that integrating feature learning and hash-code learning into the same framework in an end-to-end way can get a better solution than that without end-to-end learning.

4.4 Comparison to Baselines with Ranking Labels

The experimental results are shown in Table 4. Please note that the results of DPSH in Table 4 are different from those in Table 4, because the experimental settings are different. The results of DSRH, DSCH and DRSCH are directly from [Zhang et al.2015]. From Table 4, we can find that DPSH with pairwise labels can also dramatically outperform other baselines with triplet labels. Please note that DSRH, DSCH and DRSCH can also perform simultaneously feature learning and hash-code learning in an end-to-end framework.

Figure 2 shows the effect of the hyper-parameter η. We can find that DPSH is not sensitive to η in a large range. For example, DPSH can achieve good performance on both datasets with 10≤η≤100.

In this paper, we have proposed a novel deep hashing methods, called DPSH, for settings with pairwise labels. To the best of our knowledge, DPSH is the first method which can perform simultaneous feature learning and hash-code learning for applications with pairwise labels. Because different components in DPSH can give feedback to each other, DPSH can learn better codes than other methods without end-to-end architecture. Experiments on real datasets show that DPSH can outperform other methods to achieve the state-of-the-art performance in image retrieval applications.