Recommender system has been more and more popular and widely used in many applications recently. The increasing information available, not only in quantities but also in types, leads to a big challenge for recommender system that how to leverage these rich information to get a better performance. Most traditional approaches try to design a specific model for each scenario, which demands great efforts in developing and modifying models. In this technical report, we describe our implementation of feature-based matrix factorization. This model is an abstract of many variants of matrix factorization models, and new types of information can be utilized by simply defining new features, without modifying any lines of code. Using the toolkit, we built the best single model reported on track 1 of KDDCup'11. 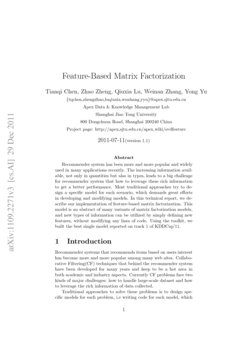 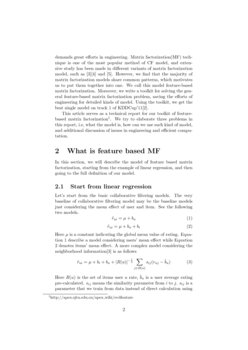 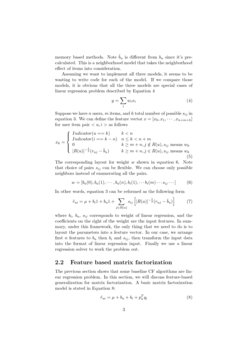 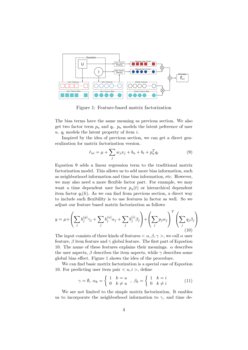 Recommender systems that recommends items based on users interest has become more and more popular among many web sites. Collaborative Filtering(CF) techniques that behind the recommender system have been developed for many years and keep to be a hot area in both academic and industry aspects. Currently CF problems face two kinds of major challenges: how to handle large-scale dataset and how to leverage the rich information of data collected.

This article serves as a technical report for our toolkit of feature-based matrix factorization111http://apex.sjtu.edu.cn/apex_wiki/svdfeature. We try to elaborate three problems in this report, i.e, what the model is, how can we use such kind of model, and additional discussion of issues in engineering and efficient computation.

2 What is feature based MF

In this section, we will describe the model of feature based matrix factorization, starting from the example of linear regression, and then going to the full definition of our model.

Here R(u) is the set of items user u rate, ¯bu is a user average rating pre-calculated. sij means the similarity parameter from i to j. sij is a parameter that we train from data instead of direct calculation using memory based methods. Note ¯bu is different from bu since it’s pre-calculated. This is a neighborhood model that takes the neighborhood effect of items into consideration.

Assuming we want to implement all three models, it seems to be wasting to write code for each of the model. If we compare those models, it is obvious that all the three models are special cases of linear regression problem described by Equation 4

Suppose we have n users, m items, and h total number of possible sij in equation 3

. We can define the feature vector

The corresponding layout for weight w shown in equation 6. Note that choice of pairs sij can be flexible. We can choose only possible neighbors instead of enumerating all the pairs.

In other words, equation 3 can be reformed as the following form

where bi, bu, sij corresponds to weight of linear regression, and the coefficients on the right of the weight are the input features. In summary, under this framework, the only thing that we need to do is to layout the parameters into a feature vector. In our case, we arrange first n features to bu then bi and sij, then transform the input data into the format of linear regression input. Finally we use a linear regression solver to work the problem out.

Inspired by the idea of previous section, we can get a direct generalization for matrix factorization version.

Equation 9 adds a linear regression term to the traditional matrix factorization model. This allows us to add more bias information, such as neighborhood information and time bias information, etc. However, we may also need a more flexible factor part. For example, we may want a time dependent user factor pu(t) or hierarchical dependent item factor qi(h). As we can find from previous section, a direct way to include such flexibility is to use features in factor as well. So we adjust our feature based matrix factorization as follows

The input consists of three kinds of features <α,β,γ>, we call α user feature, β item feature and γ global feature. The first part of Equation 10. The name of these features explains their meanings. α describes the user aspects, β describes the item aspects, while γ describes some global bias effect. Figure 1 shows the idea of the procedure.

We can find basic matrix factorization is a special case of Equation 10. For predicting user item pair <u,i>, define

We are not limited to the simple matrix factorization. It enables us to incorporate the neighborhood information to γ, and time dependent user factor by modifying α. Section 3 will present a detailed description of this.

There, you need to choose an active function

to the output of the feature based matrix factorization. Similarly, you can also try various of loss functions for loss estimation. The final version of the model is

Common choice of active functions and loss are listed as follows:

To update the model, we use the following update rule

Here ^e=r−^r the difference between true rate and predicted rate. This rule is valid for both logistic likelihood loss and L2 loss. For other loss, we shall modify ^e to be corresponding gradient. η is the learning rate and the λs are regularization parameters that defines the strength of regularization.

3 What information can be included

In this section, we will present some examples to illustrate the usage of our feature-based matrix factorization model.

And the corresponding feature representation is

For the ranking model, we are interested in the order of two items i,j given a user u. A pairwise ranking model is described as follows

by using sigmoid and log-likelihood as loss function. Note that the feature representation gives one extra bu which is not desirable. We can removed it by give high regularization to bu that penalize it to 0.

using user feature. For example, we can define a time interpolation model as follows

Here e and s mean start and end of the time of all the ratings. A rating that’s rated later will be affected more by pe and be and earlier ratings will be more affected by ps and bs. For this model, we can define

Note we first arrange the ps in the first n features then pe in next n features.

A model that include neighborhood information[3] can be described as below:

We only need to implement neighborhood information to global features as described by Section 2.1.

In Yahoo! Music Dataset[2], some tracks belongs to same artist. We can include such hierarchical information by adding it to item feature. The model is described as follows

Here t means track and a denotes corresponding artist. This model can be formalized as feature-based matrix factorization by redefining item feature.

Feature-based matrix factorization can naturally incorporate implicit and explicit information. We can simply add these information to user feature α. The model configuration is shown as follows:

Although Equation 34 shows that we can easily incorporate implicit and explicit information into the model, it’s actually very costly to run the stochastic gradient training, since the update cost is linear to the size of nonzero entries of α, and α can be very large if a user has rated many items. This will greatly slow down the training speed. We need to use an optimized method to do training. To show the idea of the optimized method, let’s first define a derived user implicit and explicit factor pim as follows:

The resulted difference in pim is given by

Given a group of samples with the same user, we need to do gradient descent on each of the training sample. The simplest way is to do the following steps for each sample: (1) calculate pim to get prediction (2) update all dj associates with implicit and explicit feedback. Every time pim has to be recalculated using updated dj in this way. However, we can find that to get new pim, we don’t need to update each dj. Instead, we only need to update pim using Equation 37. What’s more, we can find there is a relation between Δpim and Δdj as follows:

We shall emphasize that Equation 38 is true even for multiple updates, given the condition that the user is same in all the samples. We shall mention that the above analysis doesn’t consider the regularization term. If L2 regularization of dj is used during the update as follows:

However, the relation in Equation 38 no longer holds strictly. But we can still use the relation since it approximately holds when regularization term is small. Using the results we obtained, we can develop a fast algorithm for feature-based matrix factorization with implicit and explicit feedback information. The algorithm is shown in Algorithm 1.

5 How large-scale data is handled

Recommender system confronts the problem of large-scale data in practice. This is a must when dealing with real problems. For example Yahoo! Music Dataset[2] consists of more than 200M ratings. A toolkit that’s robust to input data size is desirable for real applications.

Therefore, our solution requires the input feature to be previously shuffled, then a buffering program will create a binary buffer from the input feature. The training procedure reads the data from hard-disk and uses stochastic gradient descend to train the model. This buffering approach makes the memory cost invariant to the input data size, and allows us to train models over large-scale of input data so long as the parameters fit into memory.

Although input data buffering can solve the problem of large-scale data, it still suffers from the cost of reading the data from hard-disk. To minimize the cost of I/O, we use a pre-fetching strategy. We create a independent thread to fetch the buffer data into a memory queue, then the training program reads the data from memory queue and do training. The procedure is shown in Figure 2

This pipeline style of execution removes the burden of I/O from the training thread. So long as I/O speed is similar or faster to training speed, the cost of I/O is negligible, and our our experience on KDDCup’11 proves the success of this strategy. With input buffering and pipeline execution, we can train a model with test RMSE=22.16 for track1 in KDDCup’11222kddcup.yahoo.com using less than 2G of memory, without significantly increasing of training time.

The most related work of feature based matrix factorization is Factorization Machine [6]. The reader can refer to libFM333http://www.libfm.org for a toolkit for factorization machine. Strictly speaking, our toolkit implement a restricted case of factorization machine and is more useful in some aspects. We can support global feature that doesn’t need to be take into factorization part, which is important for bias features such as user day bias, neighborhood based features, etc. The divide of features also gives hints for model design. For global features, we shall consider what aspect may influence the overall rating. For user and item features, we shall consider how to describe the user preference and item property better. Our model is also related to [1] and [9]

, the difference is that in feature-based matrix factorization, the user/item feature can associate with temporal information and other context information to better describe the preference or property in current context. Our current model also has shortcomings. The model doesn’t support multiple distinct factorizations at present. For example, sometimes we may want to introduce user vs time tensor factorization together with user vs item factorization. We will try our best to overcome these drawbacks in the future works.