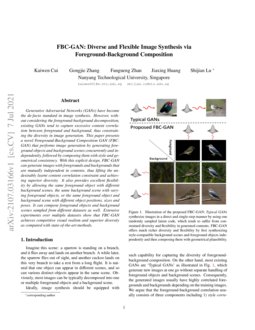 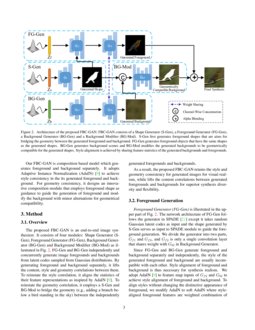 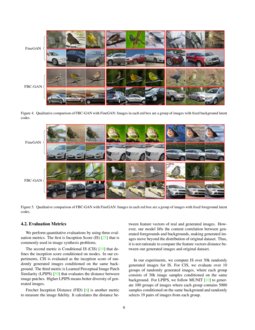 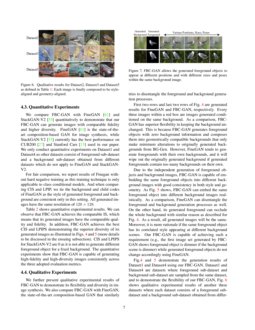 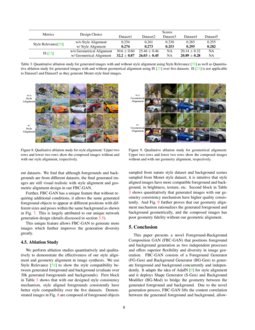 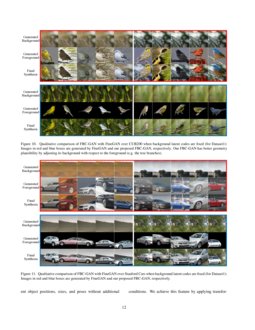 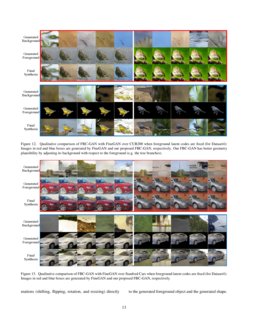 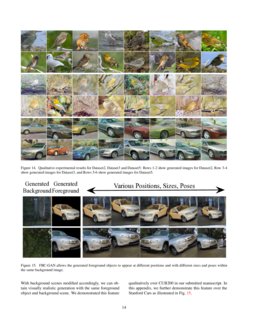 A Layer-Based Sequential Framework for Scene Generation with GANs

In this paper, we introduce a new method for generating an object image ...
Hyojin Park, et al. ∙

To See in the Dark: N2DGAN for Background Modeling in Nighttime Scene

Due to the deteriorated conditions of lack and uneven lighting, nightti...
Zhenfeng Zhu, et al. ∙

Dealing with the inconsistency between a foreground object and a backgro...
Fangneng Zhan, et al. ∙

Imagine this scene: a sparrow is standing on a branch, and it flies away and lands on another branch. A while later, the sparrow flies out of sight, and another cuckoo lands on this very branch to take a rest from a long flight. It is natural that one object can appear in different scenes, and so can various distinct objects appear in the same scene. Obviously, most images can be typically decomposed into one or multiple foreground objects and a background scene.

Although conditional GANs impose certain controls over the synthesized images, most of them suffer from constrained diversity and flexibility in the generated contents as they synthesize images at one go from a single latent code. LR-GAN [yang2017lr] and FineGAN [zhao2019image] attempt to mitigate this problem by decomposing foreground and background and generating them separately. They propose a stitching based approach that first generates background and then stitches a correlated foreground into the background. However, the stitching tends to occlude background if the generated foreground does not match the background. Our FBC-GAN generates foreground and background independently and composes them into a style-consistent and geometry-consistent image. It offers great flexibility and diversity in image generation, more details to be described in the ensuing subsections.

Image Composition. Image composition aims to overlay a masked foreground object over a background image with good consistency in both styles and geometry. To achieve style consistency, [lalonde2007photo] selects foreground objects from a database with coherent appearance for composition. [chen2019toward] uses a brightness and contrast model to adjust the foreground appearance.  [zhan2019spatial] incorporates CycleGAN [cyclegan] to align the foreground style with the background. For geometry consistency, most of the existing works [lin2018st, chen2019toward, zhan2019spatial, zhan2020aicnet, zhan2019esir, zhan2019gadan, zhan2018verisimilar, zhan2019scene]

[jaderberg2015spatial] to adjust the position, size and pose of foreground objects.

. FG-Gen and BG-Gen independently and concurrently generate image foregrounds and backgrounds from latent codes sampled from Gaussian distributions. By generating foreground and background separately, it lifts the content, style and geometry correlations between them. To reinstate the style correlation, it aligns the statistics of their feature representations as inspired by AdaIN

[huang2017arbitrary]. To reinstate the geometry correlation, it employs a S-Gen and BG-Mod to bridge the geometry (e.g., adding a branch below a bird standing in the sky) between the independently generated foregrounds and backgrounds.

As a result, the proposed FBC-GAN retains the style and geometry consistency for generated images for visual realism, while lifts the content correlations between generated foregrounds and backgrounds for superior synthesis diversity and flexibility.

Foreground Generator (FG-Gen) is illustrated in the upper part of Fig. 2. The network architecture of FG-Gen follows the generator in SPADE [park2019semantic] except it takes random Gaussian latent codes as input and the shape generated by S-Gen serves as input to SPADE module to guide the foreground generation. We divide the generator into two parts, Gf1 and Gf2, and Gf2 is only a single convolution layer that shares weight with Gb2 in Background Generator.

where Ff_sc is the style-aligned feature maps of foreground. Ff and Fb are feature map inputs of Gf2 and Gb2 respectively. α is a hyper-parameter controlling the intensity of the style alignment operation, which is empirically set to 0.2 if foregrounds and backgrounds are all nature style images (Dataset1, Dataset2 and Dataset4 introduced in section 4.1) and 0.4 if foregrounds are nature style and backgrounds are Monet style images (Dataset3 and Dataset5 introduced in section 4.1).

The loss Lbg of background generation for BG-Gen follows Lb in FineGAN [zhao2019image]. The generated foreground by FG-Gen and foreground shape by S-Gen are learned via adversarial learning with loss Lfg_adv and Ls_adv, respectively. To generate more visual details for foreground, we introduce additional feature matching loss LFM and perceptual loss LP for foreground generation and set their weights to be 10  [wang2018high]. Thus, the foreground loss Lfg can be formulated as

The preliminarily generated image y from Gb3 is learned via adversarial learning with loss Limg_adv. Inspired by the idea of GAN-CLS [reed2016generative], we align y with the generated mask mg by a matching aware discriminator Dimg_seg that implicitly discriminate between true image-segmentation pair(x, m) and two sources of fake pairs: (y, mg) and (x, mw). x is the real image, m is its corresponding foreground object mask and mw is a mismatched foreground object mask from another real image. We therefore formulate the adversarial loss for image and segmentation pair Limgseg_adv by:

The foreground object shape in y should be the same as the generted shape. This can be restricted by aligning the generated mask mg from Gb3 with the generated shape mi from S-Gen . We introduce mean square error loss Lfg_shape to achieve this alignment.

The overall loss function of the proposed FBC-GAN is:

to obtain the object shape and use VGG19 to screen out well-segmented (classification accuracy of segmented objects higher than 0.5) shapes and their corresponding images and foreground objects. As a result, there left 31979 out of 46800 image sets for ImageNet

We perform quantitative evaluations by using three evaluation metrics. The first is Inception Score (IS)

[salimans2016improved] that is commonly used in image synthesis problems.

The second metric is Conditional IS (CIS) [huang2018multimodal] that defines the inception score conditioned on modes. In our experiments, CIS is evaluated as the inception score of randomly generated images conditioned on the same background. The third metric is Learned Perceptual Image Patch Similarity (LPIPS) [zhang2018unreasonable] that evaluates the distance between image patches. Higher LPIPS means better diversity of generated images.

In our experiments, we compute IS over 30k randomly generated images for IS. For CIS, we evaluate over 10 groups of randomly generated images, where each group consists of 30k image samples conditioned on the same background. For LPIPS, we follow MUNIT [huang2018multimodal] to generate 100 groups of images where each group contains 5000 samples conditioned on the same background and randomly selects 19 pairs of images from each group.

We compare FBC-GAN with FineGAN [zhao2019image] and StackGAN-V2 [zhang2018stackgan++] quantitatively to demonstrate that our FBC-GAN can generate images with comparable fidelity and higher diversity. FineGAN [zhao2019image] is the state-of-the-art composition-based GAN for image synthesis, while StackGAN-V2 [zhang2018stackgan++] currently has the best performance on CUB200 [wah2011caltech] and Stanford Cars [krause20133d] used in our paper. We only conduct quantitative experiments on Dataset1 and Dataset4 as other datasets consist of foreground sub-dataset and a background sub-dataset obtained from different datasets which do not apply to FineGAN and StackGAN-V2.

For fair comparison, we report results of Finegan without hard negative training as this training technique is only applicable to class conditional models. And when comparing CIS and LPIP, we tie the background and child codes of FineGAN as the style of generated foreground and background are consistent only in this setting. All generated images have the same resolution of 128×128.

Table 2 shows quantitative experimental results. We can observe that FBC-GAN achieves the comparable IS, which means that its generated images have the comparable quality and fidelity. In addition, FBC-GAN achieves the best CIS and LPIPS demonstrating the superior diversity of its generated images as illustrated in Figs. 4 and 5 (more details to be discussed in the ensuing subsection). CIS and LPIPS for StackGAN-V2 are 0 as it is not able to generate different foreground object for a fixed background. The quantitative experiments show that FBC-GAN is capable of generating high-fidelity and high-diversity images consistently across the three adopted evaluation metrics.

We further present qualitative experimental results of FBC-GAN to demonstrate its flexibility and diversity in image synthesis. We also compare FBC-GAN with FineGAN, the state-of-the-art composition-based GAN that similarly tries to disentangle the foreground and background generation processes.

Further, FBC-GAN has a unique feature that without requiring additional conditions, it allows the same generated foreground objects to appear at different positions with different sizes and poses within the same background as shown in Fig. 7. This is largely attributed to our unique network generation design (details discussed in section 3.5).

We present additional experimental results over multiple data settings to demonstrate the superior flexibility and diversity as well as generality of our proposed FBC-GAN.

In addition, it is natural that the style of foreground object(s) should be consistent with the corresponding background. With this in mind, our proposed FBC-GAN can adjust the styles of foreground objects to be compatible with the separately generated background, making the final synthesized image more visually realistic. However, FineGAN lacks this desirable property.

We defined 5 datasets in this work. We further present more illustrations in Figs. 10 and 12 for Dataset1, and Figs. 11 and 13 for Dataset4. In addition, Fig. 14 shows several generation samples for Dataset2, Dataset3 and Dataset5. The successful generation over these 5 datasets demonstrates the generality of our proposed FBC-GAN. Additionally, it shows that our FBC-GAN can sample foregrounds and backgrounds from either same dataset or different datasets. This feature lays the foundation for flexible and diverse image generation with our FBC-GAN.