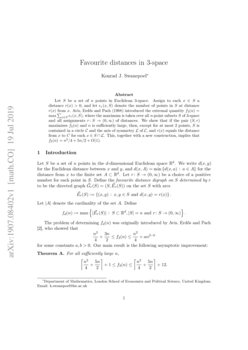 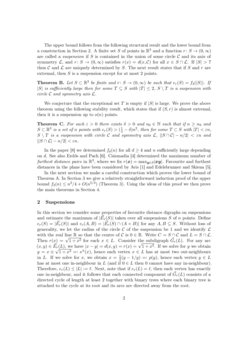 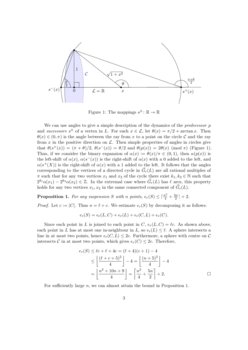 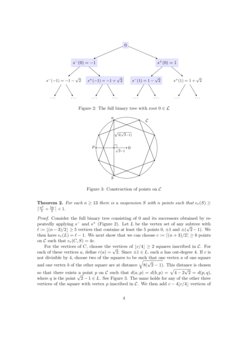 Distinct distances in the complex plane

Geodesic Spanners for Points in ℝ^3 amid Axis-parallel Boxes

Let P be a set of n points in ℝ^3 amid a bounded number of obstacles. Wh...
Mohammad Ali Abam, et al. ∙

Let S be a set of n points and let w be a function that assigns non-nega...
R. Inkulu, et al. ∙

Let P be a simple polygon, then the art gallery problem is looking for a...
Daniel Bertschinger, et al. ∙

How many copies of a parallelepiped are needed to ensure that for every ...
Senja Barthel, et al. ∙

Implicit bias of any algorithm: bounding bias via margin

Let S be a set of n points in the d-dimensional Euclidean space Rd. We write d(x,y) for the Euclidean distance between x and y, and d(x,A)=min{d(x,a):a∈A} for the distance from x to the finite set A⊂Rd. Let r:S→(0,∞) be a choice of a positive number for each point in S. Define the favourite distance digraph on S determined by r to be the directed graph →Gr(S)=(S,→Er(S)) on the set S with arcs

Let |A| denote the cardinality of the set A. Define

The problem of determining fd(n) was originally introduced by Avis, Erdős and Pach [2], who showed that

for some constants a,b>0. Our main result is the following asymptotic improvement:

For all sufficiently large n,

The upper bound follows from the following structural result and the lower bound from a construction in Section 2. A finite set S of points in R3 and a function r:S→(0,∞) are called a suspension if S is contained in the union of some circle C and its axis of symmetry L, and r:S→(0,∞) satisfies r(x)=d(x,C) for all x∈S∩L. If |S|>7 then C and L are uniquely determined by S. The next result states that if S and r are extremal, then S is a suspension except for at most 2 points.

We conjecture that the exceptional set T is empty if |S| is large. We prove the above theorem using the following stability result, which states that if (S,r) is almost extremal, then it is a suspension up to o(n) points.

In the paper [8] we determined fd(n) for all d≥4 and n sufficiently large depending on d. See also Erdős and Pach [6]. Csizmadia [4] determined the maximum number of furthest distance pairs in R3, where we fix r(x)=maxy∈S|xy|. Favourite and furthest distances in the plane have been considered by Avis [1] and Edelsbrunner and Skiena [5].

In the next section we make a careful construction which proves the lower bound of Theorem A. In Section 3 we give a relatively straightforward induction proof of the upper bound f3(n)≤n2/4+O(n5/3) (Theorem 3). Using the ideas of this proof we then prove the main theorems in Section 4.

For sufficiently large n, we can almost attain the bound in Proposition 1.

Consider the full binary tree consisting of 0 and its successors obtained by repeatedly applying s− and s+ (Figure 2).

The same holds for any of the other three vertices of the square with vertex p inscribed in C. We then add c−4⌊c/4⌋ vertices of this square to C and define r(p)=√4−2√2 for each of these vertices p, to obtain a set C of exactly c points such that er(C,S)=4c. Then

If the upper bound of Proposition 1 is attained, it would have to be because of a very special algebraic coincidence, and we believe that this is not possible. The following observation may help to prove this. For a point x∈C let φ(x) be the angle ∢x0y, where y∈C satisfies d(x,y)=r(x). Then r(x)=2sinφ(x)2. If also (x,z)∈→Er(S) where z∈L, then it follows from r(x)=d(x,z)=√1+z2 by elementary trigonometrical relations that sinθ(z)sinφ(x)2=1/2. It follows from a result of M. Newman [7] that there are only two solutions to this equation with both θ(z) and φ(x) rational multiples of π in the interval (0,π), namely (θ(z),φ(x))=(π/4,π/2) and (θ(z),φ(x))=(π/2,π/3). The first solution corresponds to our construction in Theorem 2, while the second solution correspond to an analogous construction with inscribed regular hexagons, which turns out to be worse than our construction.

We will use the Kővari-Sós-Turán Theorem in the standard form and in a form for directed graphs. See for instance [3, Theorem 2.2].

Apply the Kővari-Sós-Turán Theorem I to the bipartite double cover of G. ∎

The following upper bound improves the error term from [2]. The proof uses an induction argument which, although conceptually simple, needs some computation.

Fix a constant p≥3, to be determined later. The Kővari–Sós–Turán Theorem II guarantees the existence of a n0=n0(p) such that any directed graph on n≥n0 vertices and with at least 0.23n2 edges contains a →Kp,p. We can ensure that the theorem holds for all n≤n0 by taking A=A(n0) large enough. Assume next that n>n0 and that the theorem holds for sets of up to n−1 points.

Without loss of generality, er(S)≥0.23n2. Let L and C be the two classes of a →Kℓ,c contained in →Gr(S) chosen such that ℓ+c is maximal among all such →Kℓ,c, where ℓ:=|L|, c:=|C| and ℓ,c≥p. Then C lies on a circle C and L on its axis of symmetry L, and r(p)=d(p,C) for each p∈L. That is, C∪L forms a suspension of maximum cardinality among all those contained in S with |C|,|L|≥p. Let T=S∖(C∪L) and write t:=|T|. We will bound er(S) by writing it as the following sum and then bounding each term separately.

Suppose that some x∈T has at least two in-neighbours y1,y2∈L, say. It then follows that x lies on the intersection of the spheres with centre yi and radius r(yi)=r(yi,C), i=1,2, which is the circle C. This contradicts the maximality of C∪L. Therefore, er(L,T)≤t.

Finally, we estimate er(T)≤t2/4+At5/3 by the induction hypothesis:

which will be ≤14n2+An5/3, thus finishing the induction step, if

We next show that (1) holds if n−t is sufficiently large. Since n−t≥2p, we can ensure that n−t is large by choosing p large.

First suppose that t≥n/2. The inequality (1) will follow if

This inequality is equivalent to

which can be ensured. This finishes the induction step. ∎

Proceed as in the proof of Theorem 3, but instead of applying an induction hypothesis to T, apply Theorem 3 itself to T. ∎

4 Proof of the main theorems

for n sufficiently large depending on δ and A. The resulting quadratic inequality in t implies that

Thus, either t or n−t is small. We next show that n−t is not small. Recall from the proof of Theorem 3 that the suspension C∪L was chosen such that c+ℓ is maximised subject to ℓ,c≥p. This implies that the favourite distance digraph →Gr(S) does not contain a →Kp,n−t, hence by the Kővari-Sós-Turán Theorem II,

which gives a contradiction if δ is sufficiently small and n sufficiently large, both depending on p. Therefore,

if δ is sufficiently small depending on ε.

Proof of Theorem B.

By Theorem C we can also assume that t≤n/4 by making n sufficiently large. It follows that

Proof of Theorem A.

The lower bound is given by Theorem 2. Consider an extremal example with sufficiently many points so that Theorem B can be applied.

If T is empty, then S is a suspension, and Proposition 1 provides the upper bound.

where the separate estimates are made as in the proof of Theorem 3.