In the paper, we aim to train a unified model that performs three tasks: Facial Action Units (FAU) prediction, seven basic facial expressions prediction, as well as valence and arousal prediction. The main challenge of this task is the lack of fully-annotated dataset. Most of existing datasets only contain one or two types of labels. To tackle this challenge, we propose an algorithm for the multitask model to learn from partial labels. The algorithm has two steps: first, we train a teacher model to perform all three tasks, where each instance is trained by the ground truth label of its corresponding task. Second, we refer to the outputs of the teacher model as the soft labels. We use the soft labels and the ground truths to train the student model. We find that the student model outperforms the teacher model on all the tasks, possibly due to the exposure to the full set of labels. Finally, we use ensemble modeling to boost the performance further on the three tasks. 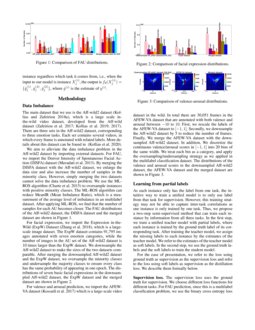 In this paper, we aim to tackle two challenges in video emotion recognition: data imbalance and partial labels.

The problem of imbalanced-data is very common in single-label and multi-label classification datasets for emotion recognition. For example, the FER2013 dataset [2] consists of 35,887 facial images, where each image is annotated with 7 basic emotions (angry, disgust, fear, happy, sad, surprise and neutral). However, among all images, about 25% of images are labeled with ”happy”, while only 1.5%

The problem of partial labels (missing labels) is defined as the incomplete labels in the training data of multitask learning. We aim to solve this partial labels problem, because we seek a unified solution for FAU, facial expressions, as well as valence and arousal. However very few emotion datasets have the full set of aforementioned labels. An intuitive solution is Binary Relevance (BR), which trains one classifier for each class, regardless of the presence of the labels for other classes. However, BR fails to model the correlations between different labels. And it is not efficient to train many classifiers, especially when the number of labels increases. To overcome these shortcomings, we propose to use a shared feature extractor for all tasks, and use multiple heads on top of the feature extractor as classifiers. To better learn inter-task correlations with incomplete labels, we first train a teacher model with partial labels, and then use the outputs of the teacher model as supervision for the student models. There are other studies which try to tackle this problem

[9, 7]. Our method is different from theirs by the ways to complete the partial labels.

is the estimate of

The main dataset that we use is the Aff-wild2 dataset [8], which is a large scale in-the-wild video dataset, developed from the Aff-wild dataset [12, 6, 4]. There are three sets in the Aff-wild2 dataset, corresponding to three emotion tasks. Each set contains several videos, in which every frame is annotated with related labels. More details about this dataset can be found in  [5].

We aim to alleviate the data imbalance problem in the Aff-wild2 dataset by importing external datasets. For FAU, we import the Denver Intensity of Spontaneous Facial Action (DISFA) dataset [11]. By merging the DISFA dataset with the Aff-wild2 dataset, we enlarge the data size and also increase the number of samples in the minority class. However, simply merging the two datasets cannot solve the data imbalance problem. We use the ML-ROS algorithm [1] to oversample instances with positive minority classes. The ML-ROS algorithm can reduce MeanIR (Mean Imbalance Ratio), which is a measurement of the average level of imbalance in an multilabel dataset. After applying ML-ROS, we find that the number of samples for each AU becomes closer. The FAU distributions of the Aff-wild2 dataset, the DISFA dataset and the merged dataset are shown in Figure 1.

For facial expression, we import the Expression in-the-Wild (ExpW) Dataset [13]

As each instance only has the label from one task, the intuitive way to train a unified model is to only use label from that task for supervision. However, this training strategy may not be able to capture inter-task correlations as one instance is only trained by one task. Thus, we propose a two-step semi-supervised method that can train each instance by information from all three tasks. In the first step, we train a unified teacher model with partial labels, where each instance is trained by the ground truth label of its corresponding task. After training the teacher model, we assign the missing labels to each instance by the estimates of the teacher model. We refer to the estimates of the teacher model as soft labels. In the second step, we use the ground truth labels and the soft labels to train the student model.

The supervision loss uses the ground truth for supervision. We choose different loss functions for different tasks. For FAU prediction, since this is a multilabel classification problem, we use the binary cross entropy loss for each AU, defined as follows:

For facial expression prediction, since it is a multiclass classification problem, we use the categorical cross entropy loss, defined as follows:

For valence and arousal prediction, it is a regression problem. We discretize the continuous labels into 20 categorical labels and then combine the classification loss with the regression loss as follows:

where the first term is the categorical cross-entropy loss and the second term is the negative Concordance Correlation Coefficient (CCC). The subscript ∗

indicates the value is a discretized one-hot vector instead of a continuous value. In CCC,

ρ is the correlation coefficient between the ground truth and the prediction (continuous). σ and ^σ

are the standard deviations of the ground truth and the prediction, respectively.

are the means. To transform the output probabilities to continuous values, we simply calculate the expectation given the probability distribution.

We linearly combine the loss functions for the three tasks. The overall loss function for the teacher model is defined as follows:

where the temperature T is set to 1.5, and we omit the task index here. The KL divergence KL(p,q)=∑ipilog(piqi) measures the difference between two probability distributions.

For AU prediction, the distillation loss we use is the binary cross entropy loss between the teacher model outputs and the student model outputs:

Similarly, the total distillation loss Ld is the linear combination of Eqs. (5) and (6).

About evaluation metrics, we keep them consistent with the metrics used in

We train single-task CNN models for all three tasks, with imbalanced dataset and balanced datset. The results are reported in Table 1. After applying our data balancing techniques, we find that the performance of single-task CNN was improved by a large margin for FAU and facial expression prediction. But the improvement for the regression tasks (valence and arousal) is not obvious. Considering its impact on the other tasks, we consistently apply our data balancing techniques for the rest of the experiments.

For CNN-RNN architectures, we only train the multi-task models. We set the image sequence length to be 32. Note that we use the parameter of the best CNN model to initialize the feature extractor in CNN-RNN model. In our experiments, it is the Student0 model in Table 2. The performance of the multitask CNN-RNN models are reported in Table 3. The number of students is also set to 5. Among the student models, we find some of them can outperform the teacher model. The student ensemble performs the best among all these models.

In this paper, we explored the data balancing techniques and applied them to multitask emotion recognition task. We proposed an algorithm for the multitask model to learn from partial labels, which consists of the teacher model training and the student model training. Our results prove that every student model outperforms the teacher model on almost all tasks, which might due to the benefit of full set of labels and softened probabilities.