Users can be supported to adopt healthy behaviors, such as regular physical activity, via relevant and timely suggestions on their mobile devices. Recently, reinforcement learning algorithms have been found to be effective for learning the optimal context under which to provide suggestions. However, these algorithms are not necessarily designed for the constraints posed by mobile health (mHealth) settings, that they be efficient, domain-informed and computationally affordable. We propose an algorithm for providing physical activity suggestions in mHealth settings. Using domain-science, we formulate a contextual bandit algorithm which makes use of a linear mixed effects model. We then introduce a procedure to efficiently perform hyper-parameter updating, using far less computational resources than competing approaches. Not only is our approach computationally efficient, it is also easily implemented with closed form matrix algebraic updates and we show improvements over state of the art approaches both in speed and accuracy of up to 99 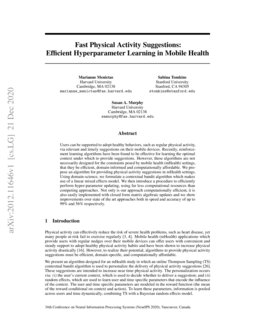 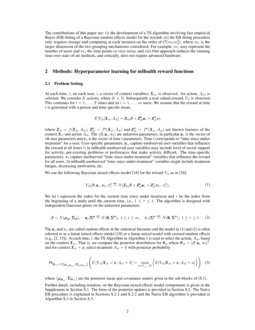 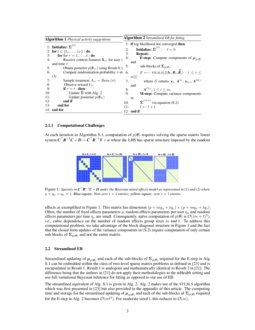 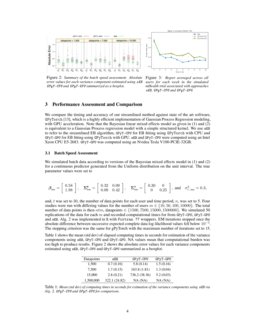 Physical activity can effectively reduce the risk of severe health problems, such as heart disease, yet many people at-risk fail to exercise regularly berlin1990meta ; billinger2014physical . Mobile health (mHealth) applications which provide users with regular nudges over their mobile devices can offer users with convenient and steady support to adopt healthy physical activity habits and have been shown to increase physical activity drastically klasnja2019efficacy . However, to realize their potential, algorithms to provide physical activity suggestions must be efficient, domain-specific, and computationally affordable.

tomkins2020intelligentpooling . These suggestions are intended to increase near time physical activity. The personalization occurs via: (i) the user’s current context, which is used to decide whether to deliver a suggestion; and (ii) random effects, which are used to learn user and time specific parameters that encode the influence of the context. The user and time specific parameters are modeled in the reward function (the mean of the reward conditional on context and action). To learn these parameters, information is pooled across users and time dynamically, combining TS with a Bayesian random effects model.

The contributions of this paper are: (i) the development of a TS algorithm involving fast empirical Bayes (EB) fitting of a Bayesian random effects model for the reward; (ii) the EB fitting procedure only requires storage and computing at each iteration on the order of O(m1m32), where m1 is the larger dimension of the two grouping mechanisms considered. For example, m1 may represent the number of users and m2 the time points or vice-versa; and (iii) Our approach reduces the running time over state-of-art methods, and critically, does not require advanced hardware.

, a vector of context variables,

{X}it, is observed. An action, Ait, is selected. We consider K actions, where K∈N. Subsequently a real-valued reward, Yit is observed. This continues for t=1,…,T times and on i=1,…,m users. We assume that the reward at time t is generated with a person and time specific mean,

We use the following Bayesian mixed effects model laird1982random for the reward Yit as in tomkins2020intelligentpooling :

We let t represent the index for the current time since under treatment and τ be the index from the beginning of a study until the current time, i.e., 1≤τ≤t. The algorithm is designed with independent Gaussian priors on the unknown parameters:

or a linear mixed model with crossed random effects (e.g.,

baayen2008mixed ; jeon2017variational ). At each time, t, the TS Algorithm in Algorithm 1 is used to select the action, Ait, based on the context {X}it. That is, we compute the posterior distribution for θit where θit=[β{u}ivt]T and for context {X}it={x}, select treatment Ait=k

where (μθit,Σθit) are the posterior mean and covariance matrix given in the sub-blocks of (S.1).

do not apply their methodologies to the mHealth setting and use full variational Bayesian inference for fitting as opposed to our use of EB.

The streamlined equivalent of Alg. S.1 is given in Alg. 2. Alg. 2 makes use of the STLSLS algorithm which was first presented in nolan2019streamlined but also provided in the appendix of this article. The computing time and storage for the streamlined updating of μp(θ) and each of the sub-blocks of Σp(θ) required for the E-step in Alg. 2 becomes O(mt3). For moderate sized t, this reduces to O(m).

We compare the timing and accuracy of our streamlined method against state of the art software, GPyTorch gardner2018gpytorch , which is a highly efficient implementation of Gaussian Process Regression modeling, with GPU acceleration. Note that the Bayesian linear mixed effects model as given in (1) and (2) is equivalent to a Gaussian Process regression model with a simple structured kernel. We use sEB to refer to the streamlined EB algorithm, GPyT-CPU for EB fitting using GPyTorch with CPU and GPyT-GPU for EB fitting using GPyTorch with GPU. sEB and GPyT-CPU were computed using an Intel Xeon CPU E5-2683. GPyT-GPU was computed using an Nvidea Tesla V100-PCIE-32GB.

) for a continuous predictor generated from the Uniform distribution on the unit interval. The true parameter values were set to

and, t was set to 30, the number of data points for each user and time period, n, was set to 5. Four studies were run with differing values for the number of users m∈{10,50,100,10000}. The total number of data points is then ntm, datapoints∈{1500,7500,15000,1500000}. We simulated 50 replications of the data for each m and recorded computational times for from GPyT-CPU, GPyT-GPU and sEB. Alg. 2 was implemented in R with Fortran 77 wrappers. EM iterations stopped once the absolute difference between successive expected complete data log-likelihood values fell below 10−5. The stopping criterion was the same for gPyTorch with the maximum number of iterations set to 15.

Next, we evaluate our approach in a simulated mHealth study designed to capture many of the real-world difficulties of mHealth clinical trials. Users in this simulated study are sent interventions multiple times each day according to Alg. 1. Each intervention represents a message promoting healthy behavior. In this setting there are 32 users and each user is in the study for 10 weeks. Users join the study in a staggered fashion, such that each week new users might be joining or leaving the study. Each day in the study users can receive up to 5 mHealth interventions.

In Figure 3 we show the ability of our streamlined algorithm to minimize regret where real data is used to inform the simulation. We also compare our approach to GPyT-CPU and GPyT-GPU. For all users we show the average performance for their n

th week in the study. For example, we first show the average regret across all users in their first week of the study, however this will not be the same calendar time week, as users join in a staggered manner. The average total time (standard deviation) for estimation of the variance components was 757.1 (76.48) using

Inspection of the computational times in Table 1 shows sEB achieving the lowest average time across all simulations and data set sizes, compared to GPyT-CPU and GPyT-GPU. In the starkest case this results in a 98.96% reduction in running time. Even in the more modest comparison, sEB timing is similar to that of GPyT-GPU but doesn’t require advanced hardware.

We define the following data matrices

The posterior distribution θit for the immediate treatment effect for user i at time t is updated and then used to assign treatment in the subsequent time point, t+1. Here, we show the form of the full posterior for θ=[β {u} v]⊤. Define

The focus of this work is to enable fast incremental estimation of the variance components Σ≡(σ2ε,Σ{u},Σv). We describe a natural, but computationally challenging approach for estimating these variances in Section S.2.1 and our streamlined alternative approach in Section 2.2.

The maximization is commonly done via the Expectation Maximisation (EM) algorithm [9].

The expected complete data log likelihood is given by L(Σ)=E[logp({Y}|θ,Σ)+logp(θ|Σ)] where the expectation is over the distribution of θ=[β {u} v]⊤ given in (2). The M-step yields the following closed form (ℓ+1) iteration estimates for the variance components in ^Σ(ℓ+1):

are computed in the E-step using equation (S.1). Note that (S.3) are the sub vectors in the the posterior mean μp(θ) and (S.4) are sub-block entries in the posterior variance covariance matrix Σp(θ). The naïve EM algorithm is given in Alg. S.1. The challenge in Alg. S.1 is computation of the posterior at each iteration.

(Analogous to Result 2 in [21]). The posterior updates under the Bayesian mixed effects model as given in (1) and (2) for μp(θ) and each of the sub-blocks of Σp(θ) are expressible as a two-level sparse matrix least squares problem of the form ||b−{B} μp(θ)||2 where b and the non-zero sub-blocks of B, according to the notation in the appendix, are, for 1≤i≤m,

with each of these matrices having ~n=t+p+tqv+qu rows. The solutions are

The STLSLS algorithm is listed in [24] and based on Theorem 2 of [24]. Given its centrality to Algorithm 2 we list it again here. The algorithm solves a sparse version of the the least squares problem:

The sub-vectors of x and the sub-matrices of A corresponding to its non-zero blocks of are labelled as follows:

with × denoting sub-blocks that are not of interest. The STLSLS algorithm is given in Algorithm S.2.

The fundamental streamlined EB Algorithm 2 makes use of linear system solutions and sub-block matrix inverses for two-level sparse matrix problems ([24]). Our result for streamlined posterior computation in Section 2.2 is analogous and mathematically identical to Result 2 in [21] who instead focus on streamlined mean field variational Bayes approximate inference for linear mixed models with crossed random effects. In the present article, we make use of a similar result for EB posterior inference for use in the mHealth setting. Our EB algorithm allows streamlined estimation of the variance components within an online TS contextual bandit algorithm.

Other approaches include using mixed model software packages for high-performance statistical computation. For example: (i) BLME provides a posteriori estimation for linear and generalized linear mixed effects models in a Bayesian setting [12]; and (ii) Stan [6]

provides full Bayesian statistical inference with MCMC sampling. Even though

BLME offers streamlined algorithms for obtaining the predictions of fixed and random effects in linear mixed models, the sub-blocks of the covariance matrices of the posterior required for construction of the EM method in the streamlined empirical Bayes algorithm are not provided by such software. On the other hand, Stan does offer support for computation of these sub-blocks, but is well known to suffer computationally in large data settings.

As we point to in Section 3, the Gaussian linear mixed effects model used in the Thompson-Sampling algorithm is equivalent to a Gaussian Process regression model with a structured kernel matrix induced by the use of random effects. Gaussian process models have been used for multi-armed bandits [8, 14, 1, 25, 10, 27, 11, 5], and for contextual bandits [19, 17]. To address the challenges posed by mHealth, [26] illustrate the benefits of using mixed effects Gaussian Process models in the context of reinforcement learning. Computational challenges in the Gaussian Process regression setting is a known and common problem which has led to contributions from the computer science and machine learning communities. For instance, to address challenges posed for Gaussian Process regression suffering from cubic complexity to data size, a variety of scalable GPs have been presented, including the approach we compare to earlier: GPyTorch [13]. A review on state-of-the-art scalable GPs involving two main categories: global approximations which distillate the entire data and local approximations which divide the data for subspace learning can be found in [20]. The sparsity imposed by the use of random effects, however, afford us accurate inference in the cases considered in this article, and thus do not suffer from the potential loss of accuracy that could result from the approximate methods, such as those discussed in [20].