When performing Bayesian data analysis using a general linear mixed model, the resulting posterior density is almost always analytically intractable. However, if proper conditionally conjugate priors are used, there is a simple two-block Gibbs sampler that is geometrically ergodic in nearly all practical settings, including situations where p > n (Abrahamsen and Hobert, 2017). Unfortunately, the (conditionally conjugate) multivariate normal prior on β does not perform well in the high-dimensional setting where p ≫ n. In this paper, we consider an alternative model in which the multivariate normal prior is replaced by the normal-gamma shrinkage prior developed by Griffin and Brown (2010). This change leads to a much more complex posterior density, and we develop a simple MCMC algorithm for exploring it. This algorithm, which has both deterministic and random scan components, is easier to analyze than the more obvious three-step Gibbs sampler. Indeed, we prove that the new algorithm is geometrically ergodic in most practical settings. 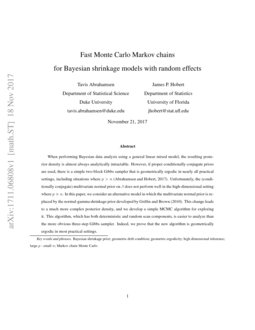 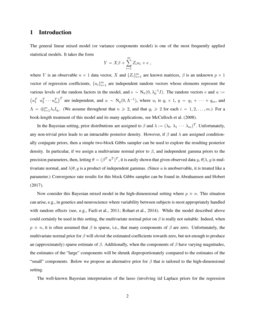 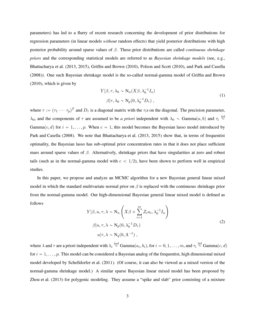 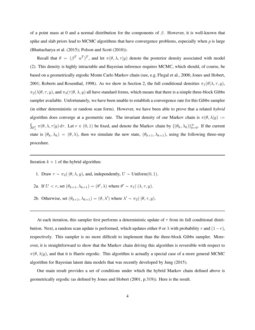 The general linear mixed model (or variance components model) is one of the most frequently applied statistical models. It takes the form

where Y is an observable n×1

X and {Zi}mi=1 are known matrices, β is an unknown p×1 vector of regression coefficients, {ui}mi=1 are independent random vectors whose elements represent the various levels of the random factors in the model, and e∼Nn(0,λ−10I). The random vectors e and u:=(uT1uT2⋯uTm)T are independent, and u∼Nq(0,Λ−1), where ui is qi×1, q=q1+⋯+qm, and Λ=⊕mi=1λiIqi. (We assume throughout that n≥2, and that qi≥2 for each i=1,2,…,m.) For a book-length treatment of this model and its many applications, see McCulloch et al. (2008).

In the Bayesian setting, prior distributions are assigned to β and λ:=(λ0λ1⋯λm)T. Unfortunately, any non-trivial prior leads to an intractable posterior density. However, if β and λ are assigned conditionally conjugate priors, then a simple two-block Gibbs sampler can be used to explore the resulting posterior density. In particular, if we assign a multivariate normal prior to β, and independent gamma priors to the precision parameters, then, letting θ=(βT uT)T, it is easily shown that given observed data y, θ|λ,y is multivariate normal, and λ|θ,y is a product of independent gammas. (Since u is unobservable, it is treated like a parameter.) Convergence rate results for this block Gibbs sampler can be found in Abrahamsen and Hobert (2017).

Now consider this Bayesian mixed model in the high-dimensional setting where p≫n. This situation can arise, e.g., in genetics and neuroscience where variability between subjects is most appropriately handled with random effects (see, e.g., Fazli et al., 2011; Rohart et al., 2014). While the model described above could certainly be used in this setting, the multivariate normal prior on β is really not suitable. Indeed, when p≫n, it is often assumed that β is sparse, i.e., that many components of β are zero. Unfortunately, the multivariate normal prior for β will shrink

the estimated coefficients towards zero, but not enough to produce an (approximately) sparse estimate of

β. These prior distributions are called continuous shrinkage priors and the corresponding statistical models are referred to as Bayesian shrinkage models (see, e.g., Bhattacharya et al. (2013, 2015), Griffin and Brown (2010), Polson and Scott (2010), and Park and Casella (2008)). One such Bayesian shrinkage model is the so-called normal-gamma model of Griffin and Brown (2010), which is given by

where τ:=(τ1⋯τp)T and Dτ is a diagonal matrix with the τis on the diagonal. The precision parameter, λ0, and the components of τ are assumed to be a priori independent with λ0∼Gamma(a,b) and τiiid∼Gamma(c,d) for i=1,…,p. When c=1, this model becomes the Bayesian lasso model introduced by Park and Casella (2008). We note that Bhattacharya et al. (2013, 2015) show that, in terms of frequentist optimality, the Bayesian lasso has sub-optimal prior concentration rates in that it does not place sufficient mass around sparse values of β. Alternatively, shrinkage priors that have singularities at zero and robust tails (such as in the normal-gamma model with c<1/2), have been shown to perform well in empirical studies.

where λ and τ are a priori independent with λiind∼Gamma(ai,bi), for i=0,1,…,m, and τiiid∼Gamma(c,d) for i=1,…,p. This model can be considered a Bayesian analog of the frequentist, high dimensional mixed model developed by Schelldorfer et al. (2011). (Of course, it can also be viewed as a mixed version of the normal-gamma shrinkage model.) A similar sparse Bayesian linear mixed model has been proposed by Zhou et al. (2013)

for polygenic modeling. They assume a “spike and slab” prior consisting of a mixture of a point mass at 0 and a normal distribution for the components of

β. However, it is well-known that spike and slab priors lead to MCMC algorithms that have convergence problems, especially when p is large (Polson and Scott (2010); Bhattacharya et al. (2015)).

). This density is highly intractable and Bayesian inference requires MCMC, which should, of course, be based on a geometrically ergodic Monte Carlo Markov chain

(see, e.g. Roberts and Rosenthal, 1998; Jones and Hobert, 2001; Flegal et al., 2008). As we show in Section 2, the full conditional densities π1(θ|λ,τ,y), π2(λ|θ,τ,y), and π3(τ|θ,λ,y) all have standard forms, which means that there is a simple three-block Gibbs sampler available. Unfortunately, we have been unable to establish a convergence rate for this Gibbs sampler (in either deterministic or random scan form). However, we have been able to prove that a related hybrid algorithm does converge at a geometric rate. The invariant density of our Markov chain is π(θ,λ|y):=∫Rp+π(θ,λ,τ|y)dτ. Let r∈(0,1) be fixed, and denote the Markov chain by {(θk,λk)}∞k=0. If the current state is (θk,λk)=(θ,λ), then we simulate the new state, (θk+1,λk+1), using the following three-step procedure.

Iteration k+1 of the hybrid algorithm:

At each iteration, this sampler first performs a deterministic update of τ from its full conditional distribution. Next, a random scan update is performed, which updates either θ or λ with probability r and (1−r), respectively. This sampler is no more difficult to implement than the three-block Gibbs sampler. Moreover, it is straightforward to show that the Markov chain driving this algorithm is reversible with respect to π(θ,λ|y), and that it is Harris ergodic. This algorithm is actually a special case of a more general MCMC algorithm for Bayesian latent data models that was recently developed by Jung (2015).

Our main result provides a set of conditions under which the hybrid Markov chain defined above is geometrically ergodic (as defined by Jones and Hobert (2001, p.319)). Here is the result.

Note that the conditions of Proposition 1 are quite simple to check. We do require Z to be full column rank, which holds for most basic designs, but there is no such restriction on X, so the result is applicable when p>n. While the second condition may become restrictive when p≫n

, this can be mitigated to some extent by the fact that the user if free to choose any positive value for the hyperparameter

b0. Indeed, when a large value of a0 is required to satisfy condition (2), b0 can be chosen such that the prior mean and variance of λ0 (which are given by a0b−10 and a0b−20, respectively) have reasonable values.

Abrahamsen and Hobert (2017) established simple, easily-checked sufficient conditions for geometric ergodicity of the two-block Gibbs sampler for the standard Bayesian general linear mixed model that assigns a multivariate normal prior to β. Note, however, that unlike the multivariate normal prior, the continuous shrinkage prior that we use here is hierarchical, which means that an additional set of latent variables (the τis) must be managed, and this leads to more complicated MCMC algorithms that are more difficult to analyze. On a related note, Pal and Khare (2014) obtained geometric ergodicity results for the Gibbs sampler developed for the original normal-gamma model (without random effects). But again, adding random effects to the normal-gamma model leads to new MCMC algorithms that are more complex and harder to handle.

The remainder of this paper is organized as follows. Section 2 contains a formal definition of the Markov chain that drives our hybrid sampler. A proof of Proposition 1 is given in Section 3. Finally, a good deal of technical material, such as proofs of the lemmas that are used in the main proof, has been relegated to the Appendices.

In this section, we formally define the Markov transition function (Mtf) of the hybrid algorithm. We begin with a brief derivation of the conditional densities, πi, i=1,2,3. Let W=[XZ], R+=(0,∞), and recall that θ=(βT uT)T. The posterior density can be expressed up to a constant of proportionality as

Next, it’s clear from (3) that the components of λ

are conditionally independent, and that each has a gamma distribution. Indeed,

Thus, the τjs are conditionally independent, and

This brings us to a subtle technical problem that turns out to be very important in our convergence rate analysis. Note that, if c≤1/2 and βj=0, then the right-hand side of (8) is not integrable. Moreover, it is precisely these values of c that yield effective shrinkage priors. Of course, from a simulation standpoint, this technical problem is a non-issue because we will never observe an exact zero from the normal distribution. However, in order to perform a theoretical analysis of the Markov chain, we are obliged to define the Mtf for all points in the state space. Our solution is to simply delete the offending points from the state space. (Alternatively, we could make a special definition of the Mtf at the offending points, but this leads to a Markov chain that lacks the Feller property (Meyn and Tweedie, 2009, p.124), and this prevents us from employing Meyn and Tweedie’s (2009) Lemma 15.2.8.) Thus, we define the state space of our Markov chain to be

Taking the state space to be X instead of Rp+q×Rm+1+ has no effect on posterior inference because the difference between these two sets is a set of measure zero. However, as will become clear in Section 3, the deleted points do create some complications in the drift analaysis. We note that this particular technical issue has surfaced before (see, e.g., Román and Hobert, 2012), although, in contrast with the current situation, the culprit is typically improper priors.

where Kζ(⋅) denotes the modified Bessel function of the second kind.

Fix r∈(0,1), and let A denote a measurable set in X. The Mtf of the Markov chain that drives our hybrid algorithm is given by

where we (henceforth) omit the dependence on y from the conditional densities for notational convenience. The Appendix contains a proof that the Markov chain defined by P is a Feller chain. In the next section, we prove Proposition 1.

This section contains a proof of Proposition 1. In particular, we establish a geometric drift condition for our Markov chain, {(θk,λk)}∞k=0, using a drift function, v:X→[0,∞), that is unbounded off compact sets. Since our chain is Feller, geometric ergodicity then follows immediately from Meyn and Tweedie’s (2009) Theorem 6.0.1 and Lemma 15.2.8.

Recall that in our model, τiiid∼Gamma(c,d). The hyperparameter c will play a crucial role in our drift function. Define ν:R+→(0,1/2] as

where α1,α2,α3,α4∈R+ and δ,η∈Rm+. The values of these constants are to be determined. The Appendix contains a proof that v(θ,λ) is unbounded off compact sets.

Our goal is to demonstrate that

for some ρ∈[0,1) and some finite constant L. First, note that

In order to bound (12), we need to develop bounds for E[E[h(~θ)∣∣τ,λ]∣∣θ,λ] and E[E[g(~λ)∣∣τ,θ]∣∣θ,λ]. These will be handled separately in the next two subsections.

We will bound (14) using the following lemmas, which are proven in the Appendix.

is the largest singular value of

X and c∗ is a finite positive constant.

and smax is the largest singular value of X.

Also, from Jensen’s inequality and (16),

Conditions (2) and (3) of Proposition 1 imply that all of the above Gamma functions have positive arguments.