Adaptive sparse coding methods learn a possibly overcomplete set of basis functions, such that natural image patches can be reconstructed by linearly combining a small subset of these bases. The applicability of these methods to visual object recognition tasks has been limited because of the prohibitive cost of the optimization algorithms required to compute the sparse representation. In this work we propose a simple and efficient algorithm to learn basis functions. After training, this model also provides a fast and smooth approximator to the optimal representation, achieving even better accuracy than exact sparse coding algorithms on visual object recognition tasks. 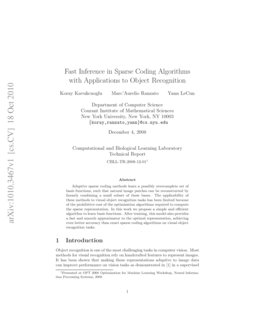 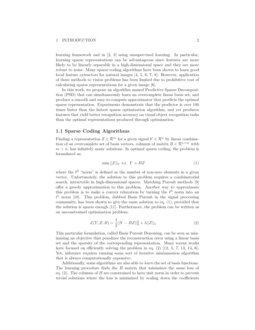 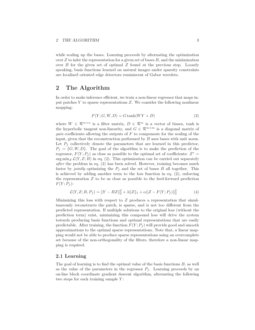 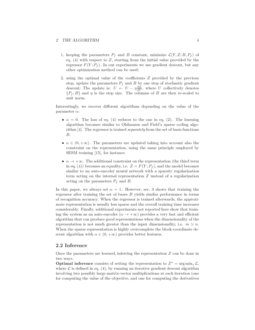 Object recognition is one of the most challenging tasks in computer vision. Most methods for visual recognition rely on handcrafted features to represent images. It has been shown that making these representations adaptive to image data can improve performance on vision tasks as demonstrated in

in a supervised learning framework and in

using unsupervised learning. In particular, learning sparse representations can be advantageous since features are more likely to be linearly separable in a high-dimensional space and they are more robust to noise. Many sparse coding algorithms have been shown to learn good local feature extractors for natural images

[4, 5, 6, 7, 8]. However, application of these methods to vision problems has been limited due to prohibitive cost of calculating sparse representations for a given image [6].

In this work, we propose an algorithm named Predictive Sparse Decomposition (PSD) that can simultaneously learn an overcomplete linear basis set, and produce a smooth and easy-to-compute approximator that predicts the optimal sparse representation. Experiments demonstrate that the predictor is over 100 times faster than the fastest sparse optimization algorithm, and yet produces features that yield better recognition accuracy on visual object recognition tasks than the optimal representations produced through optimization.

by linear combination of an overcomplete set of basis vectors, columns of matrix

B∈Rn×m with m>n, has infinitely many solutions. In optimal sparse coding, the problem is formulated as:

where the ℓ0 “norm” is defined as the number of non-zero elements in a given vector. Unfortunately, the solution to this problem requires a combinatorial search, intractable in high-dimensional spaces. Matching Pursuit methods [9] offer a greedy approximation to this problem. Another way to approximate this problem is to make a convex relaxation by turning the ℓ0 norm into an ℓ1 norm [10]. This problem, dubbed Basis Pursuit in the signal processing community, has been shown to give the same solution to eq. (1), provided that the solution is sparse enough [11]. Furthermore, the problem can be written as an unconstrained optimization problem:

This particular formulation, called Basis Pursuit Denoising, can be seen as minimizing an objective that penalizes the reconstruction error using a linear basis set and the sparsity of the corresponding representation. Many recent works have focused on efficiently solving the problem in eq. (2) [12, 5, 7, 13, 14, 6]. Yet, inference requires running some sort of iterative minimization algorithm that is always computationally expensive.

Additionally, some algorithms are also able to learn the set of basis functions. The learning procedure finds the B matrix that minimizes the same loss of eq. (2). The columns of B are constrained to have unit norm in order to prevent trivial solutions where the loss is minimized by scaling down the coefficients while scaling up the bases. Learning proceeds by alternating the optimization over Z to infer the representation for a given set of bases B, and the minimization over B for the given set of optimal Z found at the previous step. Loosely speaking, basis functions learned on natural images under sparsity constraints are localized oriented edge detectors reminiscent of Gabor wavelets.

In order to make inference efficient, we train a non-linear regressor that maps input patches Y to sparse representations Z. We consider the following nonlinear mapping:

where W∈Rm×n is a filter matrix, D∈Rm is a vector of biases, tanh is the hyperbolic tangent non-linearity, and G∈Rm×m is a diagonal matrix of gain coefficients allowing the outputs of F to compensate for the scaling of the input, given that the reconstruction performed by B uses bases with unit norm. Let Pf collectively denote the parameters that are learned in this predictor, Pf={G,W,D}. The goal of the algorithm is to make the prediction of the regressor, F(Y;Pf) as close as possible to the optimal set of coefficients: Z∗=argminZL(Y,Z;B) in eq. (2). This optimization can be carried out separately after the problem in eq. (2) has been solved. However, training becomes much faster by jointly optimizing the Pf and the set of bases B

all together. This is achieved by adding another term to the loss function in eq. (

2), enforcing the representation Z to be as close as possible to the feed-forward prediction F(Y;Pf):

Minimizing this loss with respect to Z produces a representation that simultaneously reconstructs the patch, is sparse, and is not too different from the predicted representation. If multiple solutions to the original loss (without the prediction term) exist, minimizing this compound loss will drive the system towards producing basis functions and optimal representations that are easily predictable. After training, the function F(Y;Pf) will provide good and smooth approximations to the optimal sparse representations. Note that, a linear mapping would not be able to produce sparse representations using an overcomplete set because of the non-orthogonality of the filters, therefore a non-linear mapping is required.

The goal of learning is to find the optimal value of the basis functions B, as well as the value of the parameters in the regressor Pf. Learning proceeds by an on-line block coordinate gradient descent algorithm, alternating the following two steps for each training sample Y:

Interestingly, we recover different algorithms depending on the value of the parameter α:

Once the parameters are learned, inferring the representation Z can be done in two ways. Optimal inference consists of setting the representation to Z∗=argminzL, where L is defined in eq. (4), by running an iterative gradient descent algorithm involving two possibly large matrix-vector multiplications at each iteration (one for computing the value of the objective, and one for computing the derivatives through B). Approximate inference, on the other hand sets the representation to the value produced by F(Y;Pf) as given in eq. (3), involving only a forward propagation through the regressor, i.e. a single matrix-vector multiplication.

[16], and Sparse Encoding Symmetric Machine (SESM) [15]. Then, we compare the recognition accuracy and inference time of PSD feed-forward approximation to feature sign algorithm [7], on the Caltech 101 dataset [17]. Finally we investigate the stability of representations under naturally changing inputs.

3.1 3.1 Comparison against PCA, RBM and SESM on the MNIST

The MNIST dataset has a training set with 60,000 handwritten digits of size 28x28 pixels, and a test set with 10,000 digits. Each image is preprocessed by normalizing the pixel values so that their standard deviation is equal to 1. In this experiment the sparse representation has 256 units. This internal representation is used as a global feature vector and fed to a linear regularized logistic regression classifier. Fig.

1 shows the comparison between PSD (using feed-forward approximate codes) and, PCA, SESM [15], and RBM [18]. Even though PSD provides the worst reconstruction error, it can achieve the best recognition accuracy on the test set under different number of training samples per class.

(FS), we measure the average signal to noise ratio

111SNR=10log10(σ2signal/σ2noise) (SNR) over a test dataset of 20,000 natural image patches of size 9x9. The data set of images was constructed by randomly picking 9x9 patches from the images of the Berkeley dataset converted to gray-scale values, and these patches were normalized to have zero mean and unit standard deviation. The algorithms were trained to learn sparse codes with 64 units222

Principal Component Analysis shows that the effective dimensionality of 9x9 natural image patches is about 47 since the first 47 principal components capture the 95% of the variance in the data. Hence, a 64-dimensional feature vector is actually an overcomplete representation for these 9x9 image patches.

Despite the lack of absolute precision in predicting the exact optimal sparse codes, PSD predictor achieves even better performance in recognition. The Caltech 101 dataset is pre-processed in the following way: 1) each image is converted to gray-scale, 2) it is down-sampled so that the longest side is 151 pixels, 3) the mean is subtracted and each pixel is divided by the image standard deviation, 4) the image is locally normalized by subtracting the weighted local mean from each pixel and dividing it by the weighted norm if this is larger than 1 with weights forming a 9x9 Gaussian window centered on each pixel, and 5)

the image is 0-padded to 143x143 pixels. 64 feature detectors (either produced by FS or PSD predictor) were plugged into an image classification system that

A) used the sparse coding algorithms convolutionally to produce 64 feature maps of size 128x128 for each pre-processed image, B) applied an absolute value rectification, C) computed an average down-sampling to a spatial resolution of 30x30 and D) used a linear SVM classifier to recognize the object in the image (see fig. 2(b)). Using this system with 30 training images per class we can achieve 53% accuracy on Caltech 101 dataset.

Since FS finds exact sparse codes, its representations are generally sparser than those found by PSD predictor trained with the same value of sparsity penalty λ. Hence, we compare the recognition accuracy against the measured sparsity level of the representation as shown in fig. 3(b). PSD is not only able to achieve better accuracy than exact sparse coding algorithms, but also, it does it much more efficiently. Fig. 3(a) demonstrates that our feed-forward predictor extracts features more than 100 times faster than feature sign. In fact, the speed up is over 800 when the sparsity is set to the value that gives the highest accuracy shown in fig. 3(b).

Finally, we observe that these sparse coding algorithms are somewhat inefficient when applied convolutionally. Many feature detectors are the translated versions of each other as shown in fig. 2(a). Hence, the resulting feature maps are highly redundant. This might explain why the recognition accuracy tends to saturate when the number of filters is increased as shown in fig. 3(c).

In order to quantify the stability of PSD and FS, we investigate their behavior under naturally changing input signals. For this purpose, we train a basis set with 128 elements, each of size 9x9, using the PSD algorithm on the Berkeley [20]

dataset. This basis set is then used with FS on the standard “foreman” test video together with the PSD Predictor. We extract 784 uniformly distributed patches from each frame with a total of 400 frames.

Sparse coding algorithms can be used as pre-processor in many vision applications and, in particular, to extract features in object recognition systems. To the best of our knowledge, no sparse coding algorithm is computationally efficient because inference involves some sort of iterative optimization. We showed that sparse codes can actually be approximated by a feed-forward regressor without compromising the recognition accuracy, but making the recognition process very fast and suitable for use in real-time systems. We proposed a very simple algorithm to train such a regressor.

In the future, we plan to train the model convolutionally in order to make the sparse representation more efficient, and to build hierarchical deep models by sequentially replicating the model on the representation produced by the previous stage as successfully proposed in [18].