We introduce PyTorch Geometric, a library for deep learning on irregularly structured input data such as graphs, point clouds and manifolds, built upon PyTorch. In addition to general graph data structures and processing methods, it contains a variety of recently published methods from the domains of relational learning and 3D data processing. PyTorch Geometric achieves high data throughput by leveraging sparse GPU acceleration, by providing dedicated CUDA kernels and by introducing efficient mini-batch handling for input examples of different size. In this work, we present the library in detail and perform a comprehensive comparative study of the implemented methods in homogeneous evaluation scenarios. 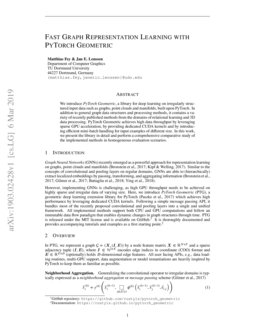 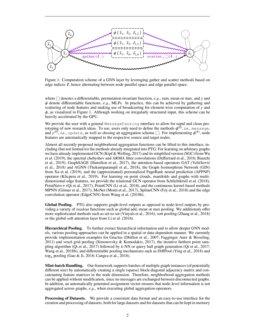 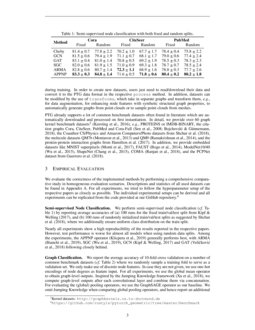 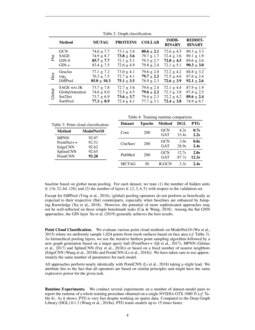 However, implementing GNNs is challenging, as high GPU throughput needs to be achieved on highly sparse and irregular data of varying size. Here, we introduce PyTorch Geometric (PyG), a geometric deep learning extension library for PyTorch (Paszke et al., 2017) which achieves high performance by leveraging dedicated CUDA kernels. Following a simple message passing API, it bundles most of the recently proposed convolutional and pooling layers into a single and unified framework. All implemented methods support both CPU and GPU computations and follow an immutable data flow paradigm that enables dynamic changes in graph structures through time. PyG is released under the MIT license and is available on GitHub.111GitHub repository: https://github.com/rusty1s/pytorch_geometric It is thoroughly documented and provides accompanying tutorials and examples as a first starting point.222Documentation: https://rusty1s.github.io/pytorch_geometric

In practice, this can be achieved by gathering and scattering of node features and making use of broadcasting for element-wise computation of γ and ϕ, as visualized in Figure 1. Although working on irregularly structured input, this scheme can be heavily accelerated by the GPU.

We provide the user with a general MessagePassing interface to allow for rapid and clean prototyping of new research ideas. To use, users only need to define the methods ϕ(k), i.e., message, and γ(k), i.e., update, as well as chosing an aggregation scheme \dottedsquare. For implementing ϕ(k), node features are automatically mapped to the respective source and target nodes.

functions such as global add, mean or max pooling. We additionaly offer more sophisticated methods such as set-to-set

Our framework supports batches of multiple graph instances (of potentially different size) by automatically creating a single (sparse) block-diagonal adjacency matrix and concatenating feature matrices in the node dimension. Therefore, neighborhood aggregation methods can be applied without modification, since no messages are exchanged between disconnected graphs. In addition, an automatically generated assignment vector ensures that node-level information is not aggregated across graphs,

We provide a consistent data format and an easy-to-use interface for the creation and processing of datasets, both for large datasets and for datasets that can be kept in memory during training. In order to create new datasets, users just need to read/download their data and convert it to the PyG data format in the respective process method. In addition, datasets can be modified by the use of transforms, which take in separate graphs and transform them, e.g., for data augmentation, for enhancing node features with synthetic structural graph properties, to automatically generate graphs from point clouds or to sample point clouds from meshes.

We evaluate the correctness of the implemented methods by performing a comprehensive comparative study in homogeneous evaluation scenarios. Descriptions and statistics of all used datasets can be found in Appendix A

. For all experiments, we tried to follow the hyperparameter setup of the respective papers as closely as possible. The individual experimental setups can be derived and all experiments can be replicated from the code provided at our GitHub repository.

We perform semi-supervised node classification (cf. Table 1) by reporting average accuracies of (a) 100 runs for the fixed train/val/test split from Kipf & Welling (2017), and (b) 100 runs of randomly initialized train/val/test splits as suggested by Shchur et al. (2018), where we additionally ensure uniform class distribution on the train split.

We report the average accuracy of 10-fold cross validation on a number of common benchmark datasets (cf. Table 2

) where we randomly sample a training fold to serve as a validation set. We only make use of discrete node features. In case they are not given, we use one-hot encodings of node degrees as feature input. For all experiments, we use the global mean operator to obtain graph-level outputs. Inspired by the Jumping Knowledge framework

(Xu et al., 2018), we compute graph-level outputs after each convolutional layer and combine them via concatenation. For evaluating the (global) pooling operators, we use the GraphSAGE operator as our baseline. We omit Jumping Knowledge when comparing global pooling operators, and hence report an additional baseline based on global mean pooling. For each dataset, we tune (1) the number of hidden units ∈{16,32,64,128} and (2) the number of layers ∈{2,3,4,5} with respect to the validation set.

Except for DiffPool (Ying et al., 2018), (global) pooling operators do not perform as benefically as expected to their respective (flat) counterparts, especially when baselines are enhanced by Jumping Knowledge (Xu et al., 2018). However, the potential of more sophisticated approaches may not be well-reflected on these simple benchmark tasks (Cai & Wang, 2018). Among the flat GNN approaches, the GIN layer (Xu et al., 2019) generally achieves the best results.

We evaluate various point cloud methods on ModelNet10 (Wu et al., 2015) where we uniformly sample 1,024 points from mesh surfaces based on face area (cf. Table 4). As hierarchical pooling layers, we use the iterative farthest point sampling algorithm followed by a new graph generation based on a larger query ball (PointNet++ (Qi et al., 2017), MPNN (Gilmer et al., 2017) and SplineCNN (Fey et al., 2018)) or based on a fixed number of nearest neighbors (EdgeCNN (Wang et al., 2018b) and PointCNN (Li et al., 2018)). We have taken care to use approximately the same number of parameters for each model.

All approaches perform nearly identically with PointCNN (Li et al., 2018) taking a slight lead. We attribute this to the fact that all operators are based on similar principles and might have the same expressive power for the given task.

We conduct several experiments on a number of dataset-model pairs to report the runtime of a whole training procedure obtained on a single NVIDIA GTX 1080 Ti (cf. Table 4). As it shows, PyG is very fast despite working on sparse data. Compared to the Deep Graph Library (DGL) 0.1.3 (Wang et al., 2018a), PyG trains models up to 15 times faster.

We presented the PyTorch Geometric framework for fast representation learning on graphs, point clouds and manifolds. We are actively working to further integrate existing methods and plan to quickly integrate future methods into our framework. All researchers and software engineers are invited to collaborate with us in extending its scope.

This work has been supported by the German Research Association (DFG) within the Collaborative Research Center SFB 876, Providing Information by Resource-Constrained Analysis, projects A6 and B2. We thank Moritz Ludolph for his contribution to PyTorch Geometric and Christopher Morris for proofreading and helpful advice.

We give detailed descriptions and statistics (cf. Table 5) of the datasets used in our experiments:

MUTAG is a dataset consisting of mutagenetic aromatic and heteroaromatic nitro compounds. PROTEINS holds a set of proteins represented by graphs. Nodes represent secondary structure elements (SSEs) which are connected whenever there are neighbors either in the amino acid sequence or in 3D space.

ModelNet10 is an orientation-aligned dataset of CAD models. Each model corresponds to exactly one out of 10 object categories. Categories were chosen based on a list of the most common object categories in the world.