Hadamard time-encoded pseudo-continuous arterial spin labeling (te-pCASL) is a signal-to-noise ratio (SNR)-efficient MRI technique for acquiring dynamic pCASL signals that encodes the temporal information into the labeling according to a Hadamard matrix. In the decoding step, the contribution of each sub-bolus can be isolated resulting in dynamic perfusion scans. When acquiring te-ASL both with and without flow-crushing, the ASL-signal in the arteries can be isolated resulting in 4D-angiographic information. However, obtaining multi-timepoint perfusion and angiographic data requires two acquisitions. In this study, we propose a 3D Dense-Unet convolutional neural network with a multi-level loss function for reconstructing multi-timepoint perfusion and angiographic information from an interleaved 50 50 present a framework to generate dynamic pCASL training and validation data, based on models of the intravascular and extravascular te-pCASL signals. The proposed network achieved SSIM values of 92.89 ± 1.18 and 96.50 ± 0.70 respectively for 4D perfusion and angiographic data reconstruction for 313 test data-sets. 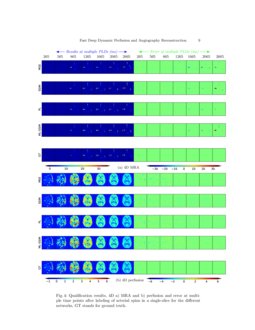 Arterial spin labeling (ASL) is a non-invasive MRI technique which uses magnetically labeled blood water as an endogenous tracer for assessing cerebral blood flow (CBF) [5]. Hadamard time-encoded(te)-ASL is a time-efficient approach which provides the possibility to combine the superior SNR of ASL to acquire data at different inflow times to obtain dynamic ASL-data [15]. When Hadamard te-ASL is done with and without flow-crushing, 4D magnetic resonance angiography (MRA) and arterial input function (AIF) measurements can be obtained next to the perfusion scans. While this approach improves quantification and enhances information content, it is a factor two slower, since both crushed and non-crushed data need to be acquired. Accelerating te-ASL quantification can be done either by acquiring sub-sampled data in k-space or by reducing the rank of the Hadamard matrix. However, these methods can end up reducing image quality and/or signal-to-noise (SNR) ratio.

In this work, we propose an end-to-end 3D convolutional neural network (CNN) for the reconstruction of multi-timepoint 4D MRA and perfusion scans by using half-sampled crushed as well as half-sampled non-crushed Hadamard te-ASL scans, to maintain image quality and provide accurate CBF quantification. Recently, CNNs have shown outstanding performance in medical imaging [16, 4, 7]. However, very few CNN reconstruction techniques have been proposed in the context of MRA and perfusion reconstruction. In [6] a U-net shape CNN for boosting SNR and resolution of ASL scans has been proposed. Guo et al. proposed a CNN based method for improving 3D perfusion image quality by the combined use of single- and multi-delay pseudo-continuous arterial spin labeling (PCASL) and an anatomical scan [8]. In Guo’s study, ground truth perfusion maps were obtained by positron emission tomography scans. In [10]

In this work, different from the previous works, we employ CNNs in order to accelerate the simultaneous acquisition of 4D MRA and perfusion measurements. One of the challenging issues is the different properties of the outputs of the proposed CNN since MRA is intrinsically sparse and has much more elongated structures than the smooth perfusion map. We tackle this issue by employing different weighting of the loss functions of these two output-types and by balancing extracted samples during training. The proposed CNN leverages the idea of dense blocks [11], arranging them in a typical U-shape [12]. Loop connectivity patterns in dense blocks improve the flow of gradients throughout the network and strengthen feature propagation and feature re-usability [16]. In this investigation, we compare the performance of several loss functions: mean square error (MSE), VGG-16 perceptual loss, structural similarity index (SSIM) and multi-level SSIM (ML-SSIM). The main contributions of our work are:

Fig. 1 illustrates the proposed network, which takes 50% sub-sampled crushed and 50% sub-sampled non-crushed interleaved ASL data as input and outputs dynamic MRA and perfusion scans. For managing GPU memory, the network was implemented patch-based. The input patches (of size 533) are extracted from 50% sub-sampled Hadamard te-crushed and te-non-crushed scans. The outputs of the network are 14 patches of size 393 containing perfusion and angiography patches, each at seven different time-points. In this study, we considered a Hadamard matrix of rank 8, so the inputs are 8 patches in total (4 crushed, 4 non-crushed). In each dense block two (3×3×3

1×1×1)conv-BN-leaky ReLu, as a bottleneck layer, are stacked. Loop connectivity patterns in dense blocks are employed to improve the flow of gradients [11]. The bottleneck layers are used to increase the number of feature maps in a tractable fashion, which make the training process easier while leading to a more compact model. A down-sampling unit is followed by one 2×2×2max-pooling layer with a stride of 2×2×2. In order to solve the well-known checkerboard issue of the conv-transpose layer, for the up-sampling layer the feature maps are re-sized by a constant trilinear resize convolution kernel, similar to [3]. In this work we investigate the impact of several loss functions for the defined problem: MSE, which is the L2-norm, VGG-16 perceptual loss [13], SSIM which is composed of luminance, contrast and structural error, and ML-SSIM, which is calculated based on weighting the SSIM loss function for different levels of the network, see Fig. 1.

In pCASL the arterial spins are magnetically labeled with a radiofrequency inversion pulse applied below the imaging slices in the neck vessels. The labeled blood then travels via the arteries towards the brain tissue, where they pass from the capillary compartment into the extravascular compartment. After a certain delay time after labeling which is known as the post-labeling delay (PLD) a so-called labeled image is acquired. A control image is acquired without prior labeling and by subtraction of these two images, the perfusion image can be generated. For the Hadamard te-pCASL technique, the labeling module (the typical duration of 3-4 seconds) is divided into several blocks (sub-boli) and a Hadamard matrix is used to determine whether a block will be played-out in label or control condition. For each voxel the Hadamard te-pCASL signal can contain both perfusion signal as well as label still residing in the arteries, i.e. angiography signals.

Since it is difficult to acquire substantial amounts of real data, we propose to model the input data, allowing to generate a sufficient amount of training data. The ground truth output data is created by decoding fully sampled Hadamard te-ASL crushed and non-crushed data [15]. For this purpose, we create datasets based upon a tracer kinetic model for the Hadamard time-encoded pCASL signal that describes the signal a function of arterial arrival time (AAT), bolus arrival time (BAT) and CBF. In this study, for calculating the signal, the AAT and BAT information are obtained from in vivo data. The CBF maps are taken from the BrainWeb dataset by assigning CBF-values to white matter (WM), gray matter (GM) and cerebrospinal fluid (CSF).

Fig. 2 shows the proposed framework for synthetically generating training and validation datasets. For this goal, we leverage the well-known Buxton kinetic model [1], which has been defined for normal ASL, and defined a tracer delivery function (for tissue voxels and arteries) and a tracer accumulation (perfusion) function for each bolus of Hadamard encoded labeling scheme. The final kinetic model is then generated by performing the convolution of the AIF and the residue function. Equations (1) and (2) define the obtained model for large arteries and tissue signals for a Hadamard scheme of 8 encoding steps respectively. These equations can be generalized for Hadamard matrices of higher rank.

in which τb is label duration for the bth sub-bolus, N is the number of sub-boluses, M0a is the magnetization of arterial blood, Δta is AAT which represents the arrival time of the labeled blood in the artery, Δtb is BAT which represents the arrival time of labeled blood in the tissue, T1a is the arterial blood relaxation time, f is CBF (millimeter per gram per second), κ is static tissue signal, aCBV is arterial cerebral blood volume,

Lr(b) is 0 if the bth bolus in the rth row is control, and it is 1 if the bth bolus in the rth row is label. For voxels containing large arteries, the pCASL signal can be computed by Svoxel=Stissue+Sartery. The calculated tracer kinetic model is a function of AAT, BAT and CBF. In this study, the anatomic structures are obtained from the BrainWeb database [2]. In order to obtain the tracer signal, the AAT and BAT and blood maps are extracted from in vivo data, then registered with a subject from the BrainWeb dataset by Elastix [14]. The ground truth, i.e. 4D MRA and perfusion scans, are obtained by normal Hadamard decoding of the pCASL images [9]. To evaluate the generated data, the signal evolution pattern was validated by the Buxton curve model [1].

In this study, the dataset was generated for a Hadamard-8 matrix with seven blocks of respectively 1300, 600, 400, 400, 400, 300 and 300 ms with an additional 265 ms delay before the start of readout. Using the permuted in vivo information (include 6 BAT, 4 AAT) and registering those with the anatomical information from the BrainWeb dataset (consisting of 20 normal subjects and CBF) and calculating the Hadamard te-pCASL (equations (1) and (2)), this study contains 1564 distinct simulated data-sets each including crushed and non-crushed input data for 8 Hadamard-encodings. By decoding each of the generated crushed and non-crushed te-pCASL data, the corresponding angiographic and perfusion output data at 7-time points, as the ground truth, are obtained. The scans were divided into 1096 subjects for training, 155 for validation and 313 for testing.

We implemented the proposed networks in Google’s Tensorflow. The patch extraction was done parallel and randomly using a multi-threaded daemon process on the CPU and then patches were fed to the network on the GPU during the training process. To tackle the sparsity of MRA with respect to the perfusion scans, 75 percent of the patches were extracted from the region containing arteries. The input patches were augmented by white noise extracted from a Gaussian distribution with zero mean and random standard deviation between 0 and 5, left-to-right flipping, and random rotation (up to

Evaluation of the proposed networks has been performed by calculating SSIM, MSE, signal to noise ratio, and peak signal to noise ratio (pSNR), comparing the ground truth reconstruction using full sampling with that of the neural network using 50% subsampling. Table 1 tabulates a quantitative comparison between the mentioned loss functions. Fig. 3 depicts the boxplots of the metrics on the test set. The network with SSIM loss function with a value of 93.00±0.03 has the highest value for SSIM metric, and the network with ML-SSIM loss function with 96.50±0.70 has the second rank for perfusion reconstruction. While the network with ML-SSIM loss function with the values of 0.20±0.12, 1.48±0.53 and 32.52±3.08 for MSE, SNR and pSNR respectively, has a better performance than its competitors. Also, this network with the values of 96.50±0.70, 3.09±2.22 and 0.35±.56 for respectively SSIM, MSE and SNR, exceeded the other mentioned networks for angiography reconstruction. Fig. 4 exemplifies the qualification compassion for 4D MRA and perfusion reconstruction between the different CNNs. It takes an average of 205±232 ms from the ML-SSIM network to reconstruct all perfusion and angiography scans from the interleaved sparsely-sampled crushed and non-crushed data of size 1073.

We proposed a 3D end-to-end fully convolutional CNN for accelerating 4D MRA and perfusion reconstruction from half-sampled crushed and non-crushed pCASL data. We leveraged loop connectivity patterns in the network architecture to improve the flow of information during the gradient updates. For training and validation purposes we developed a data generator framework based on the generalized kinetic model for the pCASL signal. The generated dataset included 1096 scans for training, 155 scans for validation and 313 for testing. The proposed network with ML-SSIM loss function achieved a SSIM of 92.9±1.8/96.5±0.7, MSE of 0.20±0.12/3.09±2.22, SNR of 1.48±0.53/0.35±0.56, and pSNR of 32.52±21.07/6.33±7.15 for perfusion/angiography reconstruction.

In conclusion, the proposed network obtained promising results for the challenging problem of 4D MRA and perfusion reconstruction. The method, therefore, may assist an accelerated MRI scanning workflow. A further step of this study is enriching the training and validation datasets with in vivo data.

Acknowledgements. This work is financed by the Netherlands Organization for Scientific Research (NWO), VICI project 016.160.351.