We present a fast Compressive Sensing algorithm for the reconstruction of binary signals 0,1-valued binary signals from its linear measurements. The proposed algorithm minimizes a non-convex penalty function that is given by a weighted sum of smoothed ℓ_0 norms under the [0,1] box-constraint. It is experimentally shown that the proposed algorithm is not only significantly faster than linear-programming-based convex optimization algorithms, but also shows a better recovery performance under several different metrics. 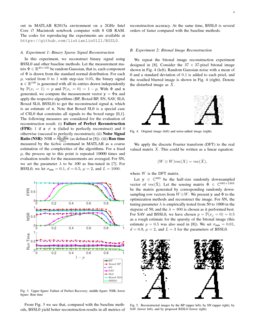 Compressive Sensing (CS) is a method in signal processing which aims to reconstruct signals from a relatively small number of measurements. It has been shown that sparse signals can be reconstructed with a sampling rate far less than the Nyquist rate by exploiting the sparsity [1].

In this paper, we focus on Binary Compressive Sensing (BCS) which restricts the signals of interest to binary {0,1}-valued signals, which are widely used in engineering applications, such as fault detection [2], single-pixel image reconstruction [3], and digital communications [4]. Related works are as follows: Nakarmi and Rahnavard [5] designed a sensing matrix tailored for binary signal reconstruction. Wang et al. [6] combined ℓ1 norm with ℓ∞ norm to reconstruct sparse binary signals. Nagahara [7] exploited the sum of weighted ℓ1 norms to effectively reconstruct signals whose entries are integer-valued and, in particular, binary signals and bitonal images. Keiper et al. [8]

We note that most of the previous work on BCS are based on convex optimization. Indeed, convex optimization based algorithms allow performance guarantee via rich mathematical tools. However, they are found to be notoriously slow in large-scale applications compared to greedy methods such as the Orthogonal Matching Pursuit (OMP) [9]. On the other hand, greedy methods like OMP are fast but often have a worse recovery rate than convex optimization methods. In this work, we propose a fast BCS algorithm with a high recovery rate. Taking the binariness of signals into account, our algorithm is a gradient descent method based on the smoothed ℓ0 norm [10]. Through numerical experiments, we show that the proposed algorithm compares favorably against previously proposed CS and BCS algorithms in terms of recovery rate and speed.

The rest of the paper is organized as follows. We give a short review on CS/BCS algorithms in Section II and present our algorithm in Section III. In Section IV, we present experimental results which compare the performance of the proposed algorithm with other algorithms. We conclude this paper with some remarks in Section V.

. The probability of an event

In the standard CS scheme, one aims to recover a sparse signal from its linear measurements. The constraints posed by the measurements can be formulated as

The BCS scheme considers binary signals for x. Note that a binary signal x is sparse if and only if its complementary binary signal ˜x:=1N−x is dense, i.e., is almost fully supported. As the measurement matrix Φ is known, the equation (1) converts equivalently to

is a random vector whose entries are independent and identically distributed (i.i.d.) with probability distribution

Below we give a short review of CS/BCS methods that are related to our work.

A naive approach to finding sparse solutions is the ℓ0 minimization,

This method works generally for continuous-valued signals that are sparse, i.e., signals whose entries are mostly zero. However, solving the ℓ0 minimization requires a combinatorial search and is therefore NP-hard [12].

This is motivated by the observation

Noticing that z↦∑Ni=1(1−exp(−z2i2σ2)) is a smooth function for any fixed σ>0, Mohimani et al. [10] proposed an algorithm based on the gradient descent method. The algorithm iteratively obtains an approximate solution by decreasing σ.

A well-known and by now standard relaxation of (P0) is the ℓ1-minimization, also known as the Basis Pursuit (BP) [14]:

Similar to (P0), this method works generally for continuous-valued signals x∈RN that are sparse.

The intuition behind Boxed BP is straightforward: the ℓ1 norm minimization promotes sparsity of the solution while the restriction z∈[0,1]N reduces the set of feasible solutions. Recently, Keiper et al. [8] analyzed the performance of Boxed BP for reconstructing binary signals.

Minimizing ∥z∥1 promotes sparsity of z while minimizing ∥z−121N∥∞ forces the entries |zi−12| to be small and of equal magnitude (see Fig. 1). The two terms are balanced by a tuning parameter λ>0.

Nagahara [7] proposed the following method for reconstruction of discrete signals whose entries are chosen independently from a set of finite alphabets α={α1,α2,…,αL} with a priori known probability distribution. In the special case α={0,1} of binary signals, SAV is formulated as,

where p=P(xj=1), j∈[N], is the probability distribution of the entries of x. If p≈0, i.e., if x is sparse, then so that SAV performs similar to BP. We note that

L0 and SL0 utilize the ℓ0 norm and its smoothed version respectively, however, they do not take into account that x is binary. On the other hand, Boxed BP, SN, and SAV utilize the ℓ1 norm in one way or another and are specifically adjusted to the binary setting. A natural question arises: Can we achieve a better recovery rate for binary signals by adjusting L0 and SL0 to the binary setting?

We note that Boxed BP takes into account the binariness of x by imposing the restriction x∈[0,1]N. It is straightforward to apply this trick to L0 and SL0, and we will call the resulting algorithms Boxed L0 and Boxed SL0 respectively. Boxed L0 is still NP-hard like L0, but Boxed SL0 shows a clear improvement over SL0 while requiring a similar amount of run time (Fig. 3). However, the recovery rate of Boxed SL0 is significantly worse than Boxed BP or SN.

In this paper, we aim to adapt the SAV method and the restriction x∈[0,1]N to SL0, in order to achieve a better performance. A straightforward adaptation leads to the following formulation. For σ>0 small,

Next, we will use a weight function to incorporate the restriction z∈[0,1]N into the function Fσ(z). For integers k≥1, let

To solve this problem, we propose an algorithm which is based on the gradient descent method and is implemented similarly as algorithms in [10, 13]. A major difference in our algorithm is that the cost function ∑Ni=1(1−exp(−z2i2σ2)) of SL0 is replaced with Fboxedσ,k(z) which is designed specifically for binary signals by adapting the formulation of SAV [7].

The proposed algorithm is comprised of two nested loops. In the outer loop, we slowly decrease σ and iteratively search for an optimal solution from a coarse to a fine scale by decreasing σ by a factor of 0<d<1. As σ decreases, we also gradually increase k so that a larger penalty is put on solutions that have entries outside the range [0,1]. The inner loop performs a gradient descent of L iterations for the function Fboxedσ,k(z), where σ and k are given from the outer loop. In each iteration of the gradient descent, the solution is projected into the set of feasible solutions {z:Φz=y}.

As already mentioned, our algorithm is implemented similarly as SL0 [10, 13]. The parameters used in our algorithm are exactly the same as in [10] except k and p. As justified in [10, Section IV-B]

, we set the initial estimate of

The gradient of Fboxedσ,k(z) used in Algorithm 1 is given by

This is derived using the fact that w′k(t)=0 for all t except t=0,1; we have set w′k(0)=w′k(1)=0 in the implementation. Let us point out that the discontinuity of wk(t) at t=0,1 does not deteriorate the performance of gradient descent. One can replace the function wk(t) with a smooth function, however, at the cost of increased run time.

In this section, we compare the performance of our algorithm BSSL0 with other CS/BCS algorithms described in Section II. The MATLAB codes for the experiments are available in [15].

In this experiment, we tested BSSL0 with randomly generated binary signals and compared it with other CS/BCS algorithms. Random Gaussian matrices are considered for the measurement matrix Φ∈R40×100, that is, all entries of Φ

are drawn independently from the standard normal distribution. The parameter

p is varied from 0 to 1 by step-size 0.05, and a binary signal x∈{0,1}100 is generated by drawing its entries independently with P(xi=1)=p and P(xi=0)=1−p. For Φ and x, we compute the measurement vector y=Φx and run the respective algorithms introduced in section II (BP, Boxed BP, SN, SAV, SL0, Boxed SL0, and BSSL0) to obtain a solution vector z as a approximated reconstruction of x. Additionally, we consider the Orthogonal Matching Pursuit (OMP) [16] which is a fast greedy algorithm for sparse signal reconstruction. The following are considered for the performance evaluation: (i) Failure of Perfect Reconstruction (FPR): 0 if z=x (successfully recovered the signal perfectly) and 1 if z≠x (failed to recover perfectly); (ii) Noise Signal Ratio (NSR): NSR = ∥x−z∥2∥x∥2; (iii) Run time. For each p, experiments are repeated 10,000 times and the results are averaged. For SN, we set the parameter λ to be 100 as fine-tuned in [6]. For BSSL0, we set σmin=0.1, d=0.5, μ=2, and L=1000.

In Fig. 3, BSSL0 shows a better recovery rate than other CS/BCS algorithms and also shows a run time comparable to SL0.

, we added to each pixel a random Gaussian noise with mean-zero and standard deviation of

and we apply the discrete Fourier transform (DFT) to obtain

In this work, we proposed a fast algorithm (BSSL0) for reconstruction of binary signals which is based on the gradient descent method and smooth relaxation techniques. We showed that for binary signals our algorithm outperforms other CS/BCS methods in terms of the recovery rate and speed. Future work includes a detailed analysis of BSSL0 in stability/robustness and extensions to ternary and finite alphabet signals.

T. Liu and D. G. Lee acknowledge the support of the DFG Grant PF 450/6-1. The authors are grateful to Robert Fischer and Götz E. Pfander for their helpful suggestions. The authors thank anonymous reviewers for their comments.