This paper investigates a type of fast and flexible preconditioners to solve multilinear system 𝒜x^m-1=b with ℳ-tensor 𝒜 and obtains some important convergent theorems about preconditioned Jacobi, Gauss-Seidel and SOR type iterative methods. The main results theoretically prove that the preconditioners can accelerate the convergence of iterations. Numerical examples are presented to reverify the efficiency of the proposed preconditioned methods. 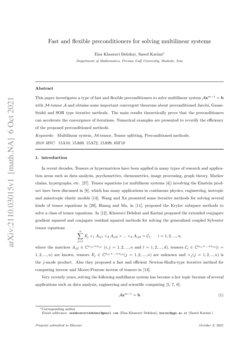 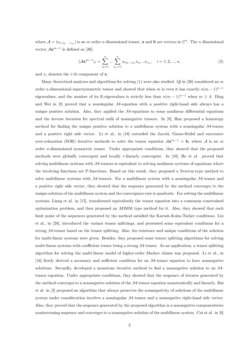 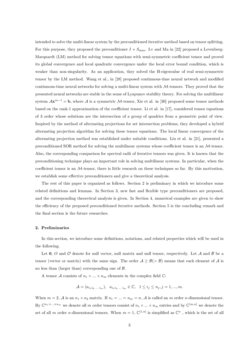 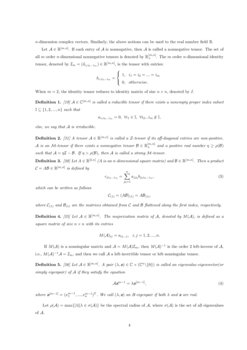 In this paper, we investigate the preconditioned AOR method for solving ...
Yongzhong Song, et al. ∙

In this paper we present iterative methods of high efficiency by the cri...
Luba Sapir, et al. ∙

In recent decades, Tensors or hypermatrices have been applied in many types of research and application areas such as data analysis, psychometrics, chemometrics, image processing, graph theory, Markov chains, hypergraphs, etc.

where the matrices Aijl∈Cnijl×nijl (i,j=1,2,...,n and l=1,2,...,d), tensors Ci∈Cni1×...×nid(i=1,2,...,n) are known, tensors Xj∈Cnj1×...×njd(j=1,2,...,n) are unknown and ×j(j=1,2,..,n) is the j-mode product. Also they proposed a fast and efficient Newton-Shultz-type iterative method for computing inverse and Moore-Penrose inverse of tensors in R78 . Very recently years, solving the following multilinear system has become a hot topic because of several applications such as data analysis, engineering and scientific computing A1 ; A2 ; A3 :

where A=(ai1i2…im) is an m order n-dimensional tensor, x and b

Cn. The n dimensional vector Axm−1 is defined as A4 :

and xi denotes the i-th component of x. Many theoretical analyses and algorithms for solving (1) were also studied. Qi in A4 considered an m order n-dimensional supersymmetric tensor and showed that when m is even it has exactly n(m−1)n−1eigenvalues, and the number of its E-eigenvalues is strictly less than n(m−1)n−1 when m≥4. Ding and Wei in A3 proved that a nonsingular M-equation with a positive right-hand side always has a unique positive solution. Also, they applied the M-equations to some nonlinear differential equations and the inverse iteration for spectral radii of nonnegative tensors. In A6 , Han proposed a homotopy method for ﬁnding the unique positive solution to a multilinear system with a nonsingular M-tensor and a positive right side vector. Li et al., in A10 extended the Jacobi, Gauss‐Seidel and successive over‐relaxation (SOR) iterative methods to solve the tensor equation Axm−1=b, where A is an m order n-dimensional symmetric tensor. Under appropriate conditions, they showed that the proposed methods were globally convergent and locally r‐linearly convergent. In A7 , He et al. proved that solving multilinear systems with M-tensors is equivalent to solving nonlinear systems of equations where the involving functions are P-functions. Based on this result, they proposed a Newton-type method to solve multilinear systems with M-tensors. For a multilinear system with a nonsingular M-tensor and a positive right side vector, they showed that the sequence generated by the method converges to the unique solution of the multilinear system and the convergence rate is quadratic. For solving the multilinear systems, Liang et al. in A11 , transformed equivalently the tensor equation into a consensus constrained optimization problem, and then proposed an ADMM type method for it. Also, they showed that each limit point of the sequences generated by the method satisfied the Karush-Kuhn-Tucker conditions. Liu et al., in A8 , introduced the variant tensor splittings, and presented some equivalent conditions for a strong M-tensor based on the tensor splitting. Also, the existence and unique conditions of the solution for multi-linear systems were given. Besides, they proposed some tensor splitting algorithms for solving multi-linear systems with coefficient tensor being a strong M-tensor. As an application, a tensor splitting algorithm for solving the multi-linear model of higher-order Markov chains was proposed. Li et al., in A9 firstly derived a necessary and sufficient condition for an M-tensor equation to have nonnegative solutions. Secondly, developed a monotone iterative method to find a nonnegative solution to an M-tensor equation. Under appropriate conditions, they showed that the sequence of iterates generated by the method converges to a nonnegative solution of the M-tensor equation monotonically and linearly. Bai et al. in A4.5 proposed an algorithm that always preserves the nonnegativity of solutions of the multilinear system under consideration involves a nonsingular M-tensor and a nonnegative right-hand side vector. Also, they proved that the sequence generated by the proposed algorithm is a nonnegative componentwise nonincreasing sequence and converges to a nonnegative solution of the multilinear system. Cui et al. in A5 intended to solve the multi-linear system by the preconditioned iterative method based on tensor splitting. For this purpose, they proposed the preconditioner I+Smax. Lv and Ma in A12 proposed a Levenberg-Marquardt (LM) method for solving tensor equations with semi-symmetric coefficient tensor and proved its global convergence and local quadratic convergence under the local error bound condition, which is weaker than non-singularity. As an application, they solved the H-eigenvalue of real semi-symmetric tensor by the LM method. Wang et al., in A13

M-tensors. They proved that the presented neural networks are stable in the sense of Lyapunov stability theory. For solving the multilinear system Axm−1=b, where A is a symmetric M-tensor, Xie et al. in A14 proposed some tensor methods based on the rank-1 approximation of the coefﬁcient tensor. Li et al. in A15 , considered tensor equations of 3 order whose solutions are the intersection of a group of quadrics from a geometric point of view. Inspired by the method of alternating projections for set intersection problems, they developed a hybrid alternating projection algorithm for solving these tensor equations. The local linear convergence of the alternating projection method was established under suitable conditions. Liu et al. in A16 , presented a preconditioned SOR method for solving the multilinear systems whose coefficient tensor is an M-tensor. Also, the corresponding comparison for spectral radii of iterative tensors was given. It is known that the preconditioning technique plays an important role in solving multilinear systems. In particular, when the coefficient tensor is an M-tensor, there is little research on these techniques so far. By this motivation, we establish some effective preconditioners and give a theoretical analysis. The rest of this paper is organized as follows. Section 2 is preliminary in which we introduce some related definitions and lemmas. In Section 3, new fast and flexible type preconditioners are proposed, and the corresponding theoretical analysis is given. In Section 4, numerical examples are given to show the efficiency of the proposed preconditioned iterative methods. Section 5 is the concluding remark and the final section is the future researches.

In this section, we introduce some definitions, notations, and related properties which will be used in the following. Let 0, O and O denote for null vector, null matrix and null tensor, respectively. Let A and B be a tensor (vector or matrix) with the same sign. The order A≥B(>B) means that each element of A is no less than (larger than) corresponding one of B. A tensor A consists of n1×...×nm elements in the complex field C:

, the identity tensor reduces to identity matrix of size

A20 A∈C[m,n] is called a reducible tensor if there exists a nonempty proper index subset I⊆{1,2,...,n} such that

else, we say that A is irreducible.

which can be written as follows

where C(1) and B(1) are the matrices obtained from C and B flattened along the first index, respectively.

A18 Let A∈R[m,n]. The majorization matrix of A, denoted by M(A), is defined as a square matrix of size n×n with its entries

If M(A) is a nonsingular matrix and A=M(A)Im, then M(A)−1 is the order 2 left-inverse of A, i.e., M(A)−1A=Im, and then we call A a left-invertible tensor or left-nonsingular tensor.

A if they satisfy the equation

A8 If A is a strong M-tensor, then M(A) is a nonsingular M-matrix.

A22 If A is a Z-tensor, then the following conditions are equivalent

A3 If A is a strong M-tensor, then for every positive vector b, the multilinear system Axm−1=b has a unique positive solution.

A general tensor splitting iterative method for solving (1) is

M(E)−1F is called the iterative tensor of the splitting method (5). Taking A=D−L−F, Liu et al. in A8 , considered E=D, E=D−L and E=1τ(D−τL), the Jacobian, the Gauss-Seidel, and the SOR iterative methods, respectively, where D=DI and L=LI. D, L are the positive diagonal matrix and the strictly lower triangle nonnegative matrix, respectively. Without loss of generality, we always assume that aii...i=1, i=1,2...,n. Consider the splitting of A=I−L−F, where L=LI and L is the strictly lower triangle part of M(A). Using iterative methods for solving (1) may have a poor convergence or even fail to converge. To overcome this problem, it is efficient to apply these methods which combine preconditioning techniques. These iterative methods usually involve some matrices that transform the iterative tensor M(E)−1F into a favorable tensor. The transformation matrices are called preconditioners. Li et al. in A10 , considered the preconditioner Pα=I+Sα for solving preconditioned multilinear system

firstly proposed for M-matrix systems and the authors extended the results for solving tensor case. In A16 , Liu et al. considered a new preconditioned SOR method for solving multilinear systems with preconditioner Pβ=I+Cβ where

Here we consider the preconditioner Pαβ(s,k)=D+Ssα+Kkβ, where 1≤s,k≤n−1, D is the diagonal part of majorization of A (so herein D=I) and Ssα, Kkβ are square matrices which all of their elements are zeros except the sth upper and the kth lower diagonals, i.e.,

Applying Pαβ(s,k) on the left side of Eq. (1), we get a new preconditioned multi-linear system

then the tensor splitting Aαβ(s,k)=E5−F5 is convergent.