We present a multirotor architecture capable of aggressive autonomous flight and collision-free teleoperation in unstructured, GPS-denied environments. The proposed system enables aggressive and safe autonomous flight around clutter by integrating recent advancements in visual-inertial state estimation and teleoperation. Our teleoperation framework maps user inputs onto smooth and dynamically feasible motion primitives. Collision-free trajectories are ensured by querying a locally consistent map that is incrementally constructed from forward-facing depth observations. Our system enables a non-expert operator to safely navigate a multirotor around obstacles at speeds of 10 m/s. We achieve autonomous flights at speeds exceeding 12 m/s and accelerations exceeding 12 m/s^2 in a series of outdoor field experiments that validate our approach. 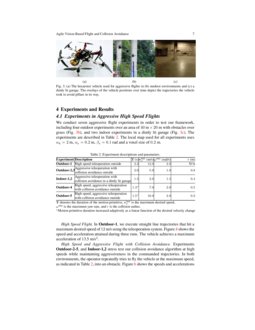 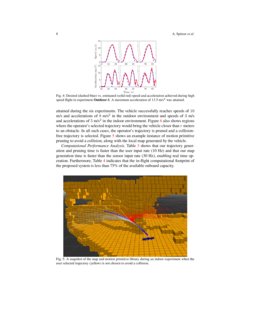 Autonomous aerial vehicles with onboard vision-based sensing and planning have been shown to be capable of performing fast and agile maneuvers. However, long-horizon planning required to achieve a task has proven to be a challenge, particularly with limited onboard compute. We propose a fully integrated vision-based multirotor platform that allows minimally trained operators to teleoperate the vehicle at high speeds with agility, while remaining safe around obstacles in unstructured outdoor environments. At high speeds, the environment around the vehicle changes quickly, and is subject to dynamic obstacles and lighting conditions. Our multirotor architecture integrates the following to achieve agile and collision-free flight in these scenarios: 1) an extension of motion primitive-based teleoperation Yang2018 to generate jerk-continuous local trajectories, a crucial component to prevent instability in agile flights, and 2) efficient local mapping for collision avoidance purposes using a KD-tree.

Many prior works in high speed flight exploit the field-of-view (FOV) of stereo cameras for fast collision checking for autonomous flights, including florence2016; florence2017, where trajectories are constrained to be inside the FOV of the depth sensor with a max range of 10 m. In matthies2014, trajectories generated by RRT∗ are checked for collisions directly in the disparity space. lopez2017 presents aggressive flight on a 1.2 kg MAV, achieving a velocity of 3 m/s. These methods achieve fast collision checking by circumventing the need to construct a local map and checking for collisions in the sensor’s FOV. This however, limits the range of motions the vehicle can perform. Approaches with local map generation using a laser range finder chen2016 and a monocular RGB camera daftry2016 have been shown to achieve maximum velocities of 1.8 m/s and 1.5 m/s respectively, but data processing limits the update rate of the local maps. In our approach, we give a minimally trained operator full control of the vehicle and show that fast and agile flights can be achieved with a human-in-the-loop while maintaining safety.

Aggressive multirotor flights demand large angular velocities and large angular accelerations, which are directly related to the jerk and snap of the reference position mellinger_minimum_2011. Thus to avoid incurring large tracking error due to discontinuous trajectories, we extend forward-arc motion primitives Yang2018 to generate trajectories that retain differentiability up to jerk and continuity up to snap. From the resulting trajectories, we can calculate desired vehicle attitude, angular velocity, and angular acceleration for use as feedforward terms in the controller.

The motion primitives are parameterized as follows. We define a local frame \Lc to be a fixed z-axis aligned frame, taken at a snapshot in time. The motion primitive definition will be provided in the local frame at the time at which an input is issued, and can be freely transformed into a fixed global frame or body frame for control purposes. An action \av specified by a continuous external input, such as a joystick, generates a single motion primitive. For a multirotor, we define an action as \av={vx,vz,ω} in the local frame at which the input is issued, where vx is the x-velocity (i.e., the forward velocity of the vehicle), vz is the z-velocity, and ω is the yaw rate. Let \xv

denote a vector containing the position and yaw of the vehicle, i.e.

\xv=[x,y,z,θ]. Then, the endpoint velocities are defined by the unicycle model Pivtoraiko2009. The unicycle model dynamics are given by ˙\xv(\av,τ)=[vxcos(ωτ)vxsin(ωτ)vzω]\transpose, where τ∈[0,T]. The position endpoints are unconstrained and we enforce all higher order derivatives above velocity to be zero.

A regeneration step k occurs when a new input is received from the joystick, or the previous trajectory \gammav(\avk−1,T) finishes executing. Alternatively, a fixed regeneration rate can be chosen in order to accommodate changes in the environment for collision avoidance. Suppose regeneration step k occurs at time tk. Then, a library of dynamically feasible motion primitives is generated in the local frame \Lctk specified by the reference state at time tk, i.e. \xvref(tk)=\gammav(\avk−1,tk−tk−1), given a set of discretized actions \avk. Each motion primitive \gammav is a vector of four 8th order polynomials that specify the trajectory along the position coordinates x, y, z and yaw coordinate θ. Given an action \avk at regeneration step k, each motion in the motion primitive library is generated in frame \Lctk according to

where {⋅}(j) specifies the jth time derivative. Note that all constraints are appropriately transformed into \Lctk. The duration of the trajectory T and the maximum x, z, and yaw velocities are specified according to the desired operational range. We further allow the operator to freely rotate the motion primitive library with respect to \Lctk’s z-axis to allow for sideway slalom motions.

The result of having snap-continuous trajectories (see Fig. 1) ensures that we have smoothness in error dynamics, thus minimizing instabilities and tracking error.

At every time step, the operator input is mapped to the closest input in the action space, as defined by the Euclidean norm. A priority queue that minimizes input distance from the selected input \avjoystick to each input in the action space \avi∈A is used to iterate through the action space until a feasible, collision-free trajectory is found. This results in having the operator input mapped to the feasible motion primitive in the library that is parameterized by the closest discretized action, i.e. \gammav(\avi)=\argmin\norm\avjoystick−\avi. A trajectory is deemed collision-free if the minimum distance between any point along the trajectory and the surrounding environment is above the sum of the vehicle size and an operator specified collision radius. Algorithm 1 describes teleoperation with reactive collision avoidance in detail.

The effect of this pruning algorithm is that the vehicle exhibits natural behavior in the presence of obstacles. If a pillar is in front of the vehicle, then the vehicle chooses a motion primitive some angle away and avoids the obstacle. If a wall is present, then the vehicle will choose linear velocities that gradually decrease until the vehicle is stopped.

KF), a SubFrame (SF), or a BufferFrame (BF) (see Table LABEL:table:frame_classification). The local map (L) is updated in a locally consistent coordinate frame according to the type of sensor frame (F∈{{KF}, {SF}, {BF}}).