Expectation propagation is a general prescription for approximation of integrals in statistical inference problems. Its literature is mainly concerned with Bayesian inference scenarios. However, expectation propagation can also be used to approximate integrals arising in frequentist statistical inference. We focus on likelihood-based inference for binary response mixed models and show that fast and accurate quadrature-free inference can be realized for the probit link case with multivariate random effects and higher levels of nesting. The approach is supported by asymptotic theory in which expectation propagation is seen to provide consistent estimation of the exact likelihood surface. Numerical studies reveal the availability of fast, highly accurate and scalable methodology for binary mixed model analysis. 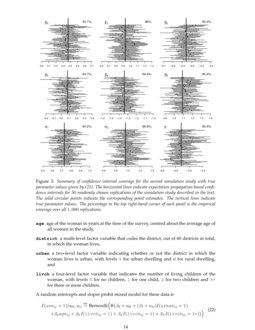 Many models of interest in the natural and social sciences have no close...
Simon Barthelmé, et al. ∙

Binary response mixed model-based data analysis is ubiquitous in many areas of application, with examples such as analysis of biomedical longitudinal data (e.g. Diggle et al., 2002), social science multilevel data (e.g. Goldstein, 2010), small area survey data (e.g. Rao & Molina, 2015) and economic panel data (e.g. Baltagi, 2013). The standard approach for likelihood-based inference in the presence of multivariate random effects is Laplace approximation, which is well-known to be inconsistent and prone to inferential inaccuracy. Our main contribution is to overcome this problem using expectation propagation. The new approach possesses speed and scalability on par with that of Laplace approximation, but is provably consistent and demonstrably very accurate. Bayesian approaches and Monte Carlo methods offer another route to accurate inference for binary response mixed models (e.g. Gelman & Hill, 2007). However, speed and scalability issues aside, frequentist inference is the dominant approach in many areas in which mixed models are used. Henceforth, we focus on frequentist binary mixed model analysis.

To facilitate widespread use of the new approach, a new package in the R language (R Core Team, 2018) has been launched. The package, glmmEP (Wand & Yu, 2018), uses a low-level language implementation of expectation propagation for speedy approximate likelihood-based inference and scales well to large sample sizes.

Binary response mixed models, and their inherent computational challenges, are summarized in Section 2 The expectation propagation approach to fitting and approximate inference, with special attention given to the quadrature-free probit link situation, is given in Section 3. Section 4 presents the results of numerical studies for both simulated and real data, and shows expectation propagation to be of great practical value as a fast, high quality approximation that scales well to big data and big model situations. Theoretical considerations are summarised in Section 5. Higher level and random effects extensions are touched upon in Section 6. Lastly, we briefly discuss transferral of new approach to other generalized linear mixed model settings in Section 7.

where F, the inverse link

, is a pre-specified cumulative distribution function and

yij is the jth response for the ith group, where number of groups is m and the number of responses measurements within the ith group is ni. Also, x\tiny Fij is a d\tiny F×1vector of predictors corresponding to yij, modeled as having fixed effects with coefficient vector β. Similarly, x\tiny Rij is a d\tiny R×1 vector of predictors modeled as having random effects with coefficient vectors ui, 1≤i≤m. Typically, x\tiny Rij is a sub-vector of x\tiny Fij. It is also very common for each of x\tiny Rij and x\tiny Fij to have first entry equal to 1, corresponding to fixed and random intercepts. The random effects covariance matrix Σ has dimension d\tiny R×d\tiny R.

By far, the most common choices for F are

where expit(x)≡1/(1+e−x) and Φ is the cumulative distribution function of the N(0,1) distribution.

Despite the simple form of (1), likelihood-based inference for the parameters β and Σ and best prediction of the random effects ui is very numerically challenging. Assuming that F(x)+F(−x)=1, as is the case for the logistic and probit cases, the log-likelihood is

and the best predictor of ui is

The d\tiny R-dimensional integrals in the ℓ(β,Σ) and BP(ui) expressions cannot be reduced further and multivariate numerical integration must be called upon for their evaluation. In addition, ℓ(β,Σ) has to be maximized over {d\tiny F+12d\tiny R(d% \tiny R+1)}

-dimensional space to obtain maximum likelihood estimates. Lastly, there is the problem of obtaining approximate confidence intervals for the entries of

β and Σ and approximate prediction intervals for the entries of ui.

We will first explain expectation propagation for approximation of the log-likelihood ℓ(β,Σ). Approximation of BP(ui) follows relatively quickly. First note that ℓ(β,Σ)=∑mi=1ℓi(β,Σ) where

Each of the ℓi(β,Σ) are approximated individually and then summed to approximate ℓ(β,Σ) The essence is of the approximation of ℓi(β,Σ) is replacement of each

ℓ(β,Σ). In probit case, where F=Φ, the minimum Kullback-Leibler divergence steps are explicit. This leads to accurate approximation of ℓ(β,Σ) without the need for any numerical integration – just some fixed-point iteration. The expectation propagation-approximate log-likelihood, which we denote by \lx@underaccentset∼ℓ(β,Σ), can be evaluated quite rapidly and maximized using established derivative-free methods such as the Nelder-Mead algorithm (Nelder & Mead, 1965) or quasi-Newton optimization methods such as the Broyden-Fletcher-Goldfarb-Shanno approach with numerical derivatives. The latter also facilitates Hessian matrix approximation at the maximum, which can be used to construct approximate confidence intervals.

We now provide the details, with subsections on each of Kullback-Leibler projection onto unnormalized Multivariate Normal density functions, message passing formulation for organizing the required versions of these projections and quasi-Newton-based approximate inference. The upcoming subsections require some specialized matrix notation. If A is d×d matrix then vec(A) is the d2×1 vector obtained by stacking the columns of A underneath each other in order from left to right. Also, vech(A) is 12d(d+1)+1 vector defined similarly to vec(A) but only involving entries on and below the diagonal. The duplication matrix of order d, denoted by Dd, is the unique d2×12d(d+1) matrix of zeros and ones such that

The Moore-Penrose inverse of Dd is

Let L1(Rd) denote the set of absolutely integrable functions on Rd. For f1,f2∈L1(Rd) such that f1,f2≥0, the Kullback-Leibler divergence of f2 from f1 is

(e.g. Minka, 2005). In the special case where f1 and f2 are density functions the right-hand side of (3) reduces to the more common Kullback-Leibler divergence expression. However, we require this more general form that caters for unnormalized density functions.

Now consider the family of functions on Rd of the form

where η0∈R, η1 is a d×1 vector and η2 is a 12d(d+1)×1 vector restricted in such a way that f\tiny UN∈L1(Rd). Then (4) is the family of unnormalized Multivariate Normal density functions written in exponential family form with natural parameters η0, η1 and η2.

Expectation propagation for generalized linear mixed models with Gaussian random effects has the following notion at its core:

denoting the set of all allowable natural parameters. Note that the special case of Kullback-Leibler projection onto the unnormalized Multivariate Normal family has a simple moment-matching representation, with

(η∗0,η∗1,η∗2) being the unique vector such that zeroth-, first- and second-order moments of f\tiny UN match those of f\tiny input.

For the binary mixed model (1), expectation propagation requires repeated projection of the form

onto the unnormalized Multivariate Normal family. An important observation is that case of probit mixed models, proj[f\tiny input](x) has an exact solution.

where ϕ(x)≡(2π)−1/2exp(−12x2) is the N(0,1) density function. We are now in a position to define two algebraic functions which are fundamental for approximate likelihood-based inference in probit mixed models based on expectation propagation:

and the function AN is given by

Inspection of Definition 1 reveals that the K\tiny probit and C\tiny probit functions are simple functions up to evaluations of log(Φ) and ζ′=ϕ/Φ. Even though software for Φ is widely available, direct computation of log(Φ) and ζ′ can be unstable and software such as the function zeta() in the R package sn (Azzalini, 2017) is recommended. Another option is use of continued fraction representation and Lentz’s Algorithm (e.g. Wand & Ormerod, 2012).

A proof of Theorem 1 is given in Section S.1 of the online supplement.

The ith summand of ℓ(β,Σ) can be written as

are, respectively, the conditional density functions of each response given its random effect and the density function of that random effect. Note that product structure of the integrand in (6) can be represented using factor graph shown in Figure 1. The circle in Figure 1 corresponds to the random vector ui and factor graph parlance is a stochastic variable node. The solid rectangles correspond to each of the ni+1 factors in the (6) integrand. Each of these factors depend on ui, which is signified by an edges connecting each factor node to the lone stochastic variable node.

are initialized to be unnormalized Multivariate Normal density functions in ui. Then, for each j=1,…,ni, the ηij update involves minimization of

as functions of ui. Noting that this problem has the form (5), Theorem 1 can be used to perform the update explicitly in the case of a probit link. This procedure is then iterated until the ηijs converge.

A convenient way to keep track of the updates and compartmentalize the algebra and coding is to call upon the notion of message passing. Minka (2005) shows how to express expectation propagation as a message passing algorithm in the Bayesian graphical models context, culminating in his equation (54) and (83) update formulae. Exactly the same formulae arise here, as is made clear in Section S.2 of the online supplement. In particular, in keeping with (83) of Minka (2005), (8) can be expressed as

In keeping with equation (54) of Minka (2005), the stochastic node to factor messages are updated according to

As laid out at the end of Section 6 of Minka (2005), the expectation message passing protocol is:

where the integrand is in keeping with the general form given by (44) of Minka & Winn (2008). The success of expectation propagation hinges on the fact that each of the messages in (13) is an unnormalized Multivariate Normal density function and the integral over Rd\tiny R can be obtained exactly as follows:

The full algorithm for expectation propagation approximation of ℓ(β,Σ) is summarized as Algorithm 1. The derivational details are given in Section S.2.

We have carried out extensive simulated data tests on Algorithm 1 using the starting values described in Section 3.3 and found convergence to be rapid. Moreover, each of updates in Algorithm 1 involve explicit calculations and low-level language implementation, used in our R package glmmEP, affords very fast evaluation of the approximate log-likelihood surface. As explained in (3.4), quasi-Newton methods can be used for maximization of \lx@underaccentset∼ℓ(β,Σ) and approximate likelihood-based inference.

In Section S.3 we use a Taylor series argument to justify the following starting values for \largeη\footnotesizep(yij|ui;β)→ui in Algorithm 1:

and ˆui is a prediction of ui. A convenient choice for ˆui is that based on Laplace approximation. In the R computing environment the function glmer() in the package lme4 (Bates et al., 2015) provides fast Laplace approximation-based predictions for the ui. In our numerical experiments, we found convergence of the cycle loop of Algorithm 1 to be quite rapid, with convergents of

Since \lx@underaccentset∼ℓ(β,Σ) is defined implicitly via an iterative scheme, differentiation for use in derivative-based optimization techniques is not straightforward. A practical workaround involves the employment of optimization methods such as those of the quasi-Newton variety for which derivatives are approximated numerically. In the R computing environment the function optim() supports several derivative-free optimization implementations. The Matlab computing environment (The Mathworks Incorporated, 2018) has similar capabilities via functions such as fminunc(). In the glmmEP package and the examples in Section 4 we use the Broyden-Fletcher-Goldfarb-Shanno quasi-Newton method (Broyden, 1970; Fletcher 1970; Goldfarb, 1970; Shanno, 1970) with Nelder-Mead starting values. Section 2.2.2.3 of Givens & Hoetig (2005) provides a concise summary of the Broyden-Fletcher-Goldfarb-Shanno method.

Since Σ is constrained to be symmetric and positive definite, we instead perform quasi-Newton optimization over the unconstrained parameter vector (β,θ) where