Fairness and Robustness of Contrasting Explanations 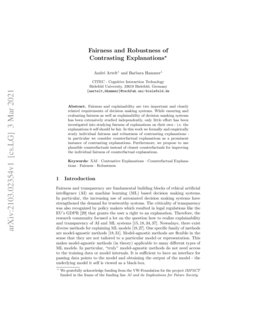 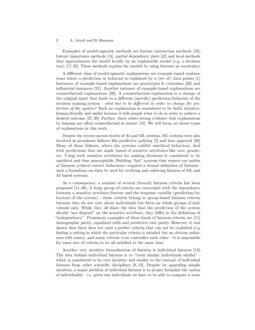 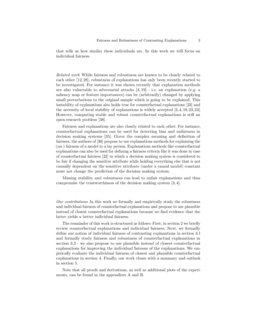 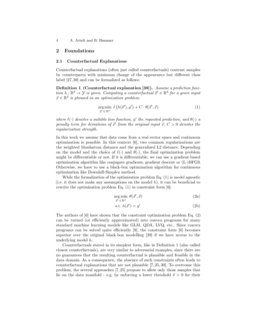 Fairness and transparency are fundamental building blocks of ethical artificial intelligence (AI) an machine learning (ML) based decision making systems. In particular, the increasing use of automated decision making systems have strengthened the demand for trustworthy systems. The criticality of transparency was also recognized by policy makers which resulted in legal regulations like the EU’s GDPR

[29] that grants the user a right to an explanation. Therefore, the research community focused a lot on the question how to realize explainability and transparency of AI and ML systems [15, 18, 37, 34]. Nowadays, there exist diverse methods for explaining ML models [18, 27]. One specific family of methods are model-agnostic methods [18, 31]. Model-agnostic methods are flexible in the sense that they are not tailored to a particular model or representation. This makes model-agnostic methods (in theory) applicable to many different types of ML models. In particular, “truly” model-agnostic methods do not need access to the training data or model internals. It is sufficient to have an interface for passing data points to the model and obtaining the output of the model - the underlying model it self is viewed as a black-box.

and local methods that approximates the model locally by an explainable model (e.g. a decision tree)

[32, 17]. These methods explain the models by using features as vocabulary.

Despite the recent success stories of AI and ML systems, ML systems were also involved in prominent failures like predictive policing [5] and loan approval [40]. Many of those failures, where the systems exhibit unethical behaviour, deal with predictions that are made based of sensitive attributes like race, gender, etc. Using such sensitive attributes for making decisions is considered to be unethical and thus unacceptable. Building “fair” systems that respect our notion of fairness (ethical correct behaviour) requires a formal definition of fairness - such a formalism can then be used for verifying and enforcing fairness of ML and AI based systems.

As a consequence, a number of several (formal) fairness criteria has been proposed [26, 11]

. A large group of criteria are concerned with the dependency between a sensitive attribute/feature and the response variable (prediction/behaviour of the system) - these criteria belong to group-based fairness criteria because they do not care about individuals but focus on whole groups of individuals only. While they all share the idea that the prediction of the system should “not depend” on the sensitive attribute, they differ in the definition of “independency”. Prominent examples of these kinds of fairness criteria are

demographic parity, equalized odds and predictive rate parity. However, it was shown that there does not exist a perfect criteria that can not be exploited (e.g. finding a setting in which the particular criteria is satisfied but an obvious unfairness still exists), and many criteria even contradict each other - it is impossible for some sets of criteria to be all satisfied at the same time.

Missing stability and robustness can lead to unfair explanations and thus compromise the trustworthiness of the decision making system [3, 4].

Note that all proofs and derivations, as well as additional plots of the experiments, can be found in the appendices 0.A and 0.B.

Counterfactual explanations (often just called counterfactuals) contrast samples by counterparts with minimum change of the appearance but different class label [39, 27] and can be formalized as follows:

Assume a prediction function h:Rd→Y is given. Computing a counterfactual →x′∈Rd for a given input →x∈Rd is phrased as an optimization problem:

y′ the requested prediction, and θ(⋅) a penalty term for deviations of →x′ from the original input →x. C>0 denotes the regularization strength.

In this work we assume that data come from a real-vector space and continuous optimization is possible. In this context

The authors of [6] have shown that the constraint optimization problem Eq. (2) can be turned (or efficiently approximated) into convex programs for many standard machine learning models like GLM, QDA, LVQ, etc.. Since convex programs can be solved quite efficiently [9], the constraint form [6] becomes superior over the original black-box modelling [39] if we have access to the underlying model h.

Counterfactuals stated in its simplest form, like in Definition 1 (also called closest counterfactuals), are very similar to adversarial examples, since there are no guarantees that the resulting counterfactual is plausible and feasible in the data domain. As a consequence, the absence of such constraints often leads to counterfactual explanations that are not plausible [7, 25, 30]. To overcome this problem, the several approaches [7, 25] propose to allow only those samples that lie on the data manifold - e.g. by enforcing a lower threshold δ>0

for their probability/density. In particular, the authors of

[7] build upon the constraint form Eq. (2) and propose the following extension of Eq. (2) for computing plausible counterfactuals: equationparentequation

denotes a class dependent density estimator. Because the true density is usually not known, they further propose to replace the density constraint Eq. (

3 Fairness and Robustness of Counterfactual Explanations

In the sub sequel we formally study and define individual fairness and robustness of counterfactual explanations for general as well as specific prediction functions h:X→Y.

Let h:X→Y be a prediction function and (→xorig,yorig)∈X×Y with h(→xorig)=yorig be a sample prediction that has to be explained. For this purpose, let (→x′,y′)∈X×Y be a counterfactual explanations of (→xorig,yorig).

Let (→x′′,y′)∈X×Y be a counterfactual explanations of this perturbed sample (→x,yorig) with the same target label y′.

We define the individual fairness of the explanation (→x′,y′) as the expected distance between the between the counterfactual explanations of the original sample →xorig and a perturbed sample →x:

By replacing the expectation in Eq. (5) with the sample mean gives us a method for empirically comparing the individual fairness (according to Definition 2) of different counterfactual explanations.

Note that the fairness criteria Eq. (5) is to be minimized - i.e. smaller values correspond to a better individual fairness.

where the size and shape of the perturbation can be controlled by the covariance matrix Σ - in this work we use a diagonal matrix and often choose Σ=I. However, note that in this perturbation we can not guarantee that the perturbed sample is ϵ close because N(→0,Σ) can yield arbitrarily large values although this is kind of unlikely.

While a perturbation by Gaussian noise Eq. (6) potentially changes every feature, feature masking allows a much more precise way of perturbing a given input:

In this section we formally study robustness and fairness of different prediction functions h. First, we give a very general bound on the robustness of closest counterfactual explanations in Theorem 3.1.

We can then bound the difference between the two counterfactuals →x′ and →x′′ as follows:

In case of a binary linear classifier, we can refine the bound from Theorem

Note that while the general bound Eq. (8) in Theorem 3.1 depends on the closest counterfactual of the unperturbed sample →xorig, the bound Eq. (9) in Corollary 1 only depends on the original sample →xorig, the model parameter →w and the perturbation bound ϵ. Both bounds (Theorem 3.1 and Corollary 1) are rather loose because they do not make any assumption on the perturbation Bϵ except that it must be bounded by ϵ - in addition the bound in Theorem 3.1 does not even make any assumption on h at all.

Making additional assumptions allow us to come up with more precise (and potentially more useful) statements as shown in the next theorem Theorem 3.2. In Theorem 3.2 (and the consequential corollaries Corollary 2 and Corollary 3) we study the individual fairness of a linear binary classifier under Gaussian noise. It turns out, that the individual fairness Definition 2 of closest counterfactual explanations of a binary linear classifier under Gaussian noise depends on the dimension d only - i.e. the larger the dimension of the input space, the larger the individual unfairness.

Let h:Rd→{−1,1} be a binary linear classifier - i.e. h(→x)=sgd(→w⊤→x). The individual fairness of closest counterfactuals (see Definition 2) under Gaussian noise Eq. (6) - with an arbitrary diagonal covariance Σ=diag(σ2i) - at an arbitrary (correctly classified) sample (→xorig,yorig)∈Rd×{−1,1} can be stated as follows:

where we assume the squared Euclidean distance as a distance metric d(⋅) for measuring the distance between two counterfactuals.

If we assume the identity matrix

I as a covariance matrix Σ of the Gaussian noise in Theorem 3.2, Eq. (10) simplifies as follows:

Theorem 3.2 and Corollary 2 imply the following upper bound on the probability that the individual unfairness is larger than some δ>0:

We can interpret Theorem 3.2 (and in particular the consequential correlaries Corollary 2 and Corollary 3

d of the data space, the larger the individual unfairness.

We can still make some statements on the individual fairness Definition 2 of closest counterfactual explanations, when using bounded uniform noise instead of Gaussian noise, as stated in Theorem 3.3 and Corollary 4.

Let h:Rd→{−1,1} be a binary linear classifier - i.e. h(→x)=sgd(→w⊤→x). The individual fairness of closest counterfactuals (see Definition 2) under a bounded uniform noise at an arbitrary (correctly classified) sample (→xorig,yorig)∈Rd×{−1,1} can be stated follows:

Theorem 3.3 implies the following upper bound on the probability that the individual unfairness is larger than some δ>0:

We use the three standard data sets:

Because PCA preprocessing is an affine transformation, we can integrate the transformation into the convex programs and therefore still compute counterfactuals in the original data space [6].

3 prototypes per class and use 7 as the maximum depth of decision tree classifiers.

We report the results of the following experiments over a 4-fold cross validation: We fit all models on the training data (depending on the data set this might involve a PCA as a preprocessing) and compute a closest and plausible counterfactual explanations of all samples from the test set that are classified correctly by the model - whereby we compute counterfactuals of the original as well as the perturbed sample. We use two different types of perturbations: Gaussian noise Eq. (6) with Σ=I and feature masking Eq. (7) for one up to half of the total number of features. In case of a multi-class problem, we chose a random target label that is different from the original label. We compute and report the distance between the counterfactuals of the original sample and the perturbed sample Eq. (5) - we do this separately for closest and plausible counterfactuals. Furthermore, we use MOSEK111We gratefully acknowledge an academic license provided by MOSEK ApS. as a solver for all mathematical programs. The complete implementation of the experiments is available on GitHub222https://github.com/andreArtelt/FairnessRobustnessContrastingExplanations.

The results of using Gaussian noise Eq. (6) for perturbing the samples are shown in Table 1. The results on the digit data set for increasingly masking more and more features Eq. (7) are shown in Fig. 1 - plots for the other data sets are given in appendix 0.B.

In future work we plan to further study formal fairness and robustness guarantees and bounds of more models and different perturbations. We also would like to investigate other approaches and methodologies for computing plausible counterfactual explanations - the work [7] we used in this work is only one possible approach for computing plausible counterfactuals, other approaches exist as well [30, 25]. Finally, we are highly interested in studying the problem of individual fairness of (contrasting) explanations from a psychological perspective - i.e. investigating how people actually experience individual fairness of contrasting explanations and whether this experience is successfully captured/modelled by our proposed formalizations and methods.

Appendix 0.A Proofs and Derivations