In a mathematics workshop with mn mathematicians from n different areas, each area consisting of m mathematicians, we want to create a collaboration network. For this purpose, we would like to schedule daily meetings between groups of size three, so that (i) two people of the same area meet one person of another area, (ii) each person has exactly r meeting(s) each day, and (iii) each pair of people of the same area have exactly λ meeting(s) with each person of another area by the end of the workshop. Using hypergraph amalgamation-detachment, we prove a more general theorem. In particular we show that above meetings can be scheduled if: 3 | rm, 2 | rnm and r | 3λ(n-1)m2. This result can be viewed as an analogue of Baranyai's theorem on factorizations of complete multipartite hypergraphs. 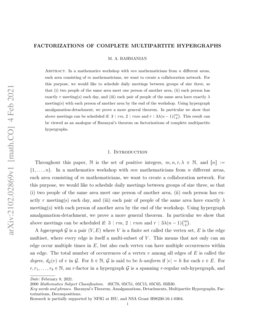 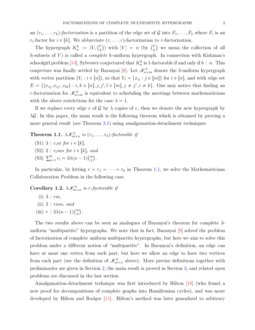 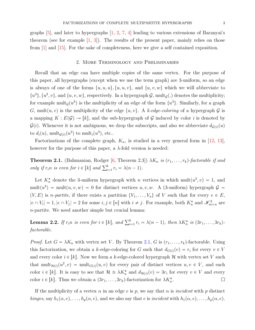 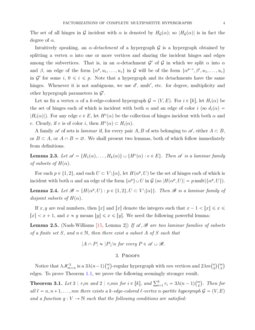 Throughout this paper, N is the set of positive integers, m,n,r,λ∈N, and [n]:={1,…,n}. In a mathematics workshop with mn mathematicians from n different areas, each area consisting of m mathematicians, we want to create a collaboration network. For this purpose, we would like to schedule daily meetings between groups of size three, so that (i) two people of the same area meet one person of another area, (ii) each person has exactly r meeting(s) each day, and (iii) each pair of people of the same area have exactly λ meeting(s) with each person of another area by the end of the workshop. Using hypergraph amalgamation-detachment, we prove a more general theorem. In particular we show that above meetings can be scheduled if: 3\dividesrm, 2\dividesrnm and r\divides3λ(n−1)(m2).

A hypergraph G is a pair (V,E) where V is a finite set called the vertex set, E is the edge multiset, where every edge is itself a multi-subset of V. This means that not only can an edge occur multiple times in E, but also each vertex can have multiple occurrences within an edge. The total number of occurrences of a vertex v among all edges of E is called the degree, dG(v) of v in G. For h∈N, G is said to be h-uniform if |e|=h for each e∈E. For r,r1,…,rk∈N, an r-factor in a hypergraph G is a spanning r-regular sub-hypergraph, and an (r1,…,rk)-factorization is a partition of the edge set of G into F1,…,Fk where Fi is an ri-factor for i∈[k]. We abbreviate (r,…,r)-factorization to r-factorization.

The hypergraph Khn:=(V,(Vh)) with |V|=n (by (Vh) we mean the collection of all h-subsets of V) is called a complete h-uniform hypergraph. In connection with Kirkman’s schoolgirl problem [14], Sylvester conjectured that Khn is 1-factorable if and only if h\dividesn. This conjecture was finally settled by Baranyai [8]. Let K3n×m denote the 3-uniform hypergraph with vertex partition {Vi:i∈[n]}, so that Vi={xij:j∈[m]} for i∈[n], and with edge set E={{xij,xij′,xkl}:i,k∈[n],j,j′,l∈[m],j≠j′,i≠k}. One may notice that finding an r-factorization for K3n×m is equivalent to scheduling the meetings between mathematicians with the above restrictions for the case λ=1.

If we replace every edge e of G by λ copies of e, then we denote the new hypergraph by λG. In this paper, the main result is the following theorem which is obtained by proving a more general result (see Theorem 3.1) using amalgamation-detachment techniques.

In particular, by letting r=r1=⋯=rk in Theorem 1.1, we solve the Mathematicians Collaboration Problem in the following case.

The two results above can be seen as analogues of Baranyai’s theorem for complete 3-uniform “multipartite” hypergraphs. We note that in fact, Baranyai [9] solved the problem of factorization of complete uniform multipartite hypergraphs, but here we aim to solve this problem under a different notion of “multipartite”. In Baranyai’s definition, an edge can have at most one vertex from each part, but here we allow an edge to have two vertices from each part (see the definition of K3m×n above). More precise definitions together with preliminaries are given in Section 2, the main result is proved in Section 3, and related open problems are discussed in the last section.

Amalgamation-detachment technique was first introduced by Hilton [10] (who found a new proof for decompositions of complete graphs into Hamiltonian cycles), and was more developed by Hilton and Rodger [11]. Hilton’s method was later genealized to arbitrary graphs [5], and later to hypergraphs [1, 2, 7, 4] leading to various extensions of Baranyai’s theorem (see for example [1, 3]). The results of the present paper, mainly relies on those from [1] and [15]. For the sake of completeness, here we give a self contained exposition.

Recall that an edge can have multiple copies of the same vertex. For the purpose of this paper, all hypergraphs (except when we use the term graph) are 3-uniform, so an edge is always of one of the forms {u,u,u},{u,u,v}, and {u,v,w} which we will abbreviate to {u3},{u2,v}, and {u,v,w}, respectively. In a hypergraph G, multG(.) denotes the multiplicity; for example multG(u3) is the multiplicity of an edge of the form {u3}. Similarly, for a graph G, mult(u,v) is the multiplicity of the edge {u,v}. A k-edge-coloring of a hypergraph G is a mapping K:E(G)→[k], and the sub-hypergraph of G induced by color i is denoted by G(i). Whenever it is not ambiguous, we drop the subscripts, and also we abbreviate dG(i)(u) to di(u), multG(i)(u3) to multi(u3), etc..

Factorizations of the complete graph, Kn, is studied in a very general form in [12, 13], however for the purpose of this paper, a λ-fold version is needed:

Intuitively speaking, an α-detachment of a hypergraph G is a hypergraph obtained by splitting a vertex α into one or more vertices and sharing the incident hinges and edges among the subvertices. That is, in an α-detachment G′ of G in which we split α into α and β, an edge of the form {αp,u1,…,uz} in G will be of the form {αp−i,βi,u1,…,uz} in G′ for some i, 0≤i≤p. Note that a hypergraph and its detachments have the same hinges. Whenever it is not ambiguous, we use d′, mult′, etc. for degree, multiplicity and other hypergraph parameters in G′.

A family A of sets is laminar if, for every pair A,B of sets belonging to A, either A⊂B, or B⊂A, or A∩B=∅. We shall present two lemmas, both of which follow immediately from definitions.

If x,y are real numbers, then ⌊x⌋ and ⌈x⌉ denote the integers such that x−1<⌊x⌋≤x≤⌈x⌉<x+1, and x≈y means ⌊y⌋≤x≤⌈y⌉. We need the following powerful lemma:

(Nash-Williams [15, Lemma 2]) If A,B are two laminar families of subsets of a finite set S, and n∈N, then there exist a subset A of S such that

Notice that λK3m×n is a 3λ(n−1)(m2)-regular hypergraph with nm vertices and 2λm(n2)(m2) edges. To prove Theorem 1.1, we prove the following seemingly stronger result.

It is implicitly understood that every other type of edge in G is of multiplicity 0.

The idea of the proof of Theorem 3.1 is that each vertex α will be split into g(α) vertices and that this will be done by “splitting off” single vertices one at a time.

Proof of Theorem 3.1. We prove the theorem by induction on ℓ.

Since ℓ<mn, G is n-partite and (C1) holds for G, there exists a vertex α of G with g(α)>1. The graph G′ will be constructed as an α-detachment of G with the help of laminar families

Let G′=(V′,E′) with V′=V∪{β} be the hypergraph obtained from G by splitting α into two vertices α and β in such a way that hinges which were incident with α in G become incident in G′ with α or β according to whether they do not or do belong to Z, respectively. More precisely,

Finally, let u,v∈V′ so that u,v belong to the same part of G′, and u,α belong to different parts of G′, and u∉{α,β}. By an argument very similar to the one above, we have

Therefore G′ satisfies (C3), and the proof is complete. ∎

We define K3m1,…,mn similar to K3m×n with the difference that in K3m1,…,mn we allow different parts to have different sizes. It seems reasonable to conjecture that

We prove the necessity as follows. Since λK3m×n is factorable, it must be regular. Let u and v be two vertices from two different parts, say pth and qth parts respectively. Then we have the following sequence of equivalences:

In Theorem 1.1, we made partial progress toward settling Conjecture 4.1, however at this point, it is not clear to us whether our approach will work for the remaining cases.

The author is deeply grateful to Professors Chris Rodger, Mateja Šajna, and the anonymous referee for their constructive comments.