We present two simple ways of reducing the number of parameters and accelerating the training of large Long Short-Term Memory (LSTM) networks: the first one is "matrix factorization by design" of LSTM matrix into the product of two smaller matrices, and the second one is partitioning of LSTM matrix, its inputs and states into the independent groups. Both approaches allow us to train large LSTM networks significantly faster to the state-of the art perplexity. On the One Billion Word Benchmark we improve single model perplexity down to 23.36. 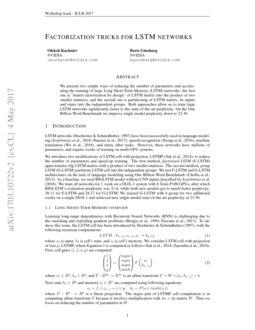 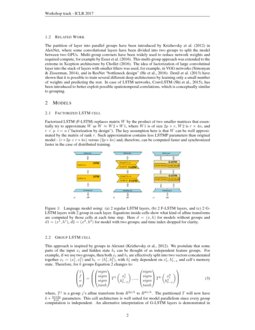 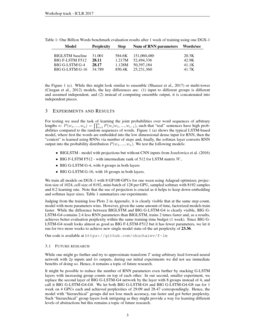 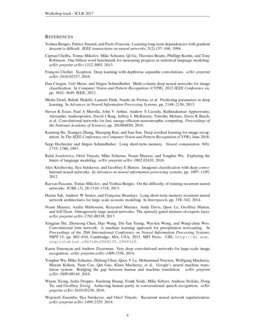 In this paper, we propose the use of in-training matrix factorization to...
Zachary Kaden, et al. ∙

We introduce two modifications of LSTM cell with projection, LSTMP (Sak et al., 2014), to reduce the number of parameters and speed-up training. The first method, factorized LSTM (F-LSTM) approximates big LSTM matrix with a product of two smaller matrices. The second method, group LSTM (G-LSTM) partitions LSTM cell into the independent groups. We test F-LSTM and G-LSTM architectures on the task of language modeling using One Billion Word Benchmark (Chelba et al., 2013). As a baseline, we used BIGLSTM model without CNN inputs described by Jozefowicz et al. (2016). We train all networks for 1 week on a DGX Station system with 4 Tesla V100 GPUs, after which BIGLSTM’s evaluation perplexity was 35.1. Our G-LSTM based model got 36 and F-LSTM based model got 36.3 while using two to three times less RNN parameters.

(Bengio et al., 1994; Pascanu et al., 2013). To address this issue, the LSTM cell has been introduced by Hochreiter & Schmidhuber (1997), with the following recurrent computations:

where P:Rn→Rp is a linear projection. The major part of LSTMP cell computation is in computing affine transform T because it involves multiplication with 4n×2p matrix W. Thus we focus on reducing the number of parameters in W.

The partition of layer into parallel groups have been introduced by Krizhevsky et al. (2012) in AlexNet, where some convolutional layers have been divided into two groups to split the model between two GPUs. Multi-group convnets have been widely used to reduce network weights and required compute, for example by Esser et al. (2016). This multi-group approach was extended to the extreme in Xception architecture by Chollet (2016). The idea of factorization of large convolutinal layer into the stack of layers with smaller filters was used, for example, in VGG networks (Simonyan & Zisserman, 2014), and in ResNet “bottleneck design” (He et al., 2016). Denil et al. (2013) have shown that it is possible to train several different deep architectures by learning only a small number of weights and predicting the rest. In case of LSTM networks, ConvLSTM (Shi et al., 2015), has been introduced to better exploit possible spatiotemporal correlations, which is conceptually similar to grouping.

Factorized LSTM (F-LSTM) replaces matrix W by the product of two smaller matrices that essentially try to approximate W as W≈W2∗W1, where W1 is of size 2p×r, W2 is r×4n, and r<p<=n (”factorization by design”). The key assumption here is that W can be well approximated by the matrix of rank r. Such approximation contains less LSTMP parameters than original model - (r∗2p+r∗4n) versus (2p∗4n) and, therefore, can be computed faster and synchronized faster in the case of distributed training.

This approach is inspired by groups in Alexnet (Krizhevsky et al., 2012). We postulate that some parts of the input xt and hidden state ht can be thought of as independent feature groups. For example, if we use two groups, then both xt and ht

are effectively split into two vectors concatenated together

xt=(x1t,x2t) and ht=(h1t,h2t), with hit only dependent on xit, hit−1 and cell’s memory state. Therefore, for k groups Equation 2 changes to:

where, Tj is a group j’s affine transform from R2p/k to R4n/k. The partitioned T will now have k∗4n∗2pk∗k parameters. This cell architecture is well suited for model parallelism since every group computation is independent. An alternative interpretation of G-LSTM layers is demonstrated in the Figure 1 (c). While this might look similar to ensemble (Shazeer et al., 2017) or multi-tower (Ciregan et al., 2012) models, the key differences are: (1) input to different groups is different and assumed independent, and (2) instead of computing ensemble output, it is concatenated into independent pieces.

(a) shows the typical LSTM-based model, where first the words are embedded into the low dimensional dense input for RNN, then the “context” is learned using RNNs via number of steps and, finally, the softmax layer converts RNN output into the probability distribution

We train all models on DGX Station with 4 GV100 GPUs for one ween using Adagrad optimizer, projection size of 1024, cell size of 8192, mini-batch of 256 per GPU, sampled softmax with 8192 samples and 0.2 learning rate. Note that the use of projection is crucial as it helps to keep down embedding and softmax layer sizes. Table 1 summarizes our experiments.

Judging from the training loss Plots 2 in Appendix, it is clearly visible that at the same step count, model with more parameters wins. However, given the same amount of time, factorized models train faster. While the difference between BIGLSTM and BIG G-LSTM-G2 is clearly visible, BIG G-LSTM-G2 contains almost 2 times less RNN parameters than BIGLSTM, trains faster and, as a results, achieves similar evaluation perplexity within the same training time budget (1 week).

Our code is available at https://github.com/okuchaiev/f-lm

While one might go further and try to approximate transform T

2p inputs and 4n outputs, during our initial experiments we did not see immediate benefits of doing so. Hence, it remains a topic of future research.

It might be possible to reduce the number of RNN parameters even further by stacking G-LSTM layers with increasing group counts on top of each other. In our second, smaller experiment, we replace the second layer of BIG G-LSTM-G4 network by the layer with 8 groups instead of 4, and call it BIG G-LSTM-G4-G8. We let both BIG G-LSTM-G4 and BIG G-LSTM-G4-G8 ran for 1 week on 4 GPUs each and achieved very similar perplexities. Hence, the model with “hierarchical” groups did not lose much accuracy, ran faster and got better perplexity. Such “hierarchical” group layers look intriguing as they might provide a way for learning different levels of abstractions but this remains a topic of future research.

Acknowledgements We are grateful to Scott Gray and Ciprian Chelba for helping us identify and correct issues with earlier versions of this work.