Automated facial expression detection problem pose two primary challenges that include variations in expression and facial occlusions (glasses, beard, mustache or face covers). In this paper we introduce a novel automated patch creation technique that masks a particular region of interest in the face, followed by Eigen-value decomposition of the patched faces and generation of Isomaps to detect underlying clustering patterns among faces. The proposed masked Eigen-face based Isomap clustering technique achieves 75 and 66-73 faces in around 1 second per image. Also, betweenness centrality, Eigen centrality and maximum information flow can be used as network-based measures to identify the most significant training faces for expression classification tasks. The proposed method can be used in combination with feature-based expression classification methods in large data sets for improving expression classification accuracies. 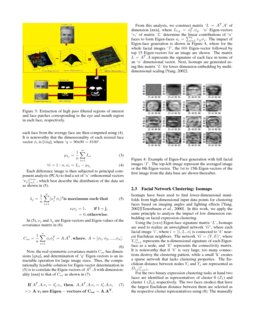 rely heavily on facial feature extraction and classifier training, and thereby incur significant computational complexity in the training phase. In this work, we propose a novel network-based clustering algorithm that is capable of separating the marginally classifiable expression faces from the easily classifiable ones. This method has two-fold advantages. First, this method can be used to reduce the overall computational time complexity for facial expression detection in a particular test data base of faces by subjecting only the faces with marginally classifiable expressions to complex feature-based classification. Second, the network-based metrics can be used to detect the most significant faces in the training data that are vital for feature-based expression classification tasks. Such network-based identification of most significant training image set has not been done in existing works so far. Identification of the most significant training faces can improve the existing accuracies in facial expression classification on facial test data sets.

The existing facial expression detection algorithms can be broadly categorized into two categories: holistic methods [Lonare and Jain2013] that focus on features of the full face, and geometric methods that depend on important parts of the face such as eye lids, eye brows, lips, nose etc. for expression detection [Ekman and Rosenberg1997] [Ekman and Friesen1971]. The first category of methods focus on pre-defined template matching (active shape models)[Hemalatha and Sumathi2014]

[Hemalatha and Sumathi2014]. The second category of methods rely on the extraction of gray-scale and color features corresponding to facial features (group of edges) [Hemalatha and Sumathi2014], texture, and changes in eye-lids, eye-brows, nose, lips, wrinkles and bulges using local binary patterns (LBP) [Ojala et al.2002], optical flow [Dehkordi and Haddadnia2010] and pyramid extension of the histogram of gradient (PHOG) descriptors [Bosch et al.2007] [Dalal and Triggs2005]. For various classifier and training data sets, existing expression classification accuracies typically range between 50-95% [Hemalatha and Sumathi2014] [Lajevardi and Wu2012] while computation time can range from 4.5 seconds to a few hours. The proposed method aims at significantly reducing the computation time and improving expression classification accuracies in data bases with a large number of faces. In this work, two classification tasks are performed that include classification of images with facial occlusions and classification of faces with happy emotion, respectively. Unsupervised classification requires only 2 training images for cluster identification with a run-time of less than 1 second per image in a 2.6 GHz 2GB RAM Laptop.

The data set used to analyze the expression classification performance are taken from the AT&T Cambridge Laboratories data base [Laboratories2002], which contains 400 facial images of dimension [112x92] pixels each, with varying expression, pose and lighting angles from 40 subjects with 10 images per subject. For our analysis we manually annotate the expressions in 80 facial images corresponding to the first and tenth image per subject for the 40 subjects. For classification Task 1 the faces with glasses are assigned class label 1 and for the faces without glasses the class label is 0. For classification Task 2 the smiling faces are assigned class label 1 and for the faces without a smile the class label is 0. To reduce the computational complexity, each facial image ‘I’ is resized to [90x90] pixels.

First, face patches corresponding to the eye region (Reye), indicative of occlusions due to glasses, and the mouth region (Rmouth), indicative of smile are created. Next, Eigen-faces corresponding to the patched faces are extracted and a signature matrix of all the patched faces is created. For a set of n faces, the Eigen-face signature matrix has dimensionality of [nxn]. Isomaps are then used to realize a 2-dimensional network from the facial signature matrix. Two nodes/faces in the network that have maximum Euclidean distance between them are detected as cluster identifiers followed by minimum-distance clustering of all remaining faces. The steps in the proposed algorithm are shown in Figure 2. Each step is described below.

To generate guided patches for smiling expression and facial occlusion identification, each facial image is thresholded to generate a foreground mask followed by high-pass filtering to extract several regions of interest (R). 3 features are evaluated for each of the regions in ‘R’ namely, major axis length (ρ(R)), minor axis length (ψ(R)) and angular orientation (θ(R)). The eye region (Reye), indicative of occlusions due to glasses, contains high-pass filtered regions that are partially elliptical (ρ(R)ψ(R)<5) and almost horizontal (argmin(θ(R))) as shown in (1). The mouth region (Rmouth) on the other hand is elongated and narrow (ρ(R)ψ(R)>6) and almost horizontal (argmin(θ(R))) as shown in (2).

Finally, two face patches are created starting from the centroid of the region in ‘Reye’ and ‘Rmouth’, respectively, and extending 15 pixels above and below the centroid with length similar to that of the original image. These patches applied to image ‘I’ results in patched image of the eye (Ie) and mouth (Im) as shown in Figure 3, respectively.

For each patched image ‘Ie,Im’, the Karhunen-Loeve expansion [Kirby and Sirovich1990] is applied to find vectors that best represent the distribution of face images {Ie1,Ie2...Ien},{Im1,Im2...Imn},n=80. The steps of Eigen-face generation for the patched eye images (Ie) in Task 1 are shown below. Similar steps are followed for the patched mouth images (Im) in Task 2. The mean facial image is computed as the 0th Eigen-vector using (3). The differences of each face from the average face are then computed using (4). It is noteworthy that the dimensionality of each resized face vector ϕi is [1xq], where ‘q=90x90=8100’.

νj|j=nj=1’, which best describe the distribution of the data set as shown in (5).

Now, the real symmetric covariance matrix Cov has dimensions [qxq], and determination of ‘q’ Eigen-vectors is an intractable operation for large image sizes. Thus, the computationally feasible solution for Eigen-vector determination in (5) is to correlate the Eigen-vectors of AT.A with dimensionality [nxn] to that of Cov as shown in (7).

From this analysis, we construct matrix ‘L=AT.A’ of dimension [nxn], where Ll,q=ϕTl.ϕq. ‘n’ Eigen-vectors ‘vi’ of matrix ‘L’ determine the linear contributions of ‘n’ faces to form Eigen-faces ui=∑ni=1vijϕj. The impact of Eigen-face generation is shown in Figure 4, where for the whole facial images ‘I’, the 0th Eigen-vector followed by top 15 Eigen-vectors for an image are shown. The matrix L=AT.A represents the signature of each face in terms of an ‘n’ dimensional vector. Next, Isomaps are generated using this matrix ‘L’ for lower dimension embedding by multi-dimensional scaling [Yang2002].

Isomaps have been used to find lower-dimensional manifolds from high-dimensional input data points for clustering faces based on imaging angles and lighting effects [Yang2002][Tenenbaum et al.2000]. In this work, we apply the same principle to analyze the impact of low dimension embedding on facial expression clustering.

Using the [nxn] Eigen-face signature matrix ‘L’, Isomaps are used to realize an unweighted network ‘G’, where each facial image ‘i’, where i=[1,2...n] is connected to ‘k’ nearest Euclidean neighbors. The network ‘G=(Y,E)’, where Yi|ni=1 represents the n-dimensional signature of each Eigen-face as a node, and ‘E’ represents the connectivity matrix. It is noteworthy that if ‘k’ is very large, too many connections destroy the clustering pattern, while a small ‘k’ creates a sparse network that lacks clustering properties. The Euclidean distance between nodes Yi and Yj are represented as Di,j|ni,j=1.

For the two binary expression clustering tasks at hand two faces are identified as representatives of cluster 0 (Z1) and cluster 1 (Z2), respectively. The two faces (nodes) that have the largest Euclidean distance between them are selected as the respective cluster representatives using (8). The manually annotated expression class labels of faces Z1 (CZ1) and Z2 (CZ2) corresponding to the classification tasks are then read. These two faces become the training data. For every remaining face, the Euclidean distance of each face from Z1 and Z2 are computed, followed by assignment of the class label that is at the shortest distance from each face as shown in (9). The assigned class label are [0,1] due to the binary classification tasks.

In the second experiment, the 2-d patched face network is analyzed to detect the faces that have most discriminating characteristics for expression classification.

In Table 1, we observe that for low nearest neighbor parameters (k=3,5,7), the Isomaps demonstrate sparsely connected clustering patterns that have high classification characteristics than for higher values of ‘k’. Also, we observe that patched Eigen-face networks have comparable classification performance for occlusions when compared to full Eigen-face networks. However, in Table 1

After all faces have been clustered using (8-9), the most significant faces that are central to the two expression clusters are detected using network centrality measures. High betweenness centrality (B) locates nodes in a network that serve as bridge nodes connecting two dense clusters [Roychowdhury2010]. Thus, the two faces/nodes in the Isomap network that have the top two betweenness centralities (B1, B2) represent the faces that lie at the edge of the expression clusters as the marginally classifiable faces.

High Eigen-centrality(EC) is another measure that detects nodes in the network that are most centrally located. Thus, the faces with top two Eigen-centralities (EC1, EC2) represent the faces that are central to the two decision clusters. For Task 1 and Task 2 the decision clusters and the faces/nodes with top two centrality metrics for full face and proposed patched face network are shown in Figure 5.

In Figure 5 we observe that for full Eigen-face networks, the nodes/faces with high B are different from faces with high EC, however for the patched face networks, certain faces concurrently have high B and EC. In Task 1 and Task 2, the most central patched faces are shown in Figure 6. From this observation we infer that patched faces with high centralities are central to the expression clusters and they also serve as bridge node connections to the other cluster. Thus, identification of these faces/nodes with high centrality measure and using them as training data can further improve the feature-based expression classification performances.

In this work we propose an automated facial patch creation method to isolate certain regions of a face regardless of the pose and lighting conditions followed by Eigen-face decomposition and Isomap clustering for classification of facial expressions. We observe that patched Eigen-face Isomap networks created with low neighborhood parameter (k) values have higher sensitivity than full Eigen-face networks for facial occlusion and smile classification tasks. Additionally, network-based centrality and information flow in networks can be used as measures to detect the most significant subset of faces for feature-based expression classification tasks. The proposed method requires an average of 0.25 seconds per image for generating automated facial masks, 0.75 seconds for Eigen-face decomposition and Isomap network creation followed by 0.1s for clustering the faces/nodes for each classification task.