Residual representation learning simplifies the optimization problem of learning complex functions and has been widely used by traditional convolutional neural networks. However, it has not been applied to deep neural decision forest (NDF). In this paper we incorporate residual learning into NDF and the resulting model achieves state-of-the-art level accuracy on three public age estimation benchmarks while requiring less memory and computation. We further employ gradient-based technique to visualize the decision-making process of NDF and understand how it is influenced by facial image inputs. The code and pre-trained models will be available at https://github.com/Nicholasli1995/VisualizingNDF. 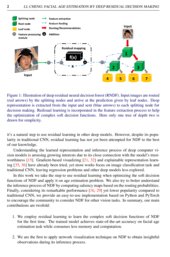 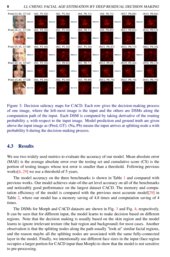 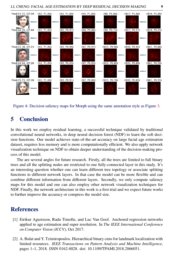 Facial age estimation is a task that aims to infer the chronological age from digital facial images, which is challenging due to large appearance variation and varying growing patterns in different life periods [survey]

. Divide-and-conquer is a strategy that solves a complex problem by dividing the problem space and tackle the sub-problems instead. This strategy is inherently used by traditional decision tree based models

In another parallel line of research, the architecture of deep convolutional neural networks (CNN) keeps evolving [VGG, resnet, densenet] to boost model performance on large-scale image classification problem. Among them residual learning [resnet] was an influential breakthrough by hypothesizing that learning residuals could ease the parameter optimization for very deep neural networks, which is now popularly adopted in CNN architectures [resdenoise, H_module]. Despite a rigorous mathematical analysis is still beyond our touch, a seminal work by Li et al [loss_ls]

In this work we take the step to use residual learning when optimizing the soft decision functions of NDF and apply it on age estimation problem. We also try to better understand the inference process of NDF by computing saliency maps based on the routing probabilities. Finally, considering its remarkable performance

yet lower popularity compared to traditional CNN, we provide an easy-to-use implementation based on Python and PyTorch to encourage the community to consider NDF for other vision tasks. In summary, our main contributions are twofold:

Divide-and-conquer for age estimation. To reduce the difficulty of facial age regression, past works tried to split the data space and learn multiple regressors [HumanPerform]

or use traditional random forests

Residual learning. After being proposed in [resnet], residual learning has been widely adopted in CNN to solve various problems [resdenoise, VQA, H_module]. Nevertheless, it has not yet been used for NDF, which is a another type of deep model different from traditional CNN.

Network visualizing and explainable AI.. Network visualization techniques [saliency, invert] have been used to understand the learned representation in CNN, yet not applied for NDF where a different type of inference is conducted via decision making. These works also focused on image classification and not on a regression problem like age estimation. Recent efforts tried to build explainable CNN model [interpret] and organize it by decision tree [inter_tree]. Our work is different from them since we do not add extra loss function in the training phase. Our previous extended abstract [li2019visualizing] was targeted for image classification, and here we extend it to facial age regression.

A deep neural decision forest (NDF) is an ensemble of deep neural decision trees. Each tree consists of splitting nodes and leaf nodes. In general each tree can have unconstrained topology but here we specify each tree as full binary tree for simplicity. We index the nodes sequentially with integer i as shown in Figure 1. A splitting node Si is associated with a recommendation (splitting) function Ri

that extracts deep features from the input

x and gives the recommendation score (routing probability) si=Ri(x) that the input is recommended (routed) to its left sub-tree. We denote the unique path from the root node to a leaf node Li a computation path Pi

pi that represents the "answer" given by it. To get the final prediction P, each leaf node contributes its prediction vector weighted by the probability of taking its computation path as

and Nl is the set of all leaf nodes. The weight can be obtained by multiplying all the recommendation scores given by the splitting nodes along the path. Assume the path Pi consists of a sequence of q splitting nodes and one leaf node as {Sj1i1,Sj2i2,…,Sjqiq,Li}, where the superscript for a splitting node denotes to which child node to route the input. Here jm=0 means the input is routed to the left child and jm=1 otherwise. Then the weight can be expressed as

, we use deep CNN to extract features from the input and assign each splitting node to one neuron of the last fully-connected layer, where sigmoid function is used to compute the final recommendation scores. Specifically,

and we call the NDF incorporated with residual learning as residual neural decision forest (RNDF).

For a regression problem where the dataset contains N labeled instances D={xi,yi}Ni=1, we directly use the squared loss function,

The network parameters are optimized by gradient descent keeping the leaf node prediction vectors fixed. For a splitting node Si, we denote nodes in its left and right sub-trees as node sets Sli and Sri, respectively. We denote the probability of recommending the input x to a leaf node Li as P(Li|x). The gradient of loss function with respect to the recommendation score ∂L(D)∂si is computed as,

where and . This gradient is back-propagated to the former layers to optimize layer parameter with gradient descent.

where the weighting factor ζj(pTj,ΣTj|yt) is computed as

The gradient descent and leaf node update rule are carried out alternately and the training process is depicted by Algorithm 1.

To understand how the input can influence the decision-making of this model, we take the gradient of the routing probability with respect to the input and name it decision saliency map (DSM),

The definition of DSM is inspired from the past gradient-based network visualization technique [saliency], but is unique since the past work focus on traditional CNN and image classification while here the saliency map is computed for NDF and age regression. NDF conducts inference by decision-making and saliency maps are more meaningful in this scenario. In experiment we trace one computation path for each input and compute DSMs for each splitting node on the path. Multiple paths are available for the same input since there are multiple leaf nodes and trees. We take the path that contributes most, i.e., the path whose weight wi is the largest.

. We use facial landmarks to locate the face region and eliminate in-plane face rotation. Only Morph dataset does not officially provide facial landmarks and we use OpenCV and Dlib for face detection and alignment. When the detector fails we manually crop and the face region. Finally we resize all images to 256 by 256 pixel and normalize the images based on computed mean and standard deviation of three color channels before feeding them to the model. The training data is augmented by random horizontal flipping with probability 0.5 and random cropping so that the final spatial size of the inputs is 224 by 224. For testing images we only conduct central cropping.

Model Architecture. The detailed model architecture is shown in Fig. 2, where a Resnet50-like [resnet] architecture is adopted and two fully-connected layers are used whose final outputs are activated by sigmoid function and sent to the forest to give the final prediction.

Hyper-parameter setting. For fair comparison with the previous work [DRFs], we only use a forest of 5 trees and each one is of depth 6. A batch size of 50 is used for back-propagation to train the network parameters and we did not notice significant performance discrepancy with a batch size range from 15 to 100. We update the leaf node prediction vectors after every 50 batches of network parameter update (Bn=50), where 500 samples are randomly drawn for each time. Each leaf node update will run 20 iterations of the update rule.

SGD optimizer is used with momentum set as 0.9 and the initial learning rate is 0.5. We train 40 epochs in every experiment for FG-NET, 100 epochs for Morph and 8 epochs for CACD. The learning rate is halved when model training gets stuck in plateau using the scheduler provided by PyTorch. Detailed settings can be found in our released code.

We use two widely used metrics to evaluate the accuracy of our model. Mean absolute error (MAE) is the average absolute error over the testing set and cumulative score (CS) is the portion of testing images whose test error is smaller than a threshold. Following previous works[OHRank, DRFs] we use a threshold of 5 years.

The model accuracy on the three benchmarks is shown in Table 1 and compared with previous works. Our model achieves state-of-the-art level accuracy on all of the benchmarks and noticeably good performance on the largest dataset CACD. The memory and computation efficiency of the model is compared with the previous most accurate model[DRFs] in Table 2, where our model has a memory saving of 4.8 times and computation saving of 4 times.

The DSMs for Morph and CACD datasets are shown in Fig. 3 and Fig. 4, respectively. It can be seen that for different input, the model learns to make decision based on different regions. Note that the decision making is usually based on the skin region and the model learns to ignore irrelevant texture (the hair region and background) for most cases. Another observation is that the splitting nodes along the path usually "look at" similar facial regions, and the reason maybe all the splitting nodes are associated with the same fully-connected layer in the model. Finally, we intentionally use different face sizes in the input (face region occupies a larger portion for CACD input than Morph) to show that the model is not sensitive to pre-processing.

The are several angles for future research. Firstly, all the trees are limited to full binary trees and all the splitting nodes are restricted to one fully-connected layer in this study. It’s an interesting question whether one can learn different tree topology or associate splitting functions to different network layers. In that case the model can be more flexible and can combine different information from different layers. Secondly, we only compute saliency maps for this model and one can also employ other network visualization techniques for NDF. Finally, the network architecture in this work is a first trial and we expect future works to further improve the accuracy or compress the model size.