Face hallucination is a domain-specific super-resolution (SR), that generates high-resolution (HR) facial images from the observed one/multiple low-resolution (LR) input/s. Recently, convolutional neural networks(CNNs) are successfully applied into face hallucination to model the complex nonlinear mapping between HR and LR images. Although global attention mechanism equipped into CNNs naturally focus on the facial structure information, it always ignore the local and cross feature structure information, resulting in limited reconstruction performance. In order to solve this problem, we propose global-local split-attention mechanism and design a Split-Attention in Split-Attention (SIS) network to enable local attention across feature-map groups attaining global attention and to improve the ability of feature representations. SIS can generate and focus the local attention of neural network on the interaction of face key structure information in channel-level, thereby improve the performance of face image reconstruction. Experimental results show that the proposed approach consistently and significantly improves the reconstruction performances for face hallucination. 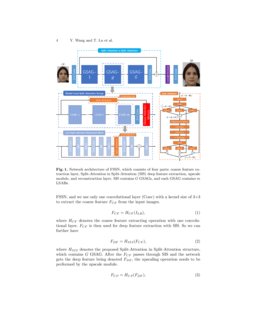 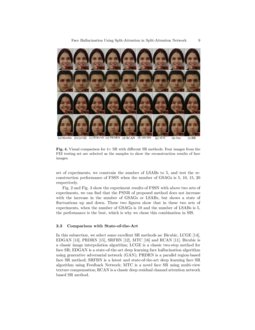 Face hallucination, also known as face super-resolution (SR), is a specific domain of super-resolution and is designed for facial image enhancement. In real-world surveillance scenarios, the far distance between imaging sensors and faces of interest often results in low-resolution (LR) face images. Using face hallucination for restoring high-resolution (HR) face images from LR ones is helpful for targeted person recognition. This method plays an important role in many applications, such as face detection, face recognition and analysis

[23], reconstruction- [2] and learning-based [17] approaches depending on the source of prior information as same as general image SR methods. The interpolation-based methods zoom the pixel size of images without generating pixels and calculate the value of the missing pixels by using mathematical formula on the basis of surrounding pixels. Reconstruction-based face hallucinations rely on multiple LR input images in fusing sub-pixel registration information. However, the efficiency and performance of interpolation- and reconstruction-based methods may degrade when the scale factor is overlarge. In the last decade, learning-based approaches are popular in face hallucination, because the learning-based method can fully utilize the prior information from training samples to map the LR images to HR ones, with pleasant visual results.

proposed Learning a Deep Convolutional Network for Image Super-Resolution (SRCNN) by firstly introducing a three-layer CNN for image SR. Since then, the reconstruction performance of SR has been advancing in the development of deep learning

The contributions of our work can be summarized as follows:

(i) We propose a novel global-local split-attention mechanism into the face hallucination using CNNs based methods to fuse different local attention, which can improve the interaction of cross-local attention to achieve global attention.

(ii) We propose a SIS network, which consists of several GSAGs, each GSAG contains several LSABs and a SSAC to generate different local attention and to enhance the cross-channel interaction of facial structures. The proposed SIS can improve the reconstruction performance of face hallucination.

In this section, we present the architecture of the proposed method, including the main backbone network and details for individual block.

In this subsection, we describe the network architecture of the proposed method in detail, which is dubbed as ”FSSN” in this paper. Fig. 1 shows the architecture of FSSN, which mainly consists four parts: coarse feature extraction, Split-Attention in Split-Attention (SIS) deep feature extraction, upscale module, and reconstruction part. Let’s denote ILR, ISR as the input and output of FSSN, and we use only one convolutional layer (Conv) with a kernel size of 3×3 to extract the coarse feature FCF from the input images.

where HSIS denotes the proposed Split-Attention in Split-Attention structure, which contains G GSAG. After the FCF passes through SIS and the network gets the deep feature being denoted FDF, the upscaling operation needs to be performed by the upscale module.

where HRecon and HFSSN denote the reconstruction layer and the function of our FSSN respectively.

Then FSSN is optimized with loss function. Several previous methods

denotes the parameter set of our network. The loss function is optimized by using stochastic gradient descent. More implementation details of training would be shown in Section 3.1.

Previous CNNs-based SR methods [16, 9, 20, 11] use large-scale residual blocks, which make the SR algorithm get better performance. But the limited receptive-field size and lacking of cross-channel interaction for previous versatile residual blocks also reduce the interaction of face structure information. At the same time, inspired by the success of Split-Attention in [21], we creatively propose the Local Split-Attention Mechanism Block (LSAB) to generate a local attention and to enhance the facial structure interaction in different channels. The detailed structure of LSAB and Split-Attention are shown in the Fig. 1, where the C, H and W are represented the input channel, height and width respectively.

In each Split-Attention, the input feature can be divided into r splits in channel-level, and the number of channels per split is Cr. Then these divided splits are fused via an element-wise summation across multiple splits, thereby realize the interaction of facial structure information in different channels.

where H1Sum denotes the first element-wise summation operation, Splitr1 denotes the rth split by the first division, and F1fusion denotes the output by H1Sum. The F1fusion is then passed through an adaptive average pooling layer, two 1×1 convolutional layers and a r−softmax function, and then divided into r splits again. Each of the current r splits is multiplied by each of the previous r splits using an element-wise product operation respectively, and finally use an element-wise summation to fuse these features as the output of Split-Attention denoting FSA. The FSA is formulated as:

We now describe the proposed SIS structure, which contains G GSAGs, and a long skip connection (LSC). Furthermore, each GSAG contains m LSABs with a short Split-Attention connection (SSAC). In this structure, we train a deep convolution network (over 200 layers) to gain better performance for face hallucination. The details structure of SIS is shown in the Fig. 1.

It has been demonstrated that residual blocks can be cascaded to achieve more than 1000-layer networks[3]. However, such a structure can lead to train difficulty and be unlikely to gain further performance improvement by cascading a very deep network. To solve this problem, Zhang et al. [22] proposed the RIR structure to attain much deeper networks of over 400 convolution layers. Inspired by RIR, we build our deep network SIS through stacking several GSAGs and one LSC. In each GSAG, on the basis of stacking several LSABs, a Split-Attention module is added to the traditional short skip connection (SSC), which is called SSAC. SIS enable local attention across feature-map groups and to improve the ability of feature representations, A GSAG in the gth group is formulated as:

We observe that simply stacking many GSAGs would fail to achieve better performance. To solve the problem, the LSC is further introduced in SIS to stabilize the training of very deep network. The function of SIS is formulated as:

SSAC makes the input features including facial structure information split and fused again at the channel-level to produce the different local attention.

In this paper, we use FEI [14] face dataset to prove the proposed algorithm. We use 350 images as the training dataset, 10 images as the validation dataset and 40 images as the testing dataset. The HR image size is 360×260 pixels, and the downsampling factor is 4, so that the LR image (using Bicubic Degradation Model) size is 90×65 pixels. It should be noted that all our training, validation and testing are based on luminance channel in the YCbCr color space, and upscaling factors: 4× is used for training and testing. The SR results are evaluated with three evaluation indexes: Peak Signal to Noise Ratio (PSNR), Structural Similarity (SSIM) [18] and Visual Information Fidelity (VIF) [12] to test SR reconstruction performance on luminance channel.

, and then decreases to half every 20 epoch. We use PyTorch to implement our models with a GTX 1080 GPU.

We set GSAG number as 10 in the SIS structure. In each GSAG, we set LSAB number as 5. Convolution layers in coarse feature extraction and SIS structure have channel=64 filters, except for that in the channel-downscaling.

In this subsection, we conduct the ablation studies on the FEI face testing dataset to demonstrate the most effective combination of GSAB and LSAB.

Table 1 lists the experimental results of different state-of-the-arts and proposed method on FEI testing set, it is obviously that FSSN is superior to these state-of-the-art algorithms on three different evaluation indicators, which proves the effectiveness of SIS. In terms of visual performance, Fig. 4 shows the face SR result of different methods in four representative samples. Columns (a) to (g) are the results from seven selected state-of-the-art algorithms, and Column (i) is the HR groundtruth as the benchmark. From the enlarged area, we can observe that some details of EDGAN using GAN network have sharper edges, but these edges are not correct for the groundtruth, so EDGAN is lower than our method in PSNR/SSIM/VIF. (b), (e) and (g) are the test results for LCGE, PRDRN and MTC respectively, we can find that a lot of texture information is lost in (b) and (e), and (g) has serious texture information distortion. The visual results of our model are shown in (h), intuitively, FSSN achieves the high visual performance.

In this paper, a novel face hallucination method is proposed, which uses global-local split-attention mechanism to enable local attention across feature-map groups and to improve the interaction of cross-local attention. The proposed SIS can generate and focus local attention on the face structure interaction in channel-level, thereby improve the performance of face image reconstruction. In the future, we believe that the proposed method can be easily applied to other image restoration problems, such as denoising, deblurring and general image SR.