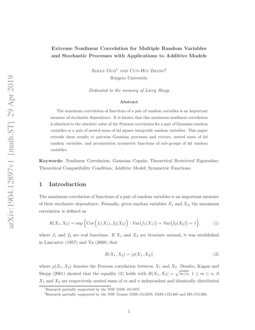 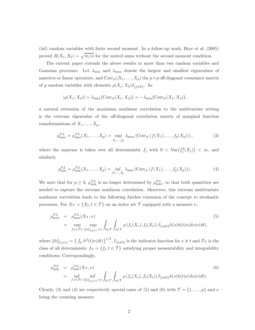 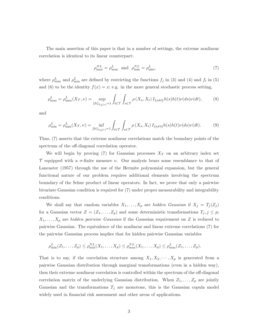 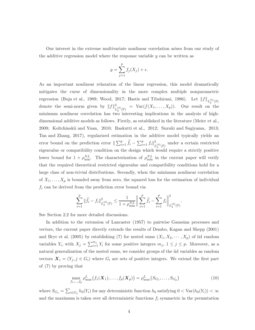 A Unified Approach to Construct Correlation Coefficient Between Random Variables

The current paper extends the above results to more than two random variables and Gaussian processes. Let λmin and λmax denote the largest and smallest eigenvalues of matrices or linear operators, and \rm Corr≠(X1,…,Xp) the p×p off-diagonal covariance matrix of p random variables with elements ρ(Xj,Xk)I{j≠k}. As

a natural extension of the maximum nonlinear correlation to the multivariate setting is the extreme eigenvalue of the off-diagonal correlation matrix of marginal function transformations of X1,…,Xp,

where the supreme is taken over all deterministic fj with 0<\rm Var(f2j(Xj))<∞, and similarly

We note that for p≥3, ρNLmin is no longer determined by ρNLmax, so that both quantities are needed to capture the extreme nonlinear correlation. Moreover, this extreme multivariate nonlinear correlation leads to the following further extension of the concept to stochastic processes: For XT={Xt,t∈T} on an index set T equipped with a measure ν,

where ∥h∥L2(ν)={∫Th2(t)ν(dt)}1/2, I{s≠t} is the indicator function for s≠t and FT is the class of all deterministic fT={ft,t∈T} satisfying proper measurability and integrability conditions; Correspondingly,

The main assertion of this paper is that in a number of settings, the extreme nonlinear correlation is identical to its linear counterpart:

where ρLmax and ρLmin are defined by restricting the functions fj in (3) and (4) and ft in (1) and (1) to be the identity f(x)=x; e.g. in the more general stochastic process setting,

Thus, (7) asserts that the extreme nonlinear correlations match the boundary points of the spectrum of the off-diagonal correlation operator.

We will begin by proving (7) for Gaussian processes XT on an arbitrary index set T equipped with a σ-finite measure ν. Our analysis bears some resemblance to that of Lancaster (1957) through the use of the Hermite polynomial expansion, but the general functional nature of our problem requires additional elements involving the spectrum boundary of the Schur product of linear operators. In fact, we prove that only a pairwise bivariate Gaussian condition is required for (7) under proper measurability and integrability conditions.

That is to say, if the correlation structure among X1,X2,⋯,Xp

Z1,…,Zp are jointly Gaussian and the transformations Tj are monotone, this is the Gaussian copula model widely used in financial risk assessment and other areas of applications.

y can be written as

As an important nonlinear relaxation of the linear regression, this model dramatically mitigates the curse of dimensionality in the more complex multiple nonparametric regression

, regularized estimation in the additive model typically yields an error bound on the prediction error

∥∑pi=1ˆfi−∑pi=1fi∥2L(0)2(P) under a certain restricted eigenvalue or compatibility condition on the design which would require a strictly positive lower bound for 1+ρNLmin. The characterization of ρNLmin in the current paper will verify that the required theoretical restricted eigenvalue and compatibility conditions hold for a large class of non-trivial distributions. Secondly, when the minimum nonlinear correlation of X1,…,Xp is bounded away from zero, the squared loss for the estimation of individual fi can be derived from the prediction error bound via

In addition to the extension of Lancaster (1957) to pairwise Gaussian processes and vectors, the current paper directly extends the results of Dembo, Kagan and Shepp (2001) and Bryc et al. (2005) by establishing (7) for nested sums (X1,X2,⋯,Xp) of iid random variables Yi, with Xj=∑mji=1Yi for some positive integers mj, 1≤j≤p. Moreover, as a natural generalization of the nested sums, we consider groups of the iid variables as random vectors Xi=(Yj,j∈Gi) where Gi are sets of positive integers. We extend the first part of (7) by proving that

under a mild condition, including the case where ∩pj=1Gj≠∅.

Paper Organization. The rest of the paper is organized as follows. In Section 2, we study the extreme nonlinear correlation for pairwise Gaussian random processes or vectors and discuss the implications to additive models; In Section 3, we study the extreme multivariate nonlinear correlation of nested sums and also the more general symmetric functions.

In Section 2.1, we characterize the extreme nonlinear correlations (1) and (1) for pairwise Gaussian processes, and discuss the implications of the result in the multivariate setting, including Gaussian copulas and the more general hidden pairwise Gaussian distributions. In Section 2.2, we discuss applications of the result in additive models, including justification of theoretical restricted eigenvalue and compatibility conditions and derivation of convergence rates for the estimation of individual component functions from prediction error bounds.

To start with, we shall explicitly specify the measurability and integrability conditions for the definition of the extreme linear and nonlinear correlations in (8), (9), (1) and (1).

We note that there is no loss of generality to assume that XT is standardized as (8) and (9) involve only the correlation between Xs and Xt. We also note that the extreme linear correlations in (8) and (9) are both finite if and only if the linear operator h→Kh=∫K(⋅,s)h(s)ν(ds) is bounded in L2(ν).

We first establish some equivalent expressions to (1) and (1) in the following lemma.

Let ρNLmax and ρNLmin be as in (1) and (1) with the function class FT specified in Assumption B. Then,

A proof of Lemma 1 can be found in the Appendix. The more explicit expressions established in the lemma would facilitate the Hermite expansion of the covariance in our analysis. Another ingredient of our analysis, stated in the following lemma, concerns the extreme eigenvalues of the Schur product of the off-diagonal correlation kernel.

Let ρLmax and ρLmin be as in (8) and (9) respectively. Under Assumption A,

Let XT={Xt}t∈T be a pairwise Gaussian process in the sense that (Xs,Xt) are bivariate Gaussian vectors for all pairs (s,t)∈T×T. Under Assumptions A and B,

As the normalized Hermite polynomials

Moreover, as the exchange of summation and integration is allowed as the above,

The proof is complete as inequalities in the other direction are trivial. ∎

We state in the rest of the subsection some corollaries as immediate consequences of Theorem 1 and Lemma 1.

Equivalently, the extreme nonlinear correlations in (1) and (1) with T=[0,1] and the Lebesgue measure ν(dx)=dx are given by

Let X1,X2,⋯,Xp be pairwise Gaussian random variables with a correlation matrix Σ∈Rp×p. Then, for all functions fj satisfying Efj(Xj)=0 and Ef2(Xj)<∞,

Equivalently, the extreme nonlinear correlations in (3) and (4) are given by

Finally, we state in the following corollary the implication of Theorem 1 on Gaussian copula and other hidden pairwise Gaussian variables: the extreme (nonlinear) correlations of such random variables are controlled by the spectrum limits of the off-diagonal covariance matrix of the underlying Gaussian distribution.

Suppose (X1,X2,⋯,Xp) follows a hidden Gaussian distribution in the sense of Xj=Tj(Zj) for a Gaussian vector (Z1,…,Zp)∼N(0,Σz) and some deterministic functions Tj with 0<\rm Var(Tj(Zj))<∞. Then,

Moreover, the Gaussian assumption on (Z1,…,Zp) can be weakened to pairwise Gaussian.

In high-dimensional additive regression models, the restricted eigenvalue and compatibility conditions are crucial elements of the theory of regularized estimation. These conditions are closely related to the extreme nonlinear correlation as we discuss here.

In the additive regression model, the relationship between the response variable Y and design variables X1,…,Xp is given by

where ε∼N(0,σ2) is the noise variable independent of {X1,…,Xp}. Let I={j:fj≠0} be the unknown index set of real signals and κ0 and ξ0 be positive constants, the theoretical restricted eigenvalue and compatibility conditions can be defined as

with the convention 0/0=0, with the left-hand side being the restricted eigenvalue for q=2 and J⊇I and compatibility coefficient for q=1 and J=I. The above definition generalizes both the restricted eigenvalue condition (Bickel et al., 2009) and the compatibility condition (van de Geer and Bühlmann, 2009) introduced in the high-dimensional regression.

Regarding the analysis of high-dimensional additive models, the condition (16) with q=2 has been used in Koltchinskii and Yuan (2010); Suzuki and Sugiyama (2013) as a key assumption. The condition (16) with q=1 and J=I has been used in Tan and Zhang (2017) to establish the prediction accuracy of the high-dimensional sparse additive models. Despite the importance of (16), it has been typically imposed as a condition but without verifying its validity other than in some very special cases such as the class of densities on [0,1]p uniformly bounded away from 0 and ∞. The result of the current paper on extreme multivariate nonlinear correlation will shed light on the restricted eigenvalue or theoretical compatibility condition for additive models, in the sense that the condition (16) is satisfied with κ0 being the minimum eigenvalue of the correlation matrix. Such a result is stated in the following corollary, as a consequence of combining Corollary 2 and Lemma 1.

Suppose (X1,X2,⋯,Xp) follows a hidden Gaussian distribution with Xj=Tj(Zj) for a pairwise Gaussian vector (Z1,…,Zp) with \rm Corr(Z1,…,Zp)=Σz and some deterministic functions Tj with 0<\rm Var(Tj(Zj))<∞. Then, the condition (16) holds with κ0=λmin(Σz). In particular, if λmin(Σz)>0 is a positive constant, then the theoretical restricted value condition (q=2,J⊇I) and compatibility condition (q=1,J=I) hold.

The above corollary implies that the condition (16) holds for the Gaussian copula model, where the variable Xj=Fj(Zj)∈[0,1] for 1≤j≤p is generated by the underlying pairwise Gaussian random variables (Z1,Z2,⋯,Zp) and {Fj}1≤j≤p

are the corresponding cumulative distribution function. To the best of the authors’ knowledge, this is a new connection of the theoretical restricted eigenvalue and compatibility conditions to the minimum eigenvalue of the correlation matrix.

In addition to verifying the important condition (16), we can also apply the minimum multivariate nonlinear correlation to connect the rate of convergence for estimating the individual components fj to the prediction error established in the literature (Meier et al., 2009; Koltchinskii and Yuan, 2010; Raskutti et al., 2012; Suzuki and Sugiyama, 2013; Tan and Zhang, 2017).

Under the same assumption as Corollary 5,

Here, non-degenerate means that the distribution of the random variable is not concentrated at a point. In the case of p=2, Dembo, Kagan and Shepp (2001) proved that the maximum correlation of Sm1 and Sm2 is equal to √m1/m2 if Y has finite second moment, and Bryc et al. (2005)

Yi. The following theorem extends their results from p=2 to general p. Further extensions to general symmetric functions of arbitrary groups of Yi are given in the next subsection.

where R=(Rj,k)p×p is the matrix with elements Rjk=I{j≠k}(mj∧mk)/√mjmk. If Y has a finite second moment, then R∈Rp×p is the off-diagonal correlation matrix of the nested sums Xj=Smj, 1≤j≤p, so that (7) holds with (X1,…,Xp),

It remains to prove that λmax(R) and λmin(R) are attainable by functions fj(Xj). This would be simple under the second moment condition on Y as we may simply set fj(Xj)=Xj. In the case of E[Y2]=∞, we prove that R is in the closure of the off-diagonal correlation matrices generated by (fj(Xj),j≤p). This will be done below by proving

Note that in our proof below, we need to take the limit in (20) along a subsequence of t→0+ to avoid P{sin(tY−ct)=0}=1 if the situation arises. This would always be feasible as P{sin(tY−ct)=0}=1 can be achieved only in a countable set of t.

This implies (20) with a=b=1, m=mj and n=mk, but the more general a and b would provide extension to sums of arbitrary subgroups of Yi later in Corollary 6.