We propose a MultiScale AutoEncoder(MSAE) based extreme image compression framework to offer visually pleasing reconstruction at a very low bitrate. Our method leverages the "priors" at different resolution scale to improve the compression efficiency, and also employs the generative adversarial network(GAN) with multiscale discriminators to perform the end-to-end trainable rate-distortion optimization. We compare the perceptual quality of our reconstructions with traditional compression algorithms using High-Efficiency Video Coding(HEVC) based Intra Profile and JPEG2000 on the public Cityscapes and ADE20K datasets, demonstrating the significant subjective quality improvement. 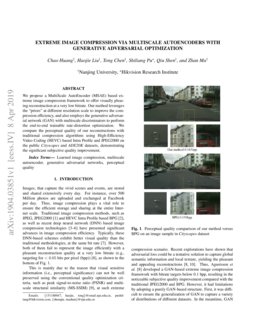 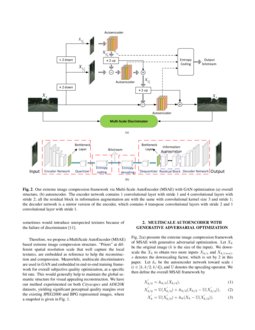 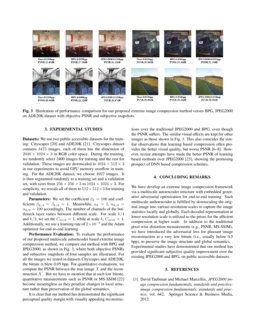 Images, that capture the vivid scenes and events, are stored and shared extensively every day. For instance, over 500 Million photos are uploaded and exchanged at Facebook per day. Thus, image compression plays a vital role to ensure the efficient storage and sharing at the entire Internet scale. Traditional image compression methods, such as JPEG, JPEG2000 [1] and HEVC Intra Profile based BPG [2]

[3, 4, 5, 6] have presented significant advances in image compression efficiency. Typically, these DNN-based schemes exhibit better visual quality than the traditional methodologies, at the same bit rate [7]. However, both of them fail to represent the image efficiently with a pleasant reconstruction quality at a very low bitrate (e.g., targeting for <0.05 bits per pixel (bpp)) [8], as shown in the bottom of Fig. 1.

This is mainly due to the reason that visual sensitive information (i.e., perceptual significance) can not be well preserved using the conventional quality optimization criteria, such as peak signal-to-noise ratio (PSNR) and multiscale structural similarity (MS-SSIM) [9], at such extreme compression scenario. Recent explorations have shown that adversarial loss could be a tentative solution to capture global semantic information and local texture, yielding the pleasant and appealing reconstructions [10, 8]. Thus, Agustsson et al. [8] developed a GAN-based extreme image compression framework with bitrate targets below 0.1 bpp, resulting in the noticeable subjective quality improvement compared with the traditional JPEG2000 and BPG. However, it had limitations by adopting a purely GAN-based structure. First, it was difficult to ensure the generalization of GAN to capture a variety of distributions of different datasets. In the meantime, GAN sometimes would introduce unexpected textures because of the failure of discriminator [11].

Therefore, we propose a MultiScale AutoEncoder (MSAE) based extreme image compression structure. “Priors” at different spatial resolution scale that well capture the local textures, are embedded as reference to help the reconstruction and compression. Meanwhile, multiscale discriminators are used in GAN and embedded in end-to-end training framework for overall subjective quality optimization, at a specific bit rate. This would generally help to maintain the global semantic structure for visual appealing reconstruction. We have our method experimented on both Cityscapes and ADE20K datasets, yielding significant perceptual quality margins over the existing JPEG2000 and BPG represented images, where a snapshot is given in Fig. 1.

Fig. 2 presents the extreme image compression framework of MSAE with generative adversarial optimization. Let Xk be the original image (k is the size of the input). We downscale the Xk to obtain two more inputs Xk/s and Xk/(s∗s). s denotes the downscaling factor, which is set by 2 in this paper. Let Ai be the autoencoder network toward scale i (i∈[k,k/2,k/4]), and U denotes the upscaling operator. We then define the overall MSAE framework by

Our proposed MSAE framework in (1), (2), and (3) has presented a coarse-to-fine reconstruction step by step. At the lowest scale k/4, the autoencoder Ak/4 only takes Xk/4 as an input to derive the reconstructed image X′k/4, yielding the coarsest representation of original Xk. Then X′k/4, as the prior, is upscaled and aggregated with residuals at each scale to derive the final X′k. Low resolution reconstructions are referred as “priors” to improve the overall rate-distortion performance. In addition, conditional GAN [12] is integrated into our MSAE system to do end-to-end training for visually appealing reconstruction, by enabling the multiscale discriminators for each input high-resolution images.

The same autoencoder is used in our MSAE framework at each scale. Except at the scale k/4 where the downscaled image Xk/4 serves as the input, residuals between upscaled priors and inputs (i.e., Xk/2−U(X′k/4) and Xk−U(X′k/2)) at the same resolution, are fed into the autoencoder for compression. Using residuals, instead of default textures, generally boost the coding efficiency at the same bitrate budget due to better energy compaction and redundancy exploit.

Such autoencoder, shown in Fig. 2, includes an encoder E to encode the input X to a set of feature maps (fMaps) ω. Then the ω is passed to the quantizer Q and will be quantized to a compressed representation ^ω=Q(E(X)). Specifically, the encoder E first compresses the input with size of W×H×C to feature maps with dimensions at W16×H16×480. Usually, W is for image width, H is the height and C is the number of color channels (e.g., C=3 for RGB color space). The fMaps are then projected down to W16×H16×Cneck at bottleneck layer prior to being quantized for ^ω. Note that Cneck varies at different scale.

The decoder, also the generator G tries to reconstruct the image X′=G(^ω) from the compressed representation ^ω. Within the decoder, nine residual blocks [13] based information augmentation module is aggregated to learn more information from the data to improve the reconstruction. Decoded fMaps will go through a mirror network of E to obtain final reconstruction with dimensions at the same dimension, i.e., W×H×C, as the input image.

Note that the autoencoder is optimized using PSNR or MS-SSIM in default, often resulting in compression artifacts such as blocking, blurring and contouring effects at a low bitrate. To address this problem, we adopt adversarial loss [10] in training to reconstruct image X′ with visually pleasant quality.

We adopt adversarial training in end-to-end optimization framework for extreme compression. This is mainly due to the reason that adversarial loss can address the blurring and contouring problems when the bitrates get to a low level [10]. In the proposed framework, the decoder or generator G is conditioned on the compressed representations and there is no necessity to add random noise for generator [12]. For discriminator D, we use the multiscale architecture following [14], which measures the divergence between real image and fake image generated by G

both globally and locally. Here we introduce a loss function that is closer to the perceptual similarity instead of relying on pixel-wise distortion

with Yk=D(Xk) and Y′k=D(X′k). ϕm,n represents the feature map generated by the n-th convolution (with stride 2) of the m-th scale for the multiscale discriminator. Wm,n and Hm,n are the dimensional size of the respective feature maps. For the coefficient λ, we set it as 10.

and the discriminator loss as:

In order to backpropagate through the non-differentiable quantizer

Q, we model the entropy rate following the [5] at bottleneck layer. We simply add uniform noise to ensure differentiability during the training and replace it with ROUND(⋅

) in inference. To make sure the approximated tensor values are good enough, the training phase must be used to balance the quality of the reconstruction with the bitrate by adding an entropy rate term to the training loss for optimal rate-distortion efficiency, i.e.,

As we can see, rate-distortion trade-offs are adjusted by setting the variations of αi and βi. Distortion, i.e., d(Xi,X′i), is measured by the PSNR in this study, and the entropy of compressed representation, i.e., H(^ωi), is used to approximate the encoding bitrate [5]. Such compound loss LRD is applied in a end-to-end trainable framework to achieve the optimal rate-distortion performance.

Datasets: We use two public accessible datasets for the training: Cityscapes [20] and ADE20K [21]. Cityscapes dataset contains 3475 images, each of them has the dimension of 2048×1024×3 in RGB color space. During the training, we randomly select 2400 images for training and the rest for validation. These images are downscaled to 1024×512×3 in our experiments to avoid GPU memory overflow in training. For the ADE20K dataset, we choose 4927 images. It is then segmented randomly to a training set and a validation set, with sizes from 256×256×3 to 1024×1024×3. For simplicity, we rescale all of them to 512×512×3 for training and validation.

Parameters: We set the coefficient βk=100 and coefficients βk/4=βk/2=1. Meanwhile, αk=1, αk/4=αk/2=100 accordingly. The number of channels of the bottleneck layer varies between different scale. For scale k/4 and k/2, we set the Cneck=1, while at scale k, Cneck=4. Additionally, we use a learning rate of 2×10−4 and the Adam optimizer for end-to-end learning.

Performance Evaluation: To evaluate the performance of our proposed multiscale autoencoder based extreme image compression method, we compare our method with BPG and JPEG2000, as shown in Fig. 3, where both objective PSNRs and subjective snapshots of four samples are illustrated. For all the images we tested in datasets Cityscapes and ADE20K, the bitrate is blew 0.05 bpp. For quantitative evaluations, we compute the PSNR between the true image X and the reconstruction X′. But we have to mention that at such low bitrate, quantitative measurements such as PSNR or MS-SSIM [22] become meaningless as they penalize changes in local structure rather than preservation of the global semantics.

It is clear that our method has demonstrated the significant perceptual quality margin with visually appealing reconstructions over the traditional JPEG2000 and BPG, even though the PSNR suffers. The similar visual effects are kept for other images as those shown in Fig. 3. This also coincides the similar observations that learning based compression often provides the better visual quality, but worse PSNR [7, 6, 8]. However, recent attempts have made the better PSNR of learning based methods over JPEG2000 [23], showing the promising prospect of DNN based compression schemes.

We have develop an extreme image compression framework via a multiscale autoencoder structure with embedded generative adversarial optimization for end-to-end training. Such multiscale authoencoder is fulfilled by downscaling the original image into various resolution scales to capture the image statistics locally and globally. Each decoded representation at lower resolution scale is utilized as the priors for the efficient compression at higher scale. In addition to the traditional pixel-wise distortion measurements (e.g., PSNR, MS-SSIM), we have introduced the adversarial loss for pleasant image reconstruction at a very low bitrate (i.e., usually below 0.5 bpp), to preserve the image structure and global semantics, . Experimental studies have demonstrated that our method has provided significant subjective quality improvement over the existing JPEG2000 and BPG, on public accessible datasets.