Effective and efficient forecasting relies on identification of the relevant information contained in past observations – the predictive features – and isolating it from the rest. When the future of a process bears a strong dependence on its behaviour far into the past, there are many such features to store, necessitating complex models with extensive memories. Here, we highlight a family of stochastic processes whose minimal classical models must devote unboundedly many bits to tracking the past. For this family, we identify quantum models of equal accuracy that can store all relevant information within a single two-dimensional quantum system (qubit). This represents the ultimate limit of quantum compression and highlights an immense practical advantage of quantum technologies for the forecasting and simulation of complex systems. 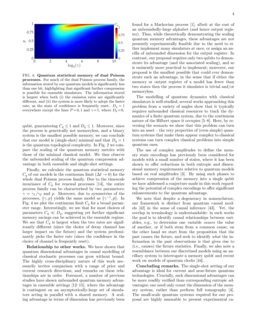 Among the predictive hidden Markov models that describe a given stochast...
Samuel Loomis, et al. ∙

Central to the success of adaptive systems is their ability to interpret...
Thomas J. Elliott, et al. ∙

Truncated dual Poisson processes. As noted above, Dμ remains infinite at any level of discretisation, as there is no maximum ←n that the processes cannot exceed, and no merging of different ←n into the same causal state. However, keeping this infinite overhead of states provides very little additional predictive power at large ←nΔt, as the probability of the process reaching these states is small, and the difference in conditional probabilities between ←n=n and ←n=n+1 is monotonically decreasing towards zero with increasing n. We therefore introduce a truncated form of the process, where there is a designated ‘terminal’ state at nterm, such that all states at ←n=n>nterm are merged down into this state. This terminal state must have transition probabilities that are a weighted average of all the merged states; when an event happens the model transitions to ←n=0 as before, but now on non-events the system remains in the n=nterm state, as opposed to advancing further.

There is a level of subjective choice in how nterm is selected. Appropriate methods can be for example based on the fidelity of the conditional distributions at larger ←n, or on the probabilities of reaching such states. For concreteness, we pick a straightforward criterion:

Quantum model construction. As described in the main text, a unitary U and set of quantum memory states {|ς(n)⟩} that satisfy Eq. (Extreme dimensional compression with quantum modelling) form a quantum causal model of the dual Poisson process at a particular set of parameters. Here we show that the memory states given by Eq. (4) form such a set of states, and give the corresponding U. This will prove our main result.

We begin by postulating a unitary operator U that is stipulated to act in the following manner on two (non-orthogonal) states {|ϕ1⟩,|ϕ2⟩} that we refer to as ‘generator’ states:

with j∈{1,2}, and we refer to |ϕR⟩:=√p|ϕ1⟩+i√¯p|ϕ2⟩ as the ‘reset’ state. We define the overlap of the two generator states g:=⟨ϕ1|ϕ2⟩, noting that it depends on the size of the timesteps Δt. Without loss of generality, we can enforce that this quantity be both real and positive. Analogous to current systematic approaches for constructing quantum causal models Binder et al. (2018); Liu et al. (2019) we utilise the relation ⟨ϕ1|ϕ2⟩=⟨ϕ1|⟨0|U†U|ϕ2⟩|0⟩, which arises from the properties of unitary operators. From this, we obtain

Armed with this, we can now express the generator states in the computational basis of a qubit {|0⟩,|1⟩}. Without loss of generality, we can assign

We see that after emitting a 1, the memory always transitions to the reset state |ϕR⟩; it defines the ←n=0 state to which the memory returns after the occurence of an event. This thus corresponds to the memory state |ς(0)⟩. The remaining |ς(n)⟩ can be obtained by applying the unitary to the reset state n times and post-selecting on the probe being measured as |0⟩ after each application: |ς(n)⟩∝(Π0U)n|ϕR⟩|0⟩, where Π0=|0⟩⟨0| is the projector onto the non-event subspace of the probe. Accounting for normalisation, we obtain

The remaining two columns describing the action U|0⟩|1⟩ and U|1⟩|1⟩ are not uniquely defined by the model, and remain a free choice provided the unitarity of U is upheld. We can also construct a pair of Kraus operators {E0,E1} that describe the effective evolution of the memory conditional on the observed output and may be used to update the memory when tracking an external system that behaves according to the process. These operators are defined according to Ej=⟨j|U|0⟩, where the states in this expression belong to the probe subspace Nielsen and Chuang (2000); they can be readily obtained from Eqs. (Technical Appendix) and (Technical Appendix).

Finally, we verify that this model produces the correct survival probability for the process Eq. (1). This is found from the probability of recovering a contiguous string of n 0s after starting from the reset state:

Thus, our construction faithfully replicates the process, and may be used to track the dynamics of any dual Poisson process, at any level of discretisation, thus proving our main result. Notably, our quantum models are free from the need to introduce a truncation at long times as was done in the classical case.

As would be expected, the quantum memory states Eq. (9) and U Eqs. (Technical Appendix) and (Technical Appendix) depend on the particular parameters defining the specific dual Poisson process to be modelled. Nevertheless, once initialised in a particular memory state |ς(n)⟩ corresponding to our observed past (which, being a qubit state, can always be prepared with at most three rotations from {Ry,Rz} – corresponding to rotations of a qubit around the y and z axis of the Bloch sphere Vatan and Williams (2004)), the model operates by repeated applications of the same unitary U, each followed by measurement and reset of the ancilla to simulate the future statistics. Being a two-qubit unitary, U can always be synthesised by at most fifteen rotations from {Ry,Rz} and three CNOT gates Kraus and Cirac (2001); Vatan and Williams (2004), irrespective of the parameters.

, we can naively estimate their fidelity in implementing

U as being at least 99.5% when multiplying the fidelity in implementing the elementary gates (i.e., 0.9993×0.999915). This estimate is likely too pessimistic, as it neglects that some single qubit gates are applied in parallel to different qubits, and that the errors can act in opposing directions to partially cancel each other out. Nevertheless, we can use this as a back-of-the-envelope benchmark for implementability. Using the parameters of Fig. 2 (γ1=12,γ2=1,p=0.9) with log2(1/Δt)=4, from Eqs. (Technical Appendix) and (Technical Appendix) we obtain

indicates a ’free’ value to be chosen subject to the constraint that the columns form mutually orthogonal vectors. By inspection, we can see that any implementation of this with at least 99.5% fidelity must capture the salient features to a high degree of accuracy. At this value of

Δt the quantum scaling advantage is already clearly visible, and so is practical to verify with current ion trap experiments.

Calculating statistical complexity and quantum statistical memory. Prior work on the computational mechanics of renewal processes Marzen and Crutchfield (2015) has established that the steady-state probabilities of the causal states are proportional to their survival probabilities. That is, P(←n)=μΦ(←n), where μ−1:=∑∞n=0Φ(n). For dual Poisson processes,

which may be straightforwardly diagonalised to find the two eigenvalues