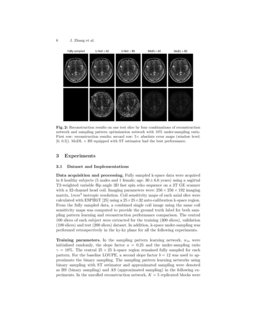 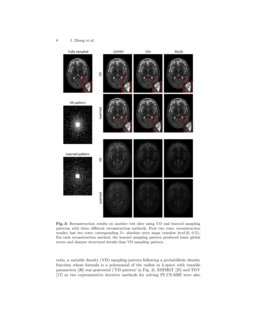 Learning-based Optimization of the Under-sampling Pattern in MRI

Deep Simultaneous Optimisation of Sampling and Reconstruction for Multi-contrast MRI

One Network to Solve Them All: A Sequential Multi-Task Joint Learning Network Framework for MR Imaging Pipeline

A multi-scale approach to the inverse reconstruction of a pattern's micr...
R. Piasecki, et al. ∙

Parallel imaging (PI) [11, 22] and Compressed Sensing MRI (CS-MRI) [19] are widely used technique for acquiring and reconstructing under-sampled k-space data thereby shortening scanning times in MRI. CS-MRI is a computational technique that suppresses incoherent noise-like artifacts introduced by random under-sampling, often via a regularized regression strategy. Combining CS-MRI with PI promises to make MRI much more accessible and affordable. Therefore, this has been an intense area of research in the past decade [9, 20, 28]

. One major task in PI CS-MRI is designing a random under-sampling pattern, conventionally controlled by a variable-density probabilistic density function (PDF). However, the design of the ‘optimal’ under-sampling pattern remains an open problem for which heuristic solutions have been proposed. For example,

[18] generated the sampling pattern based on the power spectrum of an existing reference dataset; [12] combined experimental design with the constrained Cramer-Rao bound to generate the context-specific sampling pattern; [10] designed a parameter-free greedy pattern selection method to find a sampling pattern that performed well on average for the MRI data in a training set.

Recently, with the success of learning based k-space reconstruction methods [1, 13, 24, 30]

as the under-sampled image reconstruction network were trained together in LOUPE to optimize both the k-space under-sampling pattern and reconstruction process. In the sampling pattern optimization network, one sigmoid operation was used to map the learnable weights into probability values, and a second sigmoid operation was used to approximate the non-differentiable step function for stochastic sampling, as the gradient needed to be back-propagated through such layer to update the learnable weights. After training, both optimal sampling pattern and reconstruction network were obtained. For a detailed description of LOUPE we refer the reader to

In this work, we extended LOUPE in three ways. Firstly, in-house multi-coil in-vivo fully sampled T2-weighted k-space data from MR scanner was used to learn the optimal sampling pattern and reconstruction network. Secondly, modified U-Net [23] as the reconstruction network in LOUPE was extended to a modified unrolled reconstruction network with learned regularization term in order to reconstruct multi-coil data in PI with proper data consistency and reduce the dependency on training data when training cases were scarce. Thirdly, approximate stochastic sampling layer was replaced by a binary stochastic sampling layer with Straight-Through (ST) estimator [3], which was used to avoid zero gradients when back-propagating to this layer. Fully sampled data was acquired in healthy subjects. Under-sampled data was generated by retrospective under-sampling using various sampling patterns. Reconstructions were performed using different methods and compared.

In PI CS-MRI, given an under-sampling pattern and the corresponding acquired k-space data, a reconstructed image ^x is obtained via minimizing the following objective function:

where x the MR image to reconstruct, Sj the coil sensitivity map of j-th coil, Nc the number of receiver coils, F

U the k-space under-sampling pattern, and bj the acquired under-sampled k-space data of the j-th coil. R(x) is a regularization term, such as Total Variation (TV) [21] or wavelet [8]. The minimization in Eq. 1 is performed using iterative solvers, such as the Quasi-Newton method [7], the alternating direction method of multipliers (ADMM) [4] or the primal-dual method [5]. Eq. 1 can also be mimicked by learning a parameterized mapping such as neural network from input {bj} to output ^x. We denote the mapping {bj}→^x using either iterative solvers or deep neural networks as ^x=A({bj}).

the loss function to measure the similarity between reconstructed image

^xi(U) and fully sampled label x∗i, Ω the constraint set of U to define how U is generated with a fixed under-sampling ratio γ. The bilevel optimization problem [6] of Eq. (2) was solved in LOUPE [2] via jointly optimizing a modified U-Net [23] as A and an approximate stochastic sampling process as Ω on a large volume of simulated k-space data from magnitude MR images. However, for in-vivo k-space data with multi-coil acquisition as in PI, both U-Net architecture for reconstruction and approximate stochastic sampling for pattern generation could be sub-optimal. Specifically, due to limited training size of in-vivo data and no k-space consistency imposed in U-Net, inferior reconstructions could happen in test and even training datasets. And the approximate stochastic sampling process generated fractional rather than 0-1 binary patterns during training, which might not work well during test as binary patterns should be used for realistic k-space sampling. In view of the above, we extend and improve LOUPE in terms of both reconstruction mapping A and sampling pattern’s generating process Ω when working on in-vivo multi-coil k-space data in this work.

To reduce the dependency on training dataset and improve the data consistency of deep learning reconstructed images, combining neural network block for the regularization term in Eq.

1 with iterative optimization scheme to solve Eq. 1 has been explored in recent years [1, 13, 24], which are called ”unrolled optimization/reconstruction networks” in general. Prior works showed that such unrolled networks performed well for multi-coil k-space reconstruction task by means of inserting measured k-space data into the network architecture to solve Eq. 1 with a learning-based regularization. In light of the success of such unrolled reconstruction networks, we apply a modified MoDL [1] as the reconstruction network in this work. MoDL unrolled the quasi-Newton optimization scheme to solve Eq. 1 with a neural network based denoiser as the L2 regularization term R(x), and conjugate gradient (CG) descent block was applied in MoDL architecture to solve L2 regularized problem. Besides, we will show that such unrolled network architecture also works as the skip connections for sampling pattern weights’ updating as the generated pattern is connected to each intermediate CG block to perform L2 regularized data consistency (Fig. 1).

In LOUPE [2], a probabilistic pattern Pm was defined as Pm=11+e−a⋅wm with hyper-parameter a and trainable weights wm. The binary k-space sampling pattern U

Ber(Pm) independently on each k-space location. U was generated from Pm as U=1z<Pm, where z∼U[0,1]dim(Pm) and 1x the pointwise indicator function on the truth values of x. However, indicator function 1x has zero gradient almost everywhere when back-propagating through it. LOUPE addressed this issue by approximating 1z<Pm

Although the gradient issue was solved in LOUPE, U was approximated as a fraction between [0,1]

on each k-space location instead of the binary pattern deployed in both test phase and realistic MR scan. As a result, binary sampling patterns generated in test phase could yield inferior performance due to such mismatch with training phase. To address this issue, binary patterns are also needed during training phase, at the same time gradient back-propagating through binary sampling layer should be properly handled. Such binary pattern generation layer can be regarded as the layer with stochastic neurons in deep learning, and several methods have been proposed to address its back-propagation

[3, 15]. Here we use straight through (ST) estimator [3] in the stochastic sampling layer to generate binary pattern U meanwhile addressing the zero gradient issue during back-propagation. Based on one variant of ST estimator, U is set as 1z<Pm during forward pass. When back-propagating through the stochastic sampling layer, an ST estimator replaces the derivative factor d1z<Pmdwm=0 with the following:

In other words, indicator function in the stochastic layer is applied at forward pass but treated as identity function during back-propagation. This ST estimator allows the network to make a yes/no decision, allowing it to picking up the top γ fraction of k-space locations most important for our task.

In the sampling pattern learning network (Fig. 1(b)), Renormalize(⋅) is a linear scaling operation to make sure the mean value of probabilistic pattern is equal to the desired under-sampling ratio γ. The binary pattern U is sampled at every forward pass in the network and once generated, it is used to retrospectively under-sample the fully sampled multi-coil k-space data.

The deep quasi-Newton network (MoDL [1]) as the unrolled reconstruction network architecture is illustrated in Fig. 1(a). In deep quasi-Newton, Denoiser + Data consistency blocks are replicated K times to mimic K quasi-Newton outer loops of solving Eq. 1 in which a neural network denoiser for R(x) is applied. Five convolutional layers with skip connection [14] and instance normalization [27] are used as the denoiser and the weights are shared among blocks. The binary pattern U is used to generate zero-filled reconstruction x0 as the input of reconstruction network and also connected to all the data consistency sub-blocks to deploy regularized optimization, which also works as the skip connection to benefit the training of pattern weights wm.

Training parameters. In the sampling pattern learning network, wm were initialized randomly, the slope factor a=0.25 and the under-sampling ratio γ=10%. The central 25×25 k-space region remained fully sampled for each pattern. For the baseline LOUPE, a second slope factor b=12 was used to approximate the binary sampling. The sampling pattern learning networks using binary sampling with ST estimator and approximated sampling were denoted as BS (binary sampling) and AS (approximated sampling) in the following experiments. In the unrolled reconstruction network, K=5 replicated blocks were applied and the denoiser was initialized randomly. For the baseline LOUPE, a residual U-Net was applied. All of the learnable parameters in Fig. 1 were trained simultaneously using the loss function: 1NΣNi=1ΣKk=1∥xki−x∗i∥1, where x∗i the i-th ground truth label in the training dataset, xki the k-th intermediate reconstruction (K=1 in U-Net). Stochastic optimization with batch size 1 and Adam optimizer (initial learning rate: 10−3) [16]

was used to minimize the loss function. The number of epochs was

. The whole training and inference procedures were implemented in PyTorch with Python version 3.7.3 on an RTX 2080Ti GPU.

3.3 Comparison with other pattern