Let Xh be the collection of all h-subsets of an n-set X⊇ Y. Given a coloring (partition) of a set S⊆Xh, we are interested in finding conditions under which this coloring is extendible to a coloring of Xh so that the number of times each element of X appears in each color class (all sets of the same color) is the same number r. The case S=∅, r=1 was studied by Sylvester in the 18th century, and remained open until the 1970s. The case h=2,r=1 is extensively studied in the literature and is closely related to completing partial symmetric Latin squares. For S=Yh, we settle the cases h=4, |X|≥ 4.847323|Y|, and h=5, |X|≥ 6.285214|Y| completely. Moreover, we make partial progress toward solving the case where S=Xh\Yh. These results can be seen as extensions of the famous Baranyai's theorem, and make progress toward settling a 40-year-old problem posed by Cameron. 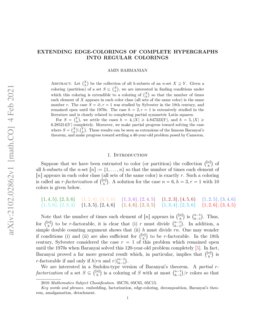 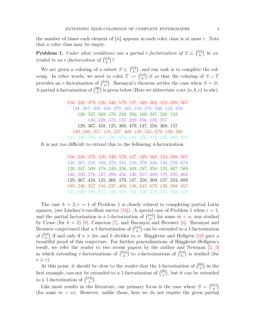 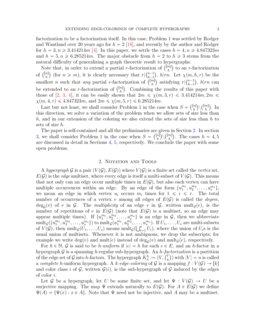 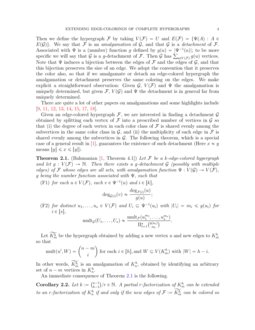 Effects of Some Operations on Domination Chromatic Number in Graphs

For a simple graph G, a domination coloring of G is a proper vertex colo...
Yangyang Zhou, et al. ∙

The Complexity of Finding Fair Independent Sets in Cycles

This paper introduces a general methodology, based on abstraction and sy...
Michael Codish, et al. ∙

Suppose that we have been entrusted to color (or partition) the collection ([n]h) of all h-subsets of the n-set [n]:={1,…,n} so that the number of times each element of [n] appears in each color class (all sets of the same color) is exactly r. Such a coloring is called an r-factorization of ([n]h). A solution for the case n=6,h=3,r=1 with 10 colors is given below.

Note that the number of times each element of [n] appears in ([n]h) is (n−1h−1). Thus, for ([n]h) to be r-factorable, it is clear that (i) r must divide (n−1h−1). In addition, a simple double counting argument shows that (ii) h must divide rn. One may wonder if conditions (i) and (ii) are also sufficient for ([n]h) to be r-factorable. In the 18th century, Sylvester considered the case r=1 of this problem which remained open until the 1970s when Baranyai solved this 120-year-old problem completely [5]. In fact, Baranyai proved a far more general result which, in particular, implies that ([n]h) is r-factorable if and only if h|rn and r|(n−1h−1).

We are interested in a Sudoku-type version of Baranyai’s theorem. A partial r-factorization of a set S⊆([n]h) is a coloring of S with at most (n−1h−1)/r colors so that the number of times each element of [n] appears in each color class is at most r. Note that a color class may be empty.

It is not too difficult to extend this to the following 4-factorization.

Like most results in the literature, our primary focus is the case where S=([m]h) (for some m<n). However, unlike those, here we do not require the given partial factorization to be a factorization itself. In this case, Problem 1 was settled by Rodger and Wantland over 20 years ago for h=2 [18], and recently by the author and Rodger for h=3,n≥3.414214m [4]. In this paper, we settle the cases h=4,n≥4.847323m and h=5,n≥6.285214m. The major obstacle from h=2 to h≥3 stems from the natural difficulty of generalizing a graph theoretic result to hypergraphs.

The paper is self-contained and all the preliminaries are given in Section 2. In section 3, we shall consider Problem 1 in the case when S=([n]h)∖([m]h). The cases h=4,5 are discussed in detail in Sections 4, 5, respectively. We conclude the paper with some open problems.

A hypergraph G is a pair (V(G),E(G)) where V(G) is a finite set called the vertex set, E(G) is the edge multiset, where every edge is itself a multi-subset of V(G). This means that not only can an edge occur multiple times in E(G), but also each vertex can have multiple occurrences within an edge. By an edge of the form {um11,um22,…,umss}, we mean an edge in which vertex ui occurs mi times for 1≤i≤r. The total number of occurrences of a vertex v among all edges of E(G) is called the degree, degG(v) of v in G. The multiplicity of an edge e in G, written multG(e), is the number of repetitions of e in E(G) (note that E(G) is a multiset, so an edge may appear multiple times). If {um11,um22,…,umss} is an edge in G, then we abbreviate multG({um11,um22,…,umss}) to multG(um11,um22,…,umss). If U1,…,Us are multi-subsets of V(G), then multG(U1,…,Us) means multG(⋃si=1Ui), where the union of Uis is the usual union of multisets. Whenever it is not ambiguous, we drop the subscripts; for example we write deg(v) and mult(e) instead of degG(v) and multG(e), respectively.

For h∈N, G is said to be h-uniform if |e|=h for each e∈E, and an h-factor in a hypergraph G is a spanning h-regular sub-hypergraph. An h-factorization is a partition of the edge set of G into h-factors. The hypergraph Khn:=(V,(Vh)) with |V|=n is called a complete h-uniform hypergraph. A k-edge-coloring of G is a mapping f:V(G)→[k] and color class i of G, written G(i), is the sub-hypergraph of G induced by the edges of color i.

Let G be a hypergraph, let U be some finite set, and let Ψ:V(G)→U be a surjective mapping. The map Ψ extends naturally to E(G). For A∈E(G) we define Ψ(A)={Ψ(x):x∈A}. Note that Ψ need not be injective, and A may be a multiset. Then we define the hypergraph F by taking V(F)=U and E(F)={Ψ(A):A∈E(G)}. We say that F is an amalgamation of G, and that G is a detachment of F. Associated with Ψ is a (number) function g defined by g(u)=|Ψ−1(u)|; to be more specific we will say that G is a g-detachment of F. Then G has ∑u∈V(F)g(u) vertices. Note that Ψ induces a bijection between the edges of F and the edges of G, and that this bijection preserves the size of an edge. We adopt the convention that it preserves the color also, so that if we amalgamate or detach an edge-colored hypergraph the amalgamation or detachment preserves the same coloring on the edges. We make explicit a straightforward observation: Given G, V(F) and Ψ the amalgamation is uniquely determined, but given F, V(G) and Ψ the detachment is in general far from uniquely determined.

Given an edge-colored hypergraph F, we are interested in finding a detachment G obtained by splitting each vertex of F into a prescribed number of vertices in G so that (i) the degree of each vertex in each color class of F is shared evenly among the subvertices in the same color class in G, and (ii) the multiplicity of each edge in F is shared evenly among the subvertices in G. The following theorem, which is a special case of a general result in [1], guarantees the existence of such detachment (Here x≈y means ⌊y⌋≤x≤⌈y⌉).

(Bahmanian [1, Theorem 4.1]) Let F be a k-edge-colored hypergraph and let g:V(F)→N. Then there exists a g-detachment G (possibly with multiple edges) of F whose edges are all sets, with amalgamation function Ψ:V(G)→V(F), g being the number function associated with Ψ, such that

In other words, ˜Khm is an amalgamation of Khn, obtained by identifying an arbitrary set of n−m vertices in Khn.

An immediate consequence of Theorem 2.1 is the following.

The following observation will be quite useful throughout the paper.

In order to avoid trivial cases, throughout the rest of this paper we assume that m>h.

Let V be an arbitrary subset of vertices in Khn with |V|=m≤n. Then Khn−V≅⋃h−1i=0(mi)Kh−in−m. A partial r-factorization of H:=Khn−V is a coloring of the edges of Khn−V with at most (n−1h−1)/r colors so that for each color i, degH(i)(v)≤r for each vertex of H (Note that H has singleton edges). In the next result, we completely settle the problem of extending a partial r-factorization of Khn−V to an r-factorization of Khn. Note that here we are not only extending the coloring, but also the edges of size less than h to edges of size h. The case h=3 was solved in [4].

To prove the necessity, suppose that a given partial r-factorization of H is extended to an r-factorization of Khn. For Khn to be r-factorable, the two divisibility conditions are clearly necessary. By extending an edge e of size i (i<h) in H to an edge of size h in Khn, the color of e does not change, and so (4) is necessary. Since the number of edges in each color class of Khn is exactly rn/h, the necessity of (5) is implied.

Now we show that all edges of the type uh will be colored, or equivalently that, ∑ki=1multi(uh,.)=(mh).

For a hypergraph G and V⊆V(G), let G∖V be the hypergraph whose vertex set is V(G) and whose edge set is {e∈E(G)|e⊈V}.

It remains an open question whether these conditions are sufficient. Here we prove a weaker result.

By eliminating all the vertices in V, and shrinking the edges containing vertices in V, we obtain Khn−V. The rest of the proof follows from Theorem 3.1. ∎

For the necessary conditions, see the previous section. To prove the sufficiency, we need to show that the edges of F:=˜K4m can be colored with k:=(n−13)/r colors so that (6) is satisfied.

Since for each x∈V,

we can color all the edges of the form {w,u3} where w∈V so that for each x∈V, there are r−degi(x) edges of this type colored i incident with x for each i∈[k]. Note that after this coloring,

For i∈[k], let ai,bi,ci,di be the number of edges colored i of the form W,W∪{u},W∪{u2},W∪{u3} where W⊆V, respectively. We color the edges of the form {u4} so that there are exactly

Combining this with (7) implies that (<a class="l