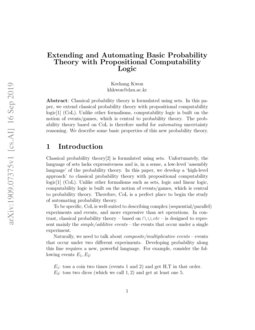 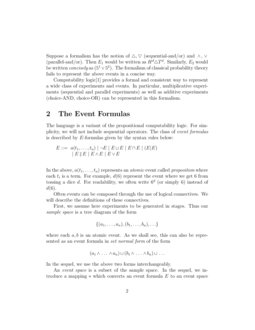 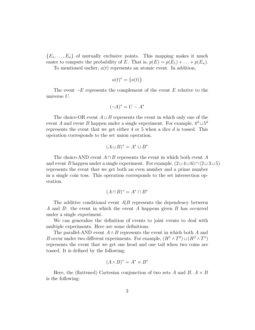 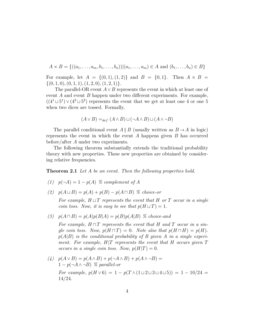 To be specific, CoL is well-suited to describing complex (sequential/parallel) experiments and events, and more expressive than set operations. In contrast, classical probability theory – based on ∩,∪,etc – is designed to represent mainly the simple/additive events – the events that occur under a single experiment.

Naturally, we need to talk about composite/multiplicative events – events that occur under two different experiments. Developing probability along this line requires a new, powerful language. For example, consider the following events E1,E2:

Computability logic[1] provides a formal and consistent way to represent a wide class of experiments and events. In particular, multiplicative experiments (sequential and parallel experiments) as well as additive experiments (choice-AND, choice-OR) can be represented in this formalism.

The language is a variant of the propositional computability logic. For simplicity, we will not include sequential operators. The class of event formulas is described by E-formulas given by the syntax rules below: E::= a(t1,…,tn)|\small¬E|E\small⊔E|E\small⊓E|(E|E) |E\small∥E|E\small% ∧E|E\small∨E In the above, a(t1,…,tn) represents an atomic event called proposition where each ti is a term. For example, d(6) represent the event where we get 6 from tossing a dice d. For readability, we often write 6d (or simply 6) instead of d(6).

Often events can be composed through the use of logical connectives. We will describe the definitions of these connectives.

First, we assume here experiments to be generated in stages. Thus our sample space is a tree diagram of the form

where each a,b is an atomic event. As we shall see, this can also be represented as an event formula in set normal form of the form

In the sequel, we use the above two forms interchangeably.

An event space is a subset of the sample space. In the sequel, we introduce a mapping ∗ which converts an event formula E to an event space {E1,…,En} of mutually exclusive points. This mapping makes it much easier to compute the probability of E. That is, p(E)=p(E1)+…+p(En).

To mentioned earlier, a(t) represents an atomic event. In addition,

The event \small¬E represents the complement of the event E relative to the universe U.

The additive conditional event A|B represents the dependency between A and B: the event in which the event A happens given B has occurred under a single experiment.

We can generalize the definition of events to joint events to deal with multiple experiments. Here are some definitions.

Here, the (flattened) Cartesian conjunction of two sets A and B, A×B is the following:

The parallel conditional event A\small∥B (usually written as B\small→A in logic) represents the event in which the event A happens given B has occurred before/after A under two experiments.

Let A be an event. Then the following properties hold.

In the above, we list some properties of our probability theory. In addition, we sometimes need to deal with sharing experiments among two experiments. Sharing experiments represents experiments which have been completed. Mathematical facts such as prime(2),odd(3) are such examples.

For this reason, we need to include the following:

For example, let A be a (uncertain) statement that there are aliens in Vega. Then it is easy to see that these rules hold, as every occurrence of A represents the same event here.

Let us consider the following event E where E = roll a dice and get 4 or 5. The probabilities of E and E\small∨E is the following:

As another example, represents the event that at least one head comes up when two coins are tossed. Now, it is easy to see that = 3/4.

As the last example, suppose two dice are tossed and we get 6 from one dice. What is the probability that we get 5 from another dice? This kind of problem is very cumbersome to represent/ solve in classical probability theory. Fortunately, it can be represented/solved from the above formula in a concise way. It is shown below:

% computing the following probability requires converting the event to its event space.

% computing the following does not require converting the event to its event space.

From these two, we obtain the following in a purely algorithmic way:

4 Two Versions of the Bayes’ Rule

In this section, we raise questions related to the interpretation of ∩ in the Bayes rule. Most textbooks interpret ∩ in an ambiguous, confusing way: sometimes as \small⊓, and as \small∧ in others. This is problematic, especially in automating probabilistic inference.

In considering automation of probability, it is very problematic/cumbersome to use the Bayes rule in its current form. Suppose A can be partitioned into k disjoint events A1,…,Ak. Understanding ∩ as \small⊓, the Bayes rule can be written as:

This rule can easily be generalized to \small∧ as follows: