Resource theories in quantum information science are helpful for the study and quantification of the performance of information-processing tasks that involve quantum systems. These resource theories also find applications in the study of other areas; e.g., the resource theories of entanglement and coherence have found use and implications in the study of quantum thermodynamics and memory effects in quantum dynamics. In this paper, we introduce the resource theory of unextendibility, which is associated to the inability of extending quantum entanglement in a given quantum state to multiple parties. The free states in this resource theory are the k-extendible states, and the free channels are k-extendible channels, which preserve the class of k-extendible states. We make use of this resource theory to derive non-asymptotic, upper bounds on the rate at which quantum communication or entanglement preservation is possible by utilizing an arbitrary quantum channel a finite number of times, along with the assistance of k-extendible channels at no cost. We then show that the bounds we obtain are significantly tighter than previously known bounds for both the depolarizing and erasure channels. 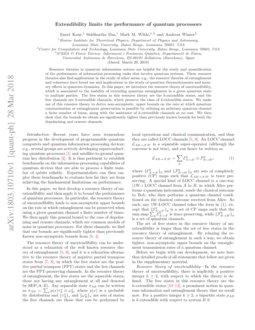 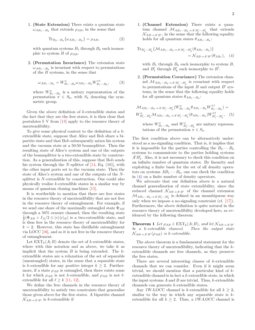 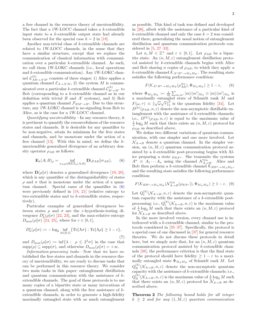 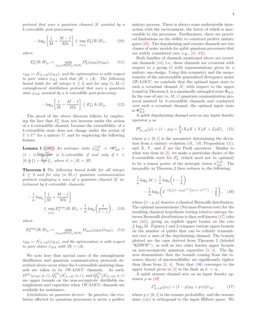 We begin here by establishing some notation and reviewing some definitions needed in the rest of the supplementary material.

a.1 States, channels, isometries, and k-extendibility

a unit vector in

HA. A purification of a density operator ρA is a pure state ψρEA such that TrE{ψρEA}=ρA, where E is known as a purifying system. πA\coloneqqIA/dim(HA)∈D(HA) denotes the maximally mixed state. The fidelity of τ,σ∈B+(H) is defined as F(τ,σ)=\norm√τ√σ21 [39], where \norm⋅1 denotes the trace norm.

The adjoint M†:B(HB)→B(HA) of a linear map M:B(HA)→B(HB) is the unique linear map that satisfies

where ⟨C,D⟩=Tr{C†D} is the Hilbert-Schmidt inner product. An isometry U:H→H′ is a linear map such that U†U=IH.

along with the following conditions for UM to be an isometry:

where ΠBE is a projection onto a subspace of the Hilbert space HBE.

where dim(HR)=dim(HA), and {|i⟩R}i and {|i⟩A}i are fixed orthonormal bases. We extend this notation to multiple parties with a given bipartite cut as

The maximally entangled state ΦRA is denoted as

where |A|=dim(HA). The Choi operator for a channel MA→B is defined as

where idR denotes the identity map on R. For A′≃A, the following identity holds

where A′≃A. The above identity can be understood in terms of a post-selected variant [67] of the quantum teleportation protocol [68]. Another identity that holds is

Let SEP(A:B) denote the set of all separable states σAB∈D(HA⊗HB), which are states that can be written as

where {EyA→A′}y and {FyB→B′}y are sets of completely positive (CP) maps such that LAB→A′B′ is trace preserving.

A special kind of LOCC channel is a one-way (1W-) LOCC channel from A to B, in which Alice performs a quantum instrument, sends the classical outcome to Bob, who then performs a quantum channel conditioned on the classical outcome received from Alice. As such, any 1W-LOCC channel takes the form in (18), except that {EyA→A′}y is a set of CP maps such that the sum map ∑yEyA→A′ is trace preserving, while {FyB→B′}y is a set of quantum channels.

a.2 Entropies and information

The quantum relative entropy of two quantum states is a measure of their distinguishability. For ρ∈D(H) and σ∈B+(H), it is defined as [72]

a.3 Generalized divergence and relative entropies

Let D be a function from D(H)×L+(H) to R. Then D is a generalized divergence [22, 23] if it satisfies the following monotonicity (data-processing) inequality for all density operators ρ and σ, and quantum channels N:

It is a measure of distinguishability of the states ρ and σ. As a direct consequence of the above inequality, any generalized divergence satisfies the following two properties for an isometry U and a state τ [75]:

but it is set to +∞ for α∈(1,∞) if supp(ρ)⊈supp(σ). The sandwiched Rényi relative entropy obeys the following “monotonicity in α” inequality [76]:

The following lemma states that the sandwiched Rényi relative entropy ˜Dα(ρ∥σ) is a particular generalized divergence for certain values of α.

Another generalized divergence is the ε-hypothesis-testing divergence [27, 28], defined as

where ωRB=NA→B(ψRA). Due to the properties of an entanglement measure and the well known Schmidt decomposition theorem, it suffices to optimize over pure states ψRA such that R≃A (i.e., one does not achieve a higher value of Ent(N) by optimizing over mixed states with an unbounded reference system R). In an information-theoretic setting, the entanglement Ent(N) of a channel N characterizes the amount of entanglement that a sender A and a receiver B can generate by using the channel if they do not share entanglement prior to its use.

a.5 Channels with symmetry

In our paper, we define covariant channels in the following way:

A quantum channel is covariant if it is covariant with respect to a group G for which each g∈G has a unitary representation U(g) acting on HA, such that {U(g)}g∈G is a unitary one-design; i.e., the map 1|G|∑g∈GU(g)(⋅)U†(g) always outputs the maximally mixed state for all input states.

The notion of teleportation simulation of a quantum channel first appeared in [5], and it was subsequently generalized in [91, Eq. (11)] to include general LOCC channels in the simulation. It was developed in more detail in [92] and used in the context of private communication in [93] and [61, 94].

All covariant channels (Definition 1) are teleportation-simulable with respect to the resource state NA→B(ΦRA).

Appendix B Framework for the resource theory of k-unextendibility

To develop a framework for the quantum resource theory of k-unextendibility, specified with respect to a fixed subsystem (B) of a bipartite system (AB), let us first recall the definition of a k-extendible state [10, 11, 12]:

For integer k≥2, a state ρAB∈D(HAB) is k-extendible if there exists a state ωABk\coloneqqωAB1B2⋯Bk∈D(HAB1B2⋯Bk) that satisfies the following two criteria:

Note that, due to the permutation symmetry, the second condition above is equivalent to

A state that is not k-extendible by Definition 3 is called k-unextendible.

Let EXTk(A:B) denote the set of all states σAB∈D(HAB) that are k-extendible with respect to system B. A k-extendible state is also ℓ-extendible, where ℓ≤k. This follows trivially from the definition.

A bipartite channel NAB→A′B′ is k-extendible if there exists a quantum channel MAB1⋯Bk→A′B′1⋯B′k that satisfies the following two criteria:

Equivalently, the condition in (39) can be formulated as

Classical k-extendible channels were defined in a somewhat similar way in [63], and so our definition above represents a quantum generalization of the classical notion. We also note here that k-extendible channels were defined in a slightly different way in [64], but our definitions reduce to the same class of channels in the case that the input systems B1 through Bk and the output systems A′ are trivial.

We can reformulate the constraints on the k-extendible channels in terms of the Choi state ΓN^AA′^BkB′k of the extension channel of NAB→A′B′ as follows:

where Y is an arbitrary Hermitian operator and the last constraint need only be verified on a Hermitian matrix basis of B′k−1. The key to deriving these constraints is the following well known “transpose trick”:

where MT is the transpose of M with respect to the basis in (11).

To verify this statement, consider that ∀π∈Sk, the following holds by applying (38) and the fact that σAB1⋯Bk is a k-extension of ρAB:

An important and practically relevant class of k-extendible channels are 1W-LOCC channels:

An example of a k-extendible channel is a one-way local operations and classical communication (1W-LOCC) channel. Consider that a 1W-LOCC channel NAB→A′B′ can be written as

A 1W-LOCC channel can also be represented as

b.2.1 Subclass of extendible channels

We now define a subclass of k-extendible channels. These channels are inspired by 1W-LOCC channels and are realized as follows: Alice performs a quantum channel EA→A′C on her system A and obtains systems A′C. Then, Alice sends C to Bob over a k-extendible channel AkC→C′. This channel is a special case of the bipartite k-extendible channel NAB→A′B′ considered in Definition 5, in which we identify the input C with A of NAB→A′B′, the output C′ with B′ of NAB→A′B′ and the systems B and A′ are trivial. Finally, Bob applies the channel DC′B→B′ on system C′ and his local system B to get B′. Denoting the overall channel by KkAB→A′B′, it is realized as follows:

Due to their structure, we can place an upper bound on the distinguishability of a channel in the subclass described above and the set of 1W-LOCC channels, as quantified by the diamond norm [98]. This upper bound allows us to conclude that the subclass of channels discussed above converges to the set of 1W-LOCC channels in the limit k→∞. Before stating it, recall that the diamond norm of the difference of two channels N and M is given by

where the optimization is with respect to pure-state inputs ψRA, with R a reference system isomorphic to the channel input system A.

where 1W-LOCC denotes the set of all 1W-LOCC channels acting on input systems AB and with output systems A′B′.