Stochastic gradient Markov chain Monte Carlo (MCMC) algorithms have received much attention in Bayesian computing for big data problems, but they are only applicable to a small class of problems for which the parameter space has a fixed dimension and the log-posterior density is differentiable with respect to the parameters. This paper proposes an extended stochastic gradient MCMC lgoriathm which, by introducing appropriate latent variables, can be applied to more general large-scale Bayesian computing problems, such as those involving dimension jumping and missing data. Numerical studies show that the proposed algorithm is highly scalable and much more efficient than traditional MCMC algorithms. The proposed algorithms have much alleviated the pain of Bayesian methods in big data computing. 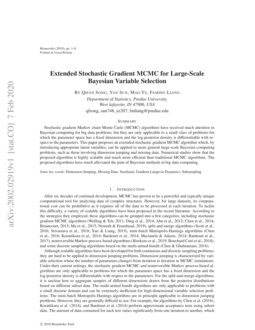 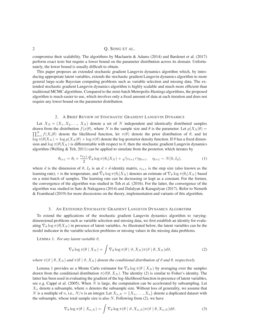 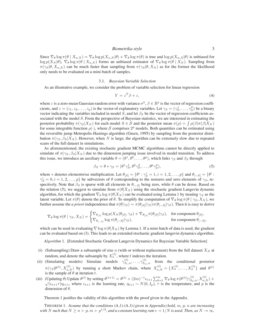 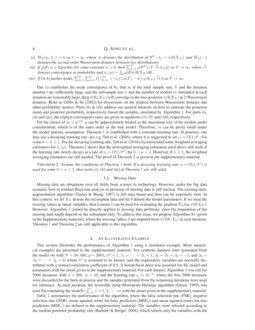 Although scalable algorithms have been developed for both continuous and discrete sampling problems, they are hard to be applied to dimension jumping problems. Dimension jumping is characterized by variable selection where the number of parameters changes from iteration to iteration in MCMC simulations. Under their current settings, the stochastic gradient MCMC and nonreversible Markov process-based algorithms are only applicable to problems for which the parameter space has a fixed dimension and the log-posterior density is differentiable with respect to the parameters. For the split-and-merge algorithms, it is unclear how to aggregate samples of different dimensions drawn from the posterior distributions based on different subset data. The multi-armed bandit algorithms are only applicable to problems with a small discrete domain and can be extremely inefficient for high-dimensional variable selection problems. The mini-batch Metropolis-Hastings algorithms are in principle applicable to dimension jumping problems. However, they are generally difficult to use. For example, the algorithms by Chen et al. (2016), Korattikara et al. (2014), and Bardenet et al. (2014) perform approximate acceptance tests using subset data. The amount of data consumed for each test varies significantly from one iteration to another, which compromise their scalability. The algorithms by Maclaurin & Adams (2014) and Bardenet et al. (2017) perform exact tests but require a lower bound on the parameter distribution across its domain. Unfortunately, the lower bound is usually difficult to obtain.

Let XN=(X1,X2,…, XN) denote a set of N independent and identically distributed samples drawn from the distribution f(x|θ), where N is the sample size and θ is the parameter. Let p(XN|θ)=∏Ni=1f(Xi|θ) denote the likelihood function, let π(θ) denote the prior distribution of θ, and let logπ(θ|XN)=logp(XN|θ)+logπ(θ) denote the log-posterior density function. If θ has a fixed dimension and logπ(θ|XN) is differentiable with respect to θ, then the stochastic gradient Langevin dynamics algorithm (Welling & Teh, 2011) can be applied to simulate from the posterior, which iterates by

where d is the dimension of θ, Id is an d×d

ϵt+1 is the step size (also known as the learning rate), τ is the temperature, and ˆ∇θlogπ(θt|XN)

denotes an estimate of

To extend the applications of the stochastic gradient Langevin dynamics algorithm to varying-dimensional problems such as variable selection and missing data, we first establish an identity for evaluating ∇θlogπ(θ|XN) in presence of latent variables. As illustrated below, the latent variables can be the model indicator in the variable selection problems or missing values in the missing data problems.

For any latent variable ϑ,

where π(ϑ∣θ,XN) and π(θ∣ϑ,XN) denote the conditional distribution of ϑ and θ, respectively. □

Lemma 1 provides us a Monte Carlo estimator for ∇θlogπ(θ∣XN) by averaging over the samples drawn from the conditional distribution π(ϑ|θ,XN). The identity (2) is similar to Fisher’s identity. The latter has been used in evaluating the gradient of the log-likelihood function in presence of latent variables, see e.g. Cappé et al. (2005). When N is large, the computation can be accelerated by subsampling. Let Xn denote a subsample, where n denotes the subsample size. Without loss of generality, we assume that N is a multiple of n, i.e., N/n is an integer. Let Xn,N={Xn,…,Xn} denote a duplicated dataset with the subsample, whose total sample size is also N. Following from (2), we have

forms an unbiased estimator of

As an illustrative example, we consider the problem of variable selection for linear regression

is a zero-mean Gaussian random error with variance

is the vector of regression coefficients, and

z=(z1,z2,…,zp) is the vector of explanatory variables. Let γS=(γ1S,…,γpS) be a binary vector indicating the variables included in model S, and let βS be the vector of regression coefficients associated with the model S

. From the perspective of Bayesian statistics, we are interested in estimating the posterior probability

π(γS|XN) for each model S∈S and the posterior mean π(ρ)=∫ρ(β)π(β|XN) for some integrable function ρ(⋅), where S comprises 2p models. Both quantities can be estimated using the reversible jump Metropolis-Hastings algorithm (Green, 1995) by sampling from the posterior distribution π(γS,βS|XN). However, when N is large, the algorithm can be extremely slow due to repeated scans of the full dataset in simulations.

As aforementioned, the existing stochastic gradient MCMC algorithms cannot be directly applied to simulate of π(γS,βS|XN) due to the dimension jumping issue involved in model transition. To address this issue, we introduce an auxiliary variable θ=(θ1,θ2,…,θp), which links γS and βS through

where ∗ denotes elementwise multiplication. Let θ[S]={θi:γiS=1,i=1,2,…,p} and θ[−S]={θi:γiS=0,i=1,2,…,p} be subvectors of θ corresponding to the nonzero and zero elements of γS, respectively. Note that βS is sparse with all elements in θ[−S] being zero, while θ can be dense. Based on the relation (5), we suggest to simulate from π(θ|XN) using the stochastic gradient Langevin dynamic algorithm, for which the gradient ∇θlogπ(θ|XN) can be evaluated using Lemma 1 by treating γS as the latent variable. Let π(θ) denote the prior of θ. To simplify the computation of ∇θlogπ(θ∣γS,XN), we further assume the a priori independence that π(θ|γS)=π(θ[S]|γS)π(θ[−S]|γS). Then it is easy to derive

which can be used in evaluating ∇logπ(θ|XN) by Lemma 1. If a mini-batch of data is used, the gradient can be evaluated based on (3). This leads to an extended stochastic gradient langevin dynamics algorithm.

Theorem 1 justifies the validity of this algorithm with the proof given in the Appendix.

Part (i) establishes the weak convergence of θt; that is, if the total sample size N and the iteration number t are sufficiently large, and the subsample size n and the number of models m simulated at each iteration are reasonably large, then π(θt|XN) will converge to the true posterior π(θ|XN) in 2-Wasserstein distance. Refer to Gibbs & Su (2002) for discussions on the relation between Wasserstein distance and other probability metrics. Parts (ii) & (iii) address our general interests on how to estimate the posterior mean and posterior probability, respectively, based the samples simulated by Algorithm 3.1. For parts (i), (ii) and (iii), the explicit convergence rates are given in equations (8), (10) and (15), respectively.

Missing data are ubiquitous over all fields from science to technology. However, under the big data scenario, how to conduct Bayesian analysis in presence of missing data is still unclear. The existing data-augmentation algorithm (Tanner & Wong, 1987) is full data based and thus can be extremely slow. In this context, we let XN denote the incomplete data and let θ denote the model parameters. If we treat the missing values as latent variables, then Lemma 1 can be used for evaluating the gradient ∇θlogπ(θ|XN). However, Algorithm 3.1

cannot be directly applied to missing data problems, since the imputation of the missing data might depend on the subsample only. To address this issue, we propose Algorithm S1 (given in the Supplementary material), where the missing values

ϑ are imputed from π(ϑ|θ,Xn) at each iteration. Theorem 1 and Theorem 2 are still applicable to this algorithm.

is assumed to be known, and the explanatory variables are normally distributed with a mutual correlation coefficient of 0.5. A hierarchical prior was assumed for the model and parameters with the detail given in the supplementary material. For each dataset, Algorithm

3.1 was run for 5000 iterations with n=200, m=10, and the learning rate ϵt≡10−6, where the first 2000 iterations were discarded for the burn-in process and the samples generated from the remaining iterations were used for inference. At each iteration, the reversible jump Metropolis-Hastings algorithm (Green, 1995) was used for simulating the models γ(t)Si,n, i=1,2,…,m with the detail given in the supplementary material.

Table 1 summarizes the performance of the algorithm, where the false selection rate (FSR), negative selection rate (NSR), mean squared errors for false predictors (MSE0) and mean squared errors for true predictors (MSE1) are defined in the supplementary material. The variables were selected according to the median posterior probability rule (Barbieri & Berger, 2004), which selects only the variables with the marginal inclusion probability greater than 0.5. The Bayesian estimates of parameters were obtained by averaging over a set of thinned (by a factor of 10) posterior samples. For comparison, some existing algorithms were applied to this example with the results given in Table 1 and the implementation details given in the supplementary material. The comparison show that the proposed algorithm has much alleviated the pain of Bayesian methods in big data analysis.

This paper has extended the stochastic gradient Langevin dynamics algorithm to general large-scale Bayesian computing problems, such as those involving dimension jumping and missing data. To the best of our knowledge, this paper provides the first Bayesian method and theory for high-dimensional discrete parameter estimation with mini-batch samples, while the existing methods work for continuous parameters or very low dimensional discrete problems only. Other than generalized linear models, the proposed algorithm can have many applications in data science. For example, it can be used for sparse deep learning and accelerating computation for statistical models/problems where latent variables are involved, such as hidden Markov models, random coefficient models, and model-based clustering problems.

This work was partially supported by the grants DMS-1811812, DMS-1818674, and R01-GM126089. The authors thank the editor, associate editor and referees for their insightful comments/suggestions.

where the second and third equalities follow from the relation ∇θlog(g(θ))=∇θg(θ)/g(θ) (for an appropriate function g(θ)), and the fourth and fifth equalities are by direct calculations of the conditional distributions. ■

Let π∗=π(θ|XN) denote the posterior density function of θ, and let πt=π(θ(t)|XN) denote the density of θ(t) generated by Algorithm 3.1 at iteration t. We are interested in studying the discrepancy between π∗ and πt in the 2nd order Wasserstein distance. The following conditions are assumed.

Part (i). In Algorithm 3.1, the gradient ∇logπ(θ(t)|XN) is estimated by running a short Markov chain with a mini-batch of data. Since the initial distribution of the Markov chain might not coincide with its equilibrium distribution, the resulting gradient estimate can be biased. Let ζ(t)=1m∑mk=1∇θlogπ(θ(t)|γ(t)Sk,n,X(t)n,N)−∇logπ(θ(t)|XN). Following from (A.3), we have

where θ and ~θ

denotes expectation with respect to the joint distribution of

provided p≺n≤N. Since {θ(t):t=1,2,…} forms a time-homogeneous Markov chain, whose convergence is measured by (8), and the function π(γS|XN,θ) is bounded and continuous in θ,

Conditioned on X(t)n,N and θ(t), by the standard theory of MCMC, m−1∑mi=1I(γ(t,i)S=γS) forms a consistent estimator of π(γS|X(t)n,N,θ(t)) with an asymptotic bias of O(1/m). Since m is increasing with p and N, the estimator is asymptotically unbiased. Combining this result with (14) leads to