In this article, the exponentiated discrete Lindley distribution is presented and studied. Some important distributional properties are discussed. Using the maximum likelihood method, estimation of the model parameters is investigated. Furthermore, simulation study is performed to observe the performance of the estimates. Finally, the model with two real data sets is examined. 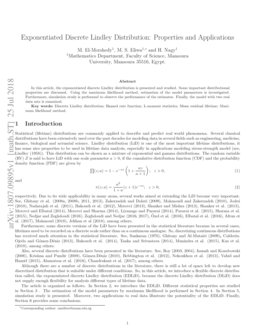 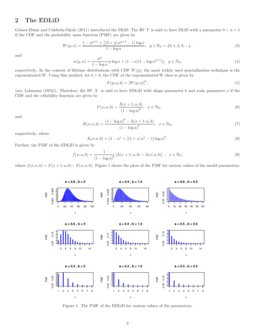 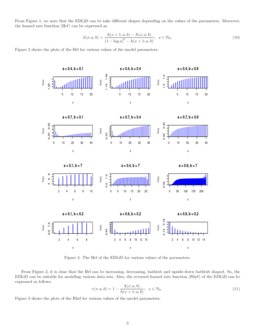 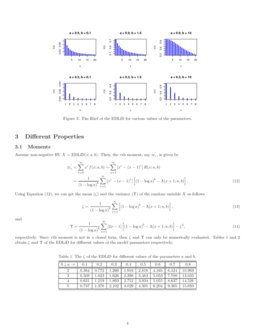 On a bimodal Birnbaum-Saunders distribution with applications to lifetime data

The Birnbaum-Saunders distribution is a flexible and useful model which ...
Roberto Vila, et al. ∙

The technique of wrapping of a univariate probability distribution is ve...
Hazem Al-Mofleh, et al. ∙

In this work, we derive some novel properties of the bimodal normal dist...
Roberto Vila, et al. ∙

Statistical (lifetime) distributions are commonly applied to describe and predict real world phenomena. Several classical distributions have been extensively used over the past decades for modeling data in several fields such as engineering, medicine, finance, biological and actuarial science. Lindley distribution (LiD) is one of the most important lifetime distributions, it has some nice properties to be used in lifetime data analysis, especially in applications modeling stress-strength model (see, Lindley (1958)). This distribution can be shown as a mixture of exponential and gamma distributions. The random variable (RV)

, if the cumulative distribution function (CDF) and the probability density function (PDF) are given by

Furthermore, some discrete versions of the LiD have been presented in the statistical literature because in several cases, lifetimes need to be recorded on a discrete scale rather than on a continuous analogue. So, discretizing continuous distributions has received much attention in the statistical literature. See, Sankaran (1970), Ghitany and Al-Mutairi (2009), Calderín-Ojeda and Gómez-Déniz (2013), Bakouch et al. (2014), Tanka and Srivastava (2014), Munindra et al. (2015), Kus et al. (2018), among others.

The article is organized as follows. In Section 2, we introduce the EDLiD. Different statistical properties are studied in Section 3 . The estimation of the model parameters by maximum likelihood is performed in Section 4. In Section 5, simulation study is presented. Moreover, two applications to real data illustrate the potentiality of the EDLiD. Finally, Section 6 provides some conclusions.

Gómez-Déniz and Calderín-Ojeda (2011) introduced the DLiD. The RV Y is said to have DLiD with a parameter 0<a<1 if the CDF and the probability mass function (PMF) are given by

(see, Lehmann (1952)). Therefore, the RV X  is said to have EDLiD with shape parameter b and scale parameter a if the CDF and the reliability function are given by

Further, the PMF of the EDLiD is given by

From Figure 1, we note that the EDLiD can be take different shapes depending on the values of the parameters. Moreover, the hazard rate function (Hrf) can be expressed as

Figure 2 shows the plots of the Hrf for various values of the model parameters.

From Figure 2, it is clear that the Hrf can be increasing, decreasing, bathtub and upside-down bathtub shaped. So, the EDLiD can be suitable for modeling various data sets. Also, the reversed hazard rate function (Rhrf) of the EDLiD can be expressed as follows

Figure 3 shows the plots of the Rhrf for various values of the model parameters.

Assume non-negative RV X∼ EDLiD(x;a,b). Then, the rth moment, say ϖ′r, is given by

Υ) of the random variable X as follows

respectively. Since rth moment is not in a closed form, then ζ and Υ can only be numerically evaluated. Tables 1 and 2 obtain ζ and Υ of the EDLiD for different values of the model parameters respectively.

Depending on the model parameters, Tables 1 and 2 obtain that ζ and Υ are increasing when a is constant (increasing) and b

is increasing (constant). Furthermore, the skewness (

Tables 3 and 4 obtain that Ξ and Θ are decreasing when a is constant and b is increasing. On the other hand, we can get the probability generating function (PGF) of the RV X as a form

In order to study the ageing behavior of a component or a system of components there have been defined several measures in the reliability and survival analysis literature. The ς(i) is a helpful tool to model and analyze the burn-in and maintenance policies. In the discrete setting, ς(i) is defined as

Another measure of interest in survival analysis is ς∗(i). It measures the time elapsed since the failure of T given that the system has failed sometime before i. In the discrete setting, ς∗(i) is defined as

Lemma 1. The mean of the RV T∼ EDLiD(a,b) can be expressed as

Proof. It is easy to prove this Lemma by using the following Equation

Lemma 2. The Rhrf and the ς∗(i;a,b) are related as follows

S-S∗ analysis has been used in mechanical component design. The probability of failure is based on the probability of S exceeding S∗. Assume that both S and S∗ are in the positive domain. The expected reliability (R∗) can be calculated by

From Equation (22), it is clear that the value of R∗ does not depend only on the values of the model parameters.

So, the vth moments of Xi:n can be written as

On the other hand, Hosking (1990) has defined the L-moments (Lms) to summaries theoretical distribution and observed samples. He has shown that the Lms have good properties as measure of distributional shape and are useful for fitting distribution to data. Lms are expectation of certain linear combinations of Os. The Lms of  X  can be expressed as follows

In this section, we determine the maximum likelihood estimates (MLEs) of the model parameters from complete samples. Assume X1,X2,...,Xn be a random sample of size n from the EDLiD(a,b). The log-likelihood function (L) can be expressed as

By differentiating Equation (27) with respect to the parameters a and b, we get the normal nonlinear likelihood equations as follows

From Figure 4, it is clear that the biases and the MSEs of the estimated parameters ⟶0 while n growing. So, the MLE is a good method for estimating the model parameters.

In this section, we illustrate the importance of the EDLiD using two real data sets.

The first data set (I): represents the number of women who are working on shells for 5 weeks discussed in Consul and Jain (1973). We shall compare the fits of the EDLiD with some competitive models such as discrete generalized exponential second type (DGE2), discrete Weibull (DW), discrete Lindley (DLi), discrete Pareto (DPa) and Poisson (P) distributions.

The second data set (II): represents the counts of cysts of kidneys using steroids. This data set originated from a study Chan et al. (2009). We shall compare the fits of the EDLiD with some competitive models such as DW, discrete Burr-XII (DB-XII), discrete Lomax (DLo), geometric (Geo), DLi, P and discrete Rayleigh (DR) distributions.

Tables 5 and 6 obtain the MLEs with their corresponding standard errors (Se(.)), as well as

From Table 6, it is clear that the EDLiD is the best distribution among all tested distributions, because it has the smallest value among −L, AIC, CAIC, BIC, HQIC and χ2, as well as it has the largest P-value. Figure 5 shows the fitted PMFs for data set I, which support the results in Table 6.

For the data set (II), Tables 7 and 8 obtain the MLEs with their corresponding Se, as well as −L, AIC, CAIC, BIC, HQIC, OF, EF, d.f, χ2and P-values respectively.

From Table 8, it is clear that the EDLiD is the best distribution among all tested models. Figure 6 shows the fitted PMFs for data set II, which support the results in Table 8.

A two-parameter EDLiD has been proposed. Its various distributional properties have been discussed. It was found that the proposed distribution has a simple structure, is more flexible and has a longer tail than the DLiD and other discrete distributions in modeling data from different fields. In the future, we will discuss the bivariate and multivariate extensions of this distribution.