This article presents and analyses an exponential integrator for the stochastic Manakov equation, a system arising in the study of pulse propagation in randomly birefringent optical fibers. We first prove that the strong order of the numerical approximation is 1/2 if the nonlinear term in the system is globally Lipschitz-continuous. Then, we use this fact to prove that the exponential integrator has convergence order 1/2 in probability and almost sure order 1/2, in the case of the cubic nonlinear coupling which is relevant in optical fibers. Finally, we present several numerical experiments in order to support our theoretical findings and to illustrate the efficiency of the exponential integrator as well as a modified version of it. 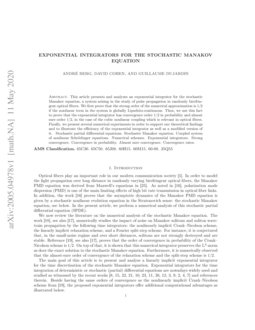 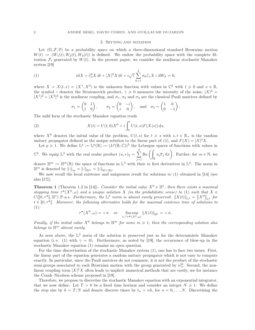 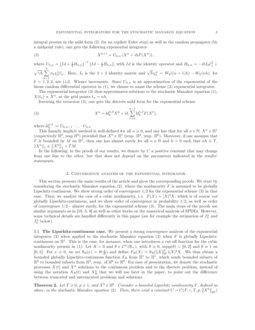 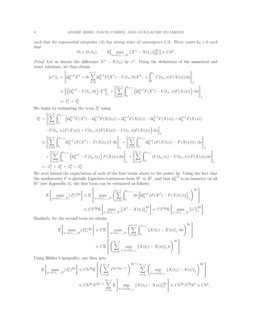 Optical fibers play an important role in our modern communication society [agrawal2007nonlinear]. In order to model the light propagation over long distance in randomly varying birefringent optical fibers, the Manakov PMD equation was derived from Maxwell’s equations in [Wai-1996]. As noted in [garnierm06], polarization mode dispersion (PMD) is one of the main limiting effects of high bit rate transmission in optical fiber links. In addition, the work [garnierm06] proves that the asymptotic dynamics of the Manakov PMD equation is given by a stochastic nonlinear evolution equation in the Stratonovich sense: the stochastic Manakov equation, see below. In the present article, we perform a numerical analysis of this stochastic partial differential equation (SPDE).

We now review the literature on the numerical analysis of the stochastic Manakov equation. The work [Gazeau:13], see also [GazeauPhd], numerically studies the impact of noise on Manakov solitons and soliton wave-train propagation by the following time integrators: the nonlinearly implicit Crank–Nicolson scheme, the linearly implicit relaxation scheme, and a Fourier split-step scheme. For instance, it is conjectured that, in the small-noise regime and over short distances, solitons are not strongly destroyed and are stable. Reference [MR3166967], see also [GazeauPhd], proves that the order of convergence in probability of the Crank–Nicolson scheme is 1/2. On top of that, it is shown that this numerical integrator preserves the L2-norm as does the exact solution to the stochastic Manakov equation. Furthermore, it is numerically observed that the almost-sure order of convergence of the relaxation scheme and the split-step scheme is 1/2.

The main goal of this article is to present and analyse a linearly implicit exponential integrator for the time discretisation of the stochastic Manakov equation. Exponential integrators for the time integration of deterministic or stochastic (partial) differential equations are nowadays widely used and studied as witnessed by the recent works [MR2413146, MR2536086, MR2578878, MR2652783, MR2995211, MR3047942, MR3033008, MR3353942, MR3463447, MR3484400, MR3736655, MR3771721, acqs18, MR3663004] and references therein. Beside having the same orders of convergence as the nonlinearly implicit Crank–Nicolson scheme from [MR3166967], the proposed exponential integrators offer additional computational advantages as illustrated below.

Let (Ω,F,P) be a probability space on which a three-dimensional standard Brownian motion W(t):=(W1(t),W2(t),W3(t)) is defined. We endow the probability space with the complete filtration Ft generated by W(t). In the present paper, we consider the nonlinear stochastic Manakov system [MR3166967]

where X=X(t,x)=(X1,X2) is the unknown function with values in C2 with t≥0 and x∈R, the symbol ∘ denotes the Stratonovich product, γ≥0 measures the intensity of the noise, |X|2=|X1|2+|X2|2 is the nonlinear coupling, and σ1, σ2 and σ3 are the classical Pauli matrices defined by

The mild form of the stochastic Manakov equation reads

where X0 denotes the initial value of the problem, U(t,s) for t≥s with s,t∈R+ is the random unitary propagator defined as the unique solution to the linear part of (1), and F(X)=|X|2X.

Let p≥1. We define the Lebesgue spaces of functions with values in C2. We equip L2 with the real scalar product (u,v)2=2∑j=1Re(∫Ruj¯¯¯vjdx). Further, for m∈N, we denote Hm:=Hm(R) the space of functions in L2 with their m first derivatives in L2. The norm in Hm is denoted by ∥⋅∥m=∥⋅∥Hm=∥⋅∥Hm(R).

We now recall the local existence and uniqueness result for solutions to (1) obtained in [MR3024974] (see also [GazeauPhd]).

Consider the initial value X0∈H1, then there exists a maximal stopping time τ∗(X0,ω) and a unique solution X (in the probabilistic sense) to (1) such that X∈C([0,τ∗[,H1) P-a.s. Furthermore, the L2 norm is almost surely preserved: ∥X(t)∥L2=∥∥X0∥∥L2 for t∈[0,τ∗[. Moreover, the following alternative holds for the maximal existence time of solutions to (1):

For the time discretisation of the stochastic Manakov system (1), one has to face two issues. First, the linear part of the equation generates a random unitary propagator which is not easy to compute exactly. In particular, since the Pauli matrices do not commute, it is not the product of the stochastic semi-groups associated to each Brownian motion with the group generated by i∂2x. Second, the nonlinear coupling term |X|2X often leads to implicit numerical methods that are costly, see for instance the Crank–Nicolson scheme proposed in [MR3166967].

Therefore, we propose to discretise the stochastic Manakov equation with an exponential integrator, that we now define. Let T>0 be a fixed time horizon and consider an integer N≥1. We define the step size by h=T/N and denote discrete times by tn=nh, for n=0,…,N. Discretising the integral present in the mild form (2) (by an explicit Euler step) as well as the random propagator (by a midpoint rule), one gets the following exponential integrator

Iterating the recursion (3), one gets the discrete mild form for the exponential scheme

In the following, in the proofs of our results, we denote by C a positive constant that may change from one line to the other, but that does not depend on the parameters indicated in the results’ statements.

3. Convergence analysis of the exponential integrator

This section presents the main results of the article and gives the corresponding proofs. We start by considering the stochastic Manakov equation (2), where the nonlinearity F is assumed to be globally Lipschitz-continuous. We show strong order of convergence 1/2 for the exponential scheme (3) in that case. Then, we analyse the case of a cubic nonlinearity, i. e. F(X)=|X|2X, which is of course not globally Lipschitz-continuous, and we show order of convergence in probability 1/2, as well as order of convergence 1/2− almost surely, for the exponential scheme (3). The main steps of the proofs use similar arguments as in [MR3166967, MR3312594, MR3736655]

as well as other works on the numerical analysis of SPDEs. However, some technical details are handled differently in this paper (see for example the estimation of

We present a strong convergence analysis of the exponential integrator (3) when applied to the stochastic Manakov equation (2) when F is globally Lipschitz-continuous on H1. This is the case, for instance, when one introduces a cut-off function for the cubic nonlinearity present in (1): Let R>0 and θ∈C∞(R+), with θ≥0, supp(θ)⊂[0,2] and θ≡1 on [0,1]. For x≥0, we set θR(x)=θ(xR) and define FR(X)=θR(∥X∥2H1)|X|2X. We thus obtain a bounded globally Lipschitz-continuous function FR from H1 to H1, which sends bounded subsets of H2 to bounded subsets from H2, resp. of H6 to H6. For ease of presentation, we denote the stochastic processes X(t) and Xn solutions to the continuous problem and to the discrete problem, instead of using the notation XR(t) and XnR that we will use later in the paper, to point out the difference between truncated and untruncated problems and solutions.

Let T≥0, p≥1, and X0∈H6. Consider a bounded Lipschitz nonlinearity F, defined as above, in the stochastic Manakov equation (2). Then, there exist a constant C=C(F,γ,T,p,∥∥X0∥∥H6) such that the exponential integrator (3) has strong order of convergence 1/2: There exists h0>0 such that

Let us denote the difference Xn−X(tn) by en. Using the definitions of the numerical and exact solutions, we thus obtain

We begin by estimating the term In2 using

We next bound the expectation of each of the four terms above to the power 2p. Using the fact that the nonlinearity F is globally Lipschitz-continuous from H1 to H1, and that Un,ℓh is an isometry on all Hs (see Appendix 5), the first term can be estimated as follows

Similarly, for the second term we obtain

Using Hölder’s inequality, one then gets

where we have used the estimate from Lemma 5.4 (temporal regularity of the mild solution) in [MR3166967].

To bound the last term, we first use the isometry property of the continuous random propagator and Hölder’s inequality to get

In order to estimate the expectation above, we write this term as

where S(t) is the group solution to the free Schrödinger equation. Owing at the regularity property of the group S (see for instance the first inequality in the proof of [GazeauPhd, Lemma 4.2.1]), the fact that the exact solution X is almost surely bounded in H2, that F sends bounded sets of H2 to bounded sets of H2, and Burkholder–Davis–Gundy’s inequality (for the second term), one obtains the following bound for the first term in (3.1)

Using the fact that the random propagator U is an isometry, that F is globally Lipschitz-continuous, and the regularity property of the exact solution X, one gets the estimate

Combining the estimates above, one finally arrives at the bound

For T=T1 small enough, i. e. such that CT2p1<1, the inequality above gives

on [0,T1]. In order to iterate this procedure, we impose, if necessary, that h is small enough (or, equivalently, that N is big enough), to ensure that T1 can be chosen as before and as some integer multiple of h (say T1=rh for some positive integer r), while T is some multiple integer of T1 (say MT1=T for some positive integer M). To obtain a bound for the error on the longer time interval [0,T], we iterate the procedure above by choosing T2=2T1 and estimate the error on the interval [T1,T2]. We repeat this procedure, M times, up to final time T. This can be done since the above error estimates are uniform on the intervals [Tm,Tm+1] for m=0,…,M−1 (with a slight abuse of notation for the time interval):

where CE is the error constant obtained above, tn=nh are discrete times in [Tm,Tm+1], X0(t):=X(t) is the exact solution with initial value X0, Xm(t) denotes the exact solution with initial value Ym at time Tm=mT1=(mr)h=tmr, and Ym=Xmr corresponds to numerical solutions at time Tm for m=0,…,M−1. For the total error, we thus obtain (details are only written for the first two intervals)

where CL is the Lipschitz constant of the exact flow of (1) from H1 to itself and the last constant C is independent of N and h with Nh=T for N big enough. This concludes the proof of the theorem. ∎

3.2. Convergence in the non-Lipschitz case

Let X0∈H6 and T>0. Denote by τ∗=τ∗(X0,ω) the maximum stopping time for the existence of a strong adapted solution, denoted by X(t), of the stochastic Manakov equation (1). For all stopping time τ<τ∗∧T a.s. there exists h0>0 such that we have

where Xn denotes the numerical solution given by the exponential integrator (3) with time step h and Nτ=⌈τh⌋.

For R>0, let us denote by XR, resp. XnR, the exact, resp. numerical, solutions to the stochastic Manakov equation (2) with a truncated nonlinearity FR. We denote by κ a positive constant such that for all Y∈H1, ∥∥|Y|2Y∥∥1≤κ∥Y∥31.

In order to estimate the terms on the right-hand side, we define the random variable

By definition of the exponential integrator (3), for h<3R20κ, we have

If nε≤Nτ, then thanks to the definition of nε. Therefore we get max0≤n≤Nτ∥∥Xn4R0−X4R0(tn)∥∥1≥ε. Furthermore, by definition of nε, we have {max0≤n≤Nτ∥Xn−X(tn)∥1≥ε}∩{nε>Nτ}=∅. We then deduce that

Combining the above, using Markov’s inequality as well as the strong error estimates from Theorem 2, since τ<T a.s., there exists C>0 such that

This last term is smaller than ε/2 for h small enough. All together we obtain

and thus convergence in probability.

To get the order of convergence in probability, we choose R1≥R0−1 such that for all h>0 small enough, P(max0≤n≤Nτ∥Xn∥1≥R1)≤ε2. As above, for all positive real number C, we have

Taking probabilities and using Markov’s inequality as well as the strong error estimate from Theorem 2, we obtain

since τ≤T almost surely. For C large enough, we infer