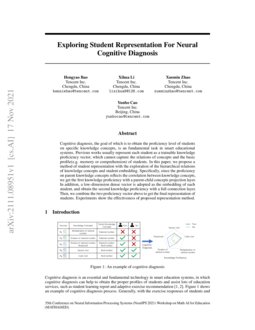 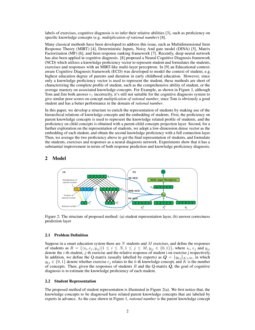 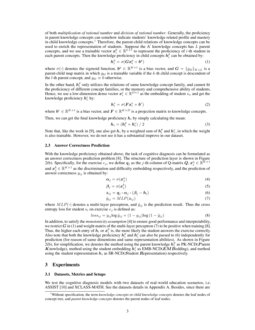 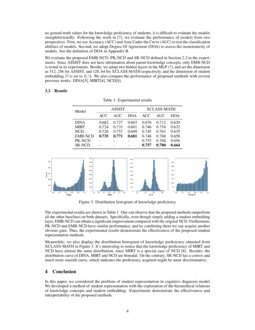 Cognitive diagnosis is a fundamental and crucial task in many educationa...
Song Cheng, et al. ∙

We present an investigation in the connection between computing students...
Antti Knutas, et al. ∙

proposed a Neural Cognitive Diagnosis framework (NCD) which utilizes a knowledge proficiency vector to represent student and formulates the students, exercises and responses with an MIRT-like multi-layer perceptron. In

ecd an Educational context-aware Cognitive Diagnosis framework (ECD) was developed to model the context of student, e.g. highest education degree of parents and duration in early childhood education. However, since only a knowledge proficiency vector is used to represent the student, these methods are short of characterizing the complete profile of student, such as the comprehensive ability of student, or the average mastery on associated knowledge concepts. For Example, as shown in Figure 1, although Tom and Jim both answer e1 incorrectly, it’s still not suitable for the cognitive diagnosis system to give similar poor scores on concept multiplication of rational number, since Tom is obviously a good student and has a better performance in the domain of rational number.

Suppose in a smart education system there are N students and M exercises, and define the responses of students as R={⟨si,ej,yij⟩|1≤i≤N,1≤j≤M,yij∈{0,1}}, where si, ej and yij denote the i-th student, j-th exercise and the relative response of student i on exercise j respectively. In addition, we define the Q-matrix (usually labelled by experts) as Q={qkj}K×M, in which qkj∈{0,1} denote whether exercise ej relates to the k-th knowledge concept, and K is the number of concepts. Then, given the responses of students R and the Q-matrix Q

, the goal of cognitive diagnosis is to estimate the knowledge proficiency of each student.

is a bias vector, and

G={gkl}K×L is a parent-child map matrix in which gkl is a trainable variable if the k-th child concept is descendent of the l-th parent concept, and gkl≡0 otherwise.

In the other hand, hpi only utilizes the relations of same knowledge concept family, and cannot fit the proficiency of different concept families, or the memory and comprehensive ability of students. Hence, we use a low-dimension dense vector xei∈RD×1 as the embedding of student si, and get the knowledge proficiency hei by:

where be∈RK×1 is a bias vector, and F∈RK×D is a projection matrix to knowledge concepts.

Then, we can get the final knowledge proficiency hi by simply calculating the mean:

Note that, like the work in ecd , one also get hi by a weighted sum of hpi and hei, in which the weight is also trainable. However, we do not see it has a substantial improve in our dataset.

With the knowledge proficiency obtained above, the task of cognitive diagnosis can be formulated as an answer correctness prediction problem ncd . The structure of prediction layer is shown in Figure 2(b). Specifically, for the exercise ej, we define qj as the j-th column of Q-matrix Q, xaj∈RK×1 and xbj∈RK×1 as the discrimination and difficulty embedding respectively, and the prediction of answer correctness yij is obtained by:

where MLP(\dotproduct) denotes a multi-layer perceptron, and ^yij is the prediction result. Thus the cross entropy loss for student si on exercise ej is defined as:

In addition, to satisfy the monotonicity assumption mirt to ensure good performance and interpretability, we restrict G in (1) and weight matrix of the multi-layer perceptron (7) to be positive when training ncd . Thus, the higher each entry of hi or xpi is, the more likely the student answers the exercise correctly. Also note that both the knowledge proficiency hpi and hei can also be passed to (6) independently for prediction (for reason of same dimentions and same representation abilities). As shown in Figure 2(b), for simplification, we denotes the method using the parent knowledge hpi as PK-NCD(Parent Knowledge), method using the student embedding hei as EMB-NCD(EMBedding), and method using the student representation hi as SR-NCD(Student Representation) respectively.

We test the cognitive diagnosis models with two datasets of real-world education scenarios, i.e. ASSIST assist and XCLASS-MATH. See the datasets details in Appendix A. Besides, since there are no ground-truth values for the knowledge proficiency of students, it is difficult to evaluate the models straightforwardly. Following the work in irr , we evaluate the performance of models from two perspectives. First, we use Accuracy (ACC) and Area Under the Curve (AUC) to test the classification abilities of models. Second, we adopt Degree Of Agreement (DOA) to assess the monotonicity of models. See the definition of DOA in Appendix B.

We evaluate the proposed EMB-NCD, PK-NCD and SR-NCD defined in Section 2.3 in the experiments. Since ASSIST does not have information about parent knowledge concepts, only EMB-NCD is tested in its experiments. Beside, we adopt two hidden layers in the MLP (7), and set the dimension as 512, 256 for ASSIST, and 128, 64 for XCLASS-MATH respectively, and the dimension of student embedding D is set to K/4. We also compare the performance of proposed methods with several previous works: DINAdina , MIRTmirt , NCDncd .

The experimental results are shown in Table 1. One can observe that the proposed methods outperform all the other baselines on both datasets. Specifically, even though simply adding a student embedding layer, EMB-NCD can obtain a significant improvement compared with the original NCD. Furthermore, PK-NCD and EMB-NCD have similar performance, and by combining them we can acquire another obvious gain. Thus, the experimental results demonstrate the effectiveness of the proposed student representation methods.

The statistics of the datasets are summarized in Table 2. ASSIST (ASSISTments 2009-2010 “skill builder”) is a widely used open dataset collected by the ASSISTments online tutoring systems222https://sites.google.com/site/assistmentsdata/home/assistment-2009-2010-data/skill-builder-data-2009-2010. XCLASS-MATH is a mathematical dataset collected by the smart education system XCLASS333https://xclass.qq.com. XCLASS-MATH will be released later.

, in which teachers assign and correct students’ homework online, and students do their homework with an e-ink pad. It mainly contains the mathematical homework logs within two months of the

Appendix B Degree of Agreement

The Degree of Agreement (DOA) is defined as:

where Z=∑Ni=1∑Nj=1δ(hik,hjk), hik denotes the proficiency of student i on concept k, δ(x,y)=1 if x>y and δ(x,y)=0 otherwise, Ilk=1 if exercise l contains concept k and Ilk=0 otherwise, and J(l,i,j)=1 if both student i and j did exercise l and J(l,i,j)=0 otherwise. The perspective of DOA is that, if student i has a higher proficiency on concept k than student j, then student i is more likely to answer exercise related to concept k correctly than student j. The average of DOA(k) on all concepts is used in our experiments. Thus, the model with a higher DOA score might have a better monotonicity and interpretability.