We consider the usage of parallel-in-time algorithms of the Parareal and multigrid-reduction-in-time (MGRIT) methodologies for the parallel-in-time solution of the eddy current problem. Via application of these methods to a two-dimensional model problem for a coaxial cable model, we show that a significant speedup can be achieved in comparison to sequential time stepping. 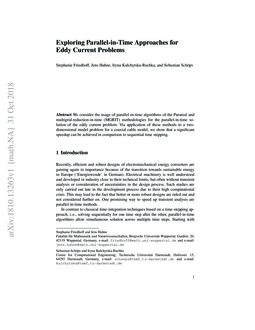 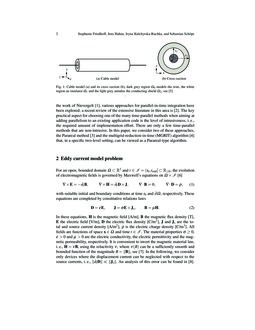 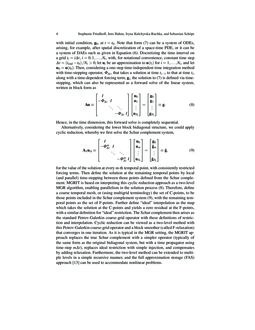 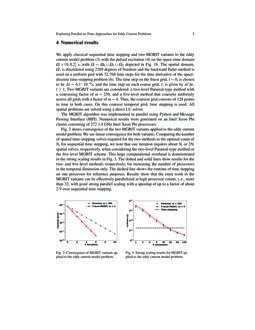 Recently, efficient and robust designs of electromechanical energy converters are gaining again in importance because of the transition towards sustainable energy in Europe (‘Energiewende’ in German). Electrical machinery is well understood and developed in industry close to their technical limits, but often without transient analysis or consideration of uncertainties in the design process. Such studies are only carried out late in the development process due to their high computational costs. This may lead to the fact that better or more robust designs are ruled out and not considered further on. One promising way to speed up transient analysis are parallel-in-time methods.

In contrast to classical time-integration techniques based on a time-stepping approach, i. e., solving sequentially for one time step after the other, parallel-in-time algorithms allow simultaneous solution across multiple time steps. Starting with the work of Nievergelt Nivergelt1964 , various approaches for parallel-in-time integration have been explored; a recent review of the extensive literature in this area is Gander2015_Review . The key practical aspect for choosing one of the many time-parallel methods when aiming at adding parallelism to an existing application code is the level of intrusiveness, i. e., the required amount of implementation effort. There are only a few time-parallel methods that are non-intrusive. In this paper, we consider two of these approaches, the Parareal method Lions_etal2001 and the multigrid-reduction-in-time (MGRIT) algorithm Falgout_etal_2014 that, in a specific two-level setting, can be viewed as a Parareal-type algorithm.

For an open, bounded domain Ω⊂R3 and t∈I=(t0,tend]⊂R≥0, the evolution of electromagnetic fields is governed by Maxwell’s equations on Ω×I Jackson_1998aa

with suitable initial and boundary conditions at time t0 and ∂Ω, respectively. These equations are completed by constitutive relations laws

In these equations, →H is the magnetic field [A/m], →B the magnetic flux density [T], →E the electric field [V/m], →D the electric flux density [C/m2], →J and →Js are the total and source current density [A/m2], ρ is the electric charge density [C/m3]. All fields are functions of space →x∈Ω and time t∈I. The material properties σ≥0, ε>0 and μ>0 are the electric conductivity, the electric permittivity and the magnetic permeability, respectively. It is convenient to invert the magnetic material law, i. e., →H=ν→B, using the reluctivity ν, where ν(B) can be a sufficiently smooth and bounded function of the magnitude B=∥→B∥, see Heise_1994aa . In the following, we consider only devices where the displacement current can be neglected with respect to the source currents, i. e., ∥∂t→D∥≪∥→Js∥. An analysis of this error can be found in Schmidt_2008aa . Assuming ∂t→D=0 yields the so-called magnetoquasistatic approximation or eddy current problem. Eddy currents lead to the skin effect, i. e., currents through a conductor are pushed to the surface if frequency increases (Jackson_1998aa, , Chapter 5.18).

One may introduce the (‘modified’ Emson_1988aa

→A such that →E=−∂t→A. Then, inserting the equations into each other yields

The source is defined as →Js|Ω0=→ez/(πr20)fn(t) in the inner cable Ω0 and vanishes elsewhere, →ez denotes the unit vector in z-direction and the excitation is given by

Finally, the Ritz-Galerkin approach is employed with lowest order ansatz functions in space. When considering planar 2D problems, edge shape functions only have a z-component and can be constructed from the nodal shape functions Ni(→x) as

where lz refers to the length in z-direction, Ndof=2269. This leads to the equation

with the matrices and the right-hand side

respectively. The resulting system (6) consists of differential-algebraic equations of index-1 due the vanishing entries Mσ,i,j of the mass matrix Mσ in Ω0 and Ω1, Nicolet_1996aa .

The multigrid-reduction-in-time (MGRIT) algorithm Falgout_etal_2014 is an iterative, parallel method, based on applying multigrid reduction (MGR) MRies_UTrottenberg_1979 ; MRies_etal_1983 principles in time, for solving time-stepping problems of the form

with initial condition, g0, at t=t0. Note that form (7) can be a system of ODEs, arising, for example, after spatial discretization of a space-time PDE, or it can be a system of DAEs such as given in Equation (6). Discretizing the time interval on a grid ti=iΔt, i=0,1,…,Nt, with, for notational convenience, constant time step Δt=(tend−t0)/Nt>0, let ui be an approximation to u(ti) for i=1,…,Nt, and let u0=u(t0). Then, considering a one-step time-independent time integration method with time-stepping operator, ΦΔt, that takes a solution at time ti−1 to that at time ti, along with a time-dependent forcing term, gi, the solution to (7) is defined via time-stepping, which can also be represented as a forward solve of the linear system, written in block form as

Hence, in the time dimension, this forward solve is completely sequential.

for the value of the solution at every m-th temporal point, with consistently restricted forcing terms. Then define the solution at the remaining temporal points by local (and parallel) time-stepping between those points defined from the Schur complement. MGRIT is based on interpreting this cyclic reduction approach as a two-level MGR algorithm, enabling parallelism in the solution process (8). Therefore, define a coarse temporal mesh, or (using multigrid terminology) the set of C-points, to be those points included in the Schur complement system (9

), with the remaining temporal points as the set of F-points. Further define “ideal” interpolation as the map which takes the solution at the C-points and yields a zero residual at the F-points, with a similar definition for “ideal” restriction. The Schur complement then arises as the standard Petrov-Galerkin coarse-grid operator with these definitions of restriction and interpolation. Cyclic reduction can be viewed as a two-level method with this Petrov-Galerkin coarse-grid operator and a block smoother (called F-relaxation) that converges in one iteration. As it is typical in the MGR setting, the MGRIT approach replaces the true Schur complement with a simpler operator (typically of the same form as the original bidiagonal system, but with a time propagator using time-step

mΔt), replaces ideal restriction with simple injection, and compensates by adding relaxation. Furthermore, the two-level method can be extended to multiple levels in a simple recursive manner, and the full approximation storage (FAS) approach ABrandt_1977b can be used to accommodate nonlinear problems.

We apply classical sequential time stepping and two MGRIT variants to the eddy current model problem (3) with the pulsed excitation (4) on the space-time domain Ω×(0,0.2] s, with Ω=Ω0∪Ω1∪Ω2 depicted in Fig. 0(b). The spatial domain, Ω, is discretized using 2269degrees of freedom and the backward Euler method is used on a uniform grid with 32,768 time steps for the time derivative of the space-discrete time-stepping problem (6). The time step on the finest grid, l=0, is chosen to be Δt=6.1⋅10−6s, and the time step on each coarse grid, l, is given by mlΔt, l≥1. Two MGRIT variants are considered: a two-level Parareal-type method with a coarsening factor of m=256, and a five-level method that coarsens uniformly across all grids with a factor of m=4. Thus, the coarsest grid consists of 128 points in time in both cases. On this coarsest temporal grid, time stepping is used. All spatial problems are solved using a direct LU solver.

Fig. 3 shows convergence of the two MGRIT variants applied to the eddy current model problem. We see linear convergence for both variants. Comparing the number of spatial time-stepping solves required for the two methods to the optimal count of Nt for sequential time stepping, we note that one iteration requires about Nt or 2Nt spatial solves, respectively, when considering the two-level Parareal-type method or the five-level MGRIT scheme. This large computational overhead is demonstrated in the strong scaling results in Fig. 3. The dotted and solid lines show results for the two- and five-level methods, respectively, for increasing the number of processors in the temporal dimension only. The dashed line shows the runtime of time stepping on one processor for reference purposes. Results show that the extra work in the MGRIT variants can be effectively parallelized at high processor counts, i. e., more than 32, with good strong parallel scaling with a speedup of up to a factor of about 2.9 over sequential time stepping.

MGRIT was applied for the first time to the eddy current problem, which yields an index-1 DAE after spatial discretization. A speedup of approximately three times could be obtained. A strong scaling investigation shows that the method converges linearly with the number of processors, even for non-standard, pulsed right-hand sides, which has been shown to be problematic for classical Parareal Kulchytska-Ruchka_2018ac .

The work is supported by the Excellence Initiative of the German Federal and State Governments, the Graduate School of Computational Engineering at TU Darmstadt, and the BMBF in the framework of project PASIROM (grants 05M18RDA and 05M18PXB).