The audio-video based emotion recognition aims to classify a given video into basic emotions. In this paper, we describe our approaches in EmotiW 2019, which mainly explores emotion features and feature fusion strategies for audio and visual modality. For emotion features, we explore audio feature with both speech-spectrogram and Log Mel-spectrogram and evaluate several facial features with different CNN models and different emotion pretrained strategies. For fusion strategies, we explore intra-modal and cross-modal fusion methods, such as designing attention mechanisms to highlights important emotion feature, exploring feature concatenation and factorized bilinear pooling (FBP) for cross-modal feature fusion. With careful evaluation, we obtain 65.5 AFEW validation set and 62.48 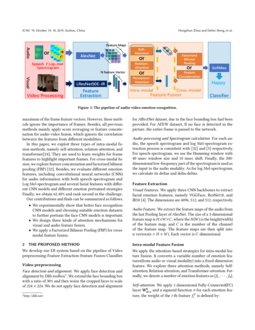 , audio-video emotion recognition in the wild remains a challenging problem due to the expression suffers from the large pose, illumination variance, occlusion, motion blur, etc.

, which includes four parts, namely Video preprocessing, Feature Extraction, Feature Fusion, and Classifier. Specifically, video preprocessing refers to extract the spectrogram of the audio, the faces or landmarks of video. Feature extraction and feature fusion respectively extracts emotion features from the audio or visual signal and fuses emotion features into compact feature vectors, which are subsequently fed into a classifier for prediction.

Many feature fusion strategies have been used in previous EmotiW challenges. (Fan et al., 2016; Vielzeuf et al., 2017; Lu et al., 2018) extract CNN-based frame features and use LSTM(Gers et al., 1999) or BLSTM(Graves and Schmidhuber, 2005) to fuse them. (Bargal et al., 2016; Knyazev et al., 2018; Liu et al., 2018) use Statistical encoding module to aggregate frame features which compute the mean, variance, minimum, and maximum of the frame feature vectors. However, these methods ignore the importance of frames. Besides, all previous methods mainly apply score averaging or feature concatenation for audio-video fusion, which ignores the correlation between the features from different modalities.

Our contributions and finds can be summarized as follows.

We apply face detection and alignment by Dlib toolbox111http://dlib.net/. We extend the face bounding box with a ratio of 30% and then resize the cropped faces to scale of 224×224. We do not apply face detection and alignment for AffectNet dataset, due to the face bounding box had been provided. For AFEW dataset, If no face is detected in the picture, the entire frame is passed to the network.

and a sigmoid function

σ for each emotion feature, the weight of the i-th feature fTi is defined by:

With these self-attention weights, we aggregate all the emotion features into a global representation fs as follows:

This attention module was designed to learn weights from the relationship between features. After the self-attention, features are aggregated into a single vectorfs. Since fs inherently contains global representation of these features, we use the sample concatenation of individual features and global represenation [fi:fs] to model the global-local relation. Similar to the Self-attention module, with individual emotion features, we apply 1-dimensional FC layer W1d×1 and a sigmoid function σ. The relation-attention weight of the i-th feautre [fi:fs]T is formulated as follows:

With Self-attention and Relation-attention weights, all the emotion features was convert into a new feature as follows:

With these transformer-attention weights, we aggregate all the emotion features into a single feature ft as follows:

We apply Factorized Bilinear Pooling(FBP) for cross-modal feature fusion. Given two features in different modalities,i.e. the audio feature vector a∈Rm for a spectrogram and visual feature v∈Rn for frame sequence, the simplest cross-modal bilinear model is defined as follows:

The implementation of Eq( 9) is illustrated in Fig2, where ~UTa and ~VTv are implemented by feeding feature a and v to FC layers, respectively, and the function SumPooling(x,k) applies sum pooling with non-overlapped windows to x. Besides, Dropout is adopted to prevent over-fitting. The l2-normalization (z←z/∥z∥) is used to normalize the energy of z to avoid the dramatical variation of the output magnitude, due to the introduced element-wise multiplication.

The human-annotated part of AffectNet dataset contains 287,651 training images and 4,000 test images, which are annotated with both emotion labels and arousal valence values. Only emotion labels are used in this task.

The FER+ dataset contains 28,709 training, 3,589 validation and 3,589 test images. We combine its training data with validation data for the training split and evaluate the model performance on the test data.

The AFEW contains 773 train, 383 val and 653 test samples, which are collected from movies and TV serials with spontaneous expressions, various poses, and illuminations.

We use the well-trained IR50 model to extract features and only train softmax classifier using these features. The IR50 models pre-trained on FER+, RAF-DB, and AffectNet achieve 50.13%, 51.436%, and 53.78%, respectively. Therefore, we choose the IR50 model pretrain on AffectNet as our visual features in the following fusion experiments.

We also use log Mel-spectrogram for audio CNN, which obtains a little better performance, but the final results are very similar after intra- and cross-modal fusion. Besides, the concatenation of audio and visual vectors gets 58% accuracy in AFEW validation set with transformer attention. This is 3% lower than FBP which shows the effectiveness of FBP.

, we first compute the Fast Fourier transform(FFT) of the Basic Feature, and then normalize the feature and concatenate the real and imaginary parts as

Table  3 shows that the five feature enhancement methods further improve the performance of FBP where the feature F-MeanStd achieves the best result on the validation set.

In the Table 4. The first three submitted models are trained on the training and validation set of AFEW, and the last two models are trained on the training set of AFEW. We find that it is difficult to choose models and fuse models if combining the validation set with the training set. We adopt class weight in all submissions, which means that we re-weight the predicted scores by the square root of the sample numbers([0.15, 0.097, 0.129, 0.185, 0.138, 0.082, 0.215]).

In this paper, we exploit three types of intra-modal fusion methods, namely self-attention, relation-attention, and transformer. They are mainly used to highlight important emotion feature. For the fusion of audio and visual information, we explore feature concatenation and factorized bilinear pooling (FBP). Besides, we evaluate different emotion features, including an audio feature with both speech-spectrogram and Log Mel-spectrogram and several facial features with different CNN models and different emotion pretrained strategies. With careful evaluation, we obtain 62.48% and rank second in the EmotiW 2019 Challenge.