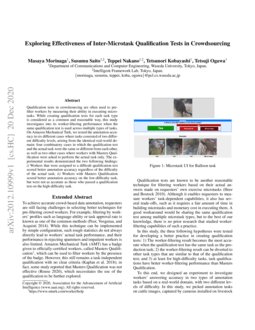 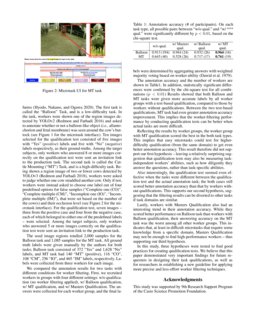 We study a crowdsourcing problem where the platform aims to incentivize ...
Chao Huang, et al. ∙

Crowdsourcing with Meta-Workers: A New Way to Save the Budget

Due to the unreliability of Internet workers, it's difficult to complete...
Guangyang Han, et al. ∙

In Search of Ambiguity: A Three-Stage Workflow Design to Clarify Annotation Guidelines for Crowd Workers

Biologists and scientists have been tackling the problem of marine life ...
Pushyami Kaveti, et al. ∙

We present and analyze results from a pilot study that explores how crow...
Travis Scheponik, et al. ∙

In this paper, we aim to gain a better understanding into how paid micro...
Oluwaseyi Feyisetan, et al. ∙

To achieve accurate crowd-based data annotation, requesters are still facing challenges in selecting better techniques for pre-filtering crowd workers. For example, filtering by workers’ profiles such as language ability or task approval rate is known as one of the common methods [5]. While this technique can be implemented by simple configuration, such rough statistics do not always directly lead to workers’ actual task performance, and their performance in rejecting spammers and impatient workers is also limited. Amazon Mechanical Turk (AMT) has a badge given to officially-certified workers, called Masters Qualification111https://www.mturk.com/worker/help, which can be used to filter workers by the presence of the badge. However, this still remains a task-independent qualification with no clear criteria [4]; in fact, some study reported that Masters Qualification was not effective [8], which necessitates the use of the qualification to be further explored.

Qualification tests are known to be another reasonable technique for filtering workers based on their actual answers made on requesters’ own exercise microtasks [2]. Although it enables requesters to measure workers’ task-dependent capabilities, it also has several trade-offs, such as it requires a fair amount of time in building microtasks and monetary cost in executing them. A good workaround would be sharing the same qualification test among multiple microtask types, but to the best of our knowledge, there is no prior research that studied worker-filtering capabilities of such a practice.

We compared the annotation results for two tasks with different conditions for worker filtering. First, we recruited workers in groups with four different settings: w/o qualification (no worker filtering applied), w/ Balloon qualification, w/ MT qualification, and w/ Masters Qualification. The answers were collected for each worker group, and the final labels were determined by aggregating answers with weighted majority voting based on worker ability [1].

The annotation accuracy and the number of workers are shown in Table1. In addition, statistically significant differences were confirmed by the chi-square test for all combinations (p<0.01) Results showed that both Balloon and MT tasks were given more accurate labels by all worker groups with a test-based qualification, compared to those by workers without qualifications. Between the two test-based qualifications, MT task had even greater annotation accuracy improvement. This implies that the worker-filtering performance by conducting qualification tests can be better when actual tasks are more difficult.

Reflecting the results by worker groups, the worker group with MT qualification scored the best in the both task types. This implies that easy microtasks could test for higher-difficulty qualification (from the same domain) to get even better annotation accuracy. This result therefore did not support our first hypothesis – leaving a relatively surprising suggestion that qualification tests may also be measuring task-independent workers’ abilities, such as how diligently they answer the questions, rather than task-specific abilities.

Lastly, workers with Masters Qualification also had an interesting trend in their annotation accuracy. While they scored better performance on Balloon task than workers with Balloon qualification, their answering accuracy on the MT task was the worst among all other worker groups. This indicates that, at least in difficult microtasks that require some knowledge from a specific domain, Masters Qualification may not be enough to find high-performance workers – thus supporting our third hypothesis.

In this study, three hypotheses were tested to find good practices for creating qualification tests. We believe that this paper demonstrated very important findings for future requesters in designing their task qualifications, as well as for researchers in establishing a new guideline for applying more precise and less-effort worker filtering techniques.

This study was supported by 9th Research Support Program of the Casio Science Promotion Foundation.