We consider empirical risk minimization of linear predictors with convex loss functions. Such problems can be reformulated as convex-concave saddle point problems, and thus are well suitable for primal-dual first-order algorithms. However, primal-dual algorithms often require explicit strongly convex regularization in order to obtain fast linear convergence, and the required dual proximal mapping may not admit closed-form or efficient solution. In this paper, we develop both batch and randomized primal-dual algorithms that can exploit strong convexity from data adaptively and are capable of achieving linear convergence even without regularization. We also present dual-free variants of the adaptive primal-dual algorithms that do not require computing the dual proximal mapping, which are especially suitable for logistic regression. 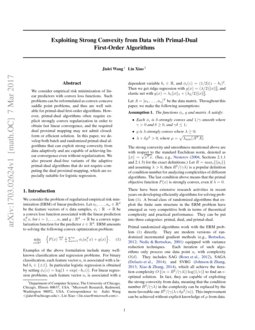 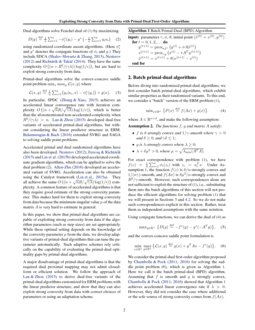 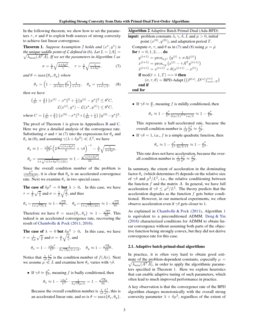 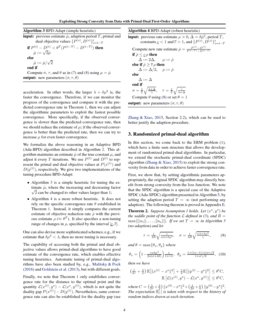 be the feature vectors of

n data samples, ϕi:R→R be a convex loss function associated with the linear prediction aTix, for i=1,…,n, and g:Rd→R be a convex regularization function for the predictor x∈Rd. ERM amounts to solving the following convex optimization problem:

Examples of the above formulation include many well-known classification and regression problems. For binary classification, each feature vector ai is associated with a label bi∈{±1}. In particular logistic regression is obtained by setting ϕi(z)=log(1+exp(−biz))

. Then we get ridge regression with

Let A=[a1,…,an]T be the data matrix. Throughout this paper, we make the following assumptions:

The functions ϕi, g and matrix A satisfy:

The strong convexity and smoothness mentioned above are with respect to the standard Euclidean norm, denoted as ∥x∥=√xTx. (See, e.g., Nesterov (2004, Sections 2.1.1 and 2.1.3) for the exact definitions.) Let R=maxi{∥ai∥} and assuming λ>0, then R2/(γλ) is a popular definition of condition number for analyzing complexities of different algorithms. The last condition above means that the primal objective function P(x) is strongly convex, even if λ=0.

There have been extensive research activities in recent years on developing efficiently algorithms for solving problem (1). A broad class of randomized algorithms that exploit the finite sum structure in the ERM problem have emerged as very competitive both in terms of theoretical complexity and practical performance. They can be put into three categories: primal, dual, and primal-dual.

equipped with variance reduction techniques. Each iteration of such algorithms only process one data point

ai with complexity O(d). They includes SAG (Roux et al., 2012), SAGA (Defazio et al., 2014), and SVRG (Johnson & Zhang, 2013; Xiao & Zhang, 2014), which all achieve the iteration complexity O((n+R2/(γλ))log(1/ϵ)) to find an ϵ-optimal solution. In fact, they are capable of exploiting the strong convexity from data, meaning that the condition number R2/(γλ) in the complexity can be replaced by the more favorable one R2/(γ(λ+δμ2/n)). This improvement can be achieved without explicit knowledge of μ from data.

using randomized coordinate ascent algorithms. (Here ϕ∗i and g∗ denotes the conjugate functions of ϕi and g.) They include SDCA (Shalev-Shwartz & Zhang, 2013), Nesterov (2012) and Richtárik & Takáč (2014). They have the same complexity O((n+R2/(γλ))log(1/ϵ)), but are hard to exploit strong convexity from data.

Accelerated primal and dual randomized algorithms have also been developed. Nesterov (2012), Fercoq & Richtárik (2015) and Lin et al. (2015b) developed accelerated coordinate gradient algorithms, which can be applied to solve the dual problem (2). Allen-Zhu (2016) developed an accelerated variant of SVRG. Acceleration can also be obtained using the Catalyst framework (Lin et al., 2015a). They all achieve the same O((n+√nR/√γλ)log(1/ϵ))

complexity. A common feature of accelerated algorithms is that they require good estimate of the strong convexity parameter. This makes hard for them to exploit strong convexity from data because the minimum singular value

μ of the data matrix A is very hard to estimate in general.

A major disadvantage of primal-dual algorithms is that the required dual proximal mapping may not admit closed-form or efficient solution. We follow the approach of Lan & Zhou (2015) to derive dual-free variants of the primal-dual algorithms customized for ERM problems with the linear predictor structure, and show that they can also exploit strong convexity from data with correct choices of parameters or using an adaptation scheme.

where A∈Rn×d, and make the following assumption:

The functions f, g and matrix A satisfy:

For exact correspondence with problem (1), we have f(z)=1n∑ni=1ϕi(zi) with zi=aTix. Under Assumption 1, the function f(z) is δ/n-strongly convex and 1/(nγ)-smooth, and f(Ax) is δμ2/n-strongly convex and R2/γ-smooth. However, such correspondences alone are not sufficient to exploit the structure of (1), i.e., substituting them into the batch algorithms of this section will not produce the efficient algorithms for solving problem (1) that we will present in Sections 3 and 4.2. So we do not make such correspondences explicit in this section. Rather, treat them as independent assumptions with the same notation.

Using conjugate functions, we can derive the dual of (4) as

and the convex-concave saddle point formulation is

We consider the primal-dual first-order algorithm proposed by Chambolle & Pock (2011, 2016) for solving the saddle point problem (6), which is given as Algorithm 1. Here we call it the batch primal-dual (BPD) algorithm. Assuming that f is smooth and g is strongly convex, Chambolle & Pock (2011, 2016) showed that Algorithm 1 achieves accelerated linear convergence rate if λ>0. However, they did not consider the case where additional or the sole source of strong convexity comes from f(Ax).

In the following theorem, we show how to set the parameters τ, σ and θ to exploit both sources of strong convexity to achieve fast linear convergence.

Suppose Assumption 2 holds and (x⋆,y⋆) is the unique saddle point of L defined in (6). Let L=∥A∥=√λmax(ATA). If we set the parameters in Algorithm 1 as

The proof of Theorem 1 is given in Appendices B and C. Here we give a detailed analysis of the convergence rate. Substituting σ and τ in (7) into the expressions for θy and θx in (8), and assuming γ(λ+δμ2)≪L2, we have

Since the overall condition number of the problem is L2γ(λ+δμ2), it is clear that θy is an accelerated convergence rate. Next we examine θx in two special cases.

Notice that 1γδL2μ2 is the condition number of f(Ax). Next we assume μ≪L and examine how θx varies with γδ.

As explained in Chambolle & Pock (2011), Algorithm 1 is equivalent to a preconditioned ADMM. Deng & Yin (2016) characterized conditions for ADMM to obtain linear convergence without assuming both parts of the objective function being strongly convex, but they did not derive convergence rate for this case.

In practice, it is often very hard to obtain good estimate of the problem-dependent constants, especially μ=√λmin(ATA), in order to apply the algorithmic parameters specified in Theorem 1

. Here we explore heuristics that can enable adaptive tuning of such parameters, which often lead to much improved performance in practice.

We formalize the above reasoning in an Adaptive BPD (Ada-BPD) algorithm described in Algorithm 2. This algorithm maintains an estimate ^μ of the true constant μ, and adjust it every T iterations. We use P(t) and D(t) to represent the primal and dual objective values at P(x(t)) and D(y(t)), respectively. We give two implementations of the tuning procedure BPD-Adapt:

One can also devise more sophisticated schemes; e.g., if we estimate that δμ2<λ, then no more tuning is necessary.

The capability of accessing both the primal and dual objective values allows primal-dual algorithms to have good estimate of the convergence rate, which enables effective tuning heuristics. Automatic tuning of primal-dual algorithms have also been studied by, e.g., Malitsky & Pock (2016) and Goldstein et al. (2013), but with different goals.

Finally, we note that Theorem 1 only establishes convergence rate for the distance to the optimal point and the quantity L(x(t),y⋆)−L(x⋆,y(t)), which is not quite the duality gap P(x(t))−D(y(t)). Nevertheless, same convergence rate can also be established for the duality gap (see Zhang & Xiao, 2015, Section 2.2), which can be used to better justify the adaption procedure.

In this section, we come back to the ERM problem (1), which have a finite sum structure that allows the development of randomized primal-dual algorithms. In particular, we extend the stochastic primal-dual coordinate (SPDC) algorithm (Zhang & Xiao, 2015) to exploit the strong convexity from data in order to achieve faster convergence rate.

First, we show that, by setting algorithmic parameters appropriately, the original SPDC algorithm may directly benefit from strong convexity from the loss function. We note that the SPDC algorithm is a special case of the Adaptive SPDC (Ada-SPDC) algorithm presented in Algorithm 5, by setting the adaption period T=∞ (not performing any adaption). The following theorem is proved in Appendix E.

Below we give a detailed discussion on the expected convergence rate established in Theorem 2.

Hence θ=θy. These recover the parameters and convergence rate of the standard SPDC (Zhang & Xiao, 2015).

The SPDC-Adapt procedure called in Algorithm 5 follows the same logics as the batch adaption schemes in Algorithms 3 and 4, and we omit the details here. One thing we emphasize here is that the adaptation period T

is in terms of epochs, or number of passes over the data. In addition, we only compute the primal and dual objective values after each pass or every few passes, because computing them exactly usually need to take a full pass of the data.

Another important issue is that, unlike the batch case where the duality gap usually decreases monotonically, the duality gap for randomized algorithms can fluctuate wildly. So instead of using only the two end values P(t−Tn)−D(t−Tn) and P(t)−D(t), we can use more points to estimate the convergence rate through a linear regression. Suppose the primal-dual values at the end of each past T+1 passes are

and we need to estimate ρ (rate per pass) such that

The rest of the adaption procedure can follow the robust scheme in Algorithm 4. In practice, we can compute the primal-dual values more sporadically, say every few passes, and modify the regression accordingly.

Compared with primal algorithms, one major disadvantage of primal-dual algorithms is the requirement of computing the proximal mapping of the dual function f∗ or ϕ∗i, which may not admit closed-formed solution or efficient computation. This is especially the case for logistic regression, one of the most popular loss functions used in classification.

Lan & Zhou (2015) developed “dual-free” variants of primal-dual algorithms that avoid computing the dual proximal mapping. Their main technique is to replace the Euclidean distance in the dual proximal mapping with a Bregman divergence defined over the dual loss function itself. We show how to apply this approach to solve the structured ERM problems considered in this paper. They can also exploit strong convexity from data if the algorithmic parameters are set appropriately or adapted automatically.

First, we consider the batch setting. We replace the dual proximal mapping (computing y(t+1)) in Algorithm 1 with

where D is the Bregman divergence of a strictly convex kernel function h, defined as

Algorithm 1 is obtained in the Euclidean setting with h(y)=12∥y∥2 and D(y,y(t))=12∥y−y(t)∥2. While our convergence results would apply for arbitrary Bregman divergence, we only focus on the case of using f∗ itself as the kernel, because this allows us to compute y(t+1) in (11) very efficiently. The following lemma explains the details (Cf. Lan & Zhou, 2015, Lemma 1).

The solution to (11) can be written as

where in the last equality we used the property of conjugate function when f is strongly convex and smooth. Moreover,

According to Lemma 1, we only need to provide initial points such that v(0)=(f∗)′(y(0)) is easy to compute. We do not need to compute (f∗)′(y(t)) directly for any t>0, because it is can be updated as v(t) in (12). Consequently, we can update y(t) in the BPD algorithm using the gradient f′(v(t)), without the need of dual proximal mapping. The resulting dual-free algorithm is given in Algorithm 6.

Lan & Zhou (2015) considered a general setting which does not possess the linear predictor structure we focus on in this paper, and assumed that only the regularization g is strongly convex. Our following result shows that dual-free primal-dual algorithms can also exploit strong convexity from data with appropriate algorithmic parameters.

Suppose Assumption 2 holds and let (x⋆,y⋆) be the unique saddle point of L defined in (6). If we set the parameters in Algorithm 6 as

Theorem 3 is proved in Appendices B and D. Assuming γ(λ+δμ2)≪L2, we have