Deep convolutional neural networks (CNNs) have shown state-of-the-art performances in various computer vision tasks. Advances on CNN architectures have focused mainly on designing convolutional blocks of the feature extractors, but less on the classifiers that exploit extracted features. In this work, we propose Split-and-Share Module (SSM),a classifier that splits a given feature into parts, which are partially shared by multiple sub-classifiers. Our intuition is that the more the features are shared, the more common they will become, and SSM can encourage such structural characteristics in the split features. SSM can be easily integrated into any architecture without bells and whistles. We have extensively validated the efficacy of SSM on ImageNet-1K classification task, andSSM has shown consistent and significant improvements over baseline architectures. In addition, we analyze the effect of SSM using the Grad-CAM visualization. 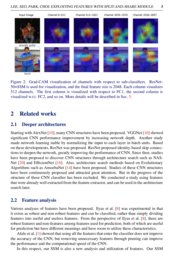 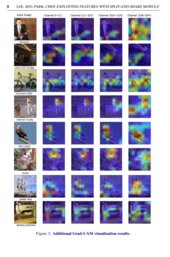 In this work, we propose a novel classifier, named Split-and-Share Module (SSM). SSM divides the given feature into several groups of channels, and the groups are partially shared among sub-classifiers. Each group of channels has different degree of sharing; and our intuition is that the mostly shared group will contain general features, and vice versa. This feature split-and-share method can encourage the diversity of the features by structure, and thus the diversity of the sub-classifiers, leading to higher performances when ensembled.

Figure 1 shows the structure of the proposed SSM. Given a feature vector extracted from the backbone network (feature extractor), SSM splits the feature into 4 groups and each group is fed into the designated sub-classifier. The final output is the sum of outputs from each sub-classifier. The smallest group, illustrated as the bottom group in Fig. 2, is shared by all other sub-classifiers, and should contribute to the final prediction alone. It is encouraged to learn more common and general features in the limited number of channels. On the other hand, the least shared channels, illustrated as the top group in Fig. 2, will learn additional features such as contextual information. The Grad-CAM [Selvaraju et al.(2017)Selvaraju, Cogswell, Das, Vedantam, Parikh, and Batra] visualization in Fig. 2 qualitatively supports our intuition. As shown in Fig. 2, the first column shows the acoustic guitar taken by Grad-CAM for each channel group. We can see that going down from the first row to the bottom row, starting with the additional characteristics of the acoustic guitar and gradually visualizing it as the core characteristic of the acoustic guitar. SSM shows stable performance improvement in architectures such as ResNet [He et al.(2016)He, Zhang, Ren, and Sun] and ResNeXt [Xie et al.(2017)Xie, Girshick, Dollár, Tu, and He], and is a simple structure consisting of BatchNorm [Ioffe and Szegedy(2015)]

and ReLU, easy to attach to any CNN architecture.

While the sub-classifiers may resemble the ensemble technique, which may lead to concerns on less improvements with ensemble. In our experiments, we show that a SSM-augmented network can further be improved with ensemble without any compromises.

Starting with AlexNet [Krizhevsky et al.(2012)Krizhevsky, Sutskever, and Hinton], many CNN structures have been proposed. VGGNet [Simonyan and Zisserman(2014)] showed significant CNN performance improvement by increasing network depth. Another study made network learning stable by normalizing the input to each layer in batch units. Based on these developments, ResNet was proposed. ResNet proposed identity-based skip connections to deepen the network, greatly improving the performance of CNN. Since then, studies have been proposed to discover CNN structures through architecture search such as NASNet [Zoph et al.(2018)Zoph, Vasudevan, Shlens, and Le] and EfficientNet [Tan and Le(2019)]

. Also, architecture search methods based on Evolutionary Algorithms such as AmoebaNet

[Real et al.(2019)Real, Aggarwal, Huang, and Le] have been proposed. Studies of these CNN structures have been continuously proposed and attracted great attention. But in the progress of the structure of these CNN classifier has been excluded. We conducted a study using features that were already well extracted from the feature extractor, and can be used in the architecture search later.

Afalo et al. [Aflalo et al.(2020)Aflalo, Noy, Lin, Friedman, and Zelnik] showed that using all the features that enter the classifier does not improve the accuracy of the CNN, but removing unnecessary features through pruning can improve the performance and the computational speed of the CNN.

In this respect, our SSM is also a new analysis and utilization of features. Our SSM forcibly assigns the role of features used for prediction through backprop, and qualitatively and quantitatively analyzes the effect on the network according to the location and number of such features.

In this section, we describe how SSM is formulated. SSM is a simple classifier that splits and share features with multiple sub-classifiers. The overall architecture of SSM is illustrated in Fig. 1, and the pseudo code algorithm is described in Algorithm 1.

First, SSM equally divides the input feature in 4 splits, and sequentially append the splits one-by-one to formulate 4 features with different numbers of channels. For example, given the feature F∈R2048, the first feature F1 contains the first 1/4 channels, i.e. F1=F[0:512]. Accordingly, F2 contains the first 1/2 channels, and so on. In order to diversify the 4 features while keeping the feature domain with minimum overheads, we apply BatchNorm with ReLU to the first 3 features for simple scaling and non-linear activation. The resulting 4 features will have the same semantic meaning with different scales for the shared channels. Channels in the 4 features can be zeroed out by ReLU. BatchNorm and ReLU are essential in SSM, as they add extra non-linearity to the overall process. Without BatchNorm and ReLU, SSM can be reduced to a simple linear combination (fully-connected) layer. After splitting, recombining and re-scaling, the 4 features are feed-forwarded to 4 sub-classifiers. Each sub-classifier is a simple fully-connected layer, where the output dimension is the number of classes. The final output of SSM is the average of the 4 outputs from the sub-classifiers.

The key intuition of our design is to partially share the given feature. The first 1/4 channels are shared among all sub-classifiers. These channels are forwarded 4 times and back-propagated 4 times. As they are most frequently used channels, we expect these channels are trained to be the most important key features. In contrast, the last 1/4 channels are used only by the last sub-classifier, so they are expected to contain some additional features, such as context information on the surrounding environments. We visualized the 4 splits of channels with the Grad-CAM visualization technique in Fig. 2 and Fig. 3, and more analysis will be discussed in Sec. 5.

In this section, we validate the efficacy of the proposed SSM on various architectures, and analyze the effect of SSM in several aspects. First, we use SSM upon ResNet and ResNeXt architectures in ImageNet-1K classification dataset [Deng et al.(2009)Deng, Dong, Socher, Li, Li, and Fei-Fei]. SSM has shown performance improvements in most cases, and details will be described in Sec. 4.1. In Sec. 4.2, we describe the ablation studies of SSM.

for network random initialization. We use SGD optimizer with base learning rate 0.1 and batch size of 256. The running rate is reduced by one-tenth at epoch 30 and 60, and the total number of epochs is 90.

The experiment result is summarized in  Table 1. SSM has consistently improved performance in all the architectures, except ResNet-18 that does not improve. The distinctive difference between ResNet-18 and other architectures is that the final feature of ResNet-18 has 512 channels, while others have 2048 channels. Therefore, we assume that the number of channels in the final feature should be large enough for SSM to be effective. In all architectures except ResNet-18, the performance improvement is significant. Furthermore, the absolute improvements in larger architectures are greater than the smaller ones. ResNet-101 improves 1.31% in the top-1 accuracy, while ResNet-50 improves 1.03%; ResNeXt-101 improves 1.22%, while ResNeXt-50 improves 0.77%.

4.2.3 Is the improvement simply due to parameter increases?

Finally, we show that the efficacy of SSM is not simply due to parameter increase. To verify this, we further train two models with more parameters by adding more parallel classifiers. As shown in Table 4, the base ResNet-50 has 25.55M parameters, and ResNet-50 + SSM has 28.58M parameter, so the parameter overhead is 3.03M. One fully connected layer has 2.05M parameters, so we add one or two parallel fully connected layers to the baseline ResNet-50. ResNet-50 (2FC) and ResNet-50 (3FC) are the new comparison methods that brings additional parameters in the classifier part, like SSM. The result is summarized in Table 4. A simple increase in parameters, like ResNet-50 (2FC) and (3FC), does not improves the performance much, but SSM does bring a significant improvement. Therefore, we argue that the performance improvement is not simply due to parameter increase, but due to the feature exploiting characteristics of SSM.

We experimented with how much performance improvement would be achieved by selecting the best inferred output of each output and using it for prediction in the ResNet-50+SSM structure learned from the training set of ImageNet-1K. We have not yet developed an algorithm to select the optimal FC, so we have selected the optimal FC by ourselves, utilizing the label data of ImageNet-1K. The result was that if FC could be ideally chosen, an additional 6% performance improvement could be seen with up to 82.9% performance. Further research on this part is believed to be possible.

We propose Split-and-Share Module (SSM). SSM is a classifier that improves the performance of CNN networks. We apply the BatchNorm and ReLU to the shared features extracted from the feature extractor, limiting the number of commonly used and non-featured backprops, and have an effect of learning by placing weights on important features. Through this process, features learned according to importance have a classifier suitable for their capacity, and averaging multiple outputs from the classifier for use in training and testing. We verified SSM by applying CNNs of various structures in ImageNet-1K, and showed significant performance improvement in all the experiments. We also adopted Grad-CAM for qualitative analysis of SSM. Grad-CAM results showed qualitatively that our SSM could learn according to the importance of features as we intended. In addition, SSM divides features into four groups and learns features that are common or non-common features, and these characteristics are thought to be available in many areas of research.