The task of event detection involves identifying and categorizing event triggers. Contextual information has been shown effective on the task. However, existing methods which utilize contextual information only process the context once. We argue that the context can be better exploited by processing the context multiple times, allowing the model to perform complex reasoning and to generate better context representation, thus improving the overall performance. Meanwhile, dynamic memory network (DMN) has demonstrated promising capability in capturing contextual information and has been applied successfully to various tasks. In light of the multi-hop mechanism of the DMN to model the context, we propose the trigger detection dynamic memory network (TD-DMN) to tackle the event detection problem. We performed a five-fold cross-validation on the ACE-2005 dataset and experimental results show that the multi-hop mechanism does improve the performance and the proposed model achieves best F_1 score compared to the state-of-the-art methods. 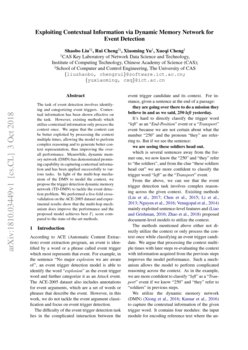 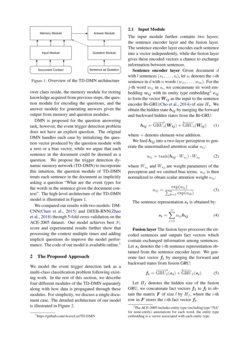 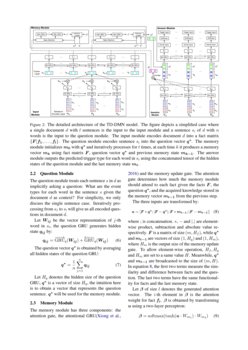 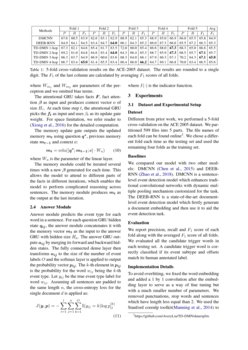 According to ACE (Automatic Content Extraction) event extraction program, an event is identified by a word or a phrase called event trigger which most represents that event. For example, in the sentence “No major explosion we are aware of”, an event trigger detection model is able to identify the word “explosion” as the event trigger word and further categorize it as an Attack event. The ACE-2005 dataset also includes annotations for event arguments, which are a set of words or phrases that describe the event. However, in this work, we do not tackle the event argument classification and focus on event trigger detection.

they are going over there to do a mission they believe in and as we said, 250 left yesterday.

left” as an “End-Position” event or a “Transport” event because we are not certain about what the number “250” and the pronoun “they” are referring to. But if we see the sentence:

we are seeing these soldiers head out.

which is several sentences away from the former one, we now know the “250” and “they” refer to “the soldiers”, and from the clue “these soldiers head out” we are more confident to classify the trigger word “left” as the “Transport” event.

The methods mentioned above either not directly utilize the context or only process the context once while classifying an event trigger candidate. We argue that processing the context multiple times with later steps re-evaluating the context with information acquired from the previous steps improves the model performance. Such a mechanism allows the model to perform complicated reasoning across the context. As in the example, we are more confident to classify “left” as a “Tranport” event if we know “250” and “they” refer to “soldiers” in previous steps.

DMN is proposed for the question answering task, however, the event trigger detection problem does not have an explicit question. The original DMN handles such case by initializing the question vector produced by the question module with a zero or a bias vector, while we argue that each sentence in the document could be deemed as a question. We propose the trigger detection dynamic memory network (TD-DMN) to incorporate this intuition, the question module of TD-DMN treats each sentence in the document as implicitly asking a question “What are the event types for the words in the sentence given the document context”. The high-level architecture of the TD-DMN model is illustrated in Figure

We compared our results with two models: DMCNNChen et al. (2015) and DEEB-RNNZhao et al. (2018) through 5-fold cross-validation on the ACE-2005 dataset. Our model achieves best F1 score and experimental results further show that processing the context multiple times and adding implicit questions do improve the model performance. The code of our model is available online.111https://github.com/AveryLiu/TD-DMN。

We model the event trigger detection task as a multi-class classification problem following existing work. In the rest of this section, we describe four different modules of the TD-DMN separately along with how data is propagated through these modules. For simplicity, we discuss a single document case. The detailed architecture of our model is illustrated in Figure 2.

Sentence encoder layer Given document d with l sentences (s1,…,sl), let si denotes the i-th sentence in d with n words (wi1,…,win). For the j-th word wij in si, we concatenate its word embedding wij with its entity type embedding222The ACE-2005 includes entity type (including type “NA” for none-entity) annotations for each word, the entity type embedding is a vector associated with each entity type. eij to form the vector Wij as the input to the sentence encoder Bi-GRUCho et al. (2014) of size Hs. We obtain the hidden state hij by merging the forward and backward hidden states from the Bi-GRU:

into a two-layer perceptron to generate the unnormalized attention scalar

where Ws1 and Ws2 are weight parameters of the perceptron and we omitted bias terms. uij is then normalized to obtain scalar attention weight αij:

The sentence representation si is obtained by:

Let Hf denotes the hidden size of the fusion GRU, we concatenate fact vectors f1 to fl to obtain the matrix F of size l by Hf, where the i-th row in F stores the i-th fact vector fi.

The question module treats each sentence s in d as implicitly asking a question: What are the event types for each word in the sentence s given the document d as context? For simplicity, we only discuss the single sentence case. Iteratively processing from s1 to sl will give us all encoded questions in document d.

Let Wij be the vector representation of j-th word in si, the question GRU generates hidden state qij by:

The question vector q∗ is obtained by averaging all hidden states of the question GRU:

Let Hq denotes the hidden size of the question GRU, q∗ is a vector of size Hq, the intuition here is to obtain a vector that represents the question sentence. q∗ will be used for the memory module.

The three inputs are transformed by:

where ; is concatenation. ∗, − and |.| are element-wise product, subtraction and absolute value respectively. F is a matrix of size (m,Hf), while q∗ and mt−1 are vectors of size (1,Hq) and (1,Hm), where Hm is the output size of the memory update gate. To allow element-wise operation, Hf,Hq and Hm are set to a same value H. Meanwhile, q∗ and mt−1 are broadcasted to the size of (m,H). In equation 8, the first two terms measure the similarity and difference between facts and the question. The last two terms have the same functionality for facts and the last memory state.

Let β of size l denotes the generated attention vector. The i-th element in β is the attention weight for fact fi. β is obtained by transforming u using a two-layer perceptron:

where Wm1 and Wm2 are parameters of the perceptron and we omitted bias terms.

where Wu is the parameter of the linear layer.

Answer module predicts the event type for each word in a sentence. For each question GRU hidden state qij, the answer module concatenates it with the memory vector mt as the input to the answer GRU with hidden size Ha. The answer GRU outputs aij by merging its forward and backward hidden states. The fully connected dense layer then transforms aij to the size of the number of event labels O

and the softmax layer is applied to output the probability vector

pij. The k-th element in pij is the probability for the word wij being the k-th event type. Let yij be the true event type label for word wij

. Assuming all sentences are padded to the same length

n, the cross-entropy loss for the single document d is applied as:

where I(⋅) is the indicator function.

Different from prior work, we performed a 5-fold cross-validation on the ACE 2005 dataset. We partitioned 599 files into 5 parts. The file names of each fold can be found online333https://github.com/AveryLiu/TD-DMN/data/splits. We chose a different fold each time as the testing set and used the remaining four folds as the training set.

To avoid overfitting, we fixed the word embedding and added a 1 by 1 convolution after the embedding layer to serve as a way of fine tuning but with a much smaller number of parameters. We removed punctuations, stop words and sentences which have length less equal than 2. We used the Stanford corenlp toolkitManning et al. (2014) to separate sentences. We down-sampled negative samples to ease the unbalanced classes problem.

The setting of the hyperparameters is the same for different hops of the TD-DMN model. We set

The performance of each model is listed in table 1. The first observation is that models using document context drastically outperform the model that only focuses on the sentence level feature, which indicates document context is helpful in event detection task. The second observation is that increasing number of hops improves model performance, this further implies that processing the context for multiple times does better exploit the context. The model may have exhausted the context and started to overfit, causing the performance drop at the fourth hop.

The performance of reference models is much lower than that reported in their original papers. Possible reasons are that we partitioned the dataset randomly, while the testing set of the original partition mainly contains similar types of documents and we performed a five-fold cross-validation.

3.3 The Impact of the Question Module

To reveal the effects of the question module, we ran the model in two different settings. In the first setting, we initialized the memory vector m0 and question vector q∗ with a zero vector, while in the second setting, we ran the model untouched. The results are listed in the table 2. The two models perform comparably under the 1-hop setting, this implies that the model is unable to distinguish the initialization values of the question vector well in the 1-hop setting. For higher number of hops, the untouched model outperforms the modified one. This indicates that with a higher number of memory iterations, the question vector q∗ helps the model to better exploit the context information. We still observe the increase and drop pattern of the F1 for the untouched model. However, such a pattern is not obvious with empty questions. This implies that we are unable to have a steady gain without the question module in this specific task.

In this work, we explored the TD-DMN architecture to exploit document context. Extending the model to include wider contexts across several similar documents may also be of interest. The detected event trigger information can be incorporated into question module when extending the TD-DMN to the argument classification problem. Other tasks with document context but without explicit questions may also benefit from this work.

In this paper, we proposed the TD-DMN model which utilizes the multi-hop mechanism of the dynamic memory network to better capture the contextual information for the event trigger detection task. We cast the event trigger detection as a question answering problem. We carried five-fold cross-validation experiments on the ACE-2005 dataset and results show that such multi-hop mechanism does improve the model performance and we achieved the best F1 score compared to the state-of-the-art models.