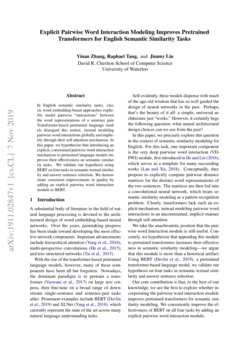 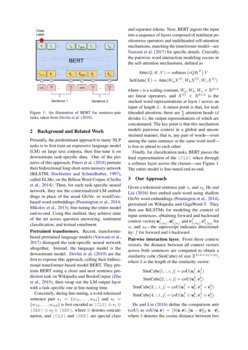 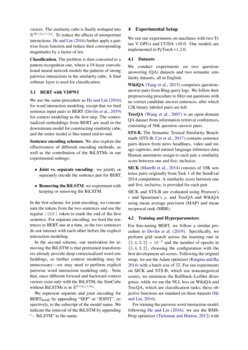 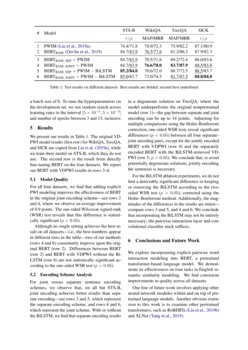 A substantial body of literature in the field of natural language processing is devoted to the architectural design of word embedding-based neural networks. Over the years, painstaking progress has been made toward developing the most effective network components. Important advancements include hierarchical attention

With the rise of the transformer-based pretrained language models, however, many of these components have been all but forgotten. Nowadays, the dominant paradigm is to pretrain a transformer Vaswani et al. (2017) on large text corpora, then fine-tune on a broad range of downstream single-sentence and sentence-pair tasks alike. Prominent examples include BERT Devlin et al. (2019) and XLNet Yang et al. (2019), which currently represent the state of the art across many natural language understanding tasks.

Self-evidently, these models dispense with much of the age-old wisdom that has so well guided the design of neural networks in the past. Perhaps, that’s the beauty of it all: a simple, universal architecture just “works.” However, it certainly begs the following question: what neural architectural design choices can we use from the past?

In this paper, we precisely explore this question in the context of semantic similarity modeling for English. For this task, one important component is the very deep pairwise word interaction (VDPWI) module, first introduced in He and Lin (2016), which serves as a template for many succeeding works Lan and Xu (2018)

. Conceptually, they propose to explicitly compute pairwise distance matrices for the distinct word representations of the two sentences. The matrices are then fed into a convolutional neural network, which treats semantic similarity modeling as a pattern recognition problem. Clearly, transformers lack such an explicit mechanism, instead modeling pairwise word interactions in an unconstrained, implicit manner through self-attention.

We take the anachronistic position that the pairwise word interaction module is still useful. Concretely, we hypothesize that appending this module to pretrained transformers increases their effectiveness in semantic similarity modeling—we argue that this module is more than a historical artifact. Using BERT Devlin et al. (2019), a pretrained transformer-based language model, we validate our hypothesis on four tasks in semantic textual similarity and answer sentence selection.

Presently, the predominant approach to many NLP tasks is to first train an expressive language model (LM) on large text corpora, then fine-tune it on downstream task-specific data. One of the pioneers of this approach, Peters et al. (2018)

Hochreiter and Schmidhuber, 1997), called ELMo, on the Billion Word Corpus Chelba et al. (2014). Then, for each task-specific neural network, they use the contextualized LM embeddings in place of the usual GloVe- or word2vec-based word embeddings Pennington et al. (2014); Mikolov et al. (2013), fine-tuning the entire model end-to-end. Using this method, they achieve state of the art across question answering, sentiment classification, and textual entailment.

Pretrained transformers. Recent, transformer-based pretrained language models Vaswani et al. (2017) disregard the task-specific neural network altogether. Instead, the language model is the downstream model. Devlin et al. (2019) are the first to espouse this approach, calling their bidirectional transformer-based model BERT. They pretrain BERT using a cloze and next sentence prediction task on Wikipedia and BooksCorpus Zhu et al. (2015), then swap out the LM output layer with a task-specific one at fine-tuning time.

Concretely, during fine-tuning, a word-tokenized sentence pair s1={w11,…,wn1} and s2={w12,…,wm2} is first encoded as [CLS]⊕s1⊕[SEP]⊕s2⊕[SEP], where ⊕ denotes concatenation, and [CLS] and [SEP] are special class and separator tokens. Next, BERT ingests the input into a sequence of layers composed of nonlinear positionwise operators and multiheaded self-attention mechanisms, matching the transformer model—see Vaswani et al. (2017) for specific details. Crucially, the pairwise word interaction modeling occurs in the self-attention mechanisms, defined as

where c is a scaling constant, Wq,Wk,Wv∈Rd×h are linear operators, and X(l)∈Rh×L is the stacked word representations at layer l across an input of length L. A minor point is that, for multiheaded attention, there are hd attention heads (d divides h), the output representations of which are concatenated. The key point is that this mechanism models pairwise context in a global and unconstrained manner; that is, any pair of words—even among the same sentence or the same word itself—is free to attend to each other.

Finally, for classification tasks, BERT passes the final representation of the [CLS]

token through a softmax layer across the classes—see Figure

1. The entire model is fine-tuned end-to-end.

, pretrained on Wikipedia and GigaWord-5. They then use BiLSTMs for modeling the context of input sentences, obtaining forward and backward context vectors

Pairwise interaction layer. From these context vectors, the distance between all context vectors across both sentences are computed to obtain a similarity cube (SimCube) of size R4×k×|s1|×|s2|, where k is the length of the similarity vector:

He and Lin (2016) define the comparison unit (coU) as coU(u,v)=[δ(u,v),∥u−v∥2,u⋅v], where δ denotes the cosine distance between two vectors. The similarity cube is finally reshaped into R4k×|s1|×|s2|. To reduce the effects of unimportant interactions, He and Lin (2016) further apply a pairwise focus function and reduce their corresponding magnitudes by a factor of ten.

Classification. The problem is then converted to a pattern recognition one, where a 19-layer convolutional neural network models the patterns of strong pairwise interactions in the similarity cube. A final softmax layer is used for classification.

We use the same procedure as He and Lin (2016) for word interaction modeling, except that we feed sentence input pairs to BERT Devlin et al. (2019) for context modeling as the first step. The contextualized embeddings from BERT are used in the downstream model for constructing similarity cube, and the entire model is fine-tuned end-to-end.

Sentence encoding schemes. We also explore the effectiveness of different encoding methods, as well as the contribution of the BiLSTMs in our experimental settings:

In the second scheme, our motivation for removing the BiLSTM is that pretrained transformers already provide deep contextualized word embeddings, so further context modeling may be unnecessary—we may need to perform explicit pairwise word interaction modeling only. Note that, since different forward and backward context vectors exist only with the BiLSTM, the SimCube without BiLSTMs is in Rk×|s1|×|s2|.

We represent separate and joint encoding for BERTBASE by appending “SEP” or “JOINT”, respectively, to the subscript of the model name. We indicate the removal of the BiLSTM by appending “− BiLSTM” to the name.

We run our experiments on machines with two Titan V GPUs and CUDA v10.0. Our models are implemented in PyTorch v1.2.0.

We conduct experiments on two question-answering (QA) datasets and two semantic similarity datasets, all in English:

WikiQA Yang et al. (2015) comprises question–answer pairs from Bing query logs. We follow their preprocessing procedure to filter out questions with no correct candidate answer sentences, after which 12K binary-labeled pairs are left.

SICK Marelli et al. (2014) consists of 10K sentence pairs originally from Task 1 of the SemEval 2014 competition. A similarity score between one and five, inclusive, is provided for each pair.

and the number of epochs in

{5,4,3,2}, choosing the configuration with the best development set scores. Following the original setup, we use the Adam optimizer Kingma and Ba (2014)

with a batch size of 32. For our experiments on SICK and STS-B, which use noncategorical scores, we minimize the Kullback–Leibler divergence, while we use the NLL loss on WikiQA and TrecQA, which are classification tasks; these objective functions are standard on these datasets

For training the pairwise word interaction model, following He and Lin (2016)

, we use the RMSProp optimizer

with a batch size of 8. To tune the hyperparameters on the development set, we run random search across learning rates in the interval

We present our results in Table 1. The original VDPWI model results (first row) for WikiQA, TrecQA, and SICK are copied from Liu et al. (2019a), while we train their model on STS-B, which they do not use. The second row is the result from directly fine-tuning BERT on the four datasets. We report our BERT with VDPWI results in rows 3–6.

For all four datasets, we find that adding explicit PWI modeling improves the effectiveness of BERT in the original joint encoding scheme—see rows 2 and 4, where we observe an average improvement of 0.9 points. The one-sided Wilcoxon signed-rank (WSR) test reveals that this difference is statistically significant (p<0.05).

Although no single setting achieves the best result on all datasets—i.e., the best numbers appear in different rows in the table—two of our methods (rows 4 and 6) consistently improve upon the original BERT (row 2). Differences between BERT (row 2) and BERT with VDPWI without the BiLSTM (row 6) are not statistically significant according to the one-sided WSR test (p>0.05).

For joint versus separate sentence encoding schemes, we observe that, on all but STS-B, joint encoding achieves better results than separate encoding—see rows 3 and 5, which represent the separate encoding scheme, and rows 4 and 6, which represent the joint scheme. With or without the BiLSTM, we find that separate encoding results in a degenerate solution on TrecQA, where the model underperforms the original nonpretrained model (row 1)—the gap between separate and joint encoding can be up to 14 points. Adjusting for multiple comparisons using the Holm–Bonferroni correction, one-sided WSR tests reveal significant differences (p<0.05) between all four separate–joint encoding pairs, except for the jointly encoded BERT with VDPWI (row 4) and the separately encoded BERT with the BiLSTM-removed VDPWI (row 5; p>0.05). We conclude that, to avoid potentially degenerate solutions, jointly encoding the sentences is necessary.

For the BiLSTM ablation experiments, we do not find a detectably significant difference in keeping or removing the BiLSTM according to the two-sided WSR test (p>0.05

), corrected using the Holm–Bonferroni method. Additionally, the magnitudes of the differences in the results are minor—compare rows 3 and 5, and 4 and 6. We conclude that incorporating the BiLSTM may not be entirely necessary; the pairwise interaction layer and convolutional classifier stack suffices.

We explore incorporating explicit pairwise word interaction modeling into BERT, a pretrained transformer-based language model. We demonstrate its effectiveness on four tasks in English semantic similarity modeling. We find consistent improvements in quality across all datasets.

One line of future work involves applying other neural network modules within and on top of pretrained language models. Another obvious extension to this work is to examine other pretrained transformers, such as RoBERTa Liu et al. (2019b) and XLNet Yang et al. (2019).

This research was supported by the Natural Sciences and Engineering Research Council (NSERC) of Canada, and enabled by computational resources provided by Compute Ontario and Compute Canada.