Inspired by Stein's lemma, we derive two expressions for the joint moments of elliptical distributions. We use two different methods to derive E[X_1^2f(𝐗)] for any measurable function f satisfying some regularity conditions. Then, by applying this result, we obtain new formulae for expectations of product of normally distributed random variables, and also present simplified expressions of E[X_1^2f(𝐗)] for multivariate Student-t, logistic and Laplace distributions. 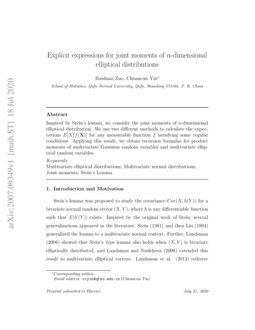 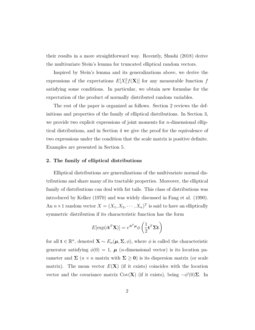 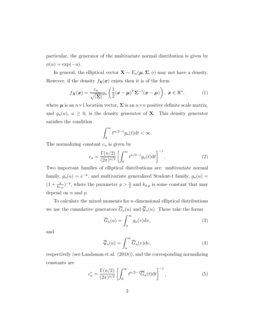 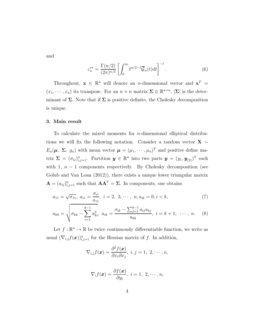 In this note, we derive the closed form formulae for moments of Student'...
J. Lars Kirkby, et al. ∙

The purpose of the present paper is to give unified expressions to the c...
Hua Dong, et al. ∙

The mixability of elliptical distributions with supermodular functions

The concept of ϕ-complete mixability and ϕ-joint mixability was first in...
Xiaoqian Zhang, et al. ∙

A Detailed Analysis of Quicksort Algorithms with Experimental Mathematics

In this paper, we propose a new class of distributions by exponentiating...
Bowen Liu, et al. ∙

for a bivariate normal random vector

(X,Y), where h is any differentiable function with finite extensions E|h′(Y)|. Inspired by the original work of Stein, several and generalizations have appeared in the literature. Liu (1994) generalized the lemma to the multivariate normal case, while Landsman (2006) showed that Stein’s type lemma also holds when (X,Y) is distributed as bivariate elliptical. This result got extended to multivariate elliptical vectors by Landsman and Neslehova (2008); see also Landsman et al.(2013) for a simple proof. Recently, Shushi (2018) derived the multivariate Stein’s lemma for truncated elliptical random vectors.

In this work, we derive expressions of the joint moments E[X21f(X)] for any measurable function f satisfying some regularity conditions. In particular, we obtain new formulae for the expectation of product of normally distributed random variables, and also present expressions of E[X21f(X)] for multivariate Student-t, logistic and Laplace distributions.

The rest of the paper is organized as follows. Section 2 reviews some definitions and properties of the family of elliptical distributions. Section 3 presents explicit expressions of joint moments of elliptical distributions by a direct method. Section 4 derives these joint moments by the use of Stein’s lemma. Section 5 shows the equivalence of the two expressions under the condition that the scale matrix is positive definite. Section 6 presents expression for expectation of products of correlated normal variables. Section 7 presents simplified results for the special cases of multivariate Student-t, logistic and Laplace distributions as illustrative examples of the general result established here. Finally, Section 8 gives some concluding remarks.

Elliptical distributions are generalizations of multivariate normal distribution and possess many novel tractable properties, in addition to allowing fat tails with suitably chosen keernels. This class of distributions was first introduced by Kelker (1970), and has been widely discussed in detail by Fang et al. (1990), and Kotz et al. (2000). A n×1 random vector X=(X1,⋯,Xn)T

for all t∈Rn, denoted X∼En(μ,Σ,ϕ), where ϕ is called the characteristic generator with ϕ(0)=1, μ (n-dimensional vector) is the location parameter, and Σ (n×n matrix with Σ≥0) is the dispersion matrix (or scale matrix). The mean vector E(X) (if it exists) coincides with the location vector and the covariance matrix Cov(X) (if it exists) is −ϕ′(0)Σ. The generator of the multivariate normal distribution, for example, is given by ϕ(u)=exp(−u).

In general, the elliptical vector X∼En(μ,Σ,ϕ) may not have a density function. However, if the density fX(x) exists, then it is of the form

and the normalizing constant cn is given by

To derive the mixed moments of elliptical distributions, we use the cumulative generators ¯¯¯¯Gn(u) and ¯¯¯Gn(u), which are given by

Throughout this paper, x∈Rn will denote an n-dimensional vector and xT=(x1,⋯,xn) its transpose. For an n×n matrix Σ∈Rn×n, |Σ| is the determinant of Σ. If Σ is positive definite, then its Cholesky decomposition is known to be unique.

Consider a random vector X∼En(μ, Σ, gn) with mean vector μ=(μ1,⋯,μn)T and positive define matrix Σ=(σij)ni,j=1. Partition y∈Rn into two parts as y=(y1,y(2))T each with 1 and n−1 components, respectively. By Cholesky decomposition (see Golub and Van Loan (2012), for example), there exists a unique lower triangular matrix A=(aij)ni,j=1 such that AAT=Σ. In terms of components, we have

Let f:Rn→R be a twice continuously differentiable function, and shall use (∇i,jf(x))ni,j=1 to denote the Hessian matrix of f. In addition, we denote

The following theorem gives an expression for joint moments of elliptical distributions.

From Corollary 1, we readily deduce the following relations for the special case of p1=3, for example:

4 Derivation by the use of Stein’s lemma

We now derive an expression for E[X21f(X)] by using Stein’s Lemma. It should be noted that the positive definiteness of Σ is not necessary in this case.

Suppose X∼En(μ,Σ,ϕ), and all the conditions of Theorem 1 hold. Then,

5 Equivalence of the two expressions

We shall now establish the equivalence of the two expressions in (1) and (2) under the condition that Σ is positive definite. For this purpose, we will use the following lemma; see, for example, Fang et al. (1990).

For any non-negative measurable function f:R→R+, we have

Under the conditions in Theorem 1, we have

where ϕ and ϕ∗ are the characteristic generating functions corresponding to the density generators gn and ¯¯¯¯Gn, respectively.

From Proposition 1, we find that, when Σ is a positive definite, the expressions in (1) and (2) are indeed equivalent. Moreover, for a positive semidefinite matrix Σ, we can rewrite (2) in terms of characteristic generators as follows:

where ϕ and ϕ∗ are the characteristic generators corresponding to the density generators gn and ¯¯¯¯Gn, respectively.

In general, for any p1≥2, we have the following recursive relation: