Our overarching goal is to develop an accurate and explainable model for plant disease identification using hyperspectral data. Charcoal rot is a soil borne fungal disease that affects the yield of soybean crops worldwide. Hyperspectral images were captured at 240 different wavelengths in the range of 383 - 1032 nm. We developed a 3D Convolutional Neural Network model for soybean charcoal rot disease identification. Our model has classification accuracy of 95.73% and an infected class F1 score of 0.87. We infer the trained model using saliency map and visualize the most sensitive pixel locations that enable classification. The sensitivity of individual wavelengths for classification was also determined using the saliency map visualization. We identify the most sensitive wavelength as 733 nm using the saliency map visualization. Since the most sensitive wavelength is in the Near Infrared Region(700 - 1000 nm) of the electromagnetic spectrum, which is also the commonly used spectrum region for determining the vegetation health of the plant, we were more confident in the predictions using our model. 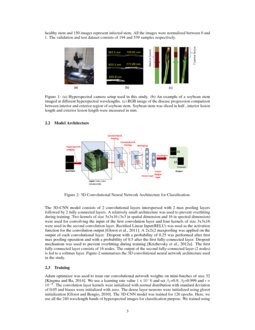 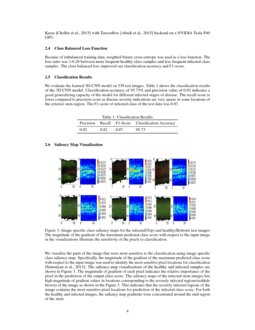 Deep Convolutional Neural Networks(CNN) have led to rapid developments in diverse applications such as object recognition, speech recognition, document reading and sentiment analysis within the industry and social media

(Krizhevsky et al., 2012b; Waibel et al., 1989; LeCun et al., 1998; Dos Santos and Gatti, 2014). Recently, 3D-CNN models have been used in classification of hyperspectral images for different objects of interest (Fotiadou et al., 2017; Chen et al., 2016; Li et al., 2017). But now that we are trying to leverage CNN’s for science applications, where simply prediction results will not be sufficient to trust the decision making of our model (Lipton, 2016). Therefore, we need interpretability methods for visualizing the information learnt by the model. There are many emerging techniques for interpreting CNN Montavon et al. (2017) and one of them is saliency map based visualization developed by (Simonyan et al., 2013). Here we show, an important science application of it in the domain of plant pathology.

(Hartman et al., 2015). However, today’s disease scouting and phenotyping techniques predominantly rely on human scouts and visual ratings. Human visual ratings are dependent on rater ability, rater reliability, and can be prone to human error, subjectivity, and inter/intra-rater variation (Bock et al., 2010). So there is a need for improved technologies for disease detection and identification beyond visual ratings in order to improve yield protection.

Charcoal rot is an important fungal disease for producers in the United States and Canada, ranking among the top 7 most severe diseases in soybean from 2006 - 2014 and as high as the 2nd most yield limiting soybean disease in 2012 (Allen et al., 2017; Koenning et al., 2010). Charcoal rot has a large host range affecting other important economic crops such as corn, cotton, and sorghum making crop rotation a difficult management strategy (Short et al., 1980; Su et al., 2001). However, both field scouting for disease detection and small scale methods of charcoal rot evaluation still rely on visual ratings. These field and greenhouse screening methods for charcoal rot are time consuming and labor intensive.

Unlike visual ratings which only utilize visible(400-700 nm) region wavelengths, hyperspectral imaging can capture spectral and spatial information from wavelengths beyond human vision offering more usable information for disease detection. Hyperspectral imaging has been used for the detection and identification of plant diseases in barley, sugar beet, and wheat among others (Bauriegel et al., 2011; Kuska et al., 2015; Mahlein et al., 2010)

. In addition, hyperspectral imaging offers a potential solution to the scalability and repeatability issues faced with human visual ratings. Because of large data dimensions and redundancy, machine learning based methods are well suited to convert hyperspectral data into actionable information

In this work, we develop a supervised 3D-CNN based model to learn the spectral and spatial information of hyperspectral images for classification of healthy and charcoal rot infected samples. A saliency map based visualization method is used to identify the hyperspectral wavelengths that are most sensitive for the classification. We infer the importance of the wavelengths by analyzing the magnitude of saliency map gradient distribution of the image across the hyperspectral wavelengths. To the best of our knowledge, this is the first work done on exploring the interpretation for the classification of hyperspectral data using saliency maps. This work is a societally relevant example of utilizing saliency maps to enable explanations of cues from hyperspectral data for disease identification. We are much more confident in the predictions of the model due to the physiologically meaningful explanations from the saliency visualization.

Healthy and infected soybean stem samples were collected at 3, 6, 9, 12, and 15 days after charcoal rot infection. Hyperspectral data cubes of the exterior of the infected and healthy stems were captured at each time point of data collection prior to disease progression length measurements. The hyperspectral imaging system consisted of a Pika XC hyperspectral line imaging scanner, including the imager mounted on a stand, a translational stage, a laptop with SpectrononPro software for operating the imager and translational stage during image collection (Resonon, Bozeman, MT), and two 70-watt quartz-tungsten-halogen Illuminator lamps (ASD Inc., Boulder, CO) to provide stable illumination over a 400 – 1000 nm range. The Pika XC Imager collects 240 wavebands over a spectral range from 400 – 1000 nm with a 2.5 nm spectral resolution. The hyperspectral camera setup used in this study is shown in Figure 1a. Figure 1b shows an example of soybean stem captured at different hyperspectral wavelengths. The disease spread length from top of the stem is available for all the infected stem images which were used the for ground truth labeling of image classes. A reddish-brown lesion was developed on the stem due to charcoal rot infection often progressing farther down the inside of the stem than visible on the exterior of the stem. Figure 1c shows the RGB image of the disease progression comparison between interior and exterior region of a soybean stem. The data-set contains 111 hyperspectral stem images of size 500x1600x240. Among the 111 images, 64 represent healthy stems and 47 represent infected stems. Data patches of resolution 64x64x240 pixels were extracted from the stem images. The 64x64x240 image patches were applied as input to the 3D-CNN model. The training dataset consists of 1090 images. Out of 1090 training images, 940 images represent healthy stem and 150 images represent infected stem. All the images were normalized between 0 and 1. The validation and test dataset consists of 194 and 539 samples respectively.

The 3D-CNN model consists of 2 convolutional layers interspersed with 2 max pooling layers followed by 2 fully connected layers. A relatively small architecture was used to prevent overfitting during training. Two kernels of size 3x3x16 (3x3 in spatial dimension and 16 in spectral dimension) were used for convolving the input of the first convolution layer and four kernels of size 3x3x16 were used in the second convolution layer. Rectified Linear Input(RELU) was used as the activation function for the convolution output

. The 3D-CNN model was trained for 126 epochs. Here, we use all the 240 wavelength bands of hyperspectral images for classification purpose. We trained using Keras

Because of imbalanced training data, weighted binary cross-entropy was used as a loss function. The loss ratio was 1:6.26 between more frequent healthy class samples and less frequent infected class samples. The class balanced loss improved our classification accuracy and F1-score.

We evaluate the learned 3D-CNN model on 539 test images. Table 1 shows the classification results of the 3D CNN model. Classification accuracy of 95.73% and precision value of 0.92 indicates a good generalizing capacity of the model for different infected stages of disease. The recall score is lower compared to precision score as disease severity indications are very sparse in some locations of the exterior stem region. The F1-score of infected class of the test data was 0.87.

We visualize the parts of the image that were most sensitive to the classification using image specific class saliency map. Specifically, the magnitude of the gradient of the maximum predicted class score with respect to the input image was used to identify the most sensitive pixel locations for classification (Simonyan et al., 2013). The saliency map visualizations of the healthy and infected samples are shown in Figure 3. The magnitude of gradient of each pixel indicates the relative importance of the pixel in the prediction of the output class score. The saliency maps of the infected stem images has high magnitude of gradient values in locations corresponding to the severely infected regions(reddish-brown) of the image as shown in the Figure 3. This indicates that the severely infected regions of the image contains the most sensitive pixel locations for prediction of the infected class score. For both the healthy and infected images, the saliency map gradients were concentrated around the mid region of the stem.

Let I1,I2,...IN be the N test images for disease classification. Let W be the gradient of the maximum predicted class score with respect to the input image. Each pixel (x,y) in the image Ii is maximally activated by one of the 240 wavelength channels. Let us assume that the element index of W corresponding to a pixel location (x,y) in wavelength channel C of a image Ii is g(x,y,C). For each pixel location (x,y) in image Ii, let C* be the wavelength with maximum magnitude of W across all channels.

Note, that C* is a function of (x,y). The histogram of C* from all pixel locations of the N test images is shown in Figure 4. It illustrates the percentage of pixel locations from all N test images with maximum saliency gradient magnitude from each wavelength. The importance of a specific hyperspectral wavelength can be quantified by the percentage of pixels with maximum saliency gradient magnitude in that wavelength. The histogram reveals several important aspects of our model. First, wavelength 733 nm (C*=130) from the near-infrared region was the most sensitive among all wavelengths in the test data. Second, the 15 wavelengths in the spectral region of 703 to 744 nm were responsible for maximum magnitude of gradient values in 33% of the pixel locations of the test image. Further, the wavelengths in the visible region of the spectrum (400-700 nm) were more sensitive for the infected samples compared to the healthy samples.

We have demonstrated that a 3D CNN model can effectively be used to learn the high dimensional hyperspectral data to identify charcoal rot disease in soybeans. We show that a saliency map visualization can be used to explain the importance of hyperspectral wavelengths in classification. Thus, using saliency map enabled interpretability, the model was able to track the physiological insights of the predictions. Hence, we are more confident of the predictive capability of our model. In future, band selection based on robust interpretability mechanisms will be helpful in dimensionality reduction of the large hyperspectral data and also in designing a multispectral camera system for high throughput phenotyping.