We study that the breakdown of epidemic depends on some parameters, that is expressed in epidemic reproduction ratio number. It is noted that when R_0 exceeds 1, the stochastic model have two different results. But, eventually the extinction will be reached even though the major epidemic occurs. The question is how long this process will reach extinction. In this paper, we will focus on the Markovian process of SIS model when major epidemic occurs. Using the approximation of quasi--stationary distribution, the expected mean time of extinction only occurs when the process is one step away from being extinct. Combining the theorm from Ethier and Kurtz, we use CLT to find the approximation of this quasi distribution and successfully determine the asymptotic mean time to extinction of SIS model without demography. 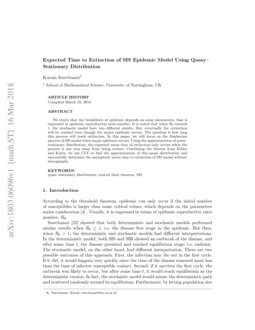 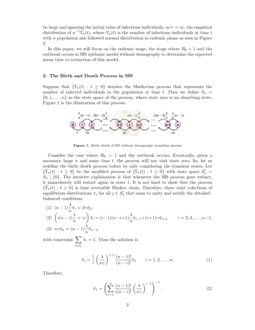 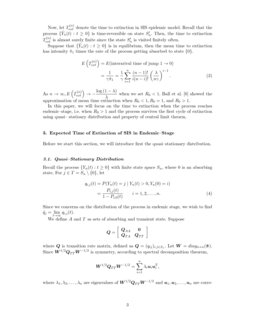 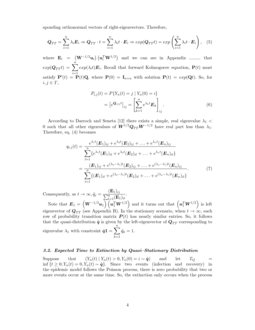 According to the threshold theorem, epidemic can only occur if the initial number of susceptibles is larger than some critical values, which depends on the parameters under cosideration [4] . Usually, it is expressed in terms of epidemic reproductive ratio number, R0.

Susvitasari [22] showed that both deterministic and stochastic models performed similar results when R0≤1, i.e. the disease–free stage in the epidemic. But then, when R0>1, the deterministic and stochastic models had different interpretations. In the deterministic model, both SIS and SIR showed an outbreak of the disease, and after some time t, the disease persisted and reached equilibrium stage, i.e. endemic. The stochastic model, on the other hand, had different interpretation. There are two possible outcomes of this approach. First, the infection may die out in the first cycle. If it did, it would happen very quickly since the time of the disease removed must less than the time of infectee–susceptible contact. Second, if it survives the first cycle, the outbreak was likely to occur, but after some time t, it would reach equilibrium as the deterministic version. In fact, the stochastic model would mimic the deterministic path and scattered randomly around its equilibrium. Furthermore, by letting population size be large and ignoring the initial value of infectious individuals, as t→∞, the empirical distribution of n−1Yn(t), where Yn(t) is the number of infectious individuals at time t with n

In this paper, we will focus on the endemic stage, the stage where R0>1 and the outbreak occurs in SIS epidemic model without demography to determine the expected mean time to extinction of this model.

2 The Birth and Death Process in SIS

Suppose that {Yn(t):t≥0} denotes the Markovian process that represents the number of infected individuals in the population at time t. Then we define Sn={0,1,…,n} as the state space of the process, where state zero is an absorbing state. Figure 1 is the illustration of this process.

Consider the case where R0>1 and the outbreak occurs. Eventually, given a necessary large n and some time t, the process will not visit state zero. So, let us redefine the birth–death process before by only considering the transient states. Let {^Yn(t):t≥0} be the modified process of {Yn(t):t≥0} with state space S′n=Sn∖{0}. The intuitive explaination is that whenever the SIS process goes extinct, it immediately will restart again in state 1. It is not hard to show that the process {^Yn(t):t≥0}

πj for all j∈S′n that sums to unity and satisfy the detailed–balanced conditions:

with constraint ∑i∈S′n^πi=1. Thus the solution is

Suppose that {^Yn(t):t≥0} is in equilibrium, then the mean time to extinction has intensity ^π1 times the rate of the process getting absorbed to state {0}.

In this paper, we will focus on the time to extinction when the process reaches endemic–stage, i.e. when R0>1 and the process survives the first cycle of extinction using quasi– statioary distribution and property of central limit theorm.

3 Expected Time of Extinction of SIS in Endemic–Stage

Before we start this section, we will introduce first the quasi–stationary distribution.

Since we concerns on the distribution of the process in endemic stage, we wish to find ~qj=limt→∞qi,j(t).

We define A and T as sets of absorbing and transient state. Suppose

where Q is transition rate matrix, defined as Q=(qij)i,j∈Sn. Let W=diagn×n(^π). Since W1/2QTTW−1/2 is symmetry, according to spectral decomposition theorem,

According to Darroch and Seneta [12] there exists a simple, real eigenvalue λ1<0 such that all other eigenvalues of W1/2QTTW−1/2 have real part less than λ1. Therefore, eq. (4) becomes

, each row of probability transition matrix

P(t) has nearly similar entries. So, it follows that the quasi-distribution ~q is given by the left-eigenvector of QTT corresponding to eigenvalue λ1 with constraint ~q1=n∑k=1~qk=1.

Suppose that (Yn(t)∣Yn(t)>0,Yn(0)=i∼~q) and let TQ=inf{t≥0;Yn(t)=0,Yn(t)∼~q}. Since two events (infection and recovery) in the epidemic model follows the Poisson process, there is zero probability that two or more events occur at the same time. So, the extinction only occurs when the process is one step away from being extinct. Therefore,

Recall that ~q is the left-eigenvector of QTT, corresponding to the eigenvalue λ1. So,

Since the process is Poisson process, then the inter arrival time must follow exponential distribution. Therefore, in eq. (

9), TQ follows exponential distribustion with intensity −λ1. But, recall the memoryless property of the Poisson process and that the extinction only occurs if the process is one step away from being extinct. Intuitively, it also means that the extinction happens with intensity ~q1 times the rate of the process to jump into absorption state 0, which is γ. On the other hand, λ1=−γ~q1 (note that λ1<0).

Using the fact that ~q is the left-eigenvector of QTT,

Therefore, the mean time to extinction of the SIS process is

The quasi–stationary is a very powerful approximation when we let population size large enough. Unfortunately, consider that by using this method, we need to capture all the possible transition rate for matrix Q. Considering the large n, the size of matrix Q will also big and leads to inefficient computation. Therefore, we should approximate the distribution of ~q1.

Now, suppose that we only concern on the size of infectious individuals in population when the outbreak occurs, i.e. {Yn(t)|Yn(t)>0,Yn(t)∼~q}. By ignoring the initial value of infectives, the empirical distribution of n−1Yn(t) follows normal distribution with mean converges to equilibrium point in deterministic model as seen in Figure 2. It turns out that by applying Central Limit Theorem, we could approximate the quantity of ~q1.

Further, let Φ(t,s), where 0≤s≤t, be the solution of the matrix differential equation

(Ethier and Kurtz) Suppose that

as n→∞, where {V(t):t≥0} is a zero–mean Gaussian process with covariance function given as

The functions Φ(t,s) and G(x) are as defined previously.

The proof of this theorem can be seen in Britton and Andersson [9] or in Ethier and Kurtz [14].

Note that the covarian function in equation (12

Note that in the epidemic case, when we let t→∞, d Sigma(t)dt tends to zero because if the epidemic survives and takes off, it will reach the endemic stage and the infection process converges to a certain distribution. Otherwise, if the epidemic dies out, we will see in the later section that the stable stage is reached in the disease-free stage. Both scenarios are in equilibrium level. Therefore, once one of these two cases is attained, dΣ(t)dt definitely goes to zero as t→∞.

Now let ^Σ and ^x be the variance-covariance matrix and the stationary infection point when the epidemic reaches endemic stage. Hence, as t→∞,

Suppose that R0>1 and {Yn(t):t≥0} is in quasi– equilibrium (meaning that Yn(t) enters endemic level). Then, the process will definitely mimic the deterministic model and with equilibrium point ^y=1−R−10.

for large n and large t.

Suppose that μn=(1−R−10)n and σ2n=nR0 for simpler notations. Let fn and Fn denote the pdf and cdf of N(μn,σ2n). Then using a continuity correction, we can approximate quasi-stationary distribution in (10) as follows

where ϕ(x) and Φ(x) are pdf and cdf of standardised normal distribution. Therefore, the approximate mean time to extinction of the SIS epidemic model by applying Theorem 4.1 is

for large n and large t.

We have successfully determined the approximation of expected mean time to extinction of SIS model using quasi–stationary distribution . An interesting result is that the empirical distribution of the SIS in endemic–stage followed normal distribution as the population size went to infinity. By using the CLT of Ethier and Kurtz, it turned out that the mean parameters of the SIS is the equilibrium points derived from solving deterministic’s ODE. This result was not surprising since we have showed in previous work that the stochastic models moved randomly around the deterministic model’s equilibrium point. Furthermore, the variances of the models converged to some positive constants since intuitively, as the population size went sufficiently large, the stochastic paths moved randomly around its endemic–equilibrium point.

Note that since ui is orthonormal, then

And secondly, we need to show that n∑i=1Ei=In×n.