Line spectral estimation (LSE) is a fundamental problem in signal processing fields, as it arises in various fields such as radar signal processing and communication fields. This paper develops expectation propagation (EP) based LSE (EPLSE) method. The proposed method automatically estimates the model order, noise variance, and can deal with the nonlinear measurements. Numerical experiments show the excellent performance of EPLSE. 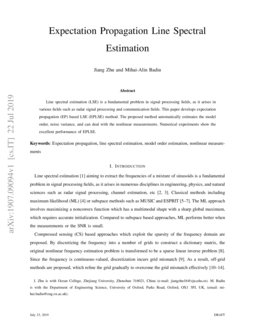 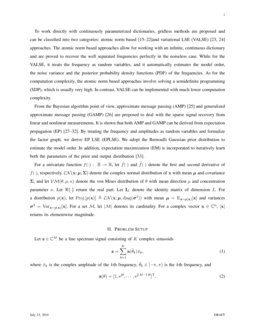 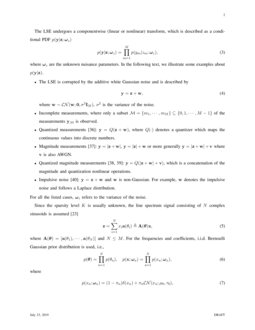 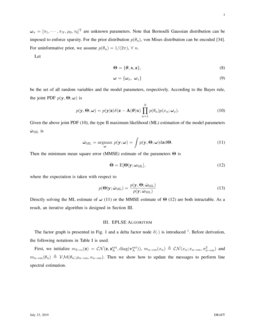 Line spectral estimation [1] aiming to extract the frequencies of a mixture of sinusoids is a fundamental problem in signal processing fields, as it arises in numerous disciplines in engineering, physics, and natural sciences such as radar signal processing, channel estimation, etc [2, 3]. Classical methods including maximum likelihood (ML) [4] or subspace methods such as MUSIC and ESPRIT [5, 6, 7]. The ML approach involves maximizing a nonconvex function which has a multimodal shape with a sharp global maximum, which requires accurate initialization. Compared to subspace based approaches, ML performs better when the measurements or the SNR is small.

Compressed sensing (CS) based approaches which exploit the sparsity of the frequency domain are proposed. By discretizing the frequency into a number of grids to construct a dictionary matrix, the original nonlinear frequency estimation problem is transformed to be a sparse linear inverse problem [8]. Since the frequency is continuous-valued, discretization incurs grid mismatch [9]. As a result, off-grid methods are proposed, which refine the grid gradually to overcome the grid mismatch effectively [10, 11, 12, 13, 14].

To work directly with continuously parameterized dictionaries, gridless methods are proposed and can be classified into two categories: atomic norm based

approaches. The atomic norm based approaches allow for working with an infinite, continuous dictionary and are proved to recover the well separated frequencies perfectly in the noiseless case. While for the VALSE, it treats the frequency as random variables, and it automatically estimates the model order, the noise variance and the posterior probability density functions (PDF) of the frequencies. As for the computation complexity, the atomic norm based approaches involve solving a semidefinite programming (SDP), which is usually very high. In contrast, VALSE can be implemented with much lower computation complexity.

. By treating the frequency and amplitudes as random variables and formalize the factor graph, we derive EP LSE (EPLSE). We adopt the Bernoulli Gaussian prior distribution to estimate the model order. In addition, expectation maximization (EM) is incorporated to iteratively learn both the parameters of the prior and output distribution

denote the complex normal distribution of

denote the identity matrix of dimension

denotes its cardinality. For a complex vector

The LSE undergoes a componentwise (linear or nonlinear) transform, which is described as a conditional PDF p(y|z;ωz)

where ωz are the unknown nuisance parameters. In the following text, we illustrate some examples about p(y|z).

For all the listed cases, ωz refers to the variance of the noise.

Since the sparsity level K is usually unknown, the line spectrum signal consisting of N complex sinusoids is assumed [23]

where A(θ)=[a(θ1),⋯,a(θN)] and N≤M. For the frequencies and coefficients, i.i.d. Bernoulli Gaussian prior distribution is used, i.e.,

are unknown parameters. Note that Bernoulli Gaussian distribution can be imposed to enforce sparsity. For the prior distribution

be the set of all random variables and the model parameters, respectively. According to the Bayes rule, the joint PDF p(y,Θ;ω) is

Given the above joint PDF (10), the type II maximum likelihood (ML) estimation of the model parameters ^ωML is

where the expectation is taken with respect to

Directly solving the ML estimate of ω (11) or the MMSE estimate of Θ (12) are both intractable. As a result, an iterative algorithm is designed in Section III.

for the generalized linear model (GLM), and a unified Bayesian inference framework for GLM was proposed.

. Before derivation, the following notations in Table I is used.

First, we initialize mδ→z(z)=CN(z,zextA,diag(vextA)), mn→m(xn)≜CN(xn;xn→m,σ2n→m) and mn→m(θn)≜VM(θn;μn→m,κn→m). Then we show how to update the messages to perform line spectral estimation.

Therefore Proj[qB(z)] is 222Note that for the linear measurement model y=z+w, we have Proj[qB(z)]=qB(z), i.e., the projection operation is unnecessary.

We also incorporate the expectation maximization (EM) algorithm to learn ωz. The posterior distribution of z is approximated as (17). We compute the expected complete log-likelihood function logp(y|z;ωz)+logp(z) with respect to p(z|y;ωoldz), and drop the irrelevant terms to have

Then ωz is updated as

For the AWGN model

For arbitrary p(y|z), we also obtain an approximate update equation. From the definition of mz→δ(z) and z=A(θ)x, we obtain an pseudo measurement model

The subfactor graph is presented in Fig. 3. According to EP, ~mm→n(θn) is updated as

where ~wm∼CN(~wm;0,~σ2m). Conditioned on θn, we approximate zm as a Gaussian distribution by averaging over {θl}l≠n and {xl}Nl=1. Straightforward calculation yields

which does not depend on θn and we use Var[zm] in the following text. Now we perform integration (III-B) with respect to zm. Conditioned on θn, by viewing

as the prior and likelihood of zm, respectively, we perform integration over zm to yield

Then we project fm(θn) as a von Mises distribution

As a result, using (III-B) we have

The subfactor graph is presented in Fig. 4.

Given that we do not have any knowledge of prior distribution p(θ), κn→m and μn→m is calculated to be

The subfactor graph is presented in Fig. 5. ~mm→n(xn) can be updated as

Similar to (III-B), eg(xn) can be equivalently formulated as

Conditioned on xn, we approximate zm as a Gaussian distribution by averaging over {xl}l≠n and {θl}Nl=1. Straightforward calculation yields

The subfactor graph is presented in Fig. 6. According to EP, mn→m(xn) is updated as