Example of a finite game with no Berge equilibria at all 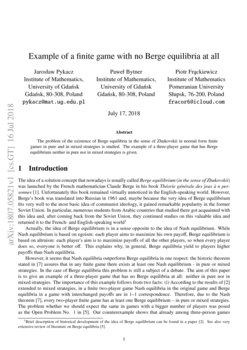 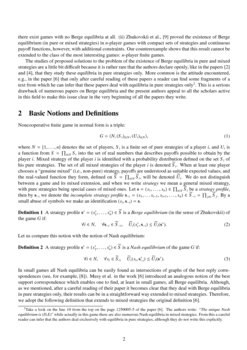 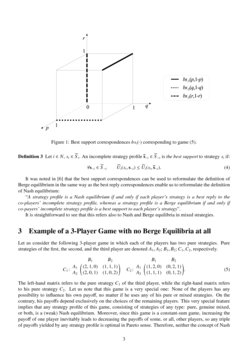 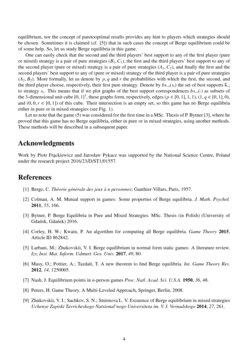 The idea of a solution concept that nowadays is usually called Berge equilibrium (in the sense of Zhukovskii) was launched by the French mathematician Claude Berge in his book Théorie générale des jeux à n personnes [1]. Unfortunately this book remained virtually unnoticed in the English-speaking world. However, Berge’s book was translated into Russian in 1961 and, maybe because the very idea of Berge equilibrium fits very well to the most basic idea of communist ideology, it gained remarkable popularity in the former Soviet Union. In particular, numerous students from Arabic countries that studied there got acquainted with this idea and, after coming back from the Soviet Union, they continued studies on this valuable idea and returned it to the French- and English-speaking world111Brief description of historical development of the idea of Berge equilibrium can be found in a paper [2]. See also very extensive review of literature on Berge equilibria [5].

Noncooperative finite game in normal form is a triple:

where N={1,…,n} denotes the set of players, Si is a finite set of pure strategies of a player i, and Ui is a function from S=∏i∈NSi into the set of real numbers that describes payoffs possible to obtain by the player i. Mixed strategy of the player i

is identified with a probability distribution defined on the set

Si of his pure strategies. The set of all mixed strategies of the player i is denoted ˜Si. When at least one player chooses a “genuine mixed” (i.e., non-pure) strategy, payoffs are understood as suitable expected values, and the real-valued function they form, defined on ˜S=∏i∈N˜Si, will be denoted ˜Ui. We do not distinguish between a game and its mixed extension, and when we write strategy we mean a general mixed strategy, with pure strategies being special cases of mixed ones. Let s=(s1,…,sn)∈∏i∈N˜Si be a strategy profile, then by s−i we denote the incomplete strategy profile s−i=(s1,…si−1,si+1,…,sn)∈˜S−i=∏j≠i˜Sj. By a small abuse of symbols we make an identification (si,s−i)=s.

A strategy profile s∗=(s∗1,…,s∗n)∈˜S is a Berge equilibrium (in the sense of Zhukovskii) of the game G if:

Let us compare this notion with the notion of Nash equilibrium:

A strategy profile s∗=(s∗1,…,s∗n)∈˜S is a Nash equilibrium of the game G if:

In small games all Nash equilibria can be easily found as intersections of graphs of the best reply correspondences (see, for example, [8]). Musy et al. in the work [6] introduced an analogous notion of the best support correspondence which enables one to find, at least in small games, all Berge equilibria. Although, as we mentioned, after a careful reading of their paper it becomes clear that they deal with Berge equilibria in pure strategies only, their results can be in a straightforward way extended to mixed strategies. Therefore, we adopt the following definition that extends to mixed strategies the original definition [6].

Let i∈N, si∈˜Si. An incomplete strategy profile ¯¯¯s−i∈˜S−i is the best support to strategy si if:

It is straightforward to see that this refers also to Nash and Berge equilibria in mixed strategies.

Let us consider the following 3-player game in which each of the players has two pure strategies. Pure strategies of the first, the second, and the third player are denoted A1,A2; B1,B2; C1,C2, respectively.

The left-hand matrix refers to the pure strategy C1 of the third player, while the right-hand matrix refers to his pure strategy C2. Let us note that this game is a very special one: None of the players has any possibility to influence his own payoff, no matter if he uses any of his pure or mixed strategies. On the contrary, his payoffs depend exclusively on the choices of the remaining players.

This very special feature implies that any strategy profile of this game, consisting of strategies of any type: pure, genuine mixed, or both, is a (weak) Nash equilibrium. Moreover, since this game is a constant-sum game, increasing the payoff of one player inevitably leads to decreasing the payoffs of some, or all, other players, so any triple of payoffs yielded by any strategy profile is optimal in Pareto sense. Therefore, neither the concept of Nash equilibrium, nor the concept of paretooptimal results provides any hint to players which strategies should be chosen. Sometimes it is claimed (cf. [5]) that in such cases the concept of Berge equilibrium could be of some help. So, let us study Berge equilibria in this game.

Let us note that the game (5) was considered for the first time in a MSc. Thesis of P. Bytner [3], where he proved that this game has no Berge equilibria, either in pure or in mixed strategies, using another methods. These methods will be described in a subsequent paper.

Work by Piotr Fra̧ckiewicz and Jarosław Pykacz was supported by the National Science Centre, Poland under the research project 2016/23/D/ST1/01557.