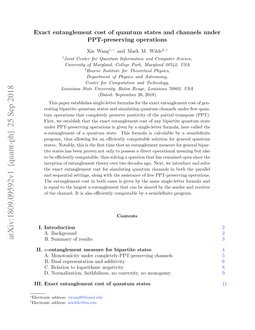 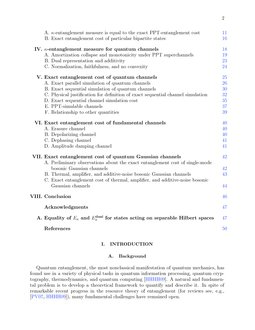 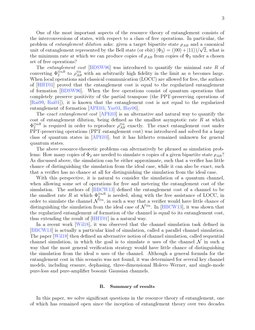 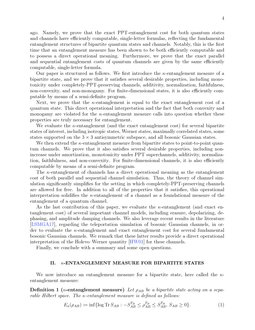 Quantum entanglement, the most nonclassical manifestation of quantum mechanics, has found use in a variety of physical tasks in quantum information processing, quantum cryptography, thermodynamics, and quantum computing Horodecki2009a . A natural and fundamental problem is to develop a theoretical framework to quantify and describe it. In spite of remarkable recent progress in the resource theory of entanglement (for reviews see, e.g., Plenio2007 ; Horodecki2009a ), many fundamental challenges have remained open.

i.2 Summary of results

Our paper is structured as follows. We first introduce the κ-entanglement measure of a bipartite state, and we prove that it satisfies several desirable properties, including monotonicity under completely-PPT-preserving channels, additivity, normalization, faithfulness, non-convexity, and non-monogamy. For finite-dimensional states, it is also efficiently computable by means of a semi-definite program.

We evaluate the κ-entanglement (and the exact entanglement cost) for several bipartite states of interest, including isotropic states, Werner states, maximally correlated states, some states supported on the 3×3 antisymmetric subspace, and all bosonic Gaussian states.

We then extend the κ-entanglement measure from bipartite states to point-to-point quantum channels. We prove that it also satisfies several desirable properties, including non-increase under amortization, monotonicity under PPT superchannels, additivity, normalization, faithfulness, and non-convexity. For finite-dimensional channels, it is also efficiently computable by means of a semi-definite program.

As the last contribution of this paper, we evaluate the κ-entanglement (and exact entanglement cost) of several important channel models, including erasure, depolarizing, dephasing, and amplitude damping channels. We also leverage recent results in the literature LMGA17 , regarding the teleportation simulation of bosonic Gaussian channels, in order to evaluate the κ-entanglement and exact entanglement cost for several fundamental bosonic Gaussian channels. We remark that these latter results provide a direct operational interpretation of the Holevo–Werner quantity HW01 for these channels.

Finally, we conclude with a summary and some open questions.

Let ρAB be a bipartite state acting on a separable Hilbert space. The κ-entanglement measure is defined as follows:

In the case that the state ρAB acts on a finite-dimensional Hilbert space, then Eκ(ρAB) is calculable by a semi-definite program, and thus it is efficiently computable with respect to the dimension of the Hilbert space.

Let ρAB be a quantum state acting on a separable Hilbert space, and let {PxAB→A′B′}x be a set of completely positive, trace non-increasing maps that are each completely PPT-preserving, such that the sum map ∑xPxAB→A′B′ is quantum channel. Then the following entanglement monotonicity inequality holds

Proof.  Let SAB be such that

which reduces to the following for all x such that p(x)>0:

Furthermore, since SAB≥0 and PxAB→A′B′ is completely positive, we conclude the following for all x such that p(x)>0:

The inequality in (3) is a special case of that in (2), in which the set {PxAB→A′B′}x is a singleton, consisting of a single completely-PPT-preserving quantum channel. ■

The optimization problem dual to Eκ(ρAB) in Definition 1 is as follows:

For all finite-dimensional states ρAB, strong duality holds, so that

This follows as a consequence of Slater’s theorem.

By employing the strong duality equality in (14) for the finite-dimensional case, along with the approach from FAR11 , we conclude that the following equality holds for all bipartite states ρAB acting on a separable Hilbert space:

We provide an explicit proof of (15) in Appendix A.

Both the primal and dual SDPs for Eκ are important, as the combination of them allows for proving the following additivity of Eκ

with respect to tensor-product states.

Proof.  From Definition 1, we can write Eκ(ρAB) as

Since the inequality holds for all SAB and RA′B′ satisfying the constraints above, we conclude that

To see the super-additivity of Eκ, i.e., the opposite inequality, let {V1AB,W1AB} and {V2A′B′,W2A′B′} be arbitrary operators satisfying the conditions in (12) for ρAB and ωA′B′, respectively. Now we choose

Since the inequality has been shown for arbitrary {V1AB,W1AB} and {V2A′B′,W2A′B′} satisfying the conditions in (12) for ρAB and ωA′B′, respectively, we conclude that

The following proposition establishes an inequality relating Eκ to the logarithmic negativity Vidal2002 ; Plenio2005b , defined as

Let ρAB be a bipartite state acting on a separable Hilbert space. Then

Proof.  Consider from the dual formulation of Eκ(ρAB) in (12) that

Using the fact that the transpose map is its own adjoint, we have that

Then by a substitution, we can write this as

Consider a decomposition of ρTBAB into its positive and negative part

Furthermore, we have for this choice that

If ρAB satisfies the binegativity condition |ρTBAB|TB≥0, then we pick SAB=|ρTBAB| in (1) and conclude that

Let ΦMAB be a maximally entangled state of Schmidt rank M. Then

Furthermore, for any bipartite state ρAB, the following bound holds

where dA and dB denote the dimensions of systems A and B, respectively.

where FAB is the unitary swap operator, such that FAB=ΠSAB−ΠAAB, with ΠSAB and ΠAAB the respective projectors onto the symmetric and antisymmetric subspaces. Thus, by Proposition 3, it follows that

To see (48), let us suppose without loss of generality that dA≤dB. Given the bipartite state ρAB, Bob can first locally prepare a state ρAB and teleport the A system to Alice using a maximally entangled state ΦdA shared with Alice, which implies that there exists a completely-PPT-preserving channel that converts ΦdA to ρAB. Therefore, by the monotonicity of Eκ with respect to completely-PPT-preserving channels (Theorem 1), we find that

This concludes the proof. ■

For a state ρAB acting on a separable Hilbert space, we have that Eκ(ρAB)≥0 and Eκ(ρAB)=0 if and only if ρTBAB≥0.

Finally, suppose that Eκ(ρAB)=0. Then, by Proposition 3, EN(ρAB)=0, so that ∥∥ρTBAB∥∥1=1. Decomposing ρTBAB into positive and negative parts as ρTBAB=P−N (such that P,N≥0 and PN=0), we have that 1=TrρAB=TrρTBAB=TrP−TrN. But we also have by assumption that 1=∥∥ρTBAB∥∥1=TrP+TrN. Subtracting these equations gives TrN=0, which implies that N=0. From this, we conclude that ρTBAB=P≥0. ■

The κ-entanglement measure is not generally convex.

Proof.  Due to Proposition 3

Ishizaka2004a , the non-convexity of Eκ boils down to finding a two-qubit example for which the logarithmic negativity is not convex. In particular, let us choose the two-qubit states ρ1=Φ2, ρ2=12(|00⟩⟨00|+|11⟩⟨11|), and their average ρ=12(ρ1+ρ2). By direct calculation, we obtain

which concludes the proof. ■

If an entanglement measure E is monogamous CKW00 ; T04 ; KWin04 , then the following inequality should be satisfied for all tripartite states ρABC:

The κ-entanglement measure is not generally monogamous.

Proof.  Consider a state |ψ⟩⟨ψ|ABC of three qubits, where

Due the fact that |ψ⟩ABC can be written as

This concludes the proof. ■

In this section, we prove that the κ-entanglement of a bipartite state is equal to its exact entanglement cost, when completely-PPT-preserving channels are allowed for free. After doing so, we evaluate the exact entanglement cost of several key examples of interest: isotropic states, Werner states, maximally correlated states, some states supported on the 3×3 antisymmetric subspace, and bosonic Gaussian states. In particular, we conclude that the resource theory of entanglement (the exact PPT case) is irreversible by evaluating the max-Rains relative entropy of WD16pra and Eκ and showing that there is a gap between them.

Let Ω represent a set of free operations, which can be either LOCC or PPT. The one-shot exact entanglement cost of a bipartite state ρAB, under the Ω operations, is defined as

where Φd^A^B=[1/d]∑di,j=1|ii⟩⟨jj|^A^B represents the standard maximally entangled state of Schmidt rank d. The exact entanglement cost of a bipartite state ρAB, under the Ω operations, is defined as

In Audenaert2003 , the following bounds were given for EPPT:

the lower bound being the logarithmic negativity recalled in (29), and the upper bound defined as

Due to the presence of the dimension factor dim(ρAB), the upper bound in (63) clearly only applies in the case that ρAB is finite-dimensional.

Let ρAB be a bipartite state acting on a separable Hilbert space. Then the one-shot exact PPT-entanglement cost E(1)PPT(ρAB) is given by the following optimization:

Proof.  The achievability part features a construction of a completely-PPT-preserving channel P^A^B→AB such that P^A^B→AB(Φm^A^B)=ρAB, and then the converse part demonstrates that the constructed channel is essentially the only form that is needed to consider for the one-shot exact PPT-entanglement cost task. The achievability part directly employs some insights of Audenaert2003 , while the converse part directly employs insights of Matthews2008 . In what follows, we give a proof for the sake of completeness.

Then we take the completely-PPT-preserving channel P^A^B→AB to be as follows:

The action of P^A^B→AB can be understood as a measure-prepare channel (and is thus a channel): first perform the measurement {Φm^A^B,1^A^B−Φm^A^B}, and if the outcome Φm^A^B occurs, prepare the state ρAB, and otherwise, prepare the state GAB. To see that the channel P^A^B→AB is a completely-PPT-preserving channel, we now verify that the map TB∘P^A^B→AB∘T^B is completely positive. Let YRA^A^BRB be a positive semi-definite operator with RA isomorphic to ^A and RB isomorphic to ^B. Then consider that