The permutation test is known as the exact test procedure in statistics. However, often it is not exact in practice and only an approximate method since only a small fraction of every possible permutation is generated. Even for a small sample size, it often requires to generate tens of thousands permutations, which can be a serious computational bottleneck. In this paper, we propose a novel combinatorial inference procedure that enumerates all possible permutations combinatorially without any resampling. The proposed method is validated against the standard permutation test in simulation studies with the ground truth. The method is further applied in twin DTI study in determining the genetic contribution of the minimum spanning tree of the structural brain connectivity. 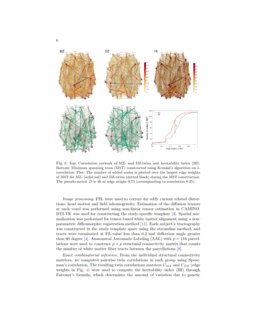 Generalizations to the permutation test are introduced to allow for situ...
Jeffrey Roach, et al. ∙

Permutation inference with a finite number of heterogeneous clusters

The permutation test is perhaps the most widely used nonparametric test procedure in sciences [1, 7, 10]

. It is known as the exact test in statistics since the distribution of the test statistic under the null hypothesis can be exactly computed if we can calculate all possible values of the test statistic under every possible permutation. Unfortunately, generating every possible permutation for whole images is still extremely time consuming even for modest sample size.

In this paper, we propose a novel combinatorial inference procedure that enumerates all possible permutations combinatorially and simply avoids resampling that is slow and approximate. Unlike the permutation test that takes few hours to few days in a desktop, our exact procedure takes few seconds. Recently combinatorial approaches for statistical inference are emerging as an powerful alternative to existing statistical methods [5, 1]. Neykov et al. proposed a combinatorial technique for graphical models. However, their approach still relies on bootstrapping, which is another resampling technique and still approximate [5]. Chung et al. proposed another combinatorial approach for brain networks but their method is limited to integer-valued graph features [1]. Our main contributions of this paper are as follows.

1) A new combinational approach for the permutation test that does not require resampling. While the permutation tests require exponential run time and approximate [1], our combinatorial approach requires O(n2) run time and exact. 2) Showing that the proposed method is a more sensitive and powerful alternative to the existing permutation test through extensive simulation studies. 3) A new formulation for testing the brain network differences by using the minimum spanning tree differences. The proposed framework is applied to a twin DTI study in determining the heritability of the structural brain network.

The method in this paper extends our previous exact topological inference [1], which is limited to integer-valued monotone functions from graphs. Through Theorem 2.1, we extend the method to any arbitrary monotone function.

For any sets G1 and G2 satisfying G1⊂G2, function f is strictly monotone if it satisfies f(G1)<f(G2). ⊂ denotes the strict subset relation.

Let f be a monotone function on the nested set G1⊂G2⊂⋯⊂Gq. Then there exists a nondecreasing function ϕ such that ϕ∘f(Gj)=j.

Proof. We prove the statement by actually constructing such a function. Function ϕ is constructed as follows. Let xj=f(Gj). Then obviously x1<x2<⋯<xq. Define an increasing step function ϕ such that

The step function ϕ is illustrated in Figure 1. Then it is straightforward to see that ϕ∘f(Gj)=j for all 1≤j≤q. Further ϕ is nondecreasing. □

Consider two nested sets F1⊂F2⊂⋯⊂Fq and G1⊂G2⊂⋯⊂Gq. We are interested in testing the null hypothesis H0 of the equivalence of two monotone functions defined on the nested sets:

We have nondecreasing functions ϕ and ψ on f(Fj) and g(Gj) respectively that satisfies the condition Theorem 2.1. We use psudo-metric

as a test statistic that measures the similarity between two monotone functions. The use of maximum removes the problem of multiple comparisons. The distribution of Dq can be determined by combinatorially.

. The probability is then

P(D3≥2)=1−8/(63)=0.6. The computational complexity of the combinatorial inference is O(q2) for computing Aq,q in the grid while the permutation test is exponential.

As a specific example of how to apply the method, we show how to test for shape differences in minimum spanning trees (MST) of graphs. MST are often used in speeding up computation and simplifying complex graphs as simpler trees [9]. We et al. used MST in edge-based segmentation of lesion in brain MRI [9]. Stam et al. used MST as an unbiased skeleton representation of complex brain networks [6]

. Existing statistical inference methods on MST rely on using graph theory features on MST such as the average path length. Since the probability distribution of such features are often not well known, the permutation test is frequently used, which is not necessarily exact or effective. Here, we apply the proposed combinatorial inference for testing the shape differences of MST.

For a graph with p nodes, MST is often constructed using Kruskal’s algorithm, which is a greedy algorithm with runtime O(plogp). The algorithm starts with an edge with the smallest weight. Then add an edge with the next smallest weight. This sequential process continues while avoiding a loop and generates a spanning tree with the smallest total edge weights. Thus, the edge weights in MST correspond to the order, in which the edges are added in the construction of MST. Let M1 and M2 be the MST corresponding to p×p connectivity matrices C1 and C2. We are interested in testing hypotheses

For validation and comparisons, we simulated the random graphs with the ground truth. We used p=40 nodes and n=10 images, which makes possible permutations to be exactly (10+1010)=184756 making the permutation test manageable. The data matrix Xn×p=(xij)=(x1,x2,⋯,xp) is simulated as standard normal in each component, i.e., xij∼N(0,1). or equivalently each column is multivariate normal xj∼N(0,I)

with identity matrix as the covariance.

with σ=0.1. Subsequently, the connectivity matrix C=(cij) is given by cij=corr(yi,yj). This introduces the block modular structure in the correlation network (Fig. 3). For 40 modules, each module consists of just 1 node, which is basically a network with 0 module.

Using (1), we simulated random networks with 4,5,8, 10 and 0 modules. For each network, we obtained MST and computed the distance D between networks. We computed the p-value using the combinatorial method. In comparison, we performed the permutation tests by permuting the group labels and generating 0.1, 0.5 and 1% of every possible permutation. The procedures are repeated 100 times and the average results are reported in Table 1.

Subjects. The method is applied to 111 twin pairs of diffusion weighted images (DWI). Participants were part of the Wisconsin Twin Project [2]

. 58 monozygotic (MZ) and 53 same-sex dizygotic (DZ) twins were used in the analysis. We are interested in knowing the extent of the genetic influence on the structural brain network of these participants and determining its statistical significance between MZ- and DZ-twins. Twins were scanned in a 3.0 Tesla GE Discovery MR750 scanner with a 32-channel receive-only head coil. Diffusion tensor imaging (DTI) was performed using a three-shell diffusion-weighted, spin-echo, echo-planar imaging sequence. A total of 6 non-DWI (b=0 s

FSL were used to correct for eddy current related distortions, head motion and field inhomogeneity. Estimation of the diffusion tensors at each voxel was performed using non-linear tensor estimation in CAMINO. DTI-TK was used for constructing the study-specific template

[3]. Spatial normalization was performed for tensor-based white matter alignment using a non-parametric diffeomorphic registration method [11]. Each subject’s tractography was constructed in the study template space using the streamline method, and tracts were terminated at FA-value less than 0.2 and deflection angle greater than 60 degree [4]. Anatomical Automatic Labeling (AAL) with p=116 parcellations were used to construct p×p structural connectivity matrix that counts the number of white matter fiber tracts between the parcellations [8].

Exact combinatorial inference. From the individual structural connectivity matrices, we computed pairwise twin correlations in each group using Spearman’s correlation. The resulting twin correlations matrices CMZ and CDZ (edge weights in Fig. 4) were used to compute the heritability index (HI) through Falconer’s formula, which determines the amount of variation due to genetic influence in a population: HI=2(CMZ−CDZ) [1]. Although HI provides quantitative measure of heritability, it is not clear if it is statistically significant. We tested the significance of HI by testing the equality of CMZ and CDZ. We used 1−CMZ and 1−CDZ as edge weights in finding MST using Kruskal’s algorithm. This is equivalent to using CMZ and CDZ as edge weights in finding the maximum spanning trees. Fig. 4 plot shows how the number of nodes increase as the edges are added into the MST construction. At the same edge weights, MZ-twins are more connected than DZ-twins in MST. This implies MZ-twins are connected less in lower correlations and connected more in higher correlations.

Results. At edge weight 0.75, which is the maximum gap and corresponding to correlation 0.25, the observed distance D was 46. The corresponding p-value was computed as P(D≥46)=1.57×10−8. The localized regions of brain that genetically contribute the most can also be identified by identifying the nodes of connections around edge weight 0.75 (0.75±0.2). The following AAL regions are identified as the region of statistically significant MST differences: Frontal-Mid-L, Frontal-Mid-R, Frontal-Inf-Oper-R, Rolandic-Oper-R, Olfactory-L, Frontal-Sup-Medial-L, Frontal-Sup-Medial-R, Occipital-Inf-L, SupraMarginal-R, Precuneus-R, Caudate-L, Putamen-L, Temporal-Pole-Sup-L, Temporal-Pole-Sup-R, Temporal-Pole-Mid-R, Cerebelum-Crus2-R, Cerebelum-8-R, Vermis-8 (Fig. 5). The identified frontal and temporal regions are overlapping with the previous MRI-based twin study [7].

We presented the novel exact combinatorial inference method that outperforms the traditional permutation test. The main innovation of the method is that it works for any monotone features. Given any two sets of measurements, all it requires is to sort them and we can apply the method. Thus, the method can be applied to wide variety of applications. For this study, we have shown how to apply the method in testing the shape differences in MST of the structural brain networks. The method was further utilized in localizing brain regions influencing such differences.

In graphs, there are many monotone functions including the number of connected components, total node degrees and the sorted eigenvalues of graph Laplacians. These monotone functions can all be used in the proposed combinatorial inference. The proposed method is also equally applicable to wide variety of monotonically decreasing graph features such as the largest connected components